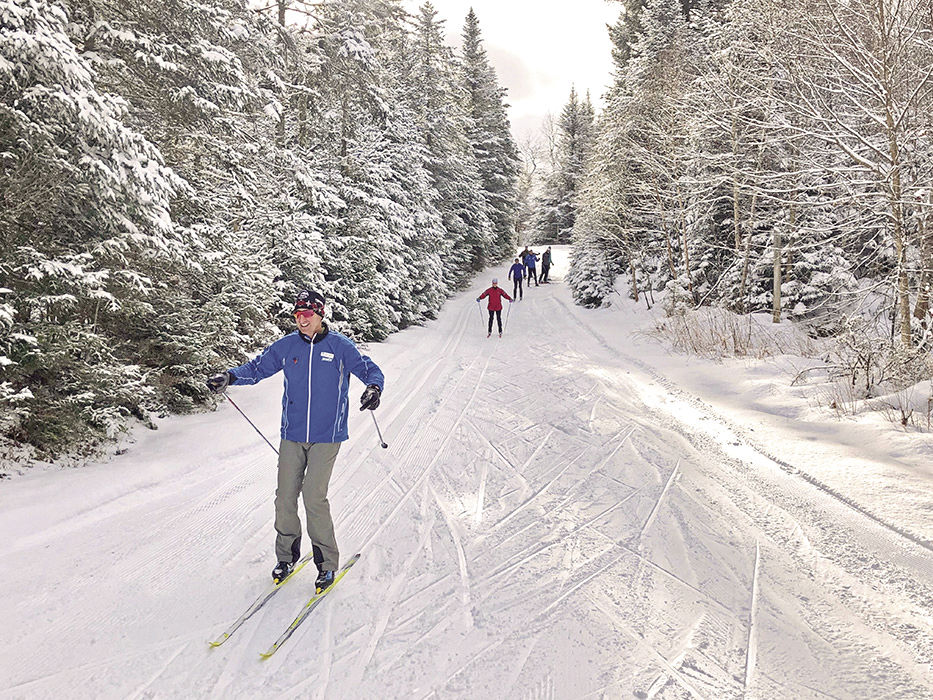 Bretton Woods skiers have some fun in the new snow on Tuesday. Bretton Woods Nordic got 6 inches of snow from the latest storm. (COURTESY PHOTO) 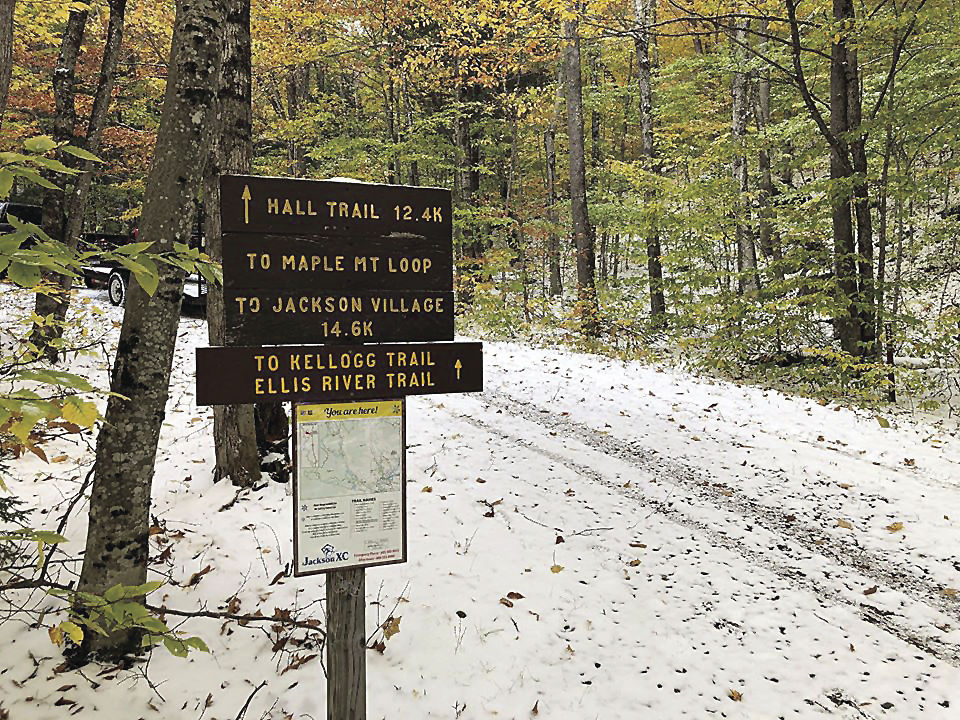 In October, marginal trail conditions like this should send skiers back home to wait for more snow. (COURTESY PHOTO) 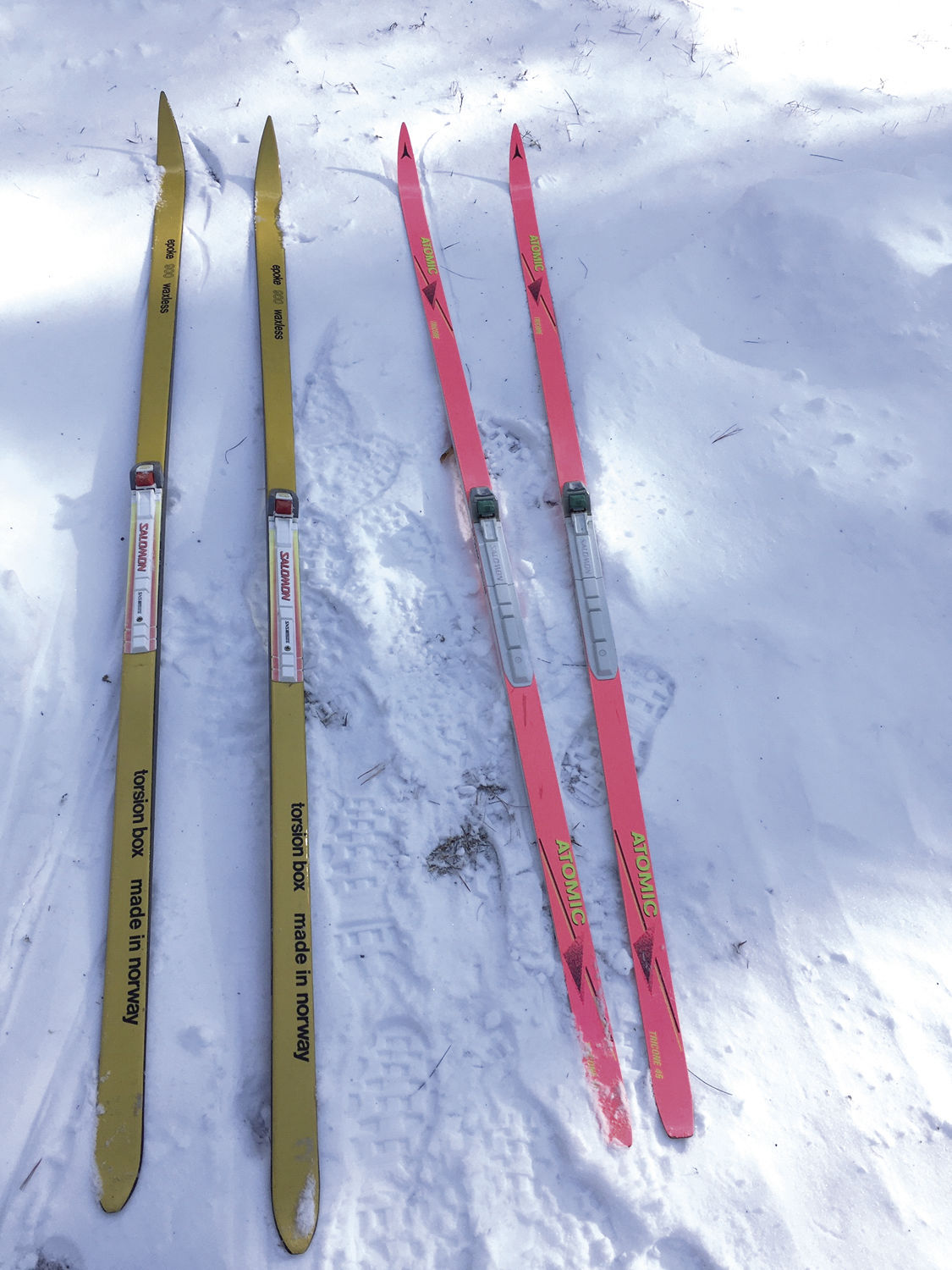 These "rock" skis aren't pretty, but they sure are durable. Note how shallow the snow is — not enough even for them. (SALLY MCMURDO PHOTO) 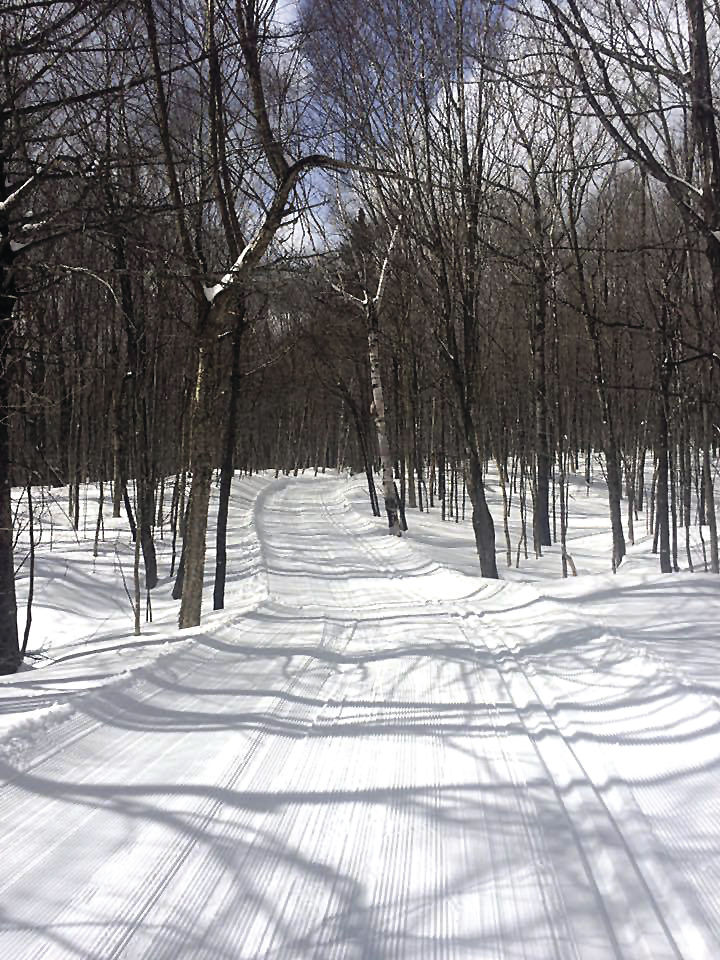 Cross-country skiers love to ski on well-covered and nicely groomed trails like these from last winter in Jackson. (COURTESY PHOTO) 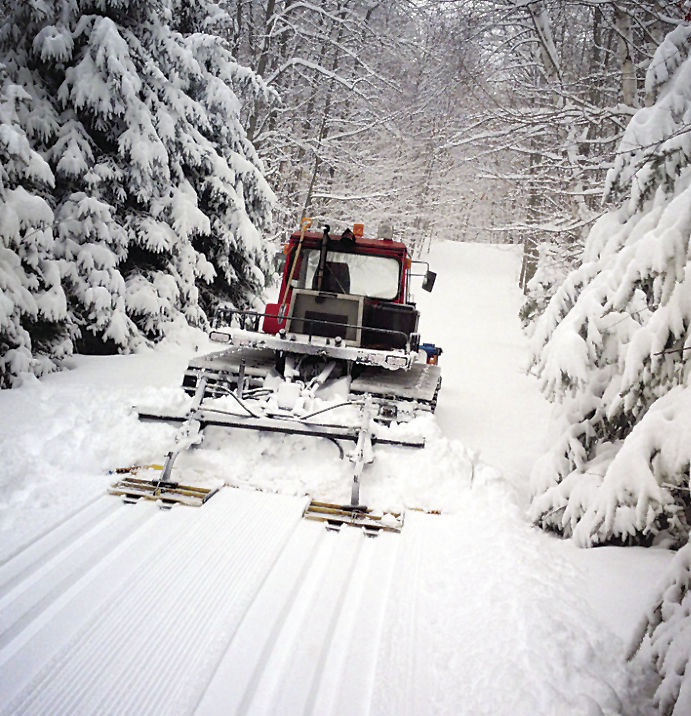 Bretton Woods skiers have some fun in the new snow on Tuesday. Bretton Woods Nordic got 6 inches of snow from the latest storm. (COURTESY PHOTO)

In October, marginal trail conditions like this should send skiers back home to wait for more snow. (COURTESY PHOTO)

These "rock" skis aren't pretty, but they sure are durable. Note how shallow the snow is — not enough even for them. (SALLY MCMURDO PHOTO)

Cross-country skiers love to ski on well-covered and nicely groomed trails like these from last winter in Jackson. (COURTESY PHOTO)

Tuesday’s snowstorm whetted my appetite for more snow. The fluffy white powder made a beautiful coating on the landscape but it wasn’t enough for me to risk damaging my skis.

With very little base left after the last rainstorm, I knew it wouldn’t take much skiing to break through the snow and hit dirt and rocks. Even my oldest rock skis deserve better treatment.

Before I retired in 2008, I worked in Gorham. Often on the drive home through Pinkham Notch, I’d stop at Rocky Branch parking lot for a late day ski. I'd ski up North Hall Trail as far as I could, given the declining daylight, then turn around and ski down. A quick little ski like that was just enough to recharge my batteries and improve my mood before heading home to my family.

One winter, early in December, with only a light covering of snow on North Hall, I ventured out on my bright pink Atomic no-wax skis. Though the skis were garish, they were fun skis, with good glide. I had “inherited” them from my son who got them in a ski trade in the late ’90s. They were too soft and short for him but just right for me. Those ugly skis were my favorite all-conditions, rock skis.

When you hear someone referring to their skis as “rock” skis, you know they’re not talking about the best skis in their quiver. Rock skis are often older, less expensive skis that skiers use when snow conditions are marginal. People pull them out in early winter and early spring. If they get a little dinged up from debris and rocks under the snow, the skier doesn’t get too upset — after all, they’re “rock” skis.

As I climbed the long ramp of North Hall that day, I noticed the snow coverage was thin, but I thought it sufficient for skiing. It was — for climbing. However, when I turned around to ski back down, I discovered it really wasn’t enough for downhill gliding. I could hear and feel my skis scraping over rocks. Yikes. I did what I could to minimize the damage, but I knew it wasn’t going to be pretty. If it wasn’t late and getting dark, and I wasn’t so stubborn, I could have taken them off and walked back to the car. But I didn’t.

Back home, I took the skis inside to examine the damage. Deep grooves had been stone-carved into the base. Splintery wisps of P-Tex stuck out on the sides. My husband/ski tech pronounce them “trashed!” I still thought they were usable — after all, they were “rock” skis — but he convinced me to take them to the dump. I’m still missing those obnoxiously pink skis.

A few years later, I found another pair of the same skis at a ski swap. I quickly grabbed them, excited to be replacing my old favorites. However, though they were the same make and hideous color, they didn’t ski the same. They were slightly longer and the camber was different. They didn’t climb or glide as well as I remembered the others doing, but they’ll do for “rock” skis.

The pinkies are waiting in the garage for more snow. If I took them out now, I’d only ski on snow-covered grassy fields. I’d stay off of snow-covered roads and trails where rocks and sand wait just below the surface to gouge my skis. It’s not really worth it to destroy another pair of skis because I’m impatient to go skiing. I’ll wait for more snow.

How much snow is enough? That depends on the ground surface, the type of snow, and how much you value your skis. When I Googled that question, I found varying responses. On this site, tinyurl.com/rbyozra, “Tinman” responded that he wouldn’t use good skis on 4-5 inches because he might get chips in the base that couldn’t be fixed. He’d only use good skis on 8 inches or more. ”Citizen Runner,” said if you’re skiing on grass like on a golf course, a few inches might be enough. Where there are rocks and roots, “don’t bother skiing or snowshoeing on anything under 6 inches.”

Light, fluffy snow like the snow we had this week is nice if there’s enough base underneath to cover the rocks. The 3 inches in my yard are not enough for me to try skiing yet. However, in higher elevations where there might be more base and snow on top, it might be worth it. Several local Nordic centers have groomed and opened up those trails, but with advisories to evaluate conditions as you ski.

Jackson Ski Touring posted on their ski report that they had groomed with piston bully up at Prospect Farm and Valley Cross/Wave are with the small machine. At Prospect Farm, “the groomers have worked their best to bond the new snow to the base, but it’s never a bad idea to “mind the base.” In other words, pay attention to the conditions underfoot, and ski accordingly. Don’t take your best skis yet and remove skis when the going gets rough.

Great Glen Trails Snow Report and Trail Condition page show 2K tracked and 10K skate groomed and variable conditions on some trails. They are expecting more snow and they also can make snow, so conditions may improve. The report, “We are open, happy and skiing more fresh snow today!”

Looking at Mount Washington Valley Ski Touring, Bear Notch Ski Touring, and Purity Springs XC and Snowshoe Reserve’s websites, I didn’t see evidence of recent grooming on their trails. Purity Springs says they don’t have enough snow yet to groom. MWVST told a similar story. Their trails are open, but not groomed. They’re telling people, “Ski at your own risk.”

For now, I’ve pushed my “patience” button. I’m keeping my precious pink skis protected from marginal conditions. I’ll venture out in the woods today in my snow boots, but I’ll wait for a little more snow before I cross country ski or snowshoe.

Sally McMurdo is currently a cross country ski instructor at Jackson Ski Touring Foundation. For almost four decades, she has explored New England’s groomed and ungroomed trails on all kinds of skis.