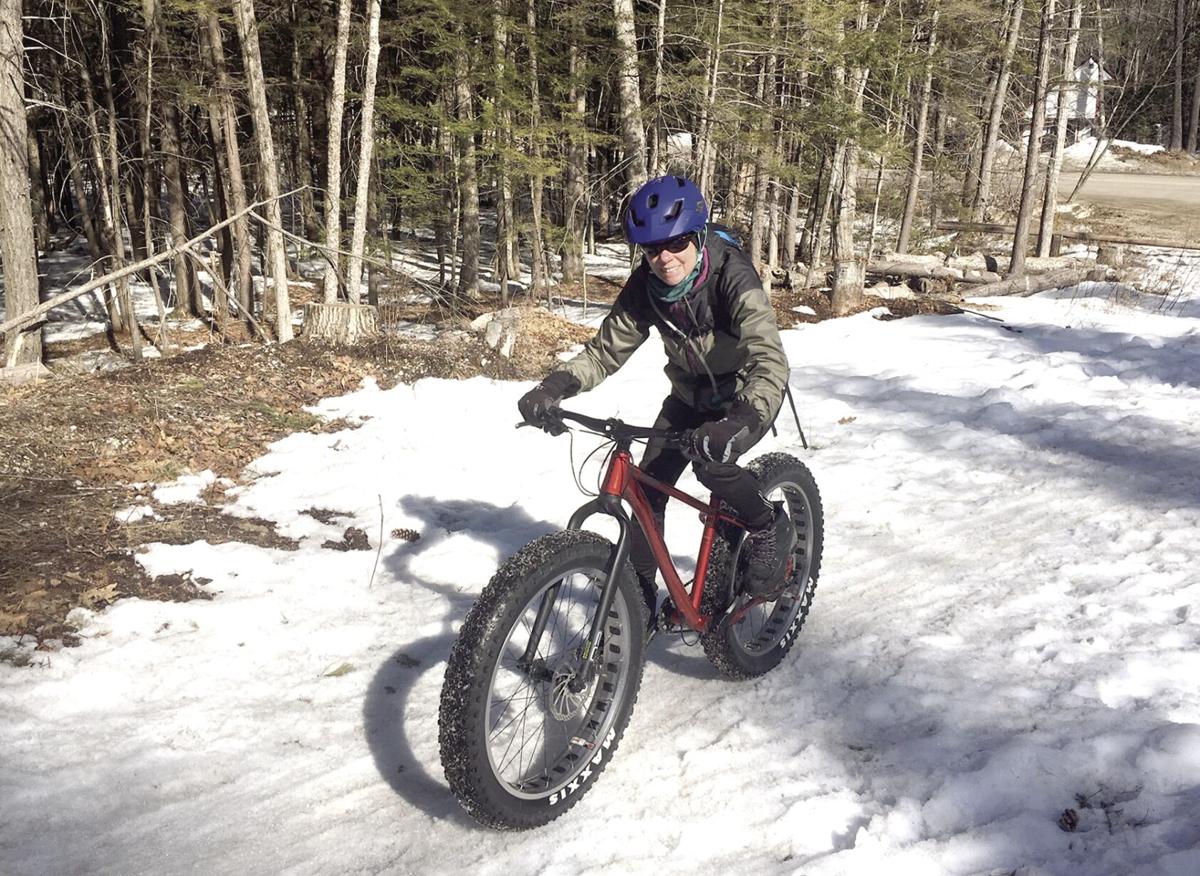 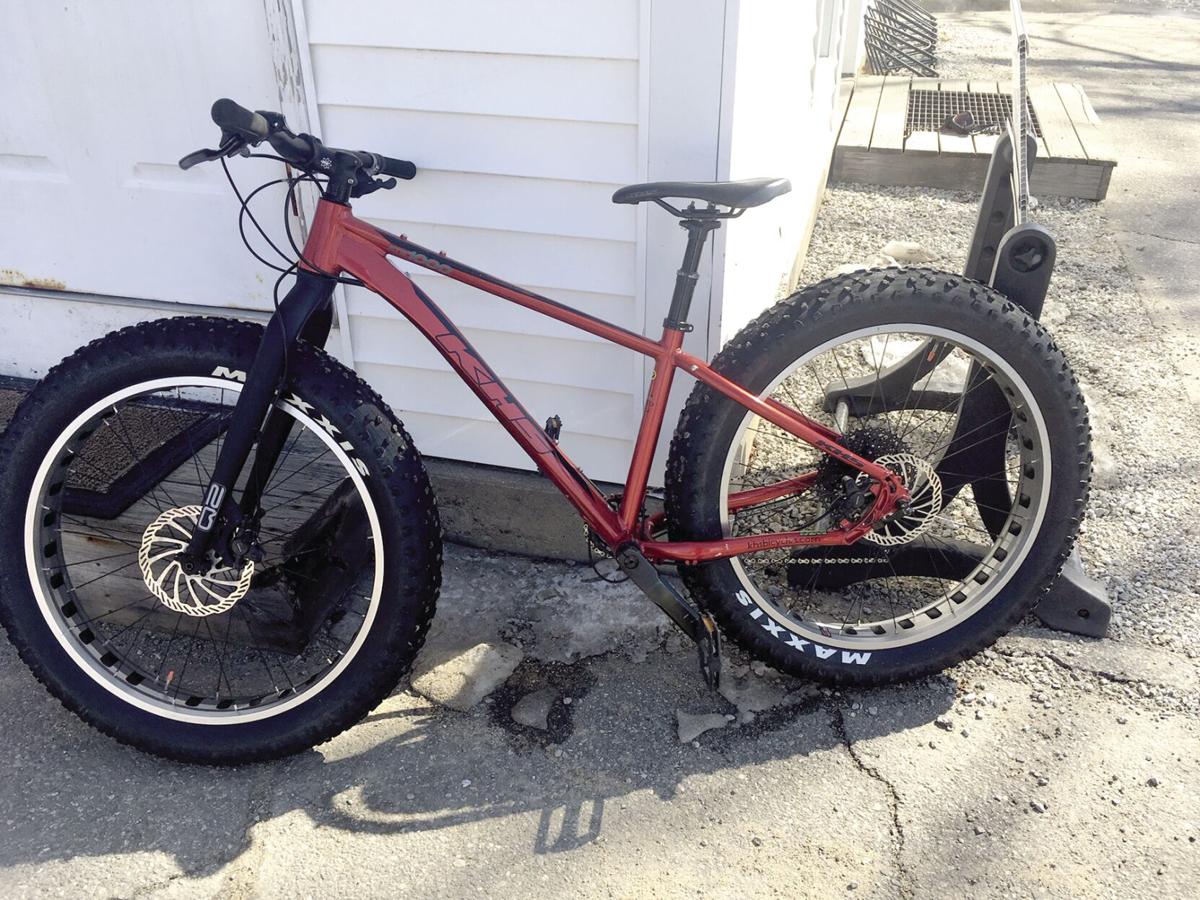 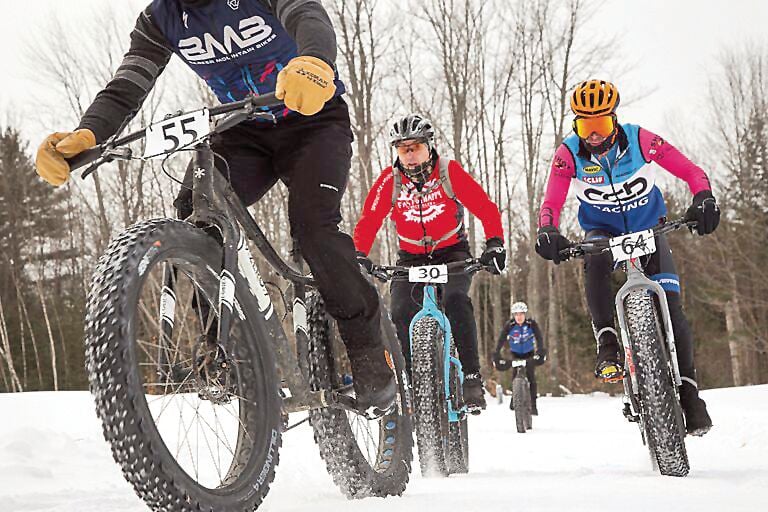 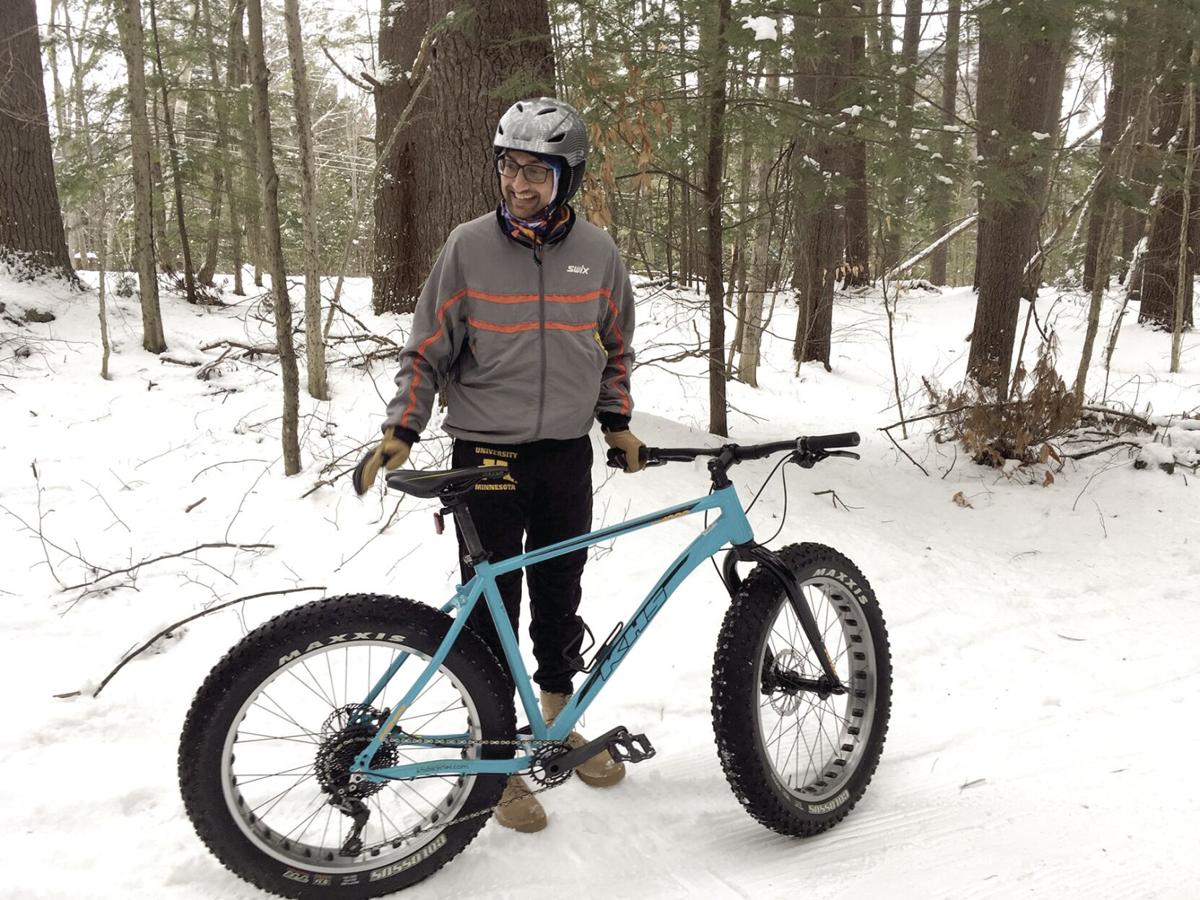 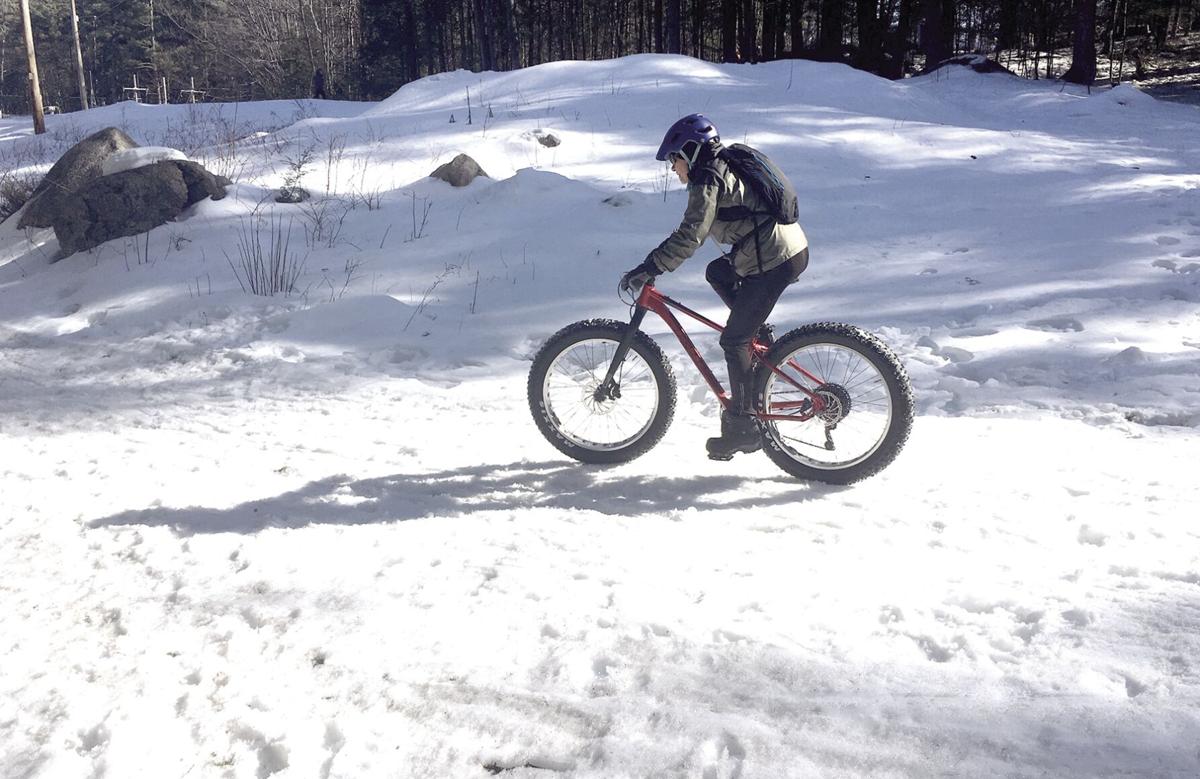 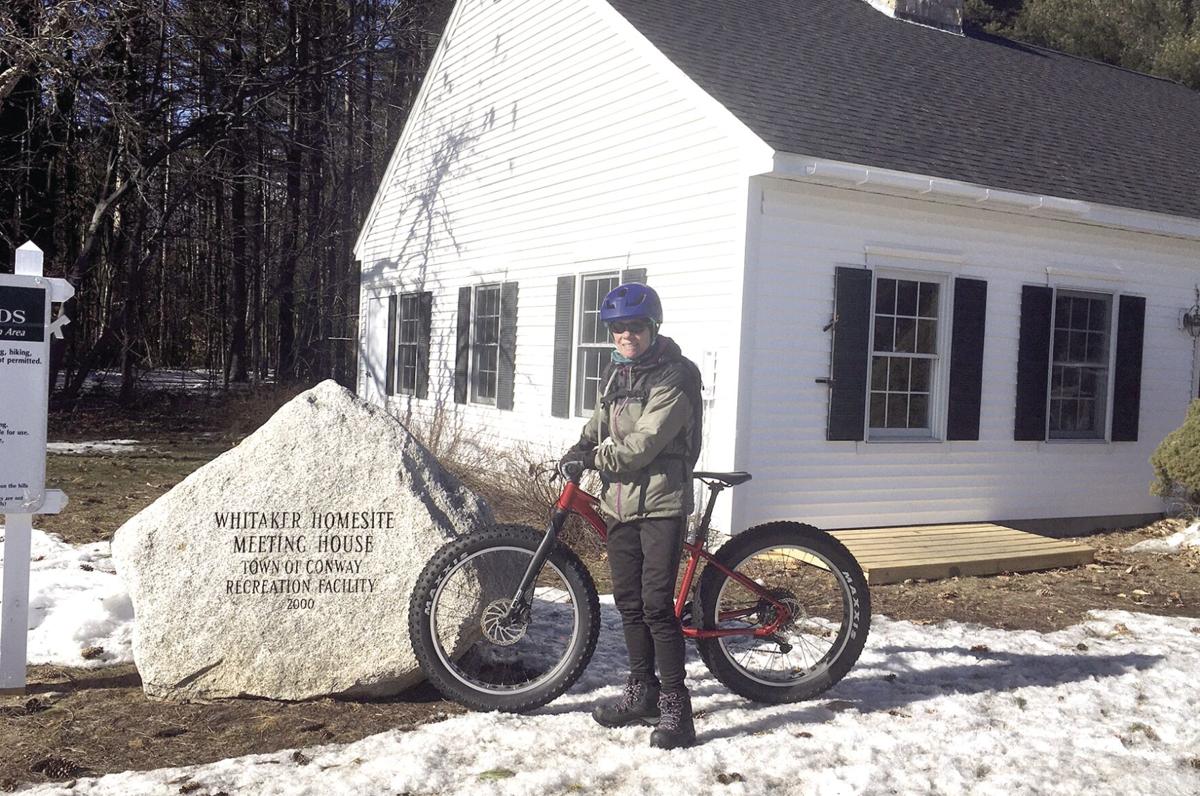 This year, I’ve had many students tell me they signed up for cross-country ski lessons because they wanted to try “something new.” Alpine skiers decide to try Nordic skiing. Classic skiers were curious about skate skiing. People showed up to see what gliding was all about.

Last week, I decided it was time I tried something new. I’ve classic, skate, downhill and backcountry skied for years. It was time to try something I hadn’t done before — ride a fat bike in winter.

There are so many options for getting outside to play and exercise in winter-skiing, snowboarding, snowshoeing, snowmobiling and ice skating. Add to that list, winter biking.

There’s a growing number of people who have added cold-weather biking to their winter repertoire. Many warm weather cyclists now bundle up and ride bikes in winter. Some add studded tires to mountain bikes for traction in slippery conditions. Others will saddle up fat bikes and take them out on trails and frozen lakes.

What is a fat bike? That term was first used in 2001 by Mark Gronewald, owner of Wildfire Designs in Palmer, Alaska, as a name for his big, oversized tired bikes. However, the history of the fat bike goes back further than that.

In the 1980s, in Alaska and New Mexico, cyclists were looking for bikes that could handle riding on snow and ice or in desert sand. They needed bikes with more surface contact and traction.

In Anchorage, Alaska, Steve Baker with Icycle Bicycles experimented with welding two and three rims together to get that traction and built custom frames and forks to accommodate wider tire combinations. In 1989, riders rode these “fat tire bikes” the 1000 mile length of the Iditarod Trail!

Meanwhile, in New Mexico, Ray Moilna used Remolina 3.1-inch rims, 3.5-inch tires, and frames to fit them in his guided tour business across the soft sand of Mexican and Southwest arroyos and dunes.

In 1999, Gronewald met Molina and rode one of his fat-tire bikes. Gronewald and frame builder, John Evingson, then designed and built frames to use with Molina’s rims. They began producing their own separate lines of “fat-tires” bikes in 2000.

Today, a fat bike is defined by the size of its tires and rims. Tires widths are 3.8in (97 mm), up to 5 inches on some models. The rim widths range from 2.16 in (55mm) or wider. Frames and forks are wider to accommodate the fat tires. Some fat bike tires are mounted on 26-inch wheels and some on 27.5-inch wheels, but combined with large tires, the overall size is more like a 29-inch wheel.

The secret to the fat tire ride and traction is tire inflation. These tires can be used with inflation as low as 5 psi to 15 psi. The low inflation makes for a smoother ride over obstacles. For this reason, many fat bikes are hardtails or just have front suspension. Fat tires cushion the ride. Wider tires and low inflation allow for more flotation and traction for riding over snow or sand.

Though fat bikes are also well-suited for riding diverse terrain like bogs, pavement or traditional mountain bike trails. As Mount Washington Ski Touring states on its website, “These bikes turn mountains into molehills by making the most challenging and technical terrain much easier to ride. Your ride is less rigid and more comfortable whether you are riding on snow in winter or rolling over roots, rocks and logs the rest of the year.”

It’s easy to see why fat bikes have become so popular. They can go almost anywhere comfortably.

Saturday, I read MWVST’s snow report that all Whitaker Woods trails were open to fat bikes. It was the day to try something new. Fat biking was on my mind. All I needed was to rent one close by.

I discovered Great American Ski Rentals/Red Jersey Cyclery had fat bikes to rent. When I didn’t have any luck with online booking, I called (603) 356-7520. There was one available in my size that afternoon. Quickly, I reserved one for $29.

As I was preparing to go for my ride, I wondered what to wear. I don’t usually bike in winter, but I did have thick bike tights I could wear over a pair of bike shorts. I layered up the top with windproof, lined shell and two layers underneath. I grabbed my lobster mitts, wool hat and balaclava. I took both my bike and ski helmets so I had options if it was cold.

What to wear on my feet? Peter (Minnich, my husband) suggested winter boots and warm socks. A Camelback completed my outfit.

At Red Jersey, I picked up a bright red aluminum KHS 1000 fat bike with 4.8-inch tires, drop seat post and flat pedals. It looked like a tank! Riding to Whitaker, it felt like one, too. Getting it up to speed on the flats took some pedaling, but once it was going, it rolled!

In the ball field, I discovered it didn’t “float” through slush. I got off and pushed. On firm ground, it moved right along, but the ride was bumpy over frozen footprints. I was overinflated but didn’t want to mess with tire pressure.

I lost momentum climbing Lucy’s Traverse and had to walk it up. I quickly learned how to adjust my weight and gears to climb better. I also learned when you step off the bike on icy patches, your foot slips. The tires grip better than my boots did. I wondered — do winter fat bikers ever wear spikes?

The midday sun was warming up the Powerline trails, making them soft. I was sinking in too much. I ducked into shady woods to try Upper Perimeter, a single track. That’s where I started having fun. The trail was well-packed down, giving me a solid riding surface. I got the hang of riding uphill and down and cornering. On that track, the bike was rolling. If I strayed off it, I sank and snow filled my boot. Note to self — next time, wear gaiters!

I finished my ride on a well-packed Bancroft Loop. I passed two other fat bikes with a dog in tow and received a compliment on my rig. Cruising back to Whitaker, I ended the ride with a smile.

Will I ride a fat bike again? Yes, probably, given the right conditions. It might be fun to rent one at Great Glen or Bretton Woods to try their trails. In a low snow or icy winter, fat bikes could be a great alternative for winter exercise. In warm weather, they smoothly roll over rocks and roots.

Would I buy one? Probably not right now. Most local bike shops I talked to couldn’t even get them in stock this year because of COVID-19 pandemic production problems. My bike rack would need a wider tray and I’d have to find room in the garage for another bike. I’m not ready for that “big” a commitment.

I had a good time riding a fat bike and will ride one again. If you also want to “try something new,” consider renting one from Red Jersey, Great Glen or Bretton Woods. Give fat bikes a ride.

For more information about fat bikes:

Eight reasons why you should buy a fat tire bike: tinyurl.com/un427w5f.