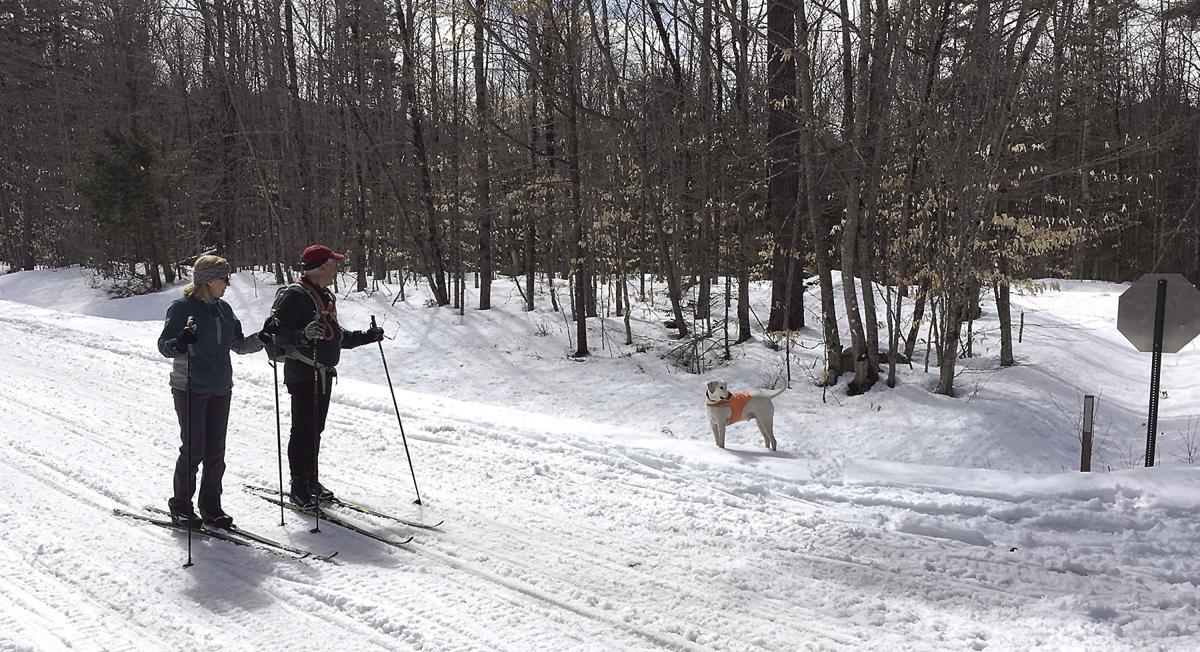 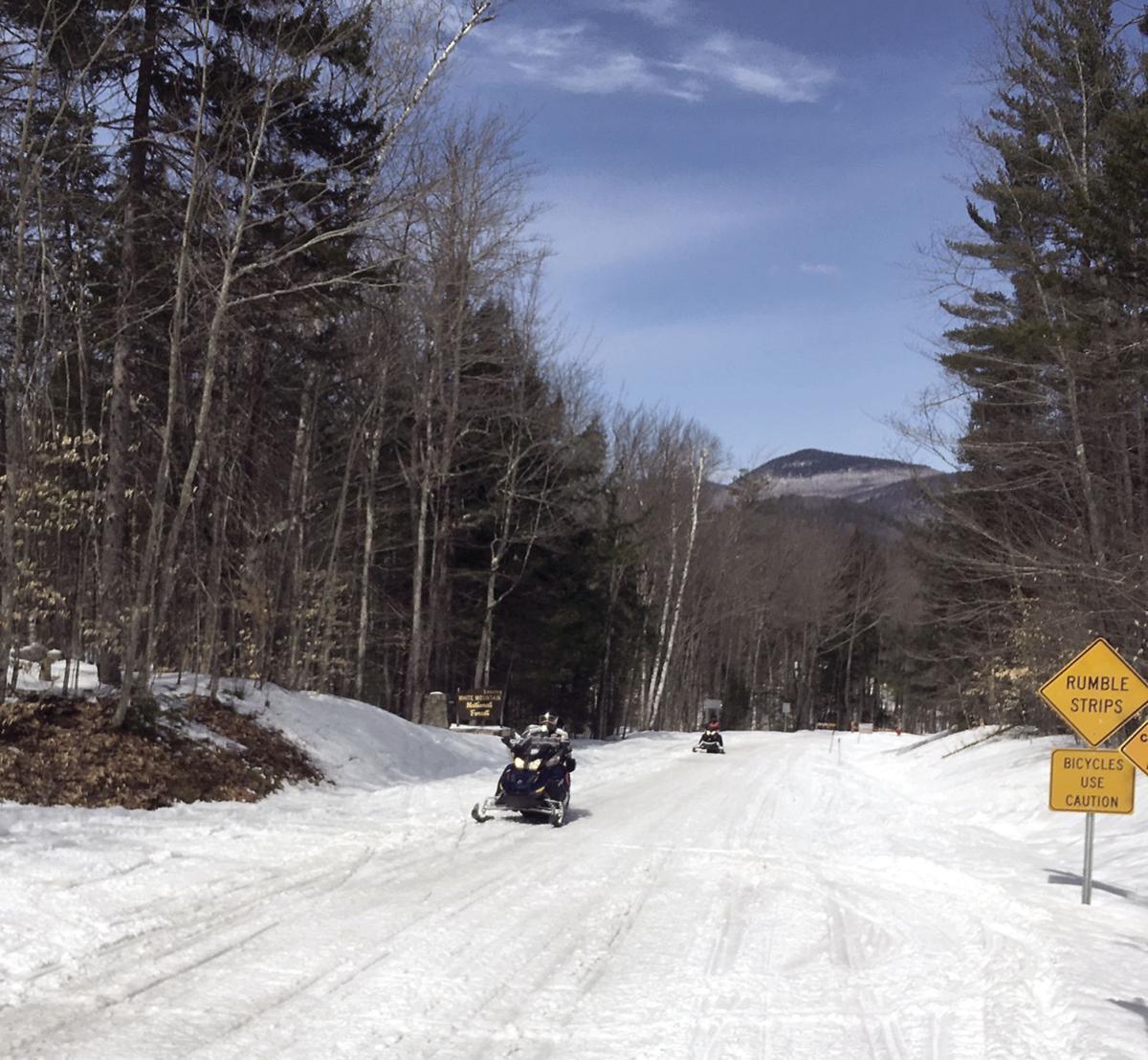 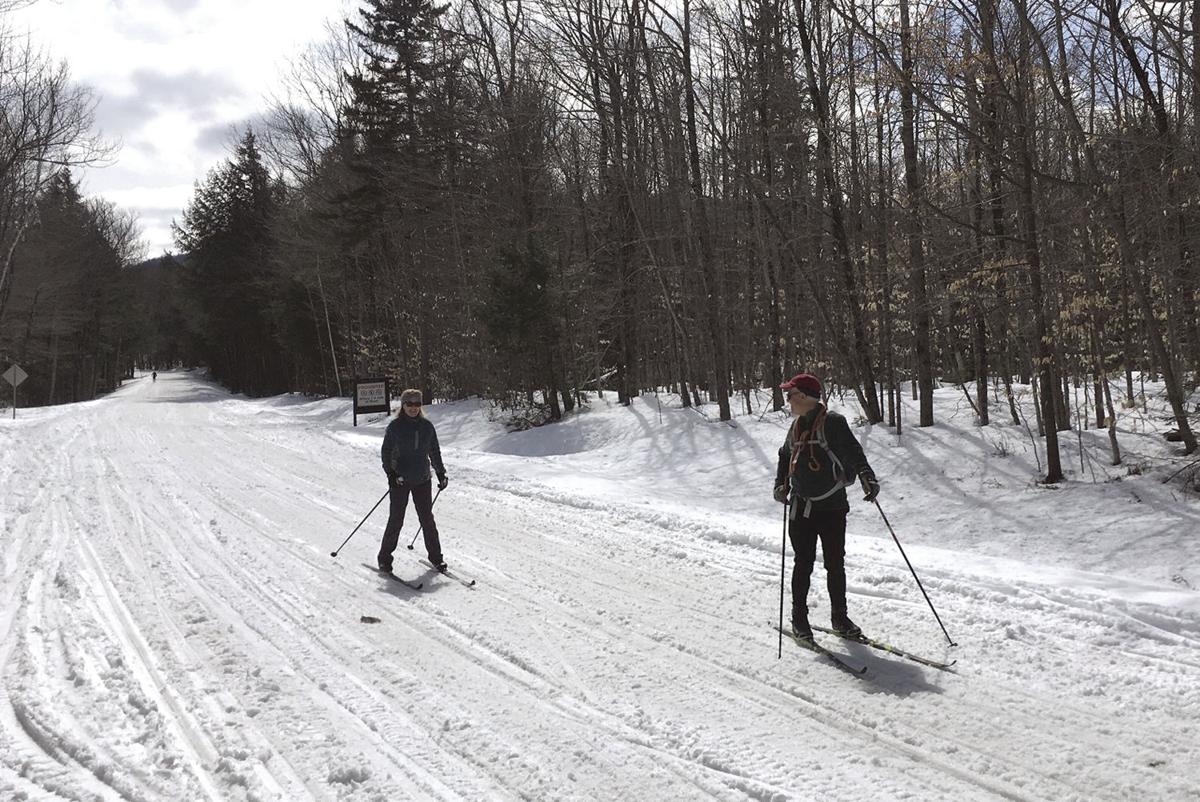 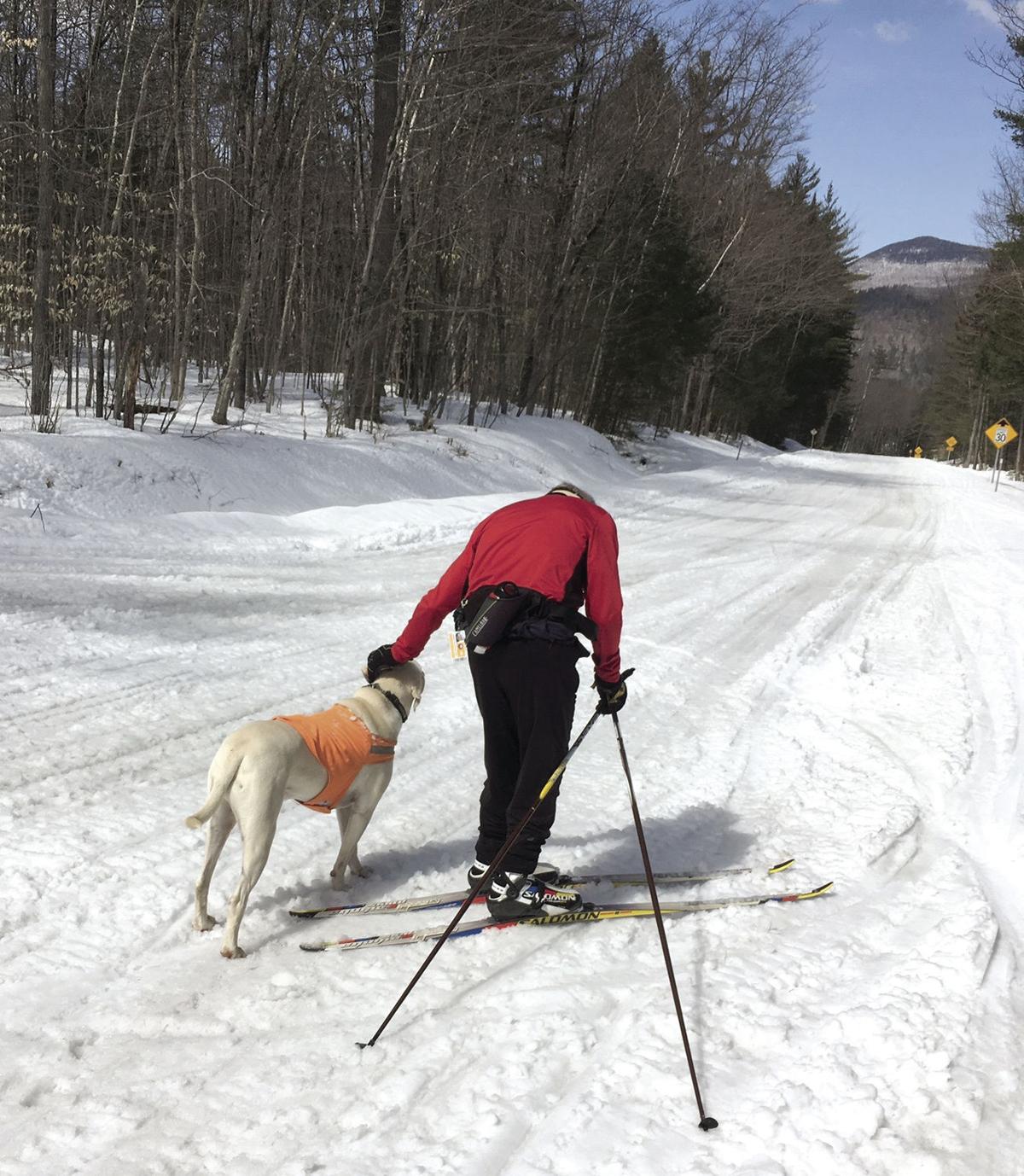 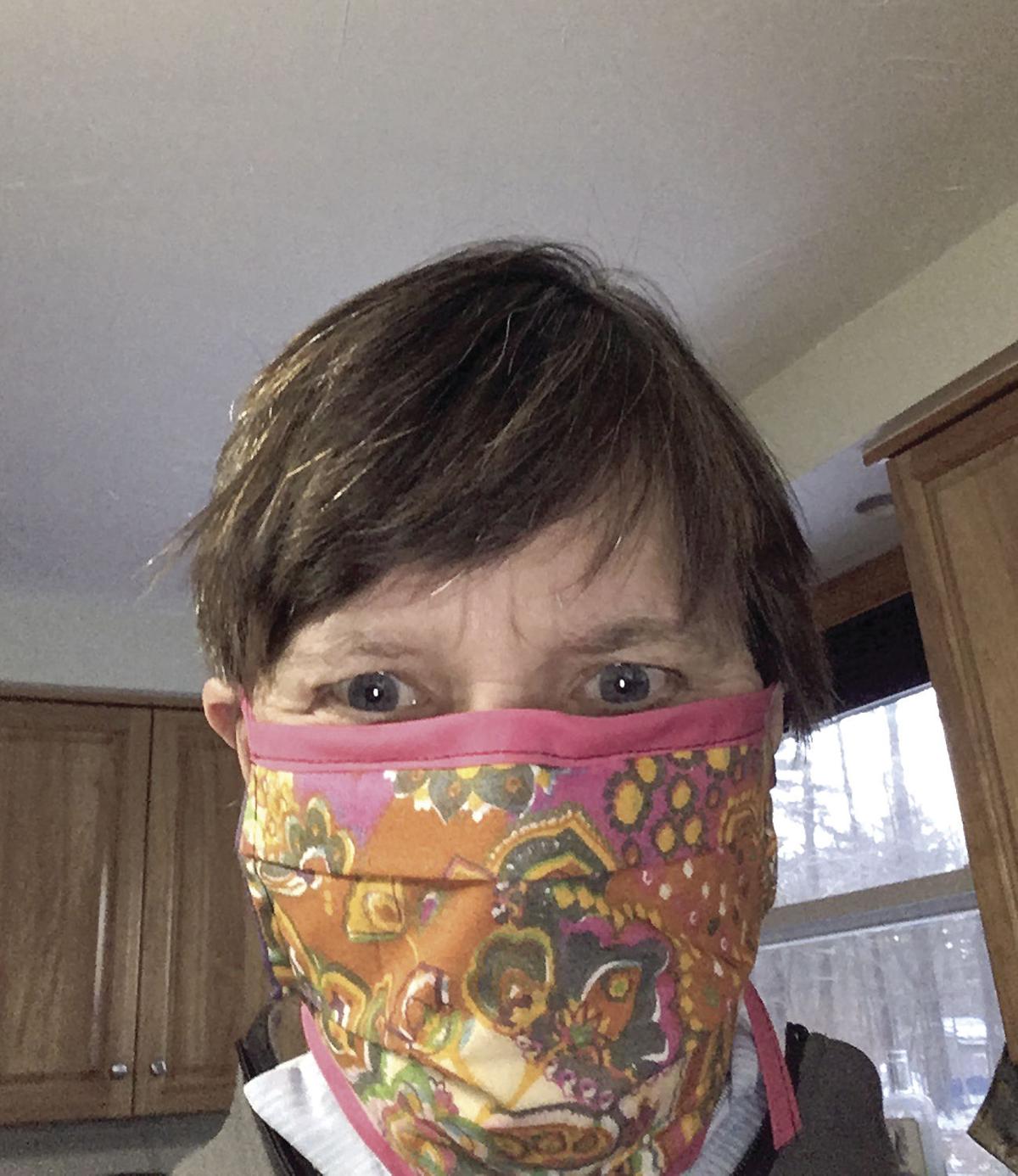 Thanks to the sewing and generosity of Deb Deschenes, Sally McMurdo is now outfitted with her own stylish face mask. “Don't I look like an angry COVID-19 bandit,” she asked. (SALLY MCMURDO PHOTO) 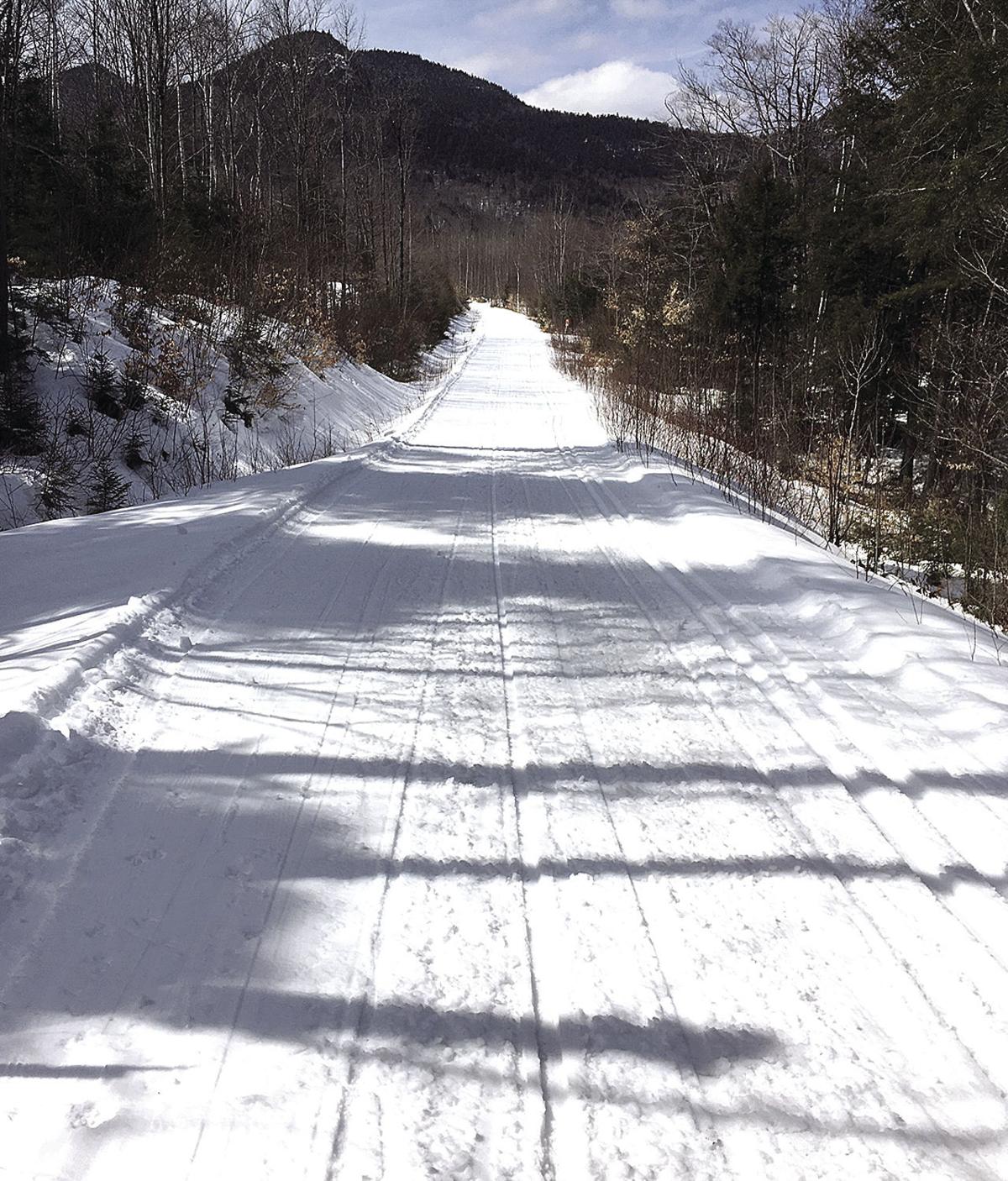 The Experimental Forest Road that links to Bear Notch Ski Touring Center trails was sunny and white, with no skiers in sight. (SALLY MCMURDO PHOTO)

Thanks to the sewing and generosity of Deb Deschenes, Sally McMurdo is now outfitted with her own stylish face mask. “Don't I look like an angry COVID-19 bandit,” she asked. (SALLY MCMURDO PHOTO)

The Experimental Forest Road that links to Bear Notch Ski Touring Center trails was sunny and white, with no skiers in sight. (SALLY MCMURDO PHOTO)

Driving up West Side Road Wednesday, I saw a couple of bicyclists cranking along. I looked at my car thermometer — mid-40s. That’s too cold for me. I prefer temperatures over 50-degrees for biking. Besides, I wanted to have at least one more ski.

On the radio, I heard Bear Notch Ski Touring’s advertisement state they had 9 inches of new snow from Tuesday’s storm on top of a good base. With colder overnight temperatures, they were able to groom their trails. They invited everyone to come ski, keeping social-distance, of course. I was on my way there for maybe my last ski of the season.

At the Bear Notch Touring Center, the office and warming hut was closed to the public. If you needed rentals, a sign said, “Knock on the door.”

There was a wooden box on the porch for donations for those who didn’t have a season’s pass. A trail map on top showed what had been groomed recently. The set-up was not as friendly as face-to-face contact but adequate for communicating what was going on. I put my money in the slot and drove to the parking lot out back.

There were quite a few cars in the parking lot, but I only saw one skier and we kept our distance. In the fields across the highway, I spied someone skate skiing. Those were the only skiers I saw for a long time.

That’s the beauty of cross-country skiing this time of year. Once you get away from the center, you can disappear into the woods. As I skied up Trail No. 7, I only saw tracks left by other skiers and dogs. I heard the sound of running brooks and birds singing in the trees. Spring sensations and fresh air were a reprieve from being inside too many days.

I expected to see people on Trail No. 2, but when I reached it, there was no one. Climbing the hill to the Experimental Forest Road, I felt the midday sun beating down. The snow was getting soft and I was getting hot. Near the water tower, I stopped by the Albany Brook Bridge to shed layers and put on Maxiglide. Off came a hat, jacket and gloves as I switched into springtime mode. A lightweight biking vest was all I wore over my shirt. Fingerless bike gloves gave my hands some padding. My headband kept my ears warm, but in the bright sun, I’d prefer a baseball cap instead to shade my face.

At Trail No. 5, I surveyed the scenery and views but saw no people. Where had all those skiers gone? Skiing down No. 5 to No. 40A, I turned right to ski toward Bear Notch Road. I was curious about the condition of that trail, the road and trails on the other side. The new snow made it very manageable. When I reached the concrete shack, I heard snowmobiles in the distance and the crunch of snow behind me as a skate skier caught up to me. He passed without a word and headed down the long, steep hill of Trail No. 40. I followed more cautiously, knowing that too much speed could spell disaster.

When I reached Bear Notch Road, I stopped to let snowmobilers pass. They were courteous, but noisy and smelly — not my choice of winter sport. Turning right, I skied up the road to check out trails on the other side. Trail No. 40 drops steeply down the hill to the Bartlett Brook Bridge. Snowmobile traffic on the hill had made it chunky, so I opted to sidestep down. I’m doing my best not to get hurt these days — I don’t want to go near a hospital!

Across the bridge, I turned right, skirting around an open patch and climbing toward Trail No. 42. I skied the lollipop loop, and found it in good shape, but saw no other skiers. Returning to Bear Notch Road, I spotted some skiers, dogs, a walker and snowmobilers. There were some people out there. People to photograph and talk to — I wasn’t isolated!

Skiers Dawn Canales and Mike Simoneau and I had a friendly conversation about skiing. Their 5-year-old dog Bryce came over and introduced himself, foregoing “social distancing!” Dawn and Mike told me they had skied Bear Notch from the Kancamagus side this past weekend and enjoyed it. Now, they were exploring its Bartlett side.

Nearby, an Experimental Forest Road headed back in the direction of the Bear Notch ski trails. I decided to take it. It’s a multi-use trail, with evidence of past snowmobile and ski traffic, but I saw neither. I turned right at the next junction, skied down past the water tank and linked up with Trail No. 5 again.

Trail No. 5 turned left into the woods and I followed it to Trail No. 22. With its twists and turns, it’s fun to ski in soft snow. At its end, I turned back uphill on No. 5, climbing back to the water tank and headed down the road to Trail No. 2.

I wanted to finish on that side of Albany Brook so I could avoid walking back on the highway. I didn’t realize the waterfall crossing was still open. If I had taken that, it would have cut out the extra climbing. Oh, well, it was a nice spring day to be out exercising.

Enjoying the downhill ski on No. 2, I arrived back at the center. A few people were just arriving to ski. At least a dozen cars were in the parking lot, but the skiers were scattered throughout the network.

Is this is my last ski of the season? It will be OK with me if it is. I had a fine time skiing at Bear Notch for 2 hours by myself in the warm sunshine. I might go out again to ski there or at Prospect, while other skiers are skinning up and skiing down closed downhill areas or heading up to Tuckerman’s. But, if the weather warms and the snow starts to go, there’s a bike in the basement calling me to go for a ride. It’s spring in New England — I’ll keep my options open.

I hope everyone is doing well and is healthy. Use all that family home time to get outside for fresh air exercise of any kind. It’ll lift your spirits!