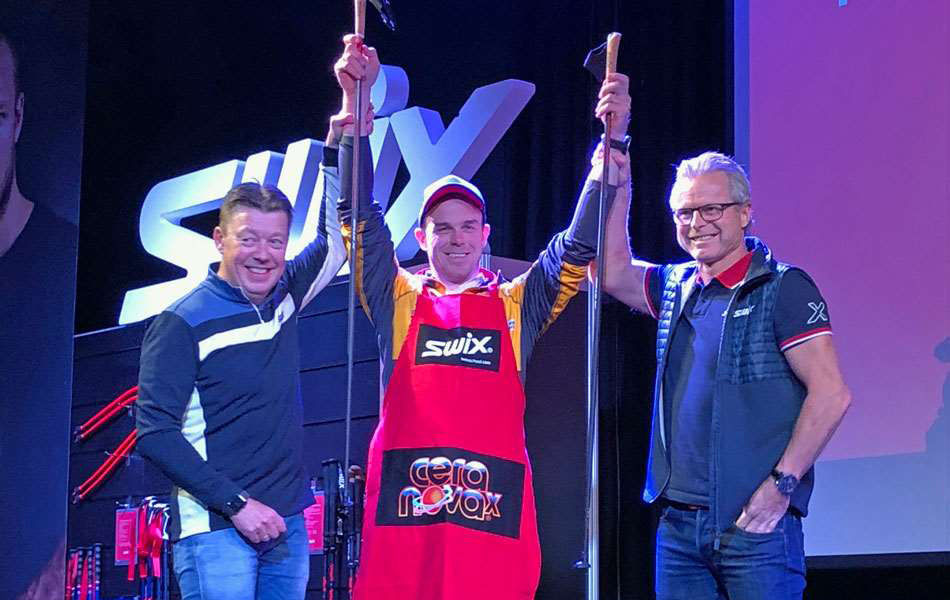 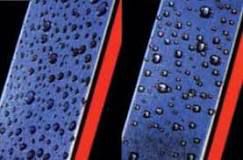 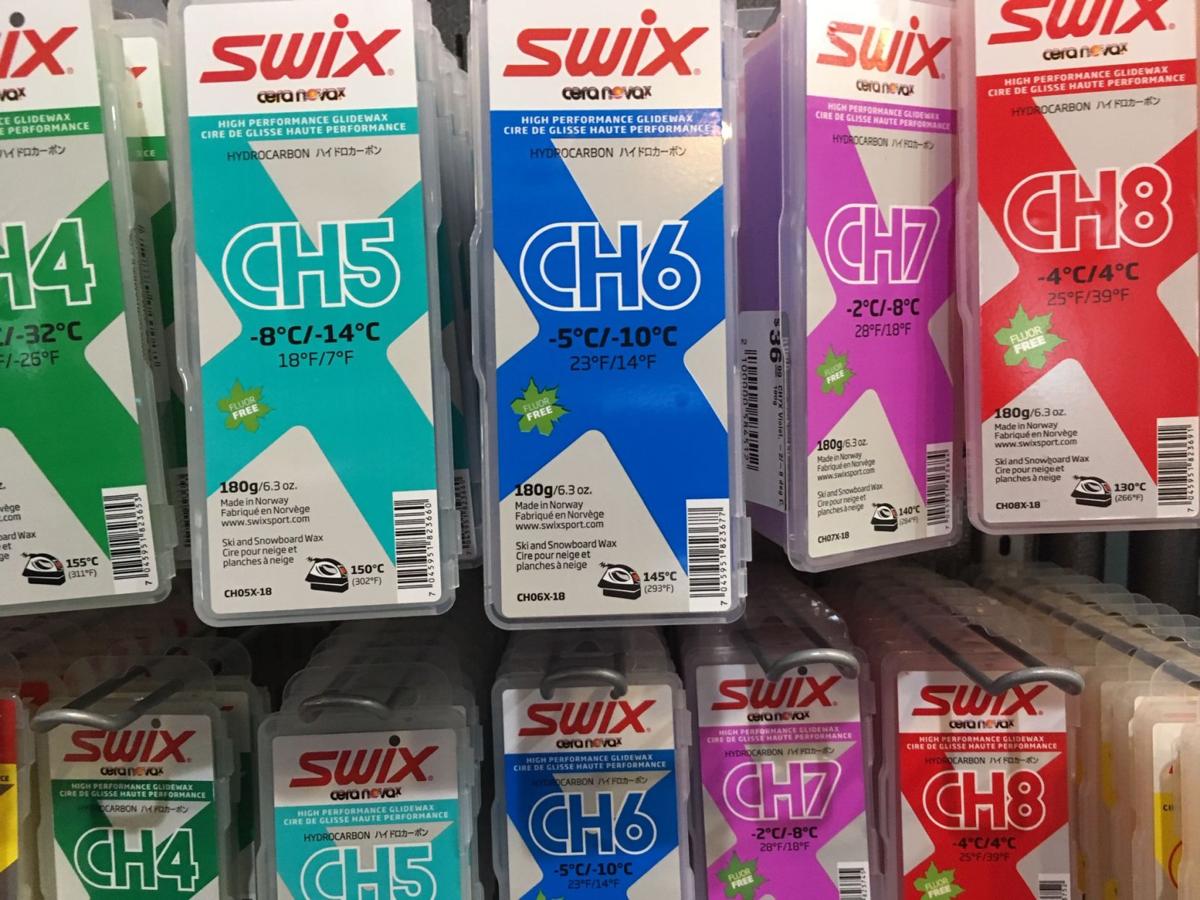 Gorham Bike and Ski's CHX (Hydrocarbons) waxes have a green label, indicating they are "fluoro-free" and not harmful to the environment. (COURTESY PHOTO) 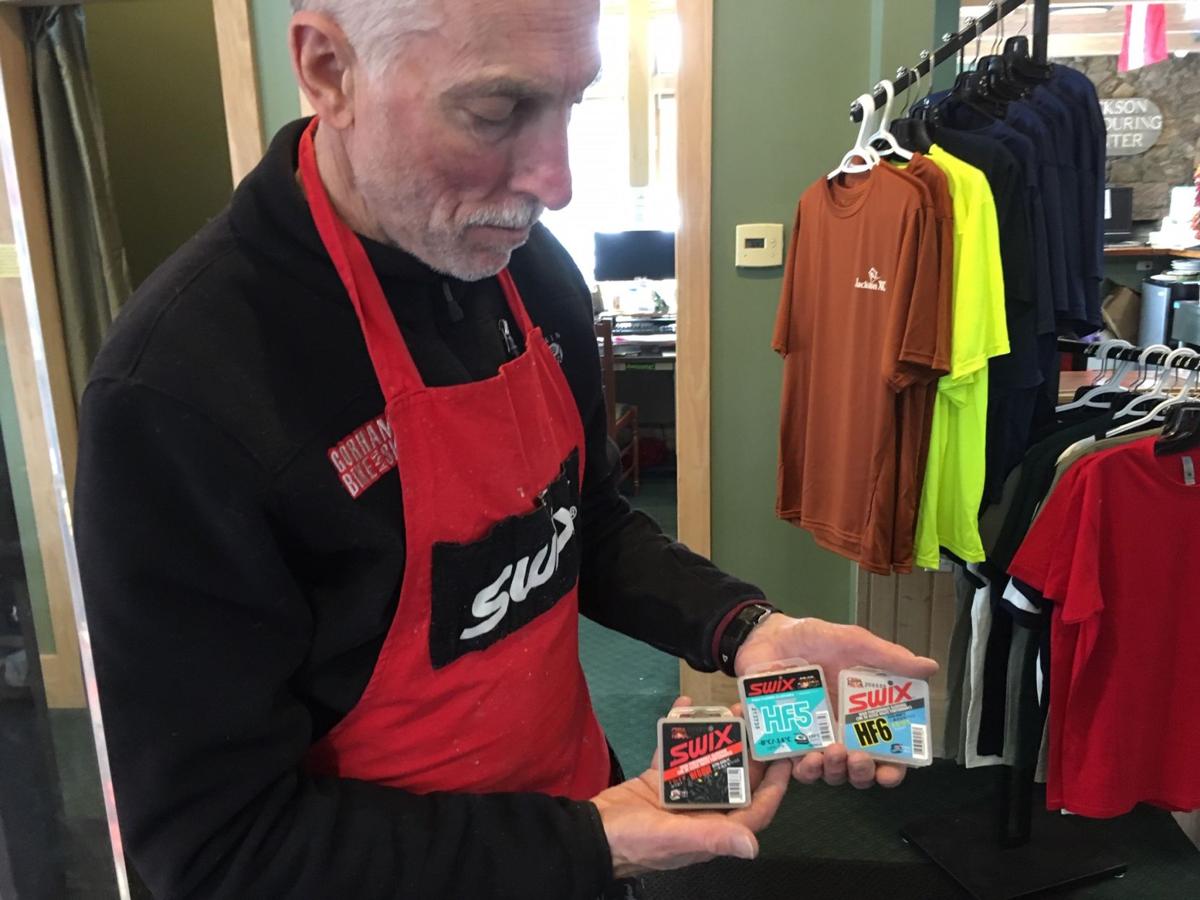 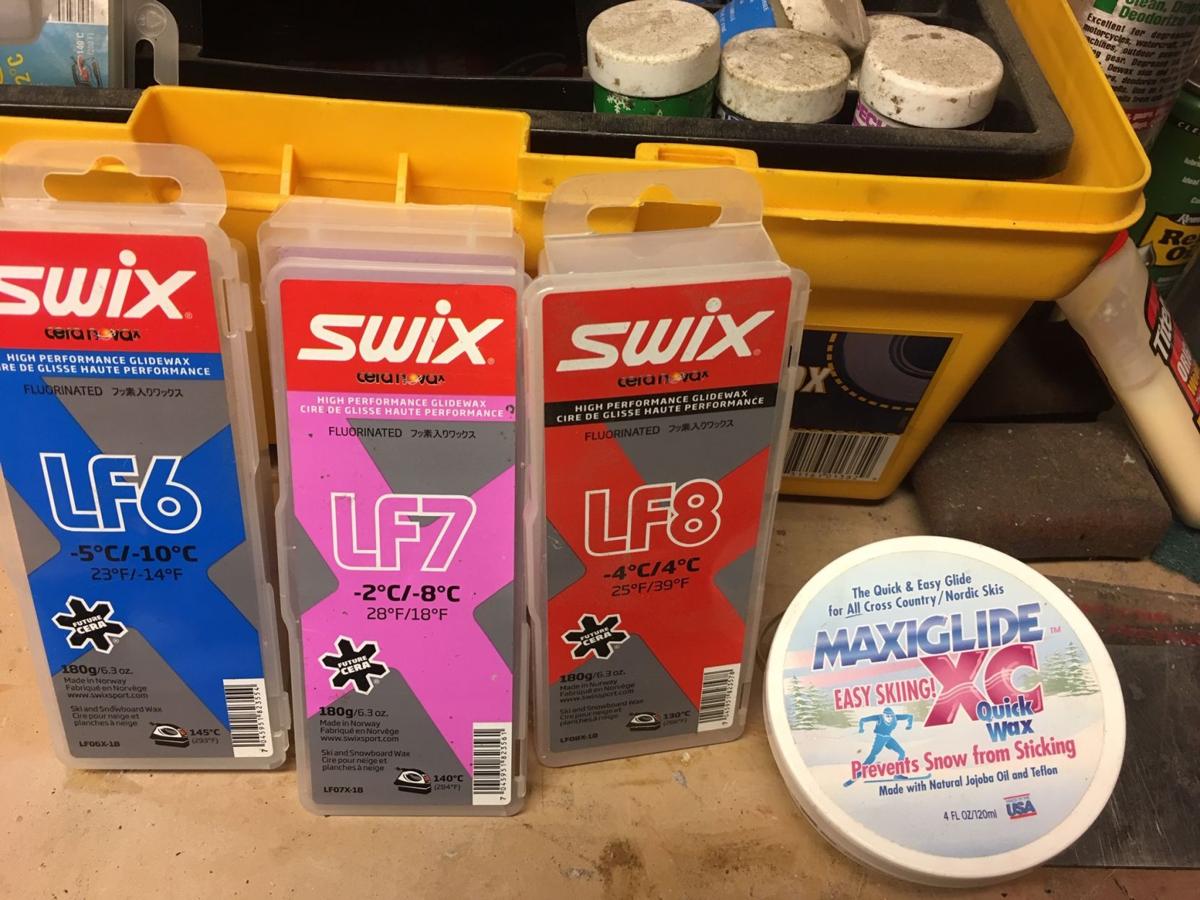 These products on the author's wax bench all contain fluorocarbons- even Maxi-Glide, which contains Teflon, also a fluorocarbon product. (COURTESY PHOTO)

Gorham Bike and Ski's CHX (Hydrocarbons) waxes have a green label, indicating they are "fluoro-free" and not harmful to the environment. (COURTESY PHOTO)

These products on the author's wax bench all contain fluorocarbons- even Maxi-Glide, which contains Teflon, also a fluorocarbon product. (COURTESY PHOTO)

When I think of cross-country skiing, I think of a healthy, environmentally-kind sport.

Skiing through snow-covered woods, I’m at “one with nature.” Appreciating its beauty, using non-motorized travel, how can I be potentially harming it?

It all depends on what I put on my skis. If I use a wax or product that contains a toxic element, I’m exposing the environment and myself to those toxins without even realizing it.

This is the problem at the center of the “war on wax” initiated by the EPA (Environmental Protection Agency) and its European counterpart, ECU (European Chemicals Agency).

Both agencies are working hard to eliminate the use of fluorocarbon waxes on skis.

What are fluorocarbons? A simple dictionary definition is “a compound formed by replacing one or more of the hydrogen atoms in a hydrocarbon with fluorine atoms.”

Fluorocarbon waxes were introduced into the skiing culture, both Alpine and Nordic, in late 1980s.

They so drastically changed the gliding properties of skis that Nat Brown, in his book, “The Complete Guide to Cross Country Ski Preparation,” devoted an entire chapter to discussing their uses and advantages over the normal paraffin-based waxes.

He also discussed the dangers of using them.

Why did they become popular with cross-country ski racers?

According to Brown, “fluorocarbons form a thin film or membrane on the base of the ski,” similar to paraffins, but they are extremely “hydrophobic” — water-repelling — last much longer than paraffin based waxes, and are very dirt-resistant. That makes them ideal and superior to paraffins in certain conditions: high humidity, wet conditions, dirty snow, and in very wide temperature ranges. For long-distance racing, they are tougher than paraffins, and resist dirt. As Brown states, “They are forgiving over a broad range of conditions.”

It’s no wonder that serious racers were drawn to using fluorocarbon waxes, whose performance under tricky race conditions were superior to the paraffin-based waxes. They didn’t mind spending more money buying fluorocarbon powders and solids.

That’s why my wax bench has only CH and LF waxes on it. I’m not that serious and I’m Scotch!

But, with all things chemical, there are disadvantages, too.

The fastest of these fluorocarbon waxes contains a synthetic fluorine-based compound — perfluorooctanoic acid or PFOA.

PFOAs are “bad for the environment.” They can contaminate drinking water and soils and have been linked with cancer, liver damage, birth defects, hypertension and strokes. If absorbed frequently, they can cause tooth decay, osteoporosis, and harm kidneys, bones, nerves and muscles. Just waxing with them can be dangerous if you’re not in a well-ventilated area, and wearing gloves.

In his article, Donahue discusses testing done after the 2010 Sweden’s Vasaloppet, the world’s biggest ski contest.

After 30,000 entrants had skied the course, scientists tested the snow and soil and “found them tainted with fluorocarbons, which have been linked to cancer, liver damage, birth defects, hypertension and strokes.”

Information like this led the European Chemicals Agency (ECU) in July 2020 to “ban the sale, manufacture and import of all products containing PFOAs.”

A less toxic C6 fluorocarbon will probably be banned as well in Europe in 2022.

The EPA (Environmental Protection Agency), concerned about the harmful effects of fluorocarbons, initiated investigations into Swix waxes’ content. They claimed some of Swix’s waxes were in violation of the “Toxic Substance Control Act.”

Swix, Inc., currently makes 60% of all fluoro waxes worldwide, so this was a big issue.

I became aware of this while reading the November 2019 Cross Country Skier magazine.

In the section, “War on Wax,” Adam Howard writes an article called “Chain Reaction: When the Environmental Protection Agency audited Swix/Toko, the fluorinated stuff was just the beginning.”

Swix received a certified letter from the EPA, dated January 2018, that they were under “review for contents of all fluorinated Swix and Toko waxes imported from Norway over a five year period.”

Later, the investigation expanded to include every Swix and Toko wax and cleaning product.

Swix took action and voluntarily quarantined all their products. They review each for chemical content, to assure the EPA that the contents were federally approved under the Toxic Substances Control Act. No products were shipped to their retailers for at least two years. Slowly, as each product was approved, Swix began distributing them.

Steven Poulin, Swix USA’s president, talked with Howard last September. He said, “It’s our responsibility to be in compliance.”

When asked if the wax industry will move away from this fluorocarbon technology or be forced to by regulations, Poulin stated, “I think that the concern EPA has around the substance, it could push for legislation to ban fluorocarbons.”

Swix is already labeling some of their products with a green sticker as “fluoro-free.”

The CHX series of waxes are so labeled as they are “hydrocarbons” and not toxic. Swix is now claiming, “60 percent of Swix’s ski-wax are Fluor free.”

However, any Swix wax with an “F” in its label — Cera Nova X-FC, LF, HF, HFBW, or Cera F Solid Turbo — still contain fluorocarbons. They are marked with an “X” and a snowflake “Future Cera” snowflake on their labels.

According to Swix’s advertising, they have been re-engineered to be “more user friendly, cleaner, more environmentally sound.” But, they still contain fluorocarbons.

Currently, Swix and the Norwegian Ski Association Cross Country are working together to aim for a fluoro-free future. Already, fluoro waxes have been banned for Norwegian skiers up to 16 years old.

In the USA, thanks to Patrick Weaver, UVM’s Nordic coach, fluoro wax has been banned from most Eastern Intercollegiate Ski Associations races. However, the Federation Internationale de Ski, governing body of the Nordic World Cup races, has no plans to ban them.

Time will tell whether fluorocarbon waxes will disappear, appear on black markets, or be replaced by some other product developed to take their place as performance waxes.

For most of us recreational skiers and occasional racers, fluorocarbon bans might not affect us much, but I think it’s interesting environmental concerns have come sliding into such a “natural” sport.

Be aware of what you’re using on your skis and possible environmental impacts. Read labels and ask at the local ski shops. For your own health and that of the environment, stay away from fluorocarbon waxes — go fluoro-free.