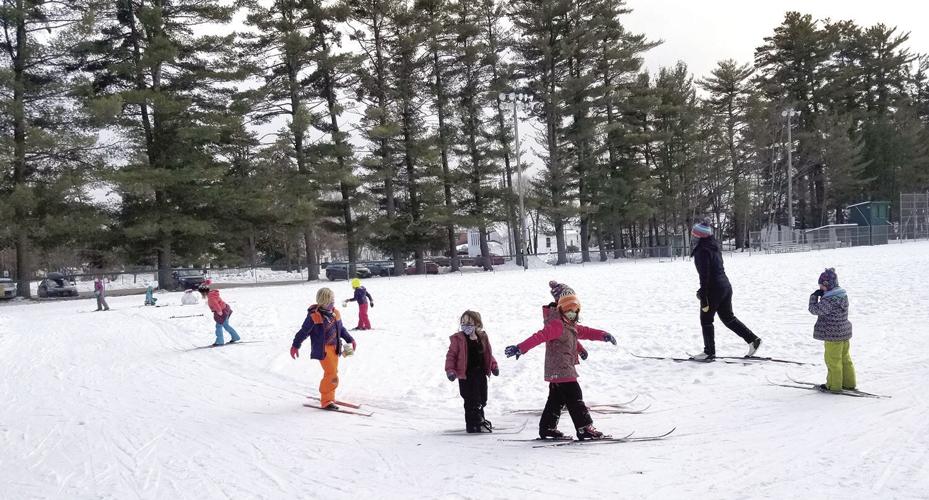 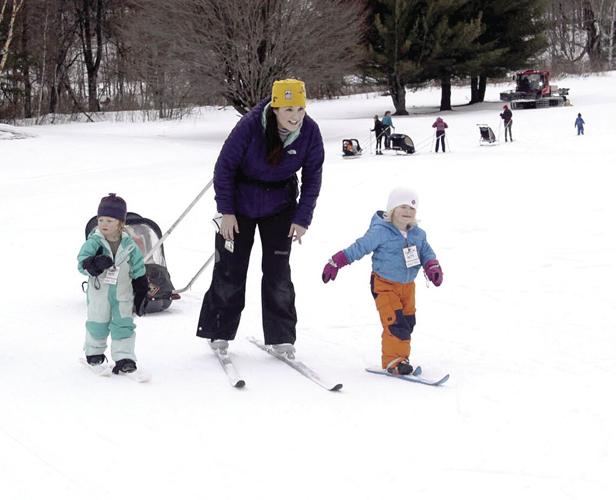 In Jackson, a young mother and her kids enjoys the Tots and Toddler program. (COURTESY PHOTO) 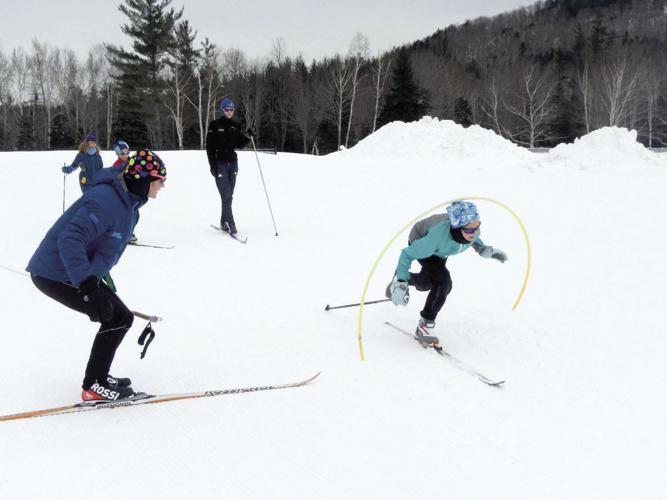 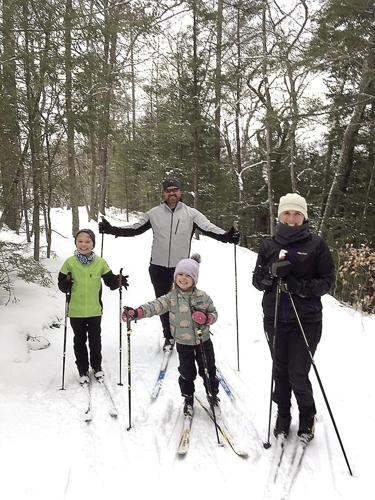 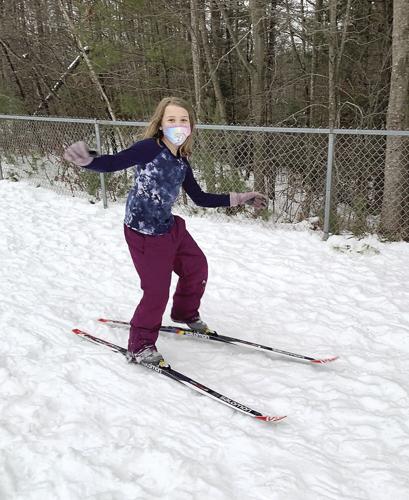 At Project SUCCEED’s after-school program, this girl has fun skiing on her school's playground. (COURTESY PHOTO) 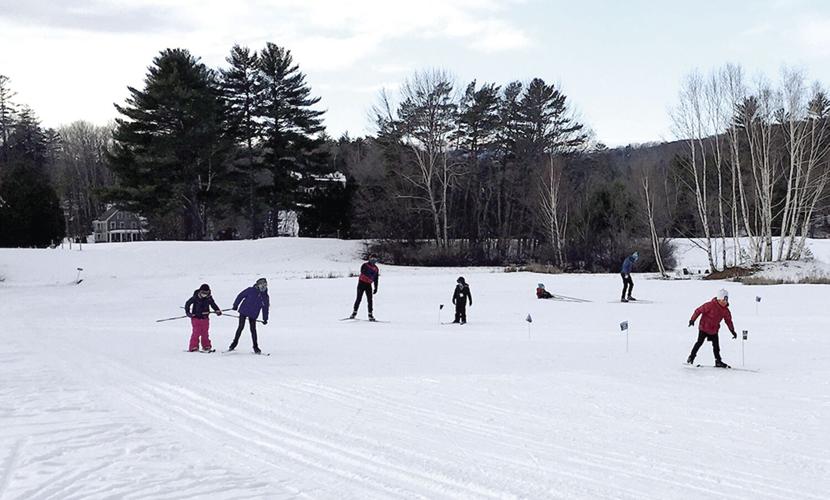 In Jackson, a young mother and her kids enjoys the Tots and Toddler program. (COURTESY PHOTO)

At Project SUCCEED’s after-school program, this girl has fun skiing on her school's playground. (COURTESY PHOTO)

After Christmas, I went cross-country skiing with my son Joe and his family on some local trails. I had forgotten how much fun it is to ski with kids — they give the experience a different perspective. Iver, age 8, has been skiing since he was 18 months old. Now, he’s flying down the trails and loving it.

His sister, Juliet, age 5, is coming along in her skills, too. That girl can sure climb using her herringbone! She might fall down, now and then, but she gets right back up and keeps trying. These kids are part of the next generation of Nordic skiers.

Children growing up in Mount Washington Valley are so lucky to have plenty of opportunities to learn to ski, snowboard, snowshoe and have fun on snow. There are many kid-centered programs they can try.

When we moved here in the 90s, we couldn’t believe students in local schools got to go skiing as part of their physical education program. What a great way for them to exercise, learn new skills, and find out about the local ski industry. Many of those Eastern Slope Ski Club kids went on to become racers, instructors, and lifelong skiers. It all happened because they had that early opportunity.

The ESSC program’s goal was to get kids outside in winter to play and learn snow sports. Local schools ESSC Junior Programs offered “a winter filled with skiing and snowboarding.” From January to March, children were offered half a day each week to learn and play on snow. The program offered an affordable, easy way for valley families to get children on skis or snowboards. Schools transported skis and skiers to the local ski mountains and Nordic centers.

With over 400 volunteers helping, 1,500 elementary students had the chance to experience the fun and sports of winter.

That’s where my children really got involved in snow sports. Cailin became a kid’s instructor at Cranmore in high school. Joe ended up racing for the Fryeburg Academy Nordic Team. He’s still cross-country skiing today, with his wife, kids and friends and loving it.

Besides ESSC programs, many local elementary schools offer cross-country skiing and snowshoeing as an after-school activity. At John H. Fuller, Pine Tree and Conway Elementary schools, Project SUCCEED offers Nordic skiing, snowshoeing and snow play to students enrolled in their program, at no cost to their parents. They have partnered with Jackson Ski Touring Foundation to provide instructional staff and equipment to students one day a week. The children have a chance to try skis and snowshoes on their own playgrounds.

On Thursdays at Jackson Grammar School, there’s a similar program where students can Nordic ski with groups and volunteers after school on Jackson trails. This program is being directed by Mike Dufilho.

North Conway Community Center in North Conway also has a Friday afternoon ski program for students in grades K-6. They meet at Whitaker Woods from 3:30-5 p.m., starting Jan. 7 and going until March 11. Students bring their own equipment. The cost is minimal — $25 for residents and $35 for non-residents. It’s another way for kids to experience the joy of skiing.

The purpose of the program is to offer families a safe alternative to keep their children active this winter. The goals are for participants to: “1. Gain Nordic skiing experience and develop basic skills, 2. Practice kindness and inclusion as they wait at trail forks for others and by encouraging group members, and 3. Participate in 60 minutes of physical activity each session.”

Through fun games and activities, young skiers build skills while having fun on snow. When asked for comments about the program, Carrie McLane Burkett, NCCC’s executive director shared: “In order to get kids to build their skills and get better (and most importantly-actually enjoy the sport!), it is important to play games and make it fun. We start the session with a game that encourages the skiers to move around constantly.”

After the ski games, the large group breaks into smaller groups to explore the trails. “Volunteers split participants into groups according to age, interest and ability. The emphasis is on Nordic skiing in a recreational and social setting, not according to competitive goals.”

The focus of the program is on ski skills development, fun games on skis, trail skiing, hunts and obstacle courses, sprints and races, ski jumping, ski care and more.

Usually, at the end of the season, there’s a big BKL Festival where all the clubs come together to have fun dressing up for the parades, racing, playing games, and meeting other young skiers from all over New England. This year, it’s at Waterville, Maine starting on March 6.

The BKL program was awesome for my son. He skied with and met other young Nordic skiers, participated in the races and games and became a better skier. Now, his son is participating and having fun while learning new “ski” skills.

Jackson Ski Touring Foundation has embraced the idea of encouraging young skiers through their programs. They offer programs from toddler level to K-6th grade.

Toddlers and Tots happens on Tuesdays. This free program runs from January to March. On Tuesday mornings, non-holiday, Jackson XC offers free tickets and rentals, including pulks and tot skis (skis kids can use with their regular snow boots), to adult skiers who bring a child or children under the age of 5 to the center. The use of equipment is based on availability. It’s a self-serve program where parents show up with their toddlers to use the equipment.

JSTF also offers free use of tot skis on other days when parents rent a pulk. That allows parents to introduce their young children to skiing in a family setting.

Speed Camp: On Tuesdays, from 2:30- 3:30 p.m., this program is geared toward K-6 students. This is a “no-charge coaching program for kids who already have some ski experience.”

Coaches Bill Leathem, Colin Pogue and Scott Berkley plan games and races to get young skiers moving, build skills and, of course, have fun. They usually meet on the Wentworth Loop near the center. The program takes place 100 percent outdoors.

These children's Nordic ski programs all have things in common — get kids playing and skiing on snow, having fun, and building skills. Once they’ve discovered the fun of gliding over the snow, they’ll become the next generation of cross-country skiers. It’s time to pass the torch and encourage these youngsters to take the sport forward.

Hope everyone has a happy New Year of skiing.