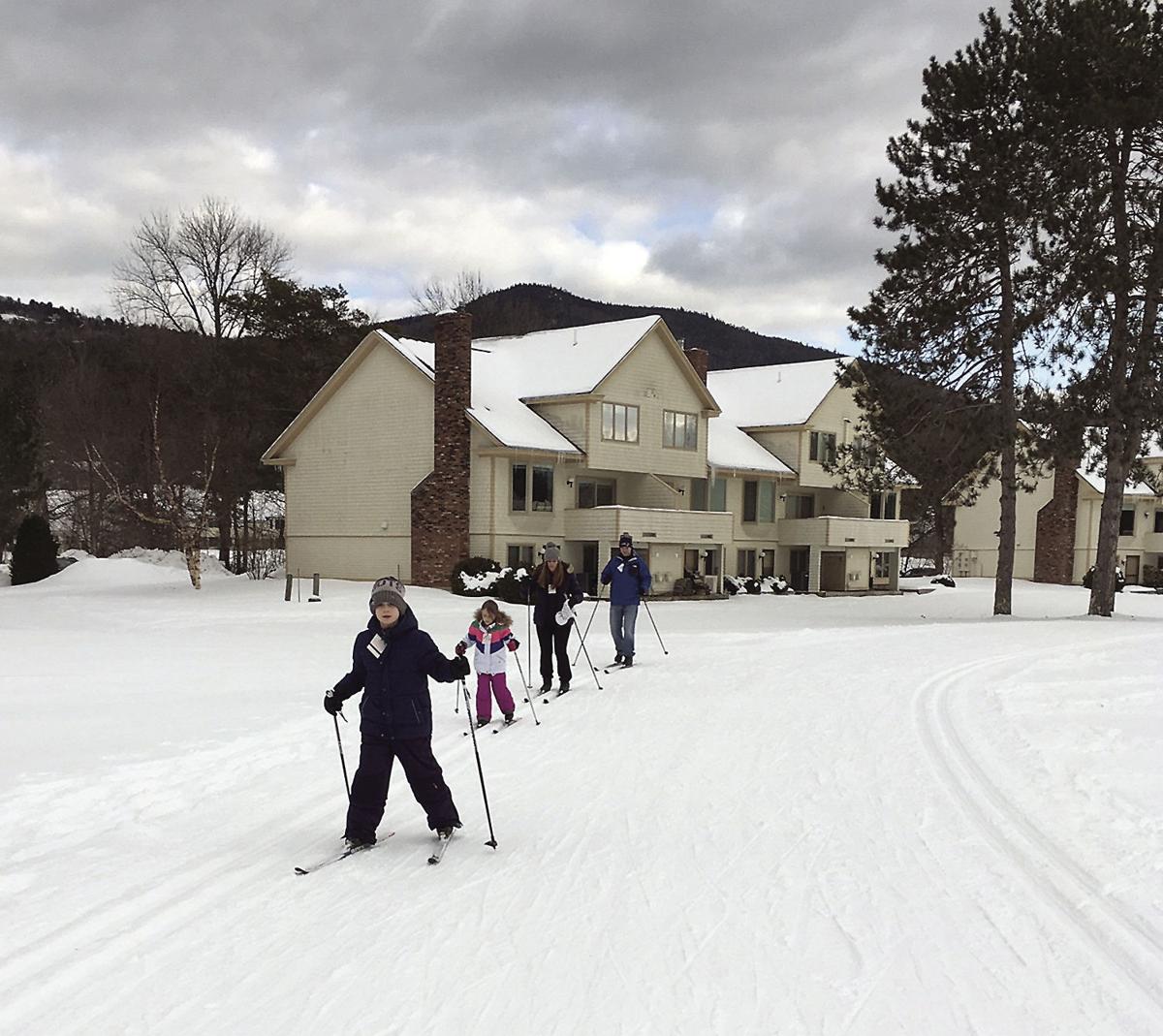 A family skis up the "Goldilock" hill as they learn how to climb on their skis. (SALLY MCMURDO PHOTO) 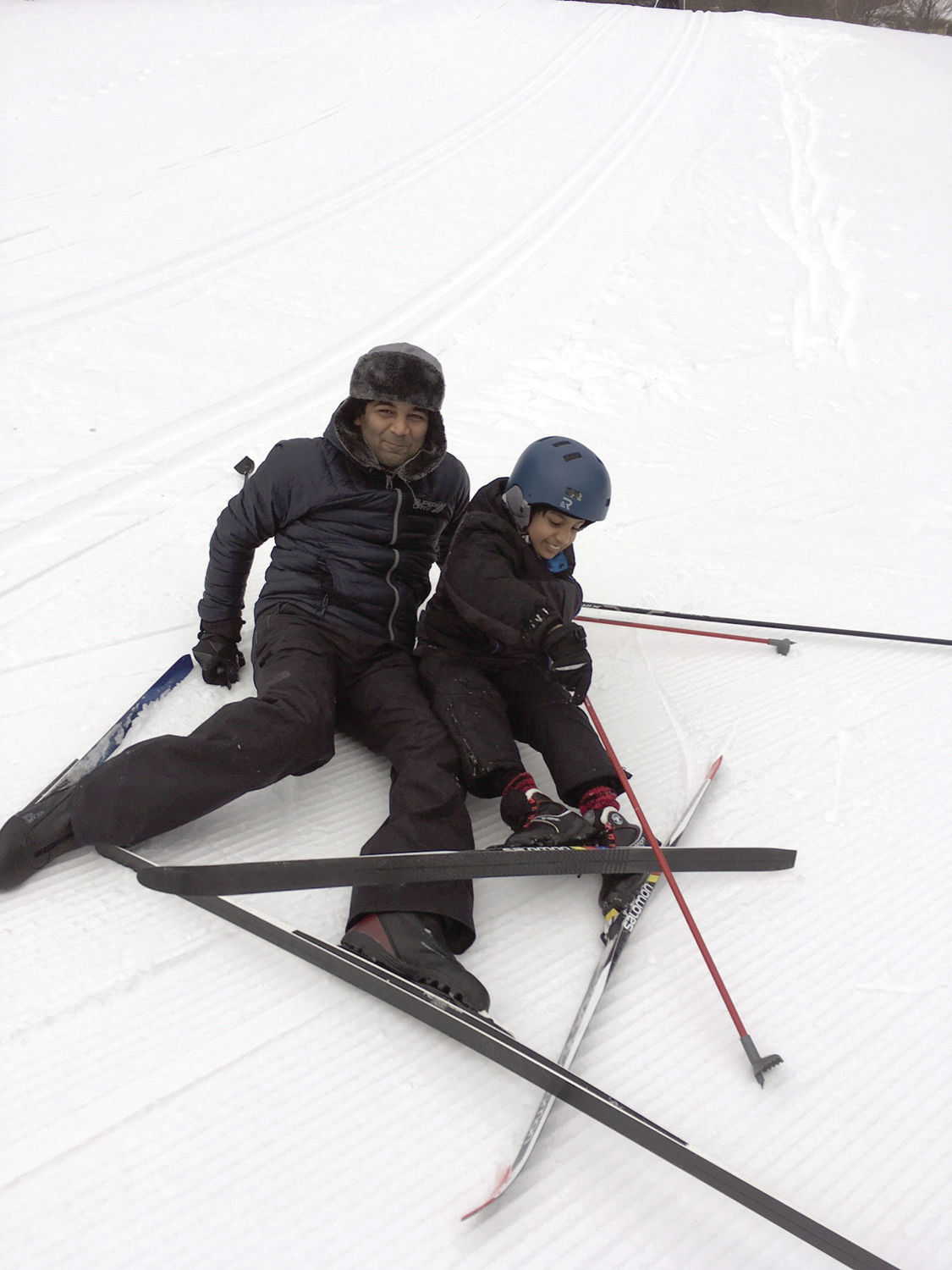 Dad and son after colliding at the bottom of the hill break into laughter as they try to untangle themselves. (SALLY MCMURDO PHOTO) 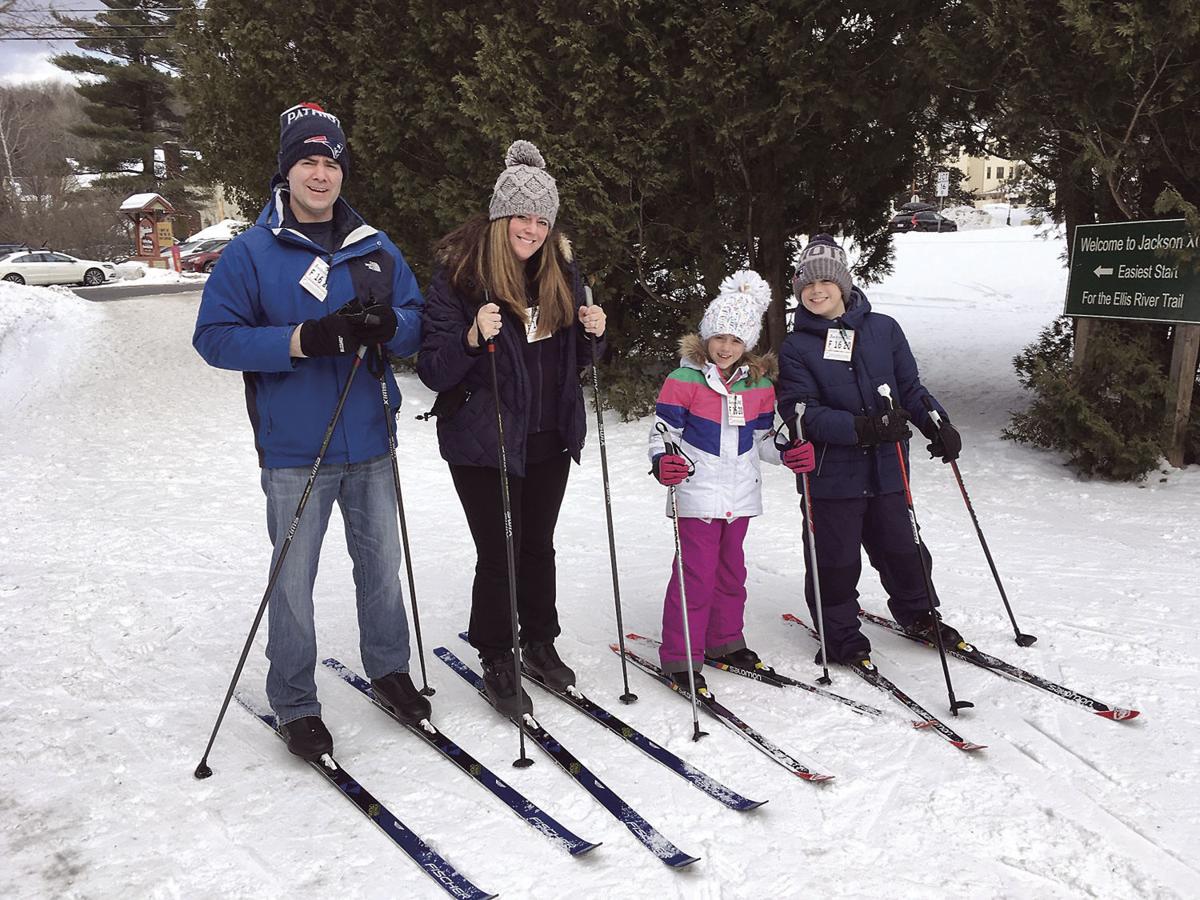 A family from Boston poses for a group photo before beginning their ski lesson. (SALLY MCMURDO PHOTO) 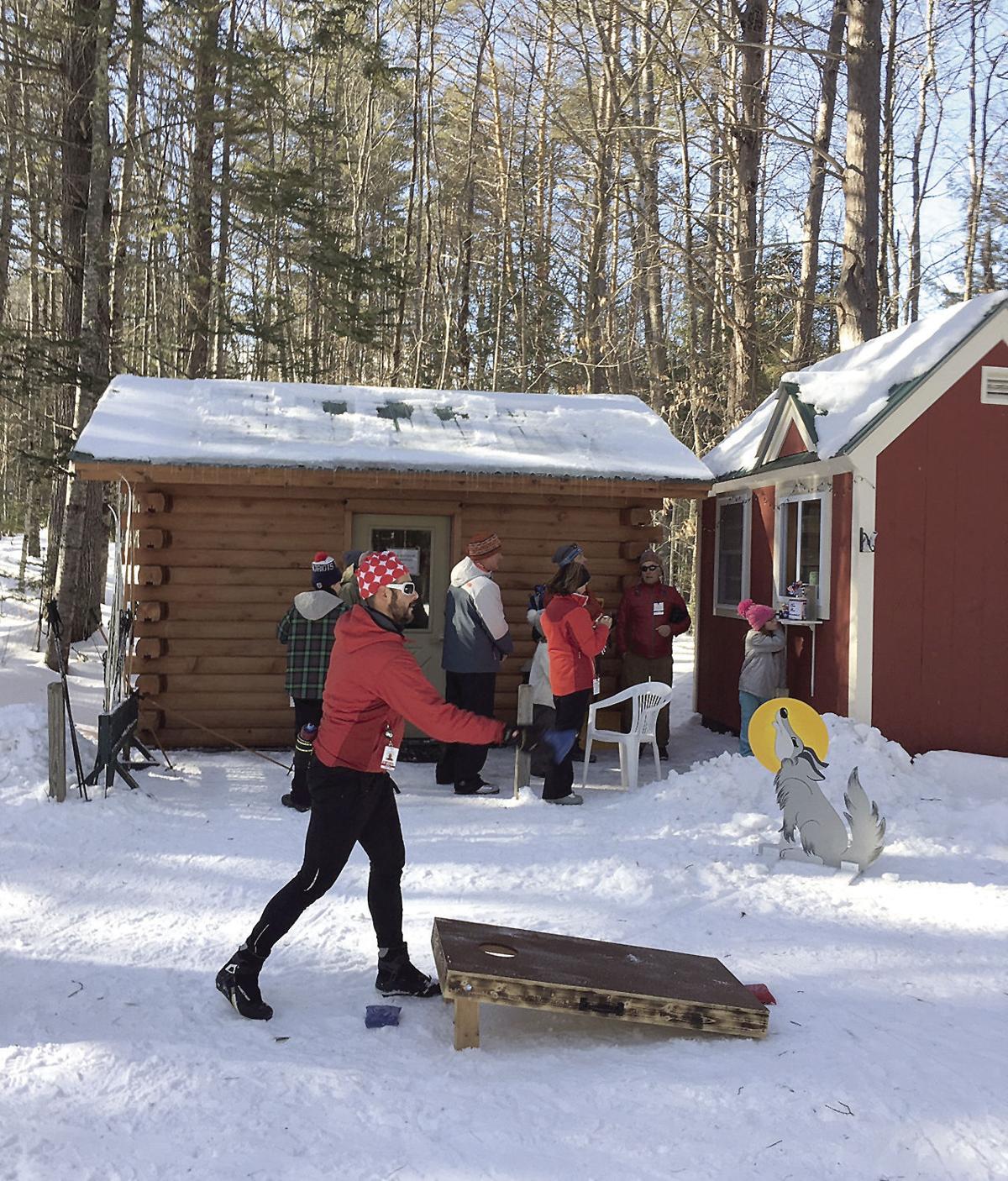 A family skis up the "Goldilock" hill as they learn how to climb on their skis. (SALLY MCMURDO PHOTO)

Dad and son after colliding at the bottom of the hill break into laughter as they try to untangle themselves. (SALLY MCMURDO PHOTO)

A family from Boston poses for a group photo before beginning their ski lesson. (SALLY MCMURDO PHOTO)

It’s school vacation week. Families are coming to the Mount Washington Valley to experience winter snow play. They’re skiing and snowboarding downhill and heading out on cross-country skis and snowshoes. They try snow tubing, snowmobiling, ice skating, sleigh riding and more. Thankfully, Mother Nature has been kind to us lately and provided the white, powdery stuff everyone wants to play in — snow.

In the 1980s, we also made the snow pilgrimage north with kids in tow. We’d balance our time between skiing at Black Mountain and going Nordic skiing. When the kids were very young, we signed them up for toddler programs at alpine areas where they got snow time, snacks and a nap, if needed.

When they got older, we signed them up for downhill ski lessons. I remember my surprise riding up Black Mountain’s chairlift when I saw my son and his friend zipping down the slopes underneath us, with instructors following behind. Everyone survived and had a great time.

As for cross-country, that was something the kids had been doing since they could walk. They were able to handle their skinny skis well enough to go on family ski tours, without needing a “how-to” lesson. All we had to do was plan our tours carefully to meet their needs, not ours.

This week, at my Nordic center, I saw families of all types, playing on snow. Some were obvious “Nordics” who started their kids on skinny skis when they were very young. Others were new to the sport, with little adult or kid experience. Those were the ones I saw in “Learn to Ski” lessons. Although it is sometimes challenging to teach adults and children in the same lesson, it can also be enjoyable for everyone if you keep it light and make it fun.

I started Sunday with a dad and his 8-year-old son from Boston who had never skied before. It didn’t matter. They were eager to learn and willing to try. They laughed at each other when they fell and congratulated each other when they made it up or down the hills. On a small hill, dad came down after his son and ran into him. They both went down in a confused pile of poles and skis, but nobody was hurt. They laughed and laughed.

After the lesson, I saw them again that day and the next going up and down the hills and practicing their new skills. They had discovered a new way to have fun in the snow and with each other.

At the end of the day Sunday, I had a family of four. They had driven up from Boston that morning and wanted to learn how to cross-country ski. The 7-year-old boy and 9-year-old girl were excited. The parents were more nervous than the kids, but they were all game. When dad fell, the kids teased him. When the littlest couldn’t make it up the hill, they encouraged him. At the end of the lesson, they were all smiles and ready to ski.

In between these lessons, I had a “kids only” lesson. Depending on who signs up and their ages and experience, this can be challenging. The kids were similar in ages — 8 and 10. Two had skied a lot with their family and just come back from a Cocoa Cabin tour. Next to them, was a never-ever skier. We worked on similar skills, but I gave the more experienced skiers more challenging tasks and hills to try while I worked on the other skier’s confidence and skills. They were all good-natured and willing and we had a good time together.

A mom and her 14-year-old son rounded out my day. They already knew the basics of skiing, but wanted to build their downhill skills and confidence. We played on various hills and tried skiing downhill in the tracks and around curves. We practiced the half-snowplow, turning snowplows and step turns. By the end of the lesson, they were eager to try their new skills on bigger hills.

Toddler lesson requests are tougher. Kids under-5 aren’t ready for a “traditional ski lesson.” Because of their young ages, they have shorter attention spans and less endurance. They get cold and tired quickly. The best approach for their lessons is to keep it fun, play games and get them moving on skis. When they get tired, cold or hungry, the lesson stops and it’s time for hot chocolate.

When skiing or teaching children, it’s important to factor in the child’s needs first. Parents and instructors need to make sure the children feel safe and comfortable and that they’re having fun, and feeling rewarded for their efforts.

If the environment feels scary or overwhelming, the child won’t be relaxed and will resist. If it’s cold, or the child is hungry or tired, lessons and tours won’t go well. That’s why many young families take pulks out on tours for that time when the youngster “tanks” and needs a rest. If the child isn’t having fun and a good time skiing, guess what? They won’t want to continue or come back. The aim is to have only positive experiences.

It’s the adults’ job, whether an instructor or parent, to make it fun by playing games and finding ways to engage the child. One way is to set targets — “Can you ski to the bridge or through the tunnel?” “Can you make it to the Cocoa Cabin?” “Let’s find the Storybook Trail or look for animal tracks and nature signs.”

There’s great snow outside right now. Turn off the television and devices and get outside. Bundle up the kids and go play in the snow. Winter can be fun for everyone.