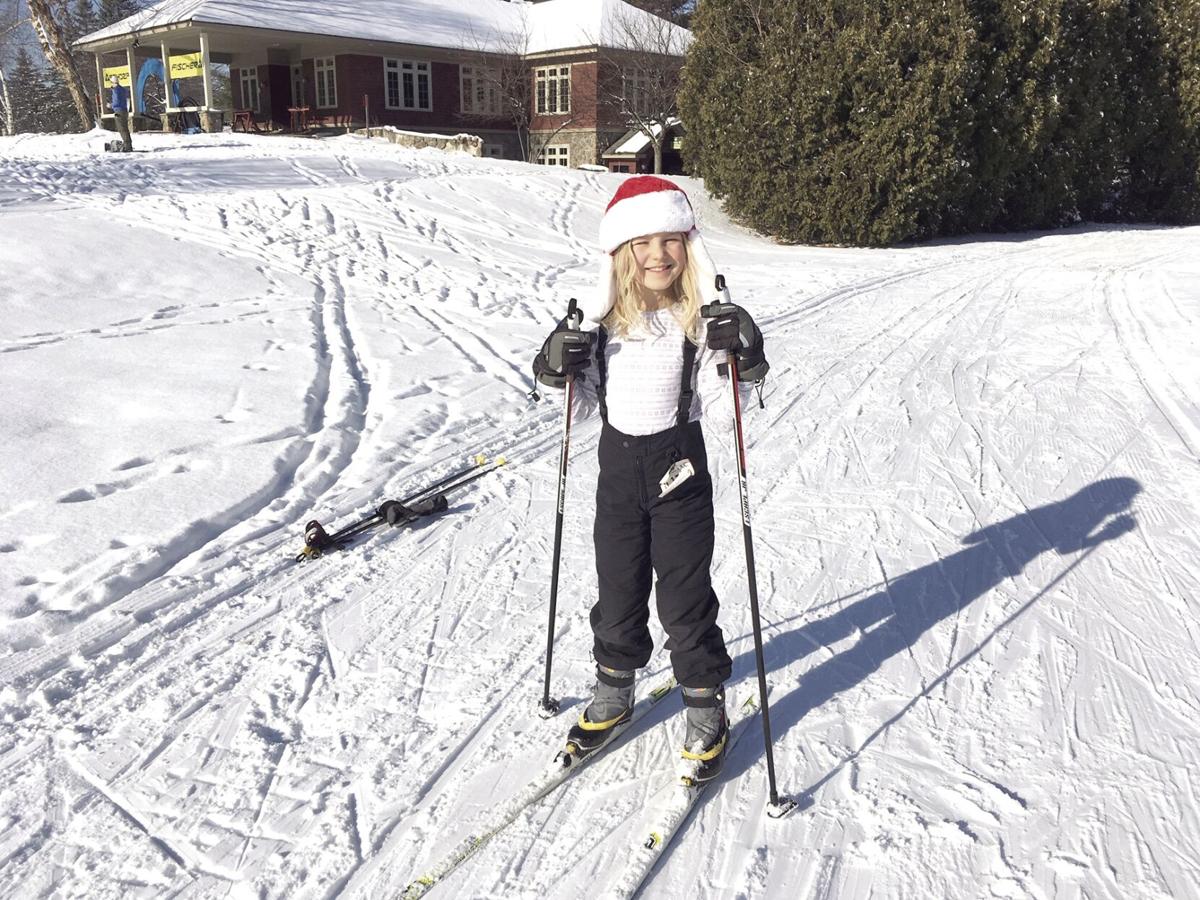 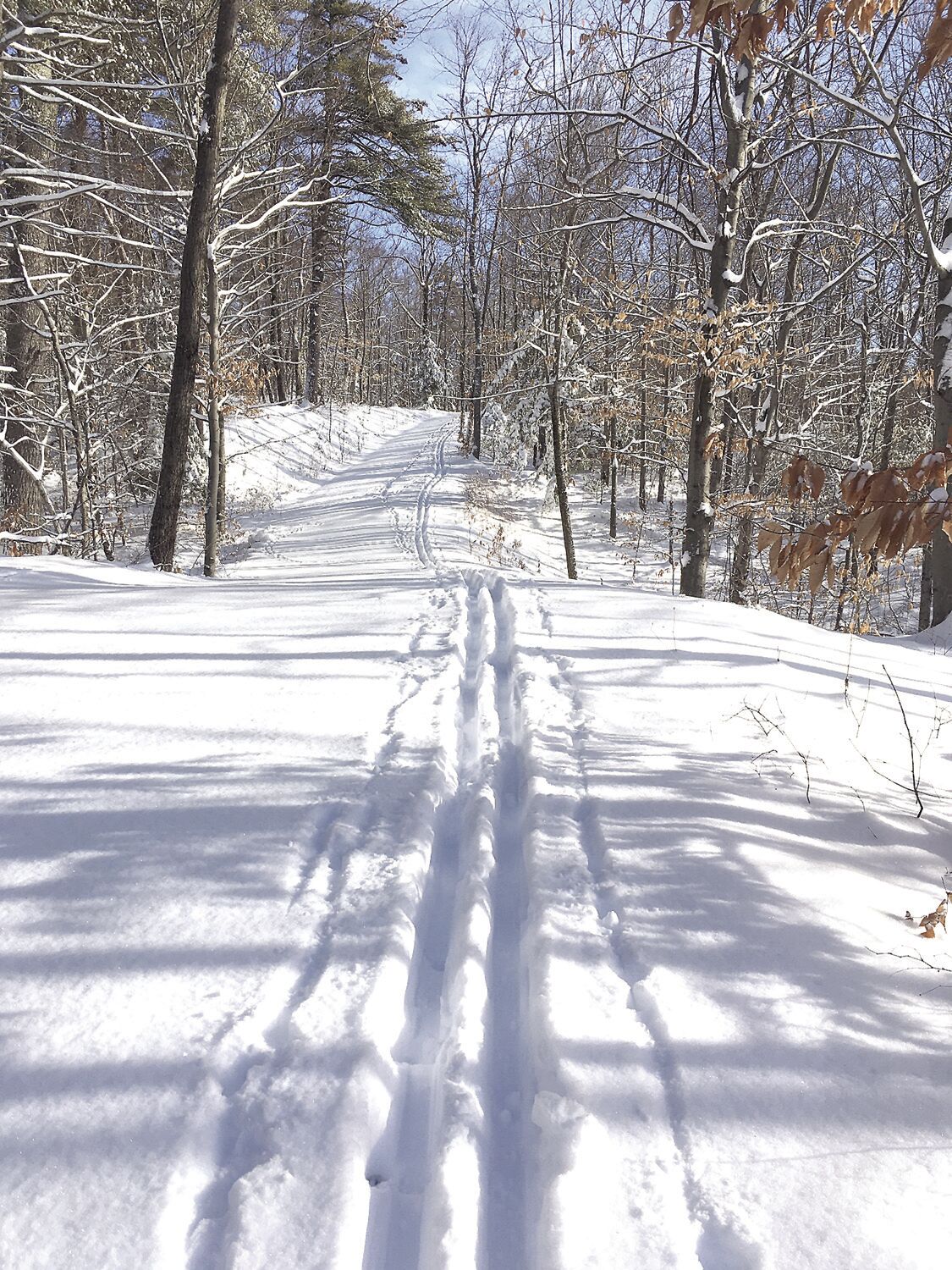 There's nothing better than skiing through the woods on powder snow. (SALLY MCMURDO PHOTO) 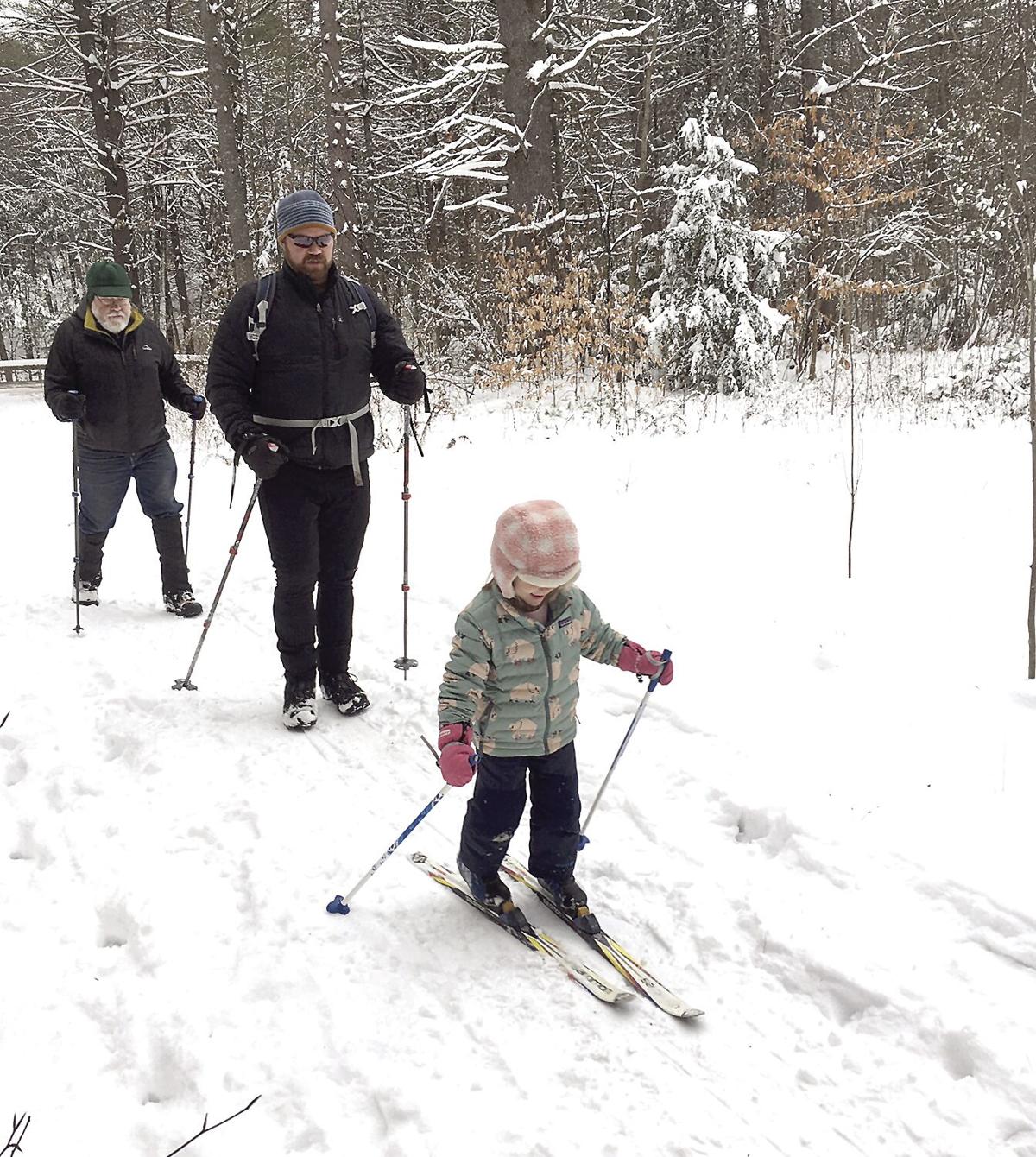 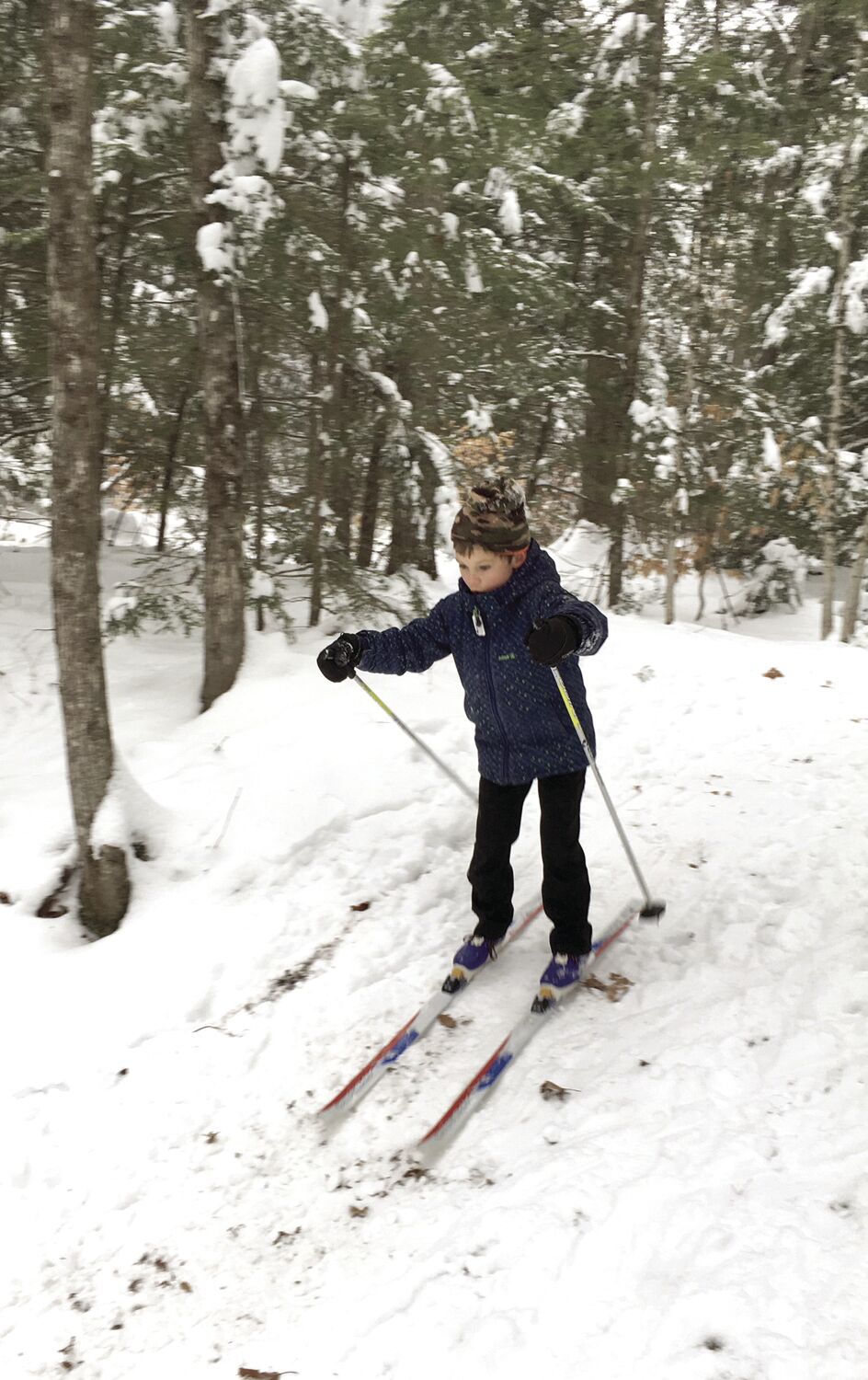 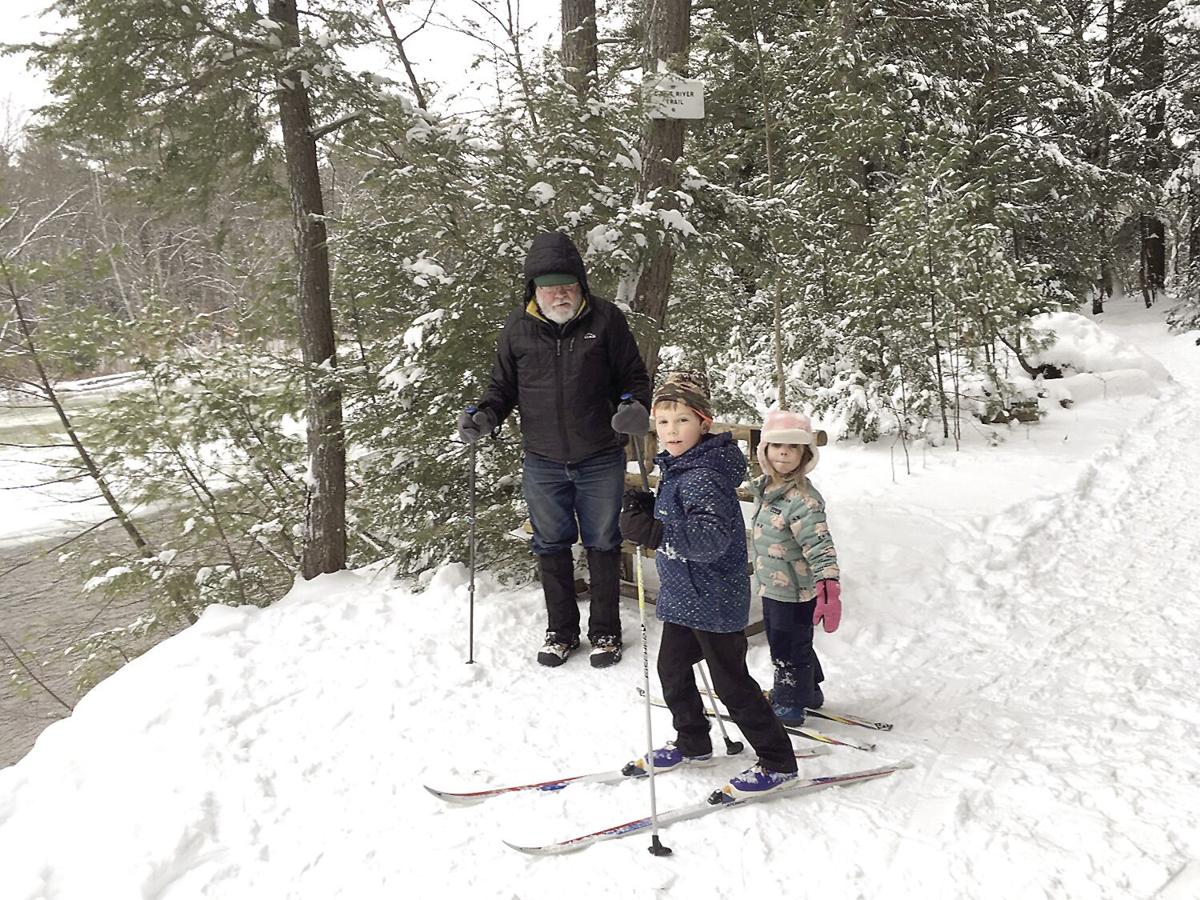 The Minnich clan — Grandpa Peter with Iver and Juliet — takes a break by the Swift River in Albany Town Forest. (SALLY MCMURDO PHOTO) 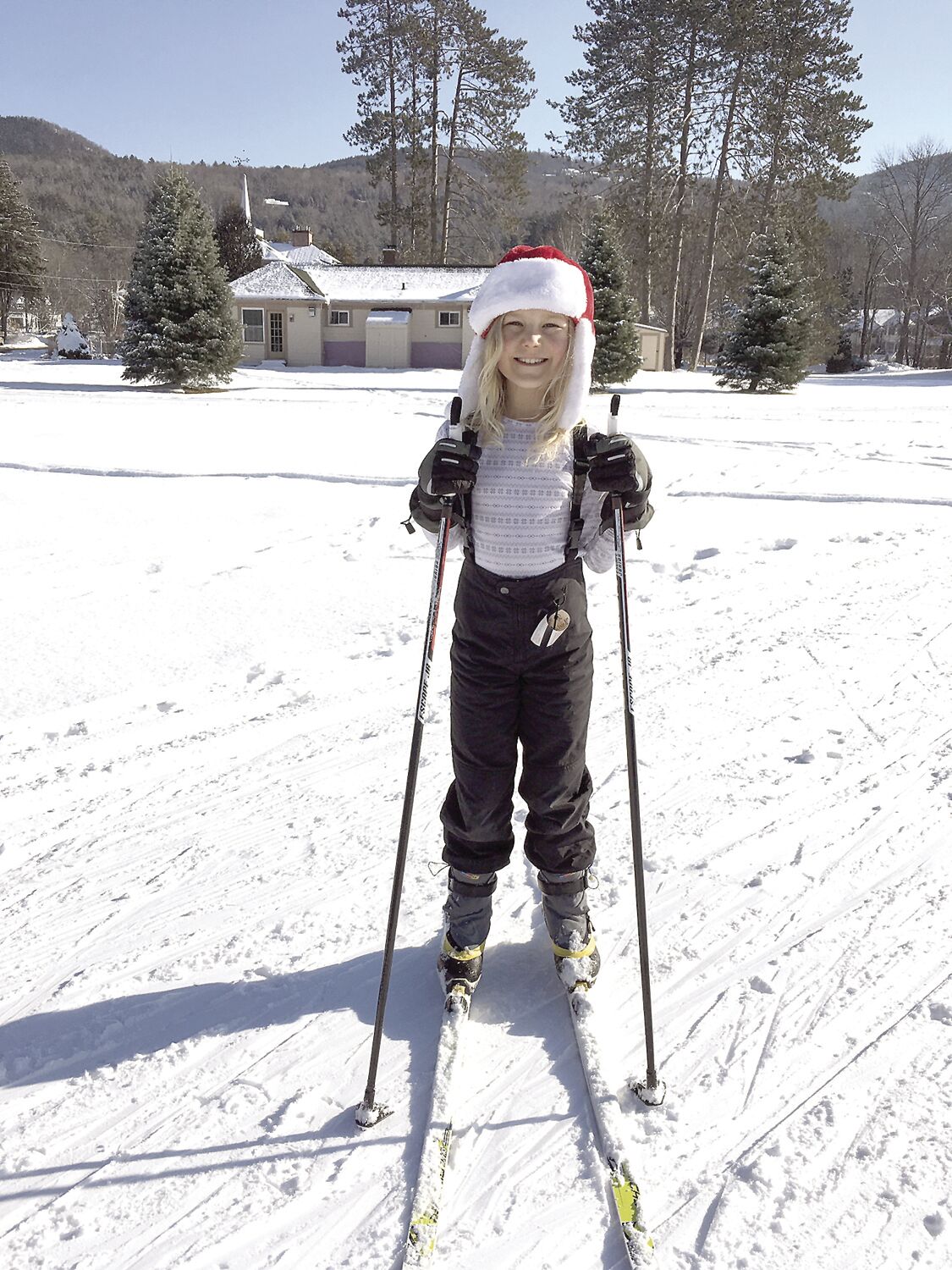 There's nothing better than skiing through the woods on powder snow. (SALLY MCMURDO PHOTO)

The Minnich clan — Grandpa Peter with Iver and Juliet — takes a break by the Swift River in Albany Town Forest. (SALLY MCMURDO PHOTO)

Give me nine inches of fresh powder and I want more. I guess I’m a snow glutton. Though I don’t relish shoveling lots of snow, I do like to see it on the trees and ski trails. It makes winter more beautiful and fun.

A year without it is a cold and drab year. Lack of snow hurts the environment and the economy. Without frequent snowstorms, the ground isn’t insulated, there’s less snowmelt and water in the spring and animals accustomed to living in snow suffer. Businesses and people who depend on snow activities for income have a lean year. This is Northern New England — it’s not natural or healthy to have no snow.

I moved to New Hampshire in 1977. Being a southern girl, I had limited experience with snow, except for freak storms that shut down towns for days. That year, I fell in love with snow. There was the downside of shoveling mounds of snow, driving in treacherous conditions and waiting until late May for signs of spring, but I still delighted in every snowfall. Even the blizzard of ’78 didn’t get me down, though it buried my car.

What I discovered about snow was that it was beautiful, natural and fun. I learned to cross-country ski and snowshoe and that made snow wonderful. Teachers I worked with that didn’t get outside to play in snow hated winter. It was all work and a nuisance for them.

Now, more than 40 years later, I’m still loving the snow. Familiar trails looked different in the snow. That’s what makes snow so exciting — it changes the look and feel of the landscape.

The Dec. 17 snowstorm was a welcome relief from bare ground, but it also brought shoveling and clean-up duties. The next day, I was determined to get out to play, not work in the snow. I grabbed my backcountry skis and headed to local trails. The early morning snow sparkled like diamonds in the snow. Someone on a dawn ski with her dog had proceeded me, so I followed her tracks. The snow was so beautiful and the woods so quiet. I fell into to the diagonal ski rhythm as I climbed the hill. Circling around it, I played with my downhill glide and carving turns in the snow. I was in snow heaven!

Sunday, in an effort to get Christmas-crazy grandkids outside, we planned an outing in Albany Town Forest with my son, Joe. Grandkids Iver, age 7, and Juliet, 4, insisted on cross-country skiing. We adults opted for walking the packed trails. That made it much easier for us to help, encourage and pick them up along the way. Sometimes, we had to “shake them out” when skis were crossed and poles tangled. Some adult coaching happened along the way, too. We had an awesome outing on trails we’d hiked and biked in seasons before, now painted white.

Monday, I skied again. This time it was for work at Jackson Ski Touring. I had multiple lessons scattered during the day. Could I remember what to teach and say? It all came back to me as I faced each group of skiers.

The couple in the first lesson were avid snowshoers, but new to cross-country skiing. It took them a while to get comfortable with the slipperiness of snow. Like many people, they were afraid of falling.

At lesson’s end, I encouraged them to try it again, on their own. With equipment rented for the day, so I sent them to Woodchuck Fields to enjoy wonderful, flat skiing with great mountain views. If that didn’t work for them, there were numerous snowshoe trails near their Wentworth Condominium. There’s more than one way to enjoy the snow!

The next lesson was an interesting skate ski lesson with a 7-year-old. It was challenging for me because it was my first time on skate skis this winter. It was challenging for her because she hadn’t had much cross-country experience. Her mom accompanied her in the lesson and encouraged her. Between the two of us, she learned about “playing on skis” by trying different drills. By the end of the lesson, she was experimenting on her own and smiling.

In the following skate lesson, I had her mother as a student. Although her mother had been a professional athlete, recent injuries and surgeries had left her compromised and unsure of her abilities. We worked on crucial skate ski components of weight transfer, extension and flexion, and, always, balance. With a number of drills and feedback, we could identify her next steps in getting her ski legs back.

Each new winter, it takes all of us some time to get back in the skiing groove again. Anyone coming back after injuries and long rehabilitation and therapy has an even harder time. Like rusty dancers, we have to get the kinks out and remember the moves.

The last lesson of the day focused on classical technique. A young woman who just recently moved to the area signed up for Jackson’s “GET 3 and Go” package. Her package included three lessons, three rentals and a season pass for only $199 per person. It is a great deal and a way to really get ready for the ski season.

With this student, I focused on basic skills and knowledge, making sure I covered how the equipment worked. Working on the flat terrain first, we worked without poles, then added them for push. Graduating to hills, we played with all the ways to go uphill or down. By the end of the lesson, she was gliding, climbing and going down hills with more confidence. With two more lessons, she’ll be on her way to enjoying the winter.

After all this “snow” fun, I was sore Tuesday. There must be some muscles you don’t use in the warm months that hurt you after the first skis of the winter season. I took a day off and did Christmas things.

Once Christmas preparations are done, all I want for Christmas is more snow. We have some snow now but could use more. A sudden warm-up or rainy week could wash it all away. I want plenty so I can keep playing in it with my grandkids, exploring on my snowshoes and cross-country skiing. Snow may be a bother to clean up, but it’s also a necessary part of our environment and community. Besides, it’s wicked fun to play in!

Happy holidays to all. Get out and play in the snow whenever and wherever you can. Conditions allowing, soon all the Nordic centers and backcountry ski trails will be open, so go out and ski and snowshoe. Enjoy the winter snowscape!