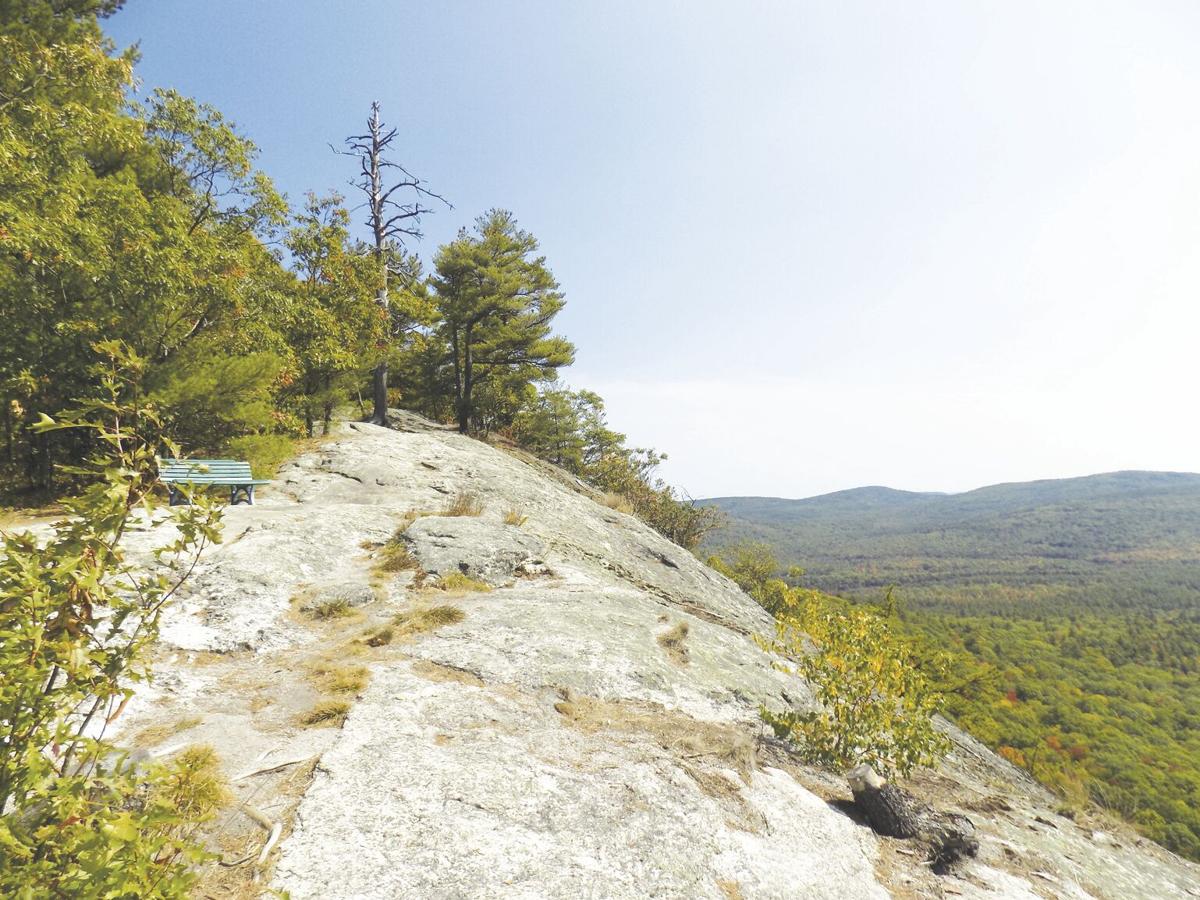 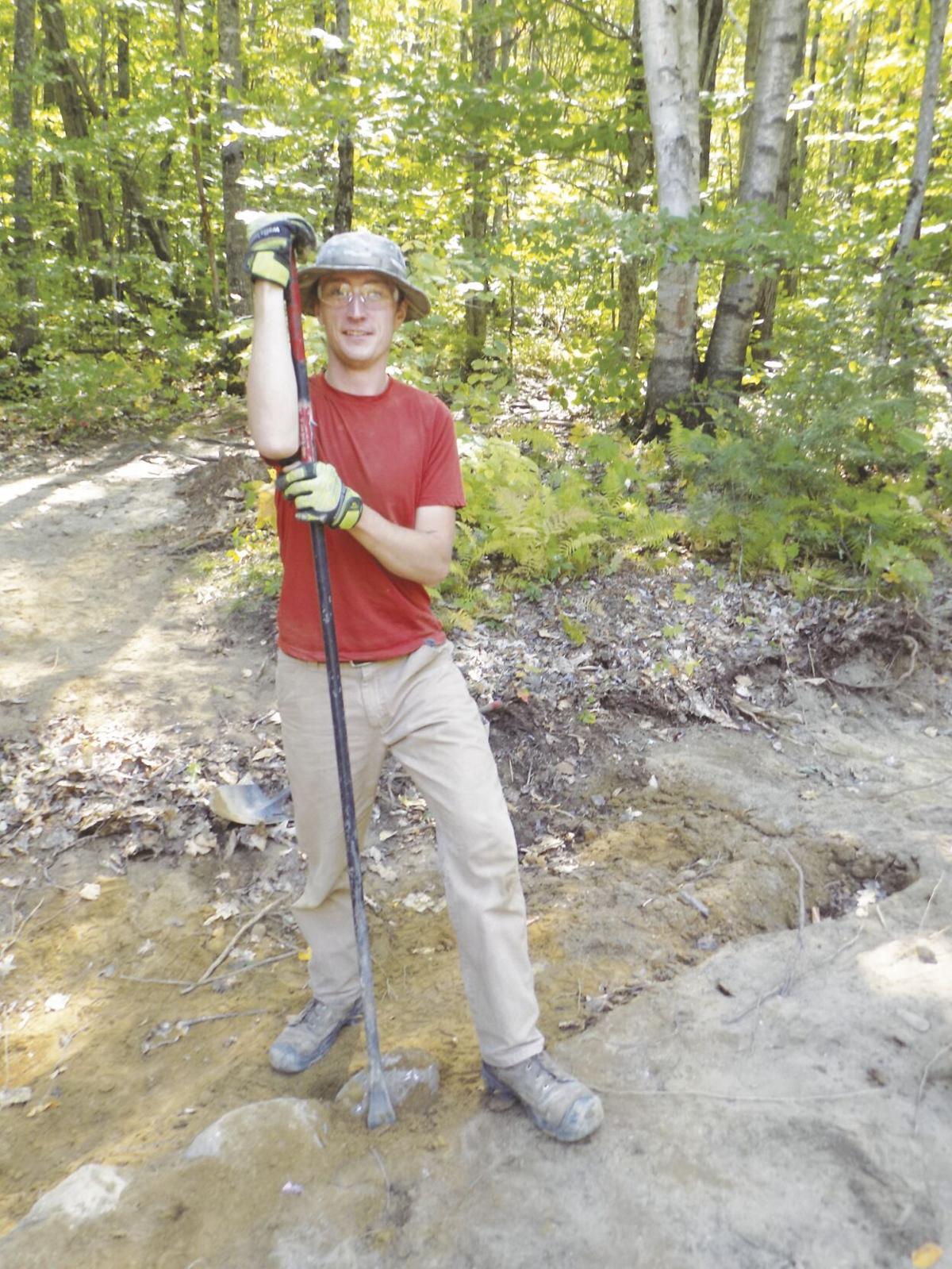 Climbing 1,253-foot Mount Sabattus in Lovell, Maine, is always a pleasant time. On the summit is a great south-facing clifftop view. If I lived nearby, it would be a place I would go all the time to witness New England weather, and with the blessing bestowed on all addicted hikers, get some exercise as well.

I climbed it on a magical day 22 years ago, soon after the 1998 ice storm. The sun was sporadically appearing in the morning a couple days after the storm. I started up the right-hand loop trail beneath clouds, as ice crashed with startling suddenness from scattered trees.

As I approached the top, the sun suddenly came out and light shone through the crystal forest. I stepped out onto the summit ledges to a white under-cast below and a blue sky above, with nearby ice laden trees. Then the clouds slammed shut again for the rest of my time there.

This Wednesday afternoon, I had the desire to head to Maine, and I climbed the mountain. But first a few words about its name.

It was named for the Indian Sabattus who had a hunting camp on its slopes. Legend suggests that he killed a mountain lion there, just as it sprang on him.

Sabattus was born in St. Francis, Canada, and with the influence of French missionaries, was named for St. John the Baptist, shortened to Sabattus. When Roger’s Rangers destroyed St. Francis in 1759, Sabattus was about 10 years old. He was kidnapped and went south with the rangers. Later, he went to Fryeburg with one of them, and spent the rest of his life in the area.

Sabbatus had two children with the well-known area healer, Molly Ockett. In 1783, an earlier wife of his returned from a long trip to Canada, and claimed to be his spouse.

To settle the dispute, Sabattus took them to the house of Mr. Wiley in Fryeburg so there would be a witness, and the two women fought, “hair and cloth flying everywhere.” Mrs. St. Francis, as Molly Ockett called the former wife, was stronger and won out. Molly Ockett left and moved to Andover, Maine.

Sabattus’ hunting camp on the mountain in Lovell likely doubled as a base for acquiring game, and a temporary refuge from domestic travails.

In much more recent times, much of Mount Sabattus was purchased by the Maine Bureau of Parks and Lands. The trails are maintained by the Greater Lovell Land Trust. Up on the summit ledges there are two metal personal memorial benches facing the view. The MBPL gave permission for these to be put there, though permission for more is unlikely.

The complete loop hike on the mountain is only 1.6 miles long.

This Wednesday, I left Fryeburg and headed out Route 5 towards Lovell, passing through Lovell village, and in 3.8 miles further, reached the Center Lovell Store on the right. In another 0.7 miles, I turned right on Sabattus Road. In a little over a mile, I bore right and uphill on the dirt Sabattus Trail Road. In another 0.7 miles, I turned right into the well-marked parking lot for the Sabattus Mountain Trail.

A ditch has been dug with a small backhoe around the upper end and side of the parking lot to drain water and prevent erosion on the dirt lot itself, which has been a problem in recent years. They were reinforcing the sides of the ditch with stones where the trail crossed.

She responded with enthusiasm, saying her last job at that preserve had been to put in the patio and picnic table at the site of the former cottage where New York artist Thomas Dewing and his wife had spent a few summers in the early 1900s. We agreed it is was popular and unique preserve.

She enthused about the preserved properties of the Greater Lovell Land Trust, and suggested I also visit the Five Kezar Ponds Preserve, where there is a 0.83 mile hike to a great summit view of the five ponds, the entire area and the Presidentals to the west.

As for the area’s crown jewel, Mount Sabattus, she said that the land trust’s relationship with the owners — the Maine Bureau of Parks and Lands — had always been informal, with the land trust maintaining the trail.

But she recently had reached out to them to work out an agreement, to share some capital cost. Presently the MBPL is building a kiosk for the parking lot, and the land trust will install it.

I headed up the trail and soon took the right hand loop. With an easy push up the winding trail I reached the open summit on top of the south facing cliff. The sunny world opened up. Kezar Lake and the Baldfaces were to the right.

Below was the familiar land of Lovell. I spied the gardens of a farm owned by George Eastman, founder of Eastman Kodak, on a low ridge nearby, where he had kept some of his horses.

I continued on the loop, soon passing a giant quartz boulder, and heading down. At the parking lot, Rowland had left to work on grants in the office, but Paquereau was still there working.

This is another example of what used to be a wonderful trail and summit that now suffers from overuse, thanks to TripAdvisor, social media, and the Conway Sun.