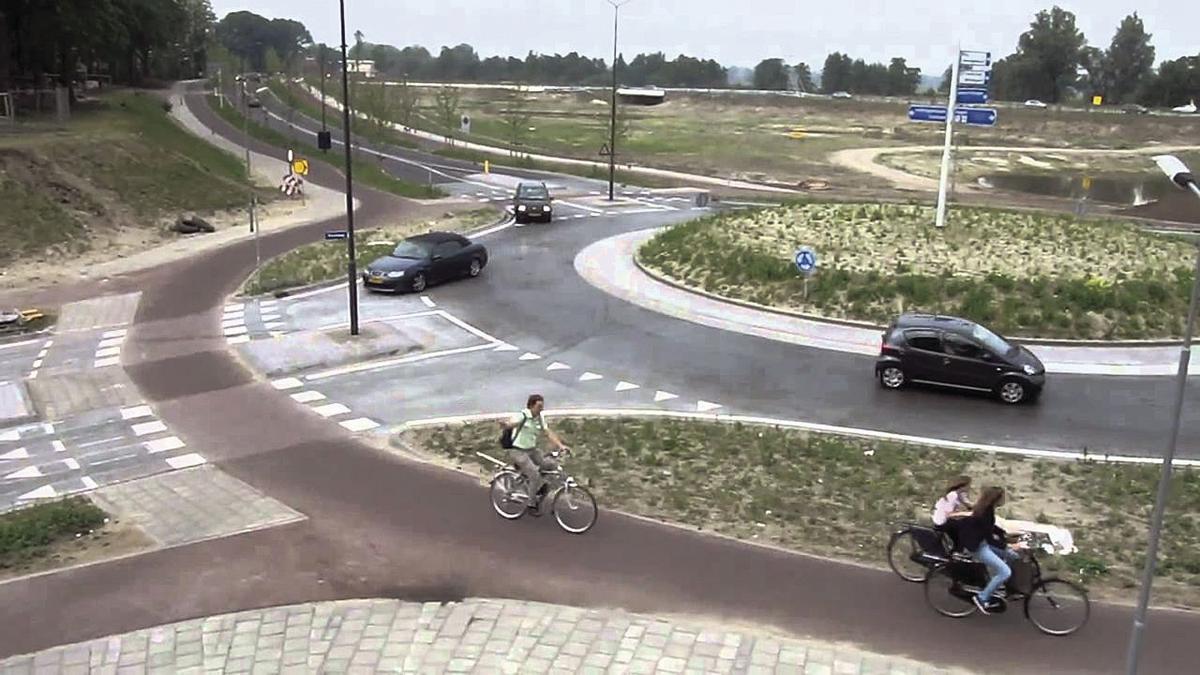 In the Netherlands cyclists have their own lanes in roundabouts. (COURTESY PHOTO) 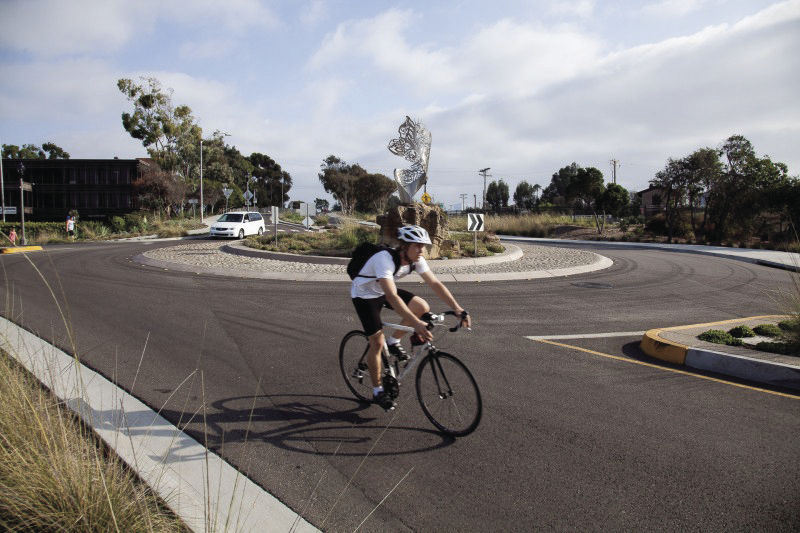 This cyclist is visible and taking his place as he cycles around the roundabout. (COURTESY PHOTO) 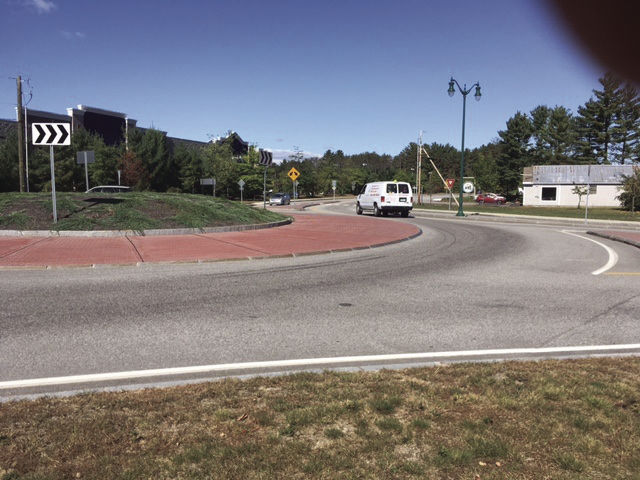 Entering the first roundabout on North-South Road near Walmart, a cyclist has to watch for cars exiting toward Walmart and entering from Hemlock Lane. (COURTESY PHOTO) 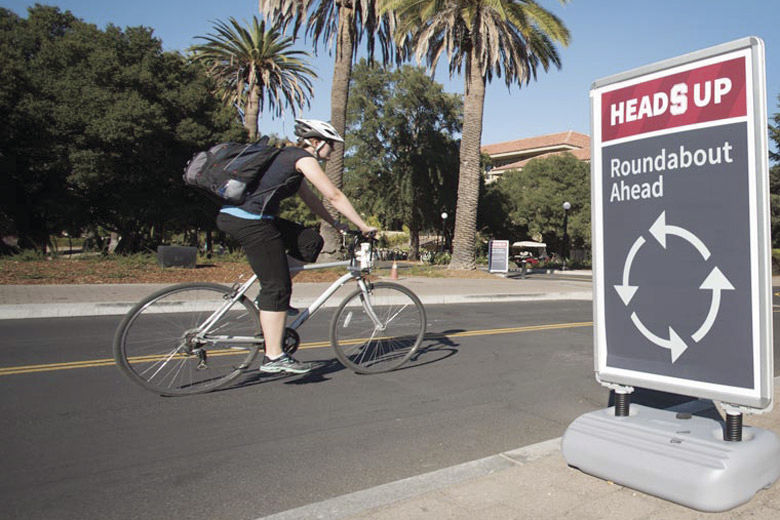 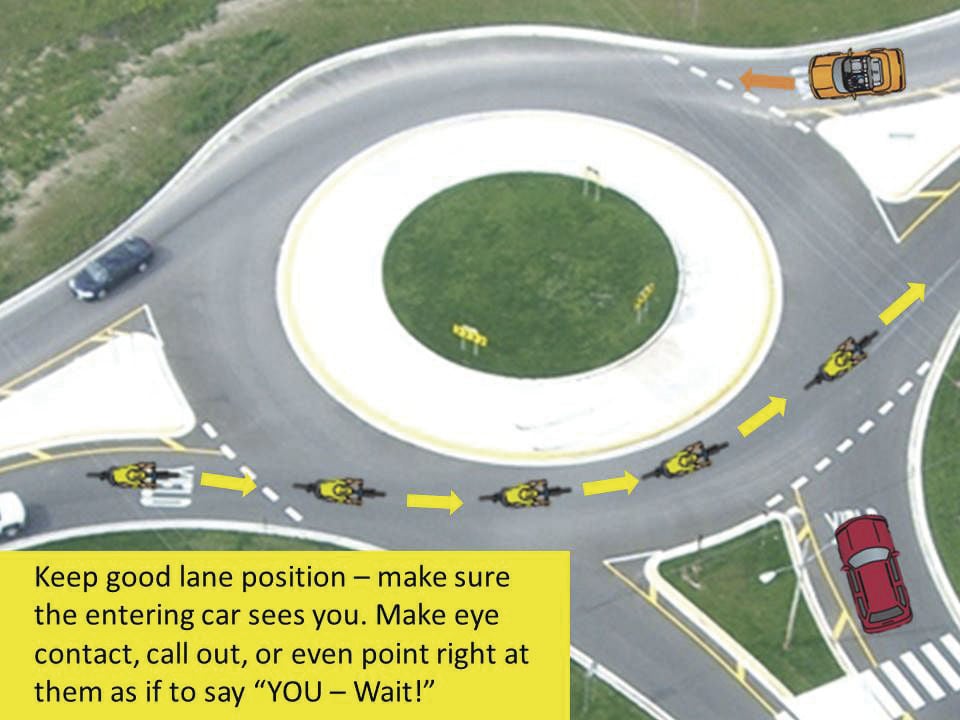 Retrogrouch's diagram here shows where it's safest for a cyclist to ride in a roundabout to get where he's going. (COURTESY PHOTO)

In the Netherlands cyclists have their own lanes in roundabouts. (COURTESY PHOTO)

This cyclist is visible and taking his place as he cycles around the roundabout. (COURTESY PHOTO)

Entering the first roundabout on North-South Road near Walmart, a cyclist has to watch for cars exiting toward Walmart and entering from Hemlock Lane. (COURTESY PHOTO)

Retrogrouch's diagram here shows where it's safest for a cyclist to ride in a roundabout to get where he's going. (COURTESY PHOTO)

When did roundabouts come around? I first encountered one in 1977. A friend and I were driving from Virginia to Keene. We were looking for Antioch University. According to our paper maps (no GPS then), and directions, Antioch was close to Keene’s Central Square.

Driving up Main Street, I arrived at the square’s roundabout. Having no experience with roundabouts, I panicked. Where was I supposed to go? I didn’t know which road I needed to get to Antioch, which was just a block away. After circling the square five times, I picked Court Street, a road fanning out from it. Good choice — I found the crossover road to Antioch from there. Before that, spiraling through my brain was the idea that I’d never get off that roundabout.

Since then, I’ve driven numerous roundabouts. Some, in unfamiliar territory like Boston, kept me nervous and rotating until I got my directions and bearings. Roundabouts are tricky when you don’t know where you’re going. Driving them can be challenging, riding them on a bicycle almost ludicrous.

Wikipedia defines a roundabout or traffic circle as “a is a type of circular intersection or junction in which road traffic is permitted to flow in one direction around a central island, and priority is typically given to traffic already in the junction.”

Roundabouts first appeared in the United Kingdom in 1966. Since then, they’ve been utilized all over the world to help with traffic flow. When we first moved to Mount Washington Valley, there were none. Now, there are two and more to come.

What purpose do roundabouts serve? As I circled that Keene one years ago, I thought their purpose was to drive me nuts. But, as I’ve learned how to deal with them, I’m starting to see their value as traffic controllers.

Roundabouts do several things: 1. slow traffic down, without stopping it, 2. minimize the likelihood of T-bone and head-on crashes, 3. make for one-directional traffic flow, which is safer, 4. slow traffic down enough to allow for safer pedestrian travel and crossing, 5. reduce the queuing that happens at traffic lights and perpendicular junctions, 6. produce less pollution because vehicles are not idling at stoplights, and 7. produce less noise from vehicles stopping and starting off at stoplights.

Well-designed roundabouts make traffic flow smoother and safer, as long users understand how to negotiate them. When the first roundabout was constructed on the North-South Road, there was some confusion about how to handle it. For drivers, it didn’t take long to figure it out. But, for cyclists, the markings on the pavement directing bicycles were perplexing. As you came into the circle in a bike lane, the lane switched over from the road to a sidewalk, then back again at the far end of the circle. Where was a bicyclist to go?

The summer of 2008, the Maine Bike Rally came to Fryeburg, Maine. As part of that rally, I took a course on bike safety. I wanted to become a certified LCI-League Cycling Instructor — under the League of American Bicyclists program. To get certified, we had to take written exams and on-bike, on-road testing. One of my on-road tasks was to take a group of four cyclists through that roundabout safely. I had my work cut out for me.

I was able to do it smoothly and safely because of multiple factors. I was already familiar with this roundabout and knew the bicycle markings were wrong or not the best option. I figured out how to handle it because I’d ridden it before. Through my own experience and the course teachings, I knew to communicate clearly with my fellow riders and motorists in the roundabout. Driving my bike like a vehicle made me assertive and confident. I “took the road” when I needed to for my safety and that of others.

Why am I focusing on riding a bicycle through roundabouts? A fellow rider asked me to write about how to handle them. Earlier this summer, he was riding with a group on the North-South Road when they encountered the two roundabouts. Many of the cyclists had no idea what to do. That made for a very unsafe situation.

How to roll around a roundabout safely on a bicycle:

1. Know where you want to go: Before you enter a roundabout, know the road number, name or direction you want to go. In unfamiliar territory, look at your map or GPS beforehand to make that determination. Pull off and assess the situation and make your plan. Entering a traffic circle without this knowledge is like being on a roulette wheel — you never know where you’ll land and you may just keep spinning in circles.

2. Don’t be shy. Be assertive, act like you know what you’re doing and where you’re going. A confident rider commands more respect and attention from other vehicle users.

3. Take the lane if you need to: Hiding out on the right-hand side of a roundabout is not the safest place to ride. As the CyclingSavvy booklet, “Bicycling Street Smarts” I just bought says, “You risk a drive-out or right hook if you pass an entrance or exit at the outside of a roundabout.” It advises, “Stay far enough left to keep clear of entering and exiting traffic.”

My experience in numerous roundabouts has been the more I claim my space on the road, the more cars pay attention to me and let me go where I need to go.

4. Be clear in your communications: Let other cyclists and motorists know what you’re doing by using signals, body language. looking back, pointing and verbal commands. Don’t leave them guessing.

5. Be visible: Wear bright colors and reflective clothing. Use blinking front white lights and blinking rear red lights so motorists and cyclists can see you. Be firm in your lane positioning so you’re clearly visible.

6. Riding in a group — follow a capable leader: Make sure the person in front knows what to do and follow his/her lead. With a smaller group (4-6), ride as a unit as you negotiate the roundabout. It’s less confusing to drivers than sporadic riders entering and exiting. A larger group should break into pods of 4-6 so as to not clog the roundabout.

7. Feeling unsafe or unsure? Become a pedestrian. There’s no shame in walking your bike if you’re confused, the traffic is too much or you don’t feel you can handle the situation. It’s better to be safe than sorry. If I don’t know where to go or feel overwhelmed, I get off my bike and walk it until I get past the tricky places.

Some cyclists may opt to avoid roundabouts entirely. However, if you’re riding in a benefit ride like the Seacoast Century or a group ride, you might not be able to. Even on bike paths like the Cape Cod Rail Trail, you’ll encounter a roundabout where trails split off.

It makes more sense to learn how to handle them by practicing here on the North-South Road. Pick an early morning, weekday time when there’s little traffic. Have an experienced rider lead the way and show you how. Roll around the roundabout-you can do it.

For more information about cycling through roundabouts, go to:

Books: tinyurl.com/y39vpuup — $5 single copy, plus shipping and handling. Worth the money and very helpful.

July 9-Aug. 27 (Tuesdays) — Great Glen Trails Mason and Mason Insurance Mountain Bike Race Series, 3:30-7 p.m., for all ages. Choose a distance, course, and time that suits you and have some fun riding the Great Glen Trails.