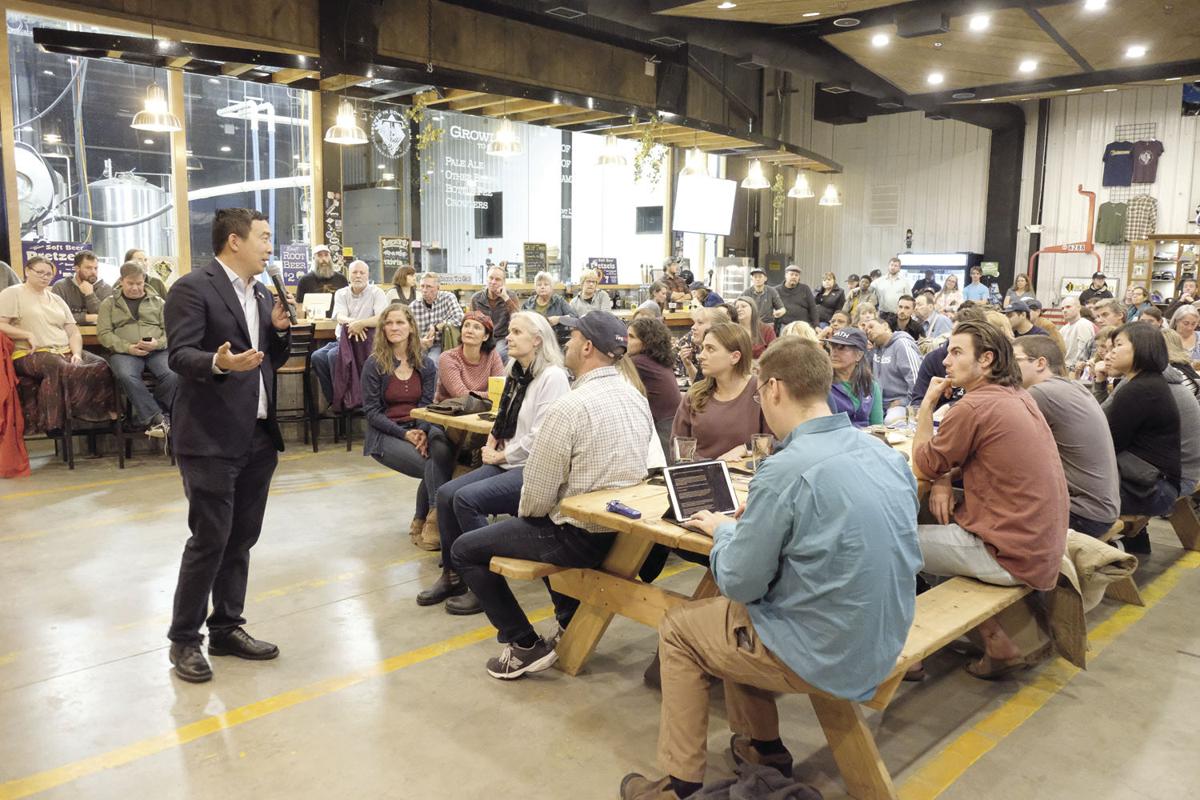 Democratic presidential hopeful Andrew Yang speaks to a crowd of about 100 people gathered at Tuckerman Brewing Co. during a campaign stop in Conway on Wednesday. In his second visit to Conway, he answered questions from the audience and talked about his plans for his “Freedom Dividend.” See story, page 12. (JAMIE GEMMITI PHOTO) 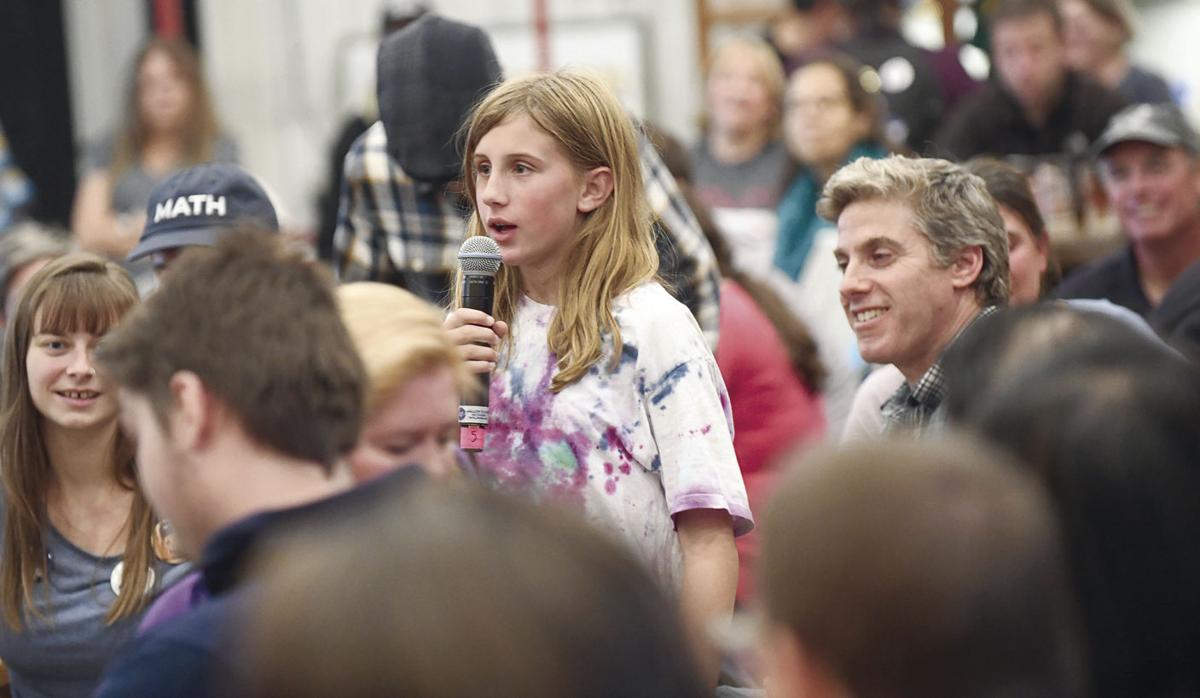 Twelve-year old Zoe Groves of Conway asks presidential hopeful Andrew Yang what environmental and climate policies he might implement if he becomes president during his campaign stop at Tuckerman Brewing in Conway on Wednesday. (JAMIE GEMMITI PHOTO) 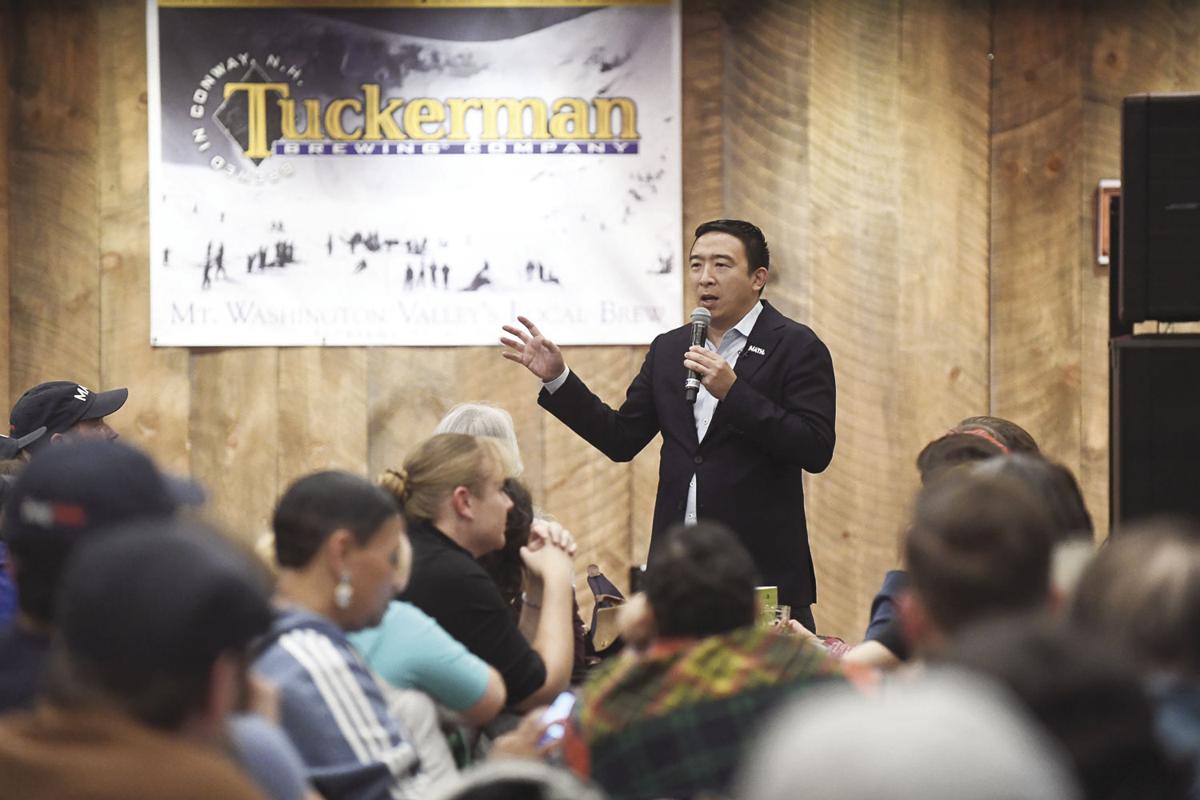 Democratic presidential hopeful Andrew Yang speaks to a crowd of about 100 people gathered at Tuckerman Brewing Co. during a campaign stop in Conway on Wednesday. In his second visit to Conway, he answered questions from the audience and talked about his plans for his “Freedom Dividend.” See story, page 12. (JAMIE GEMMITI PHOTO)

Twelve-year old Zoe Groves of Conway asks presidential hopeful Andrew Yang what environmental and climate policies he might implement if he becomes president during his campaign stop at Tuckerman Brewing in Conway on Wednesday. (JAMIE GEMMITI PHOTO)

CONWAY — Democratic presidential hopeful Andrew Yang brought his campaign to Tuckerman Brewing Co. in Conway on Wednesay, and was peppered with an assortment of questions about the opioid crisis, war, guns, the environment  and health care Wednesday from a crowd that turned out to meet the candidate.

Yang, 44, a New York City-based entrepreneur, is perhaps best-known for his “Freedom Dividend” guaranteeing $1,000 a month to every American adult over 18.

Yang, who appeared wearing his trademark “MATH.” lapel pin that was a surprise star in the last Democratic presidential debate. The “MATH,” a response to MAGA hats popular among Trump supporters, stands for “Make America Think Harder.”

According to Yang, one out of every three American workers is in danger of losing his or her job over the next 12 years because of new technologies.

After being introduced to the crowd of about 100 people by former Portsmouth Mayor Steve Marchand, Yang outlined his policy positions for about 30 minutes before taking questions from the audience.

Angela Gomes of Conway asked about the opioid crisis. She said while many people are becoming addicted to opioids, people like her parents who need pain medication are being denied.

“The opioid plague is a disease of capitalism run amok,” said Yang, mentioning Purdue Pharma, which manufactured Oxycontin and claimed it was non- addictive. Yang added that at one point there were more opioid prescriptions in Ohio than people.

“When you see that this is a systemic failure at the highest possible levels, you have to do a few things ... You have to claw back the billions of dollars in profit that these drug companies made and say this is blood money on American lives and we are going to take it all back from you. To the extent we can identify individuals who are culpable we should throw them in jail. Last time I checked, mass murder is a crime.”

Before he could continue, Ryan Lariviere of Tamworth interrupted to press Yang on that.

“Why are we holding the drug companies accountable when the people who were actually giving the drugs to people are the doctors?” he asked.

Yang replied the drug companies knew what they were doing, and if a physician was also aware of the risk, he would also hold the doctor accountable, too.

Twelve-year-old Zoe Groves told Yang that over the past 60 years about 40 percent of all known species have been declining and she asked what he would do about that.

Yang replied that he believes climate change is to blame and that it’s an existential threat.

“I was just in Portsmouth and they told me about a multimillion dollar shrimping business that’s gone to zero dollars because of warming waters and the shrimp dying,” said Yang adding he has also heard about houses that are now flooding regularly. “I’m staking out the new third position on climate change that it’s even worse than you think.”

Yang said he has a five-part plan to address

climate change and it involves taking away fossil fuel subsidies and reinvesting other forms of energy. He would also negotiate with developing counties to steer them away from coal-fired plants offered by China. Yang told the Sun his plan would include Thorium-based nuclear power. He would also reforest land and reseed ocean beds with plant life.

Kennett High School teacher Kat Murdough said her brother Rob has served in Iraq and is still on active duty.

“Convince me you will be responsible for my brother’s life,” said Murdough.

Yang replied that he signed a pledge to end the “forever wars.” He said Congress should declare war but they have virtually abandoned their responsibility and passed it to the executive branch.

“I would be much more judicious and restrained in using military force,” said Yang, adding he would invest in diplomatic efforts and infrastructure.

Yang also said he would do more to help veterans get jobs. He said veterans’ groups tell him that employers view veterans as a risk to hire. “I said, ‘Oh my gosh. That’s so dark,’” said Yang, adding he would make military credentials count in the civilian world.

One man, who declined to give his name to the Sun, asked Yang whether he would confiscate AR-15 rifles.

Yang said he would do a voluntary buy-back and improve gun safety over time. He said guns could be made or modified for free so that they can only be fired by their owners based each owners’ unique grip.

“Some gun owners would enjoy that, and if you’re a gun owner, you don’t want your kid getting a hold of a gun and using it,” said Yang adding some people might like a “James Bond gun.”

He would also try to beef up mental health programs as two-thirds of gun deaths are suicides.

David Smolen of Conway asked if the Freedom Dividend would lead to inflation.

Yang said that the dividend would be modified over time to rise with inflation. He also claimed that the dividend wouldn’t lead to cost increases for things like restaurants because business competition would prevent gouging. As for the skyrocketing costs of education, housing and health care, those big ticket items would have to be addressed with other programs.

Mel Ingalls of Gilford asked Yang how the Freedom Dividend would be paid for. Ingalls said it would cost about $2.5 trillion per year.

Yang explained that a toll on things pertaining to internet sales and artificial intelligence would generate $800 billion. The dividend would generate roughly $500 billion in taxable economic growth.Then there would be billions of savings on social services like incarceration and homelessness services. Investing in human capital would save $700 billion by improving productivity and mental health. More revenue could also come from taxing data, which is now worth more than oil.

Yang said he had a great time at the Tuckerman’s event.

“I’ve been running for president for awhile and I used to actually break down the $2.5 trillion or so into like chunks and then peoples’ eyes glazed over a little bit — too many numbers, too many numbers — so I’d translate it into something a little easier,” said Yang. “I love digging in.”

On Thursday he went to Northland Restaurant and Dairy Bar in Berlin.

Today, he’s scheduled to go to Carson City, Nev., for a parade.