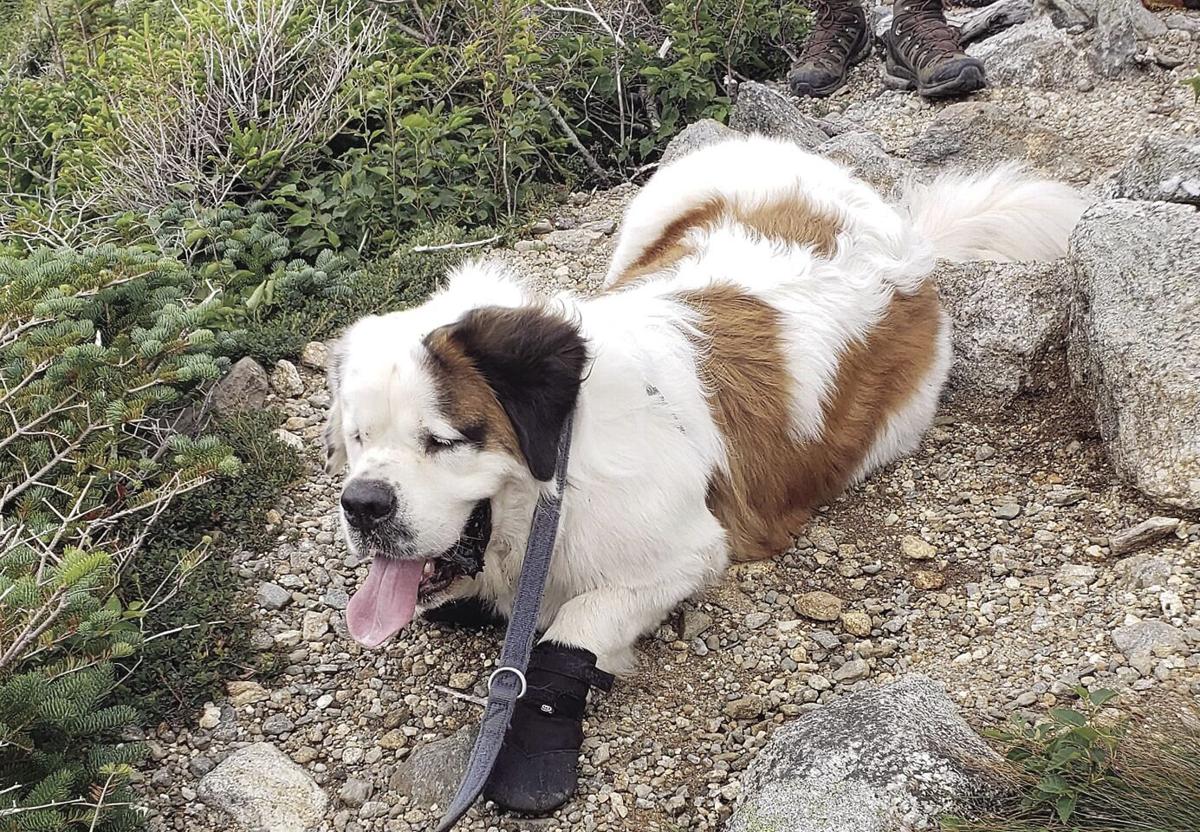 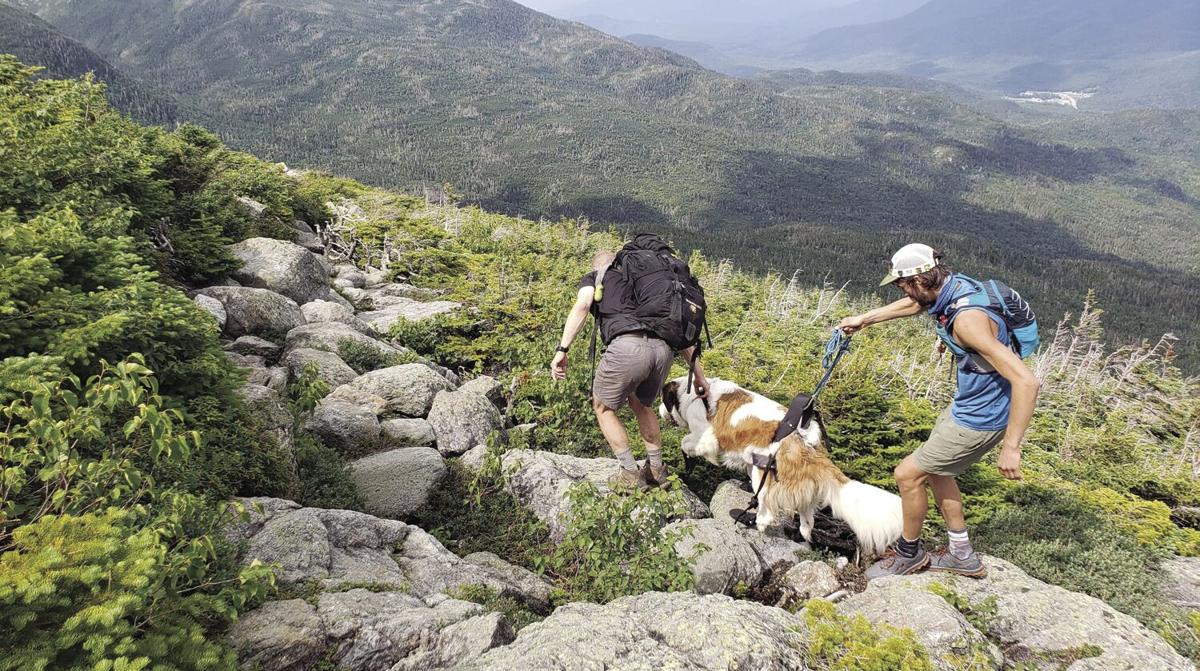 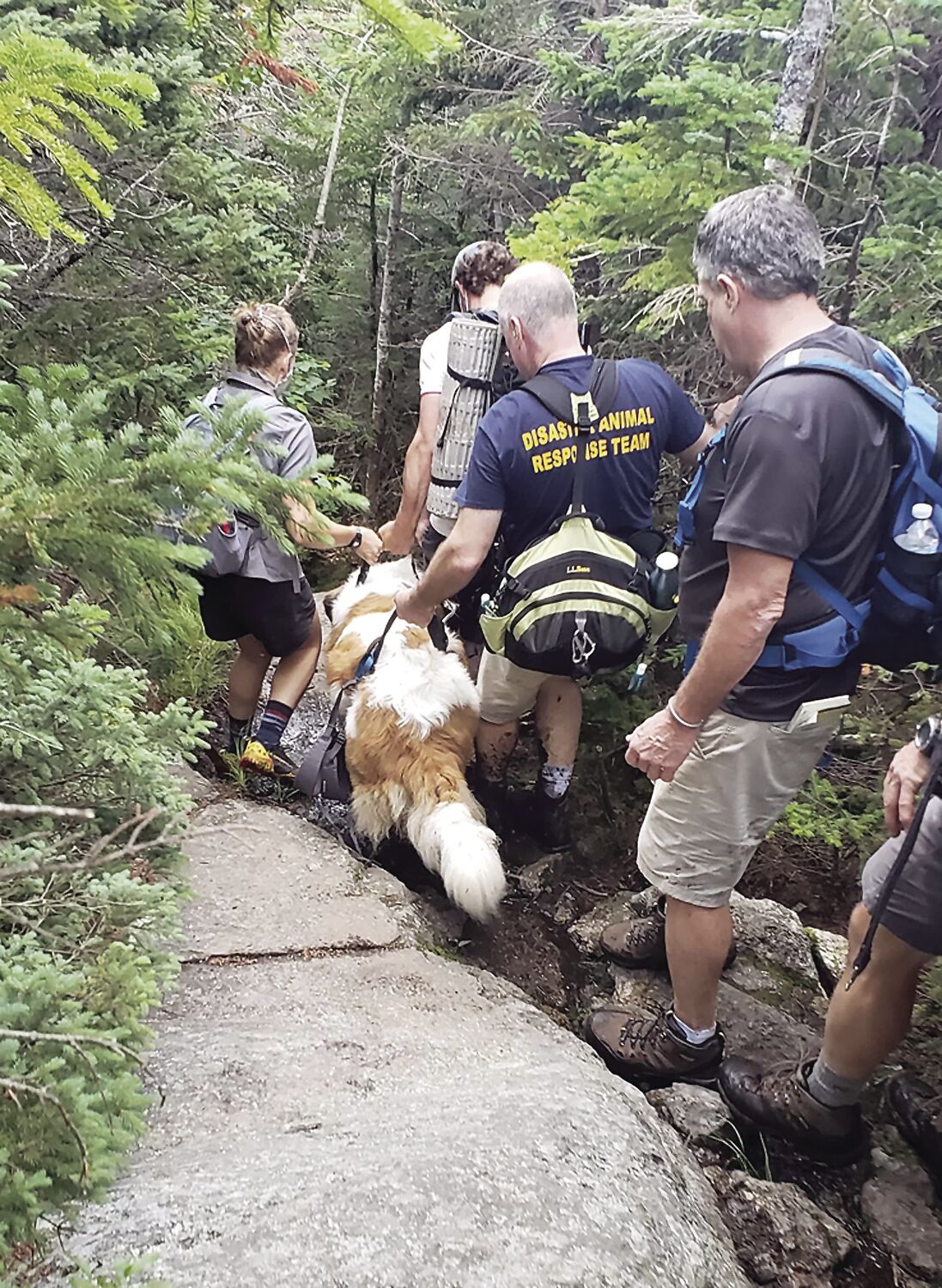 PINKHAM NOTCH — Usually, it’s St. Bernards rescuing people from the mountains, but Tuesday, it was a 150-pound St. Bernard named Jack who needed to be rescued. And what a rescue it was.

Eight people spent nine hours on the Boott Spur Trail on Mount Washington helping the wounded dog and its owner from Pennsylvania down the trail in hot, humid conditions, helping the injured dog and one of its owners down the mountain. The dog had hurt his paws, especially the hind ones, hiking the mountain, rescuers said.

They spent nine hours on the Boott Spur Trail on Mount Washington in hot, humid conditions, helping the injured dog and one of its owners down the mountain. The dog had hurt his paws, especially the hind ones, hiking the mountain, rescuers said.

Brian Ahearn, one of a group of 15 local residents who respond when animals have to be rescued in the mountains, told the Sun on Wednesday: “I got a call from the Pinkham Notch Visitor Center that a man, his wife and their 15-year-old son had been hiking with two dogs, a St. Bernard and a Labrador, or a Labradoodle, up the Boott Spur Trail on Mount Washington on Monday. It got to be late in the day, and they realized the Saint was in trouble.”

Ahearn — a co-owner with wife Kathy of Four Your Paws Only pet store and bakery in North Conway — said the woman, son and the Labradoodle came down the mountain on Monday but that the St. Bernard and the man spent the night above treeline, roughly 5 miles up Mount Washington.

The family's names were not released.

“When I got the call and heard the dog wasn’t able to walk and that it might have a broken nail, I got the gauze and booties, and Kathy called the other members of the team,” Ahearn said.

While there are 15 rescue volunteers, and many of them serve on the White Mountain Disaster Animal Response Team which does not respond to mountain rescues, on Tuesday, just Ahern, Joanne Purnell and Steve Zimmerman were able to attend, while Kathy Ahearn worked remotely, staying in contact, making sure everyone was OK.

Ahearn credits the Pennsylvania-based family with being well-prepared for the elements, even if they needed to spend the night on the Rockpile.

On Tuesday, with temperatures in the mid-80s, Ahearn, Purnell and Zimmerman arrived at the base of the trail just before noon. The trio, equipped with a stretcher and other rescue gear, got additional help from four people from the Appalachian Mountain Club who were not working at the time.

While the AMC folks trekked up at a good clip, Ahearn shared that “we’re not hikers, we were there for the dog. We took our time. Some of the trail was extremely difficult. The first portion was almost like climbing up a ladder 30 feet straight up. The Boott Spur Trail is not for the faint of heart.”

It took 3 1/2 hours for everyone to reach Jack and his owner.

Of the dog, Ahearn said: “His feet were torn up pretty badly. The rocks in the summer with this kind of heat are like sandpaper to a dog’s paws. All four feet needed treatment, and he had a ripped toenail. He was in pain and didn’t want to move.”

Ahearn estimated Jack to be about 3 or 4 years old. Other than his paws, “the dog was in pretty good shape,” he said.

Ahearn and the volunteers tried to get the dog onto a stretcher, but “he was having nothing to do with that.”

He added: “It was difficult. There was a lot of hand passing, but it went very well thanks to the volunteers from the AMC. I’ve got to give credit to the dad because he never got off the strap (on the sling). He was fantastic.”

“It was a long day, and I’m a little sore today,” he said. “But this is what we do when we can help animals.”

Ahearn said the family, which was staying in North Conway on vacation, planned to take Jack to a local veterinarian for a check-up.

He added that he'll never forget the dog's name. "Every few feet, we were encouraging him, ‘Come on, Jack, you’re a good boy, Jack.’ It was a long day, and I don’t think I’ve ever said a dog’s name so much in a day.”

Kathy Ahearn said Jack’s family was appreciative of the response by the volunteers.

“They thanked everyone many times,” she said. “They were very kind and grateful. They were prepared, and this is such a common injury on the trails. They weren't irresponsible, they just didn't realize that could happen.”

The Ahearns on July 12 posted a public service announcement on their Facebook page about the summer hiking and the impact it can have on man’s best friend.

“Emergency assistance is not always available when a dog gets hurt out on the trail, so be sure to bring: clean water, water bowl, high energy treats, pet first aid kit, bandages, dog boots, Benedryl and bug spray. Make sure your dog has ID tags on their collar and you have a Hike Safe card on you.

“Other than heatstroke, the most common injury we hear of, is dogs tearing up the pads of their feet due to the rough granite on the trails. Most can’t walk back down the trail and have needed to be carried back down the mountain. Having assisted in that kind if situation before, we can tell you from experience — that is not easy. Please...be prepared and bring dog boots, gauze bandages, and vet wrap to wrap their paws in if they can’t walk.”

“This happens frequently and people need to be prepared to treat it,” Kathy Ahearn said. “Ninety percent of the calls we respond to are because the pads are torn up, the dog can't walk and they do not have the provisions to take care of it. We show up with bandages, put on dog boots — they end up walking out.”