The SAU 9 Active COVID-19 Dashboard has never looked as active as it did on Tuesday morning. (LLOYD JONES PHOTO) 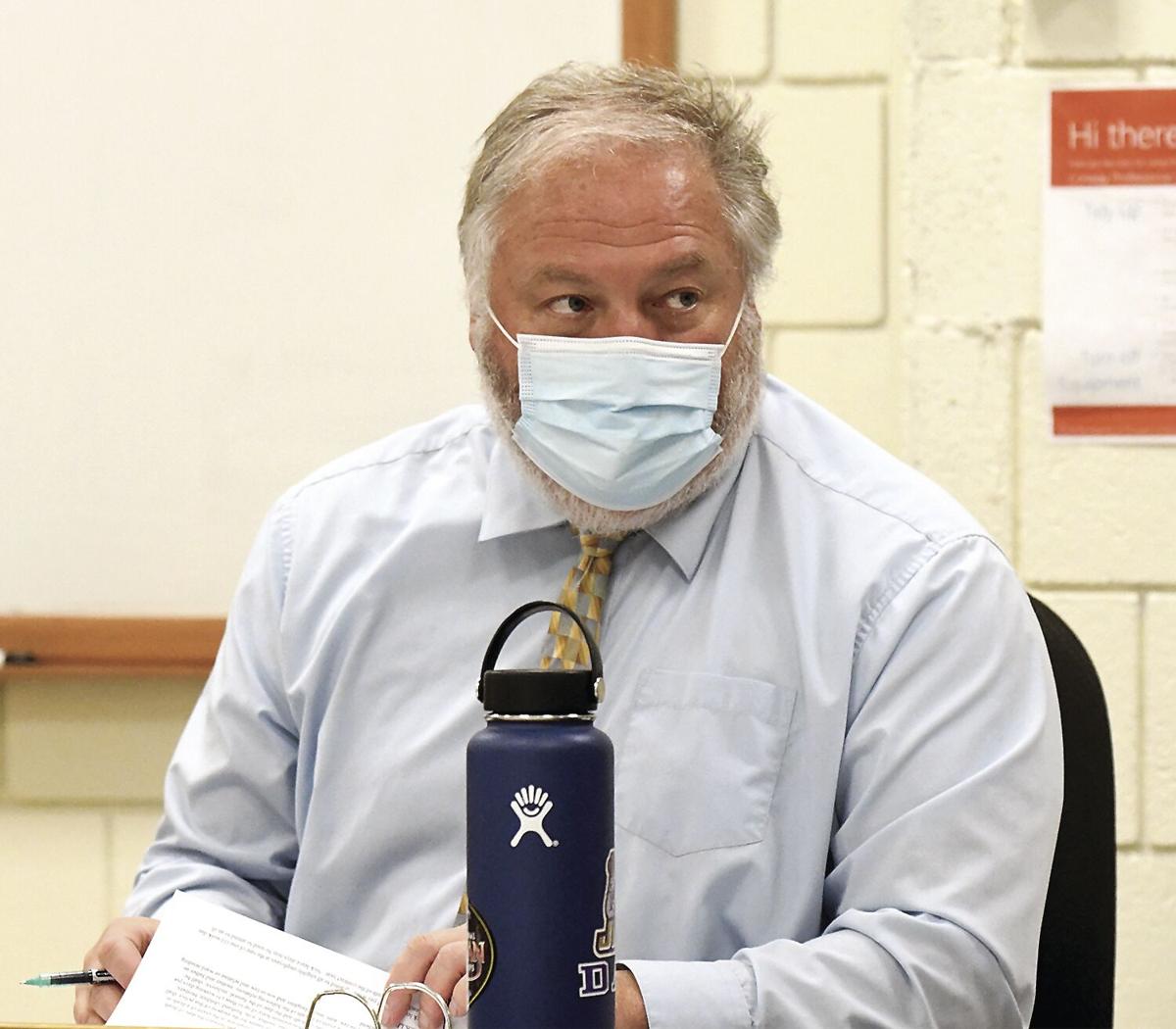 Superintendent Kevin Richard talks with the Conway School Board on Monday about the increase in COVID-19 cases in the district. (LLOYD JONES PHOTO)

The SAU 9 Active COVID-19 Dashboard has never looked as active as it did on Tuesday morning. (LLOYD JONES PHOTO)

Superintendent Kevin Richard talks with the Conway School Board on Monday about the increase in COVID-19 cases in the district. (LLOYD JONES PHOTO)

CONWAY — SAU 9 has topped 100 positive COVID-19 tests so far this school year, and school officials say they may be close to enacting more restrictive measures on campuses.

Richard and fellow administrators were told in August by State Epidemiologist Dr. Benjamin Chan that the Granite State would likely see a spike in COVID cases by mid-October due to the Delta variant of the virus.

“Sadly, we’re still trending upward,” said Richard. “This is a longer duration of an upward trend than we experienced at any time last year. Last year, we saw a period of about three weeks from Dec. 8-22 and again in April, but never this many cases.”

Over the past two weeks, six of the seven schools (none in Jackson) saw cases skyrocketing from 38 on Oct. 12 to 108 as of Tuesday morning.

There were 53 active cases as of Tuesday, and Richard said five of those were staff members.

The SAU 9 Active COVID-19 Dashboard is updated online after 4 p.m. As of Tuesday, there were 20 active cases at Kennett High; eight at Pine Tree; six at Josiah Bartlett; seven at Kennett Middle; seven at Conway Elementary; and five at John H. Fuller, which had been case-free until last week.

Jackson's last positive case was back in February.

SAU 13 (Madison, Freedom and Tamworth schools) does not report COVID cases on a dashboard.

The state’s COVID dashboard had been down for a few days.

“The COVID-19 Dashboards are undergoing scheduled maintenance and are currently unavailable,” the site states. “We apologize for this extended time frame. We are working as quickly as possible to complete the maintenance.”

“We’re seeing a combination of asymptomatic and symptomatic people,” Richard said of the level of reported illness from the virus.

Richard spoke about the case increase at the Conway School Board meeting on Monday.

“No surprise, the numbers in the county are really high, and the numbers in the school are rising,” he said. “Highest we've seen since the beginning of the pandemic. Staff is doing their best, trying to keep everybody in school. And our nurses are working overtime, trying to contact trace and just let people know.”

He added: “We have not made huge changes yet (to in-person classes and activities). We're kind of leaning in that direction.”

“It could have an impact on athletics,” he said. “We may have to restrict cohort interaction. We’ve already reconfigured Project SUCCEED (the before- and after-school program at Conway Elementary, John H. Fuller and Pine Tree).”

Richard said a big concern is having enough staffing. Recently, up to 15 staff members were out on a Monday, leaving officials scrambling to find personnel to oversee classrooms. The school board recently addressed the situation by upping substitute teacher pay from $85 per day to $125.

“We need people,” Richard said, adding that the increase in cases has temporarily closed some day-care facilities and “put a strain” on medical providers.

“The good news is that most of the staff, if not 90 percent of them, are vaccinated, so they aren't necessarily having to be out for a big period of time. It's more caring towards their family members and impacting in other ways," Richard said.

Last year, there were 132 total positive cases of COVID between the seven schools, which led to 1,238 incidents where a cohort (small pod of students) had to quarantine or isolate. This did not include schools having to transition to remote learning due to staffing shortages.

Under green, masks are optional. Under yellow, masking will be based on current indicators and state and federal guidelines. If a school reaches red, masks will be required at all times.

Conway has been in the yellow zone since the start of the school year.

"We're getting closer to red," Richard. "We're trying to prevent that from happening, but it's going to take all of us."