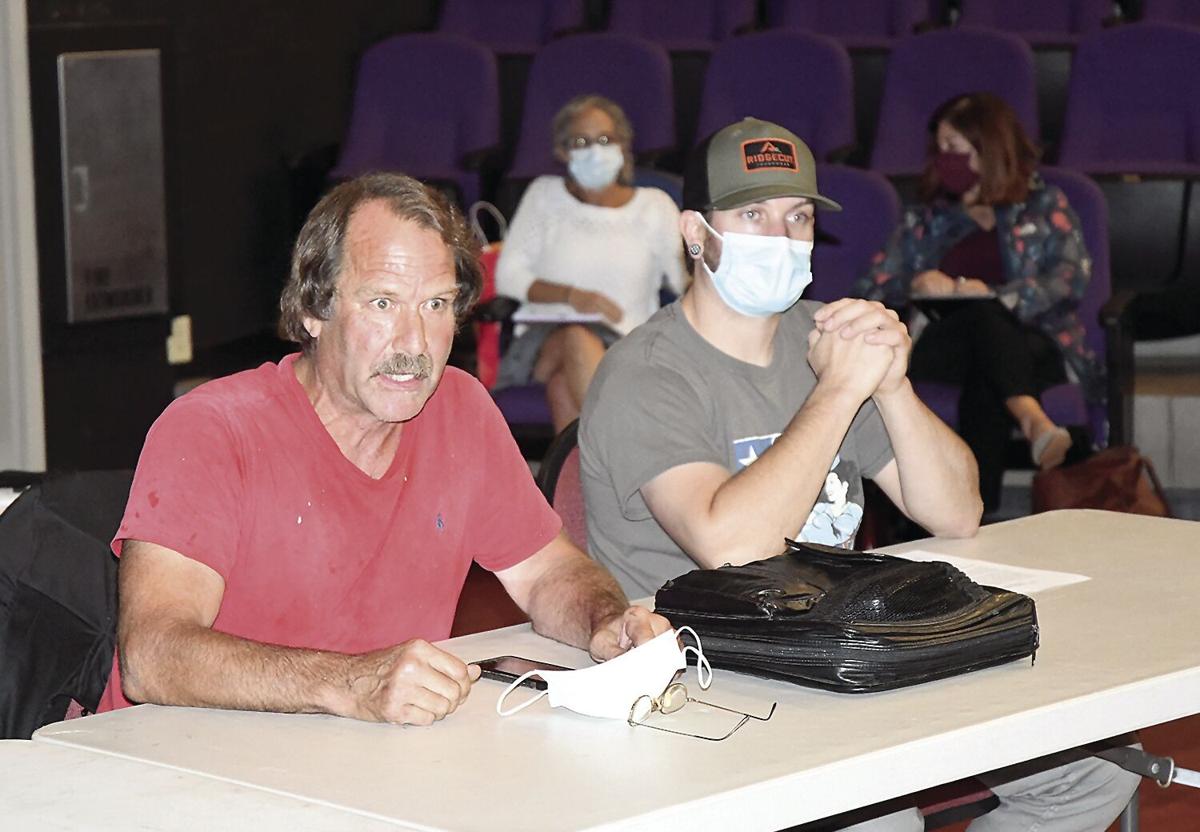 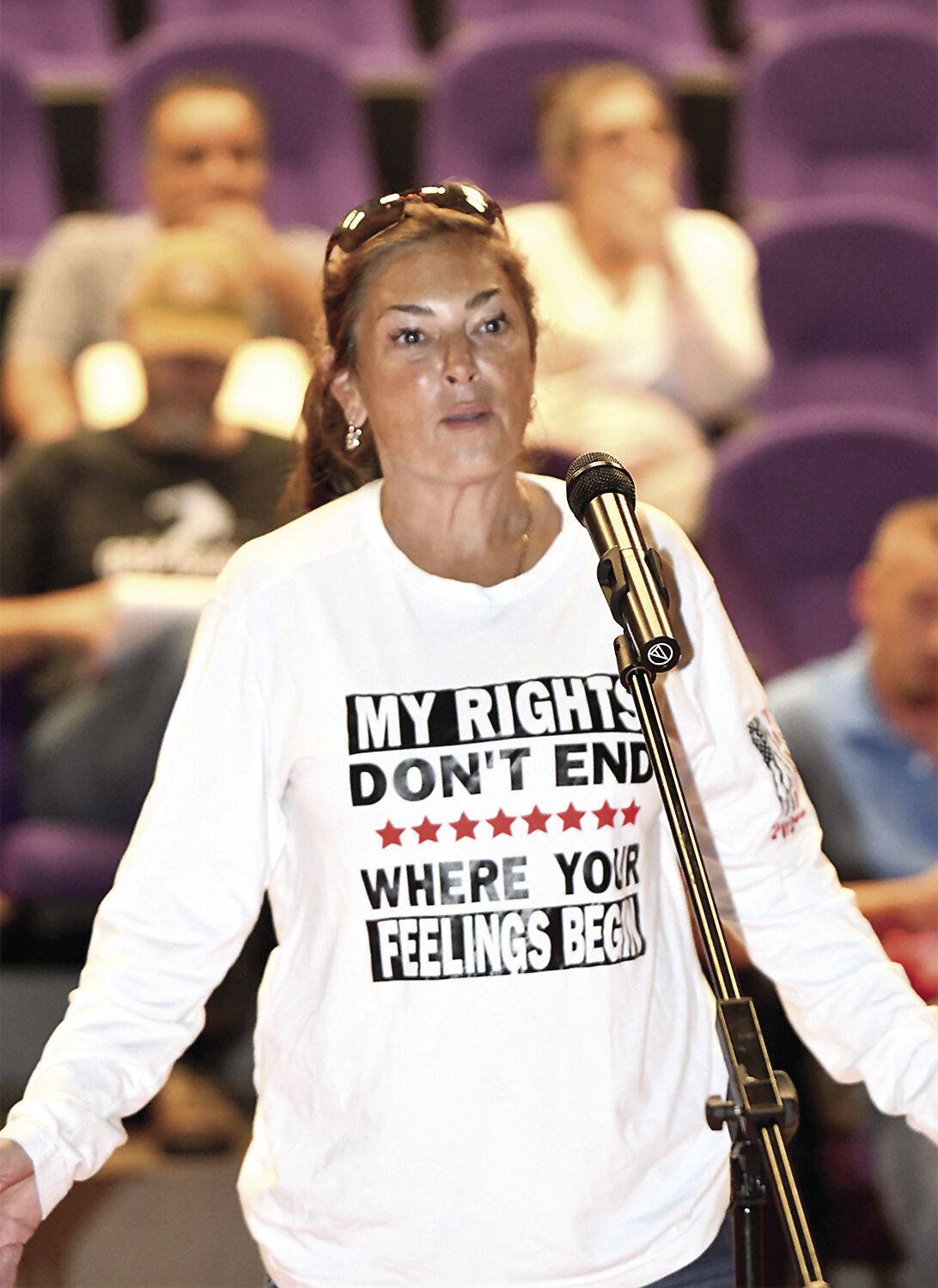 Nella Thompson of Eaton believes the SAU 9 Board is lying to citizens. (LLOYD JONES PHOTO) 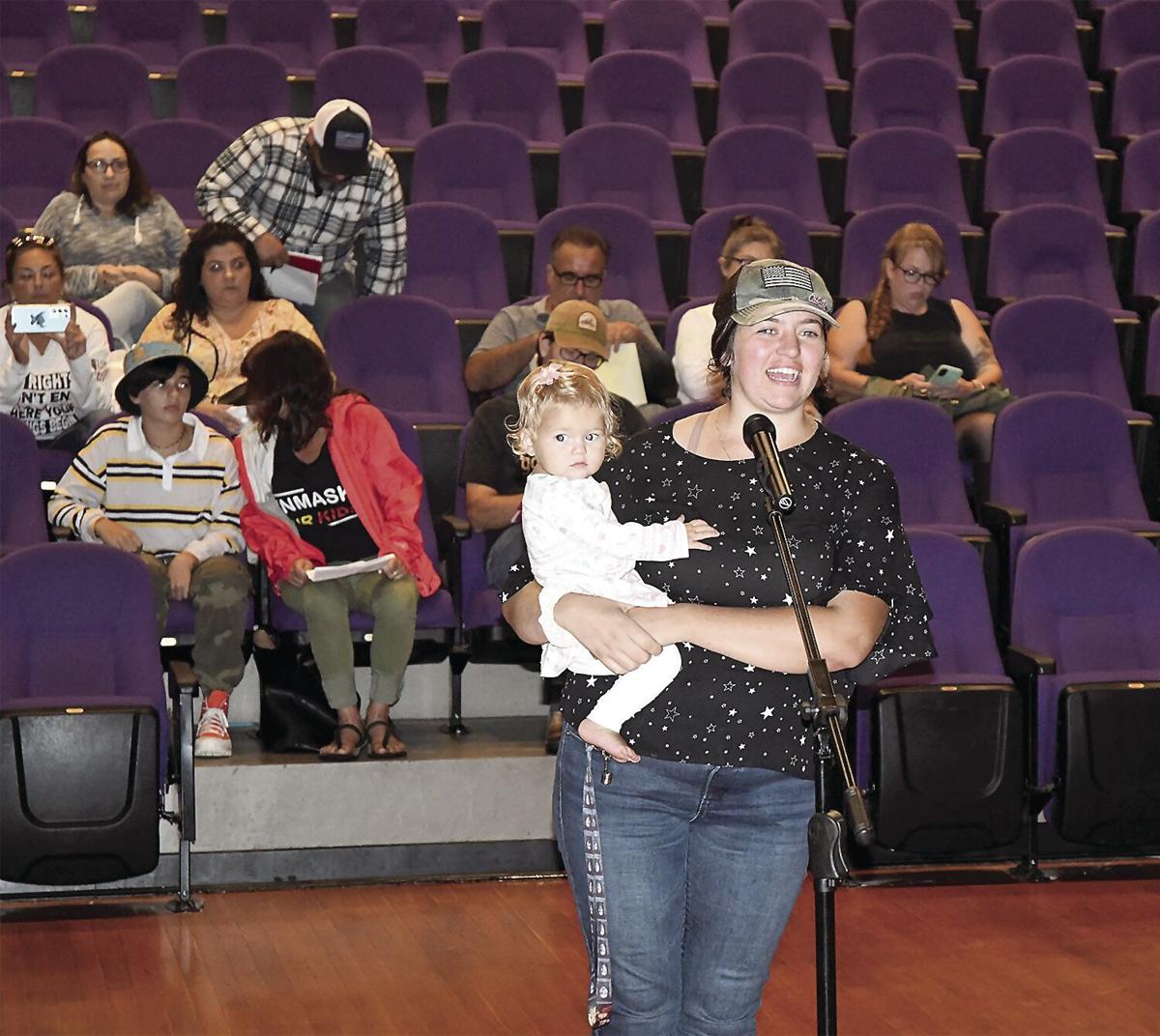 Cassie Cox holds her daughter Clover and addresses the SAU 9 Board Thursday night in the Loynd Auditorium at Kennett High School. She wished the board would be more welcoming of citizens at its meetings. (LLOYD JONES PHOTO) 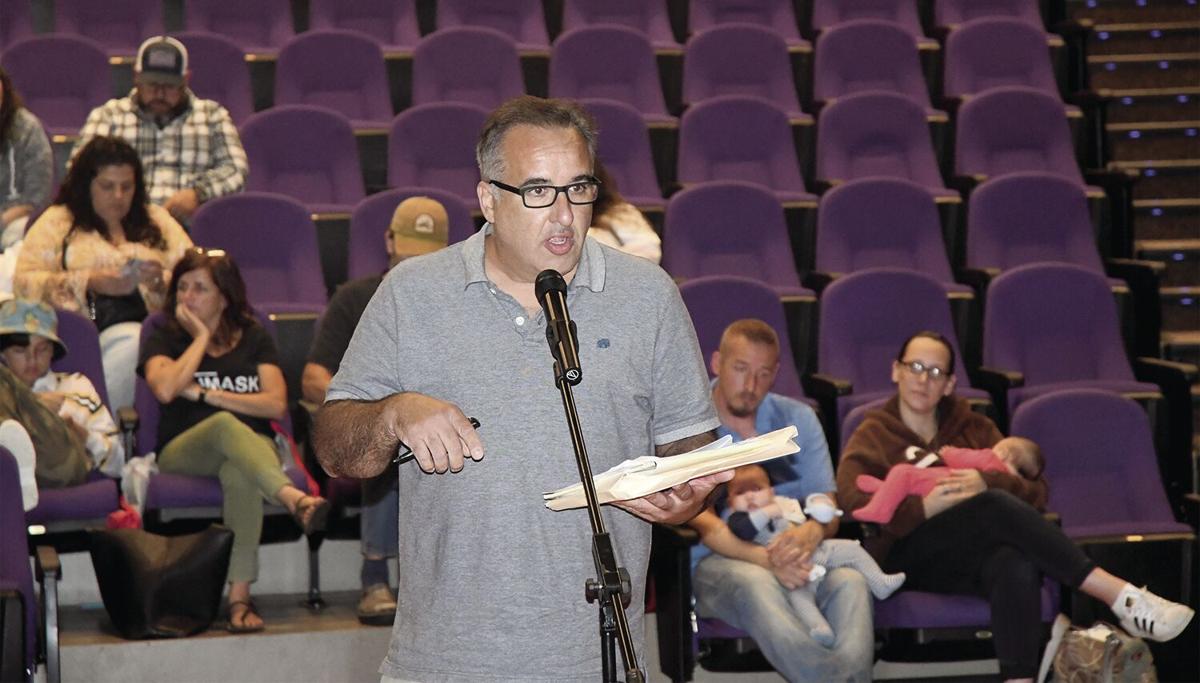 Madison resident Kevin Clifford applauded the SAU 9 Board members who voted in the majority to defeat a public comment policy. (LLOYD JONES PHOTO)

Nella Thompson of Eaton believes the SAU 9 Board is lying to citizens. (LLOYD JONES PHOTO)

Cassie Cox holds her daughter Clover and addresses the SAU 9 Board Thursday night in the Loynd Auditorium at Kennett High School. She wished the board would be more welcoming of citizens at its meetings. (LLOYD JONES PHOTO)

Madison resident Kevin Clifford applauded the SAU 9 Board members who voted in the majority to defeat a public comment policy. (LLOYD JONES PHOTO)

That might be the best way to describe last Thursday's SAU 9 Board meeting, when tempers flared during public comment on children having to wear masks at school. Heightened emotions led several audience members to curse at the board, hurling F-bombs and other swear words.

“I’ve been to hundreds and hundreds of meetings over the years here, and I never really heard the level of profanity directed at people” as on Thursday night in Kennett's Loynd Auditorium, Superintendent Kevin Richard said Tuesday.

Bibbs Dutton of Madison said she fears masks are just the beginning of a series of mandates coming down the road. “We’re not stupid f---ing people. Excuse my language, it’s not on video, so it’s OK,” she said.

However, at Monday's Conway School Board meeting, Dutton apologized for her choice of words.

Another potty-mouth last Thursday, John Thompson, a parent from Madison, was concerned that the district might start offering PCR COVID-19 tests for students. He said the tests cause HIV and cancer and that they are “f---ing dumb."

This occurred on a night where the SAU 9 Board — which has 29 members from Albany, Bartlett, Chatham, Conway, Eaton, Hart’s Location and Jackson — wrestled with adopting a public comment policy. Just nine members of the board attended Thursday’s meeting, and for a while, it looked like a quorum might not be reached. Representatives from four towns must attend in order to have a quorum.

Albany has two members on its board — Daniel Bianchino and Tim Sorgi. Sorgi attended Thursday’s meeting.

Bartlett had the best representation with Emily Calderwood, Scott Grant, Nancy Kelemen and Andrew Light on hand. Rob Clark did not attend.

Eaton, with three seats, had just Monica Hebert attend; Chris Kennedy and Susan Wiley did not.

About 20 citizens attended Thursday’s meeting. The majority of those said they want to see masks made optional.

With the increased turnout, public comments have dominated recent meetings, with two comment periods on the board agendas.

On Thursday, the SAU 9 Board debated the merits of a public comment policy crafted by the New Hampshire School Board Association. It essentially calls for all public comment to be limited to 15 minutes at each point on the agenda and asks that people speak for no more than 3 minutes at a time. The board may, however extend the public comment period at any of its meetings.

Kelemen, chair of the SAU 9 Board, read the policy for those on hand. It was not well-received by audience members along with a few board members.

“I’m concerned about limiting people's right to speak,” Davison said, which led to cheering and clapping in the audience. “We live in a democracy. I’d have a real concern imposing this policy on a United States citizen.”

Grant was suspicious of the timing of the policy.

“Why are we limiting people?" he asked. "I don’t care which side of the aisle you’re from or if you agree or disagree with them, I think it’s not transparent and you’re not listening to anyone. I have a major problem with this.”

“First, I agree with my brother from Bartlett on that and with Randy that people should not be restricted from commenting,” he said. “Is this a draft the N.H. School Board Association had on file or is recommending?”

Richard said it is a policy recommended by the association.

Sorgi thought it was a “little bit too personal” to ask people for their physical address when commenting but felt it was OK to ask what town a person was from “so they had skin in the game.”

Kelemen said the recommendation by the association was to “establish guidelines” for current and future boards.

“I totally agree that there need to be some guidelines, but we have to remember that the public is basically who we serve,” Sorgi said.

“Part of the problem here is that the SAU 9 Board has 29 members. Where are they?” Grant asked.

He added that letting people speak for only three minutes was outrageous and suggested "passing over the policy or simply voting it down.”

“I have been on this board for many years, and I have never seen as many parents voice issues since I’ve been on the board,” he said. “We are here to serve the community, and if there were people who were on the other side (in support of the policy), so be it, they should be here at this table.”

Grant called for the question and Sorgi offered a second. The policy was defeated 5-4 with Davison, Grant, Hebert, Light and Sorgi in the majority, while Calderwood, Ference, Kelemen and Lentini in the minority.

During the second public comment period, Madison resident Kevin Clifford applauded those in the majority for “stopping a plan to squash free speech.”

“What you were trying to pass was just a way to kind of shut us up,” said Seth Allen of Bartlett, “and that’s how we all see it.”

“Every time we come here it’s like you are trying to pull some kind of crazy stunt to keep us quiet,” Nella Thompson of Eaton said, adding, “I feel like we’re being lied to and that you guys are trying to backdoor s--t.”

Why are people offended by, "curse", words in this day and age?

It seems funny to me that the generation of lawmakers that is offended is also the generation that is pushing NHHB629 to legalize marijuana use and allow growing it at home.

If someone tosses a swear your way while attempting to get their point across, you may want to point your ears up instead of your nose. F*@king understand?