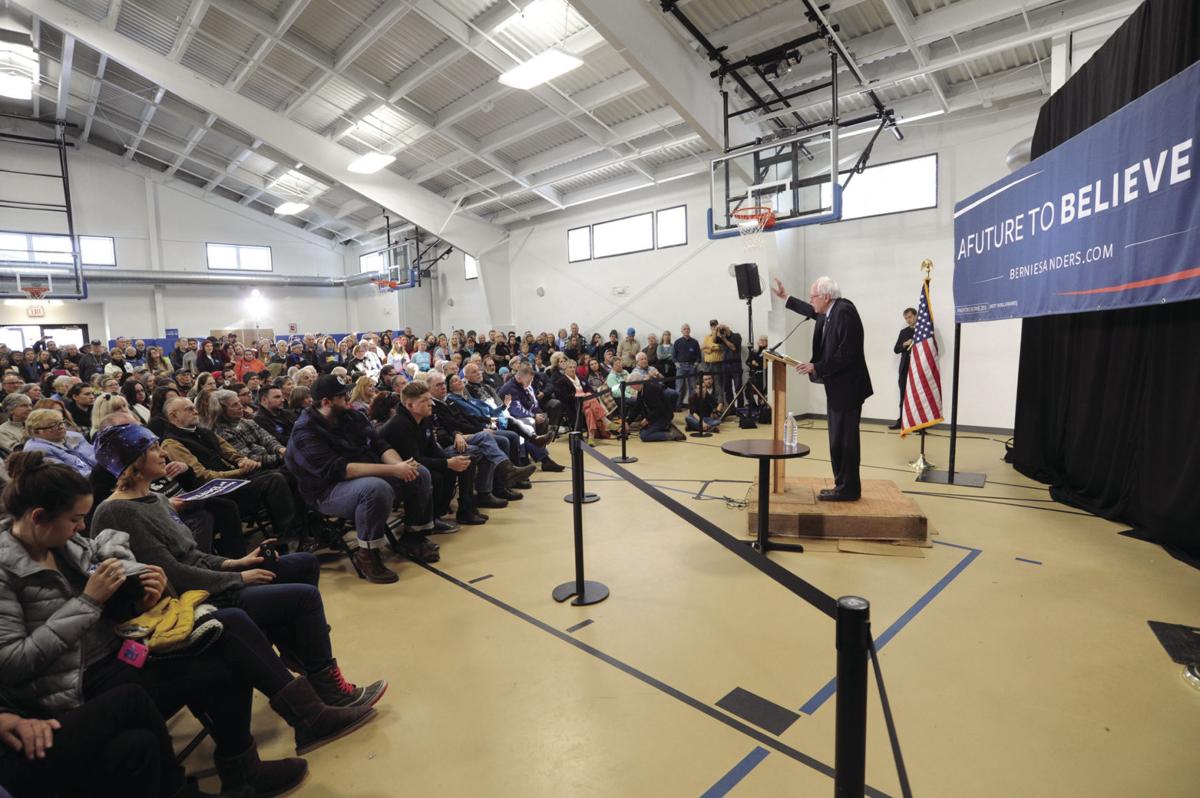 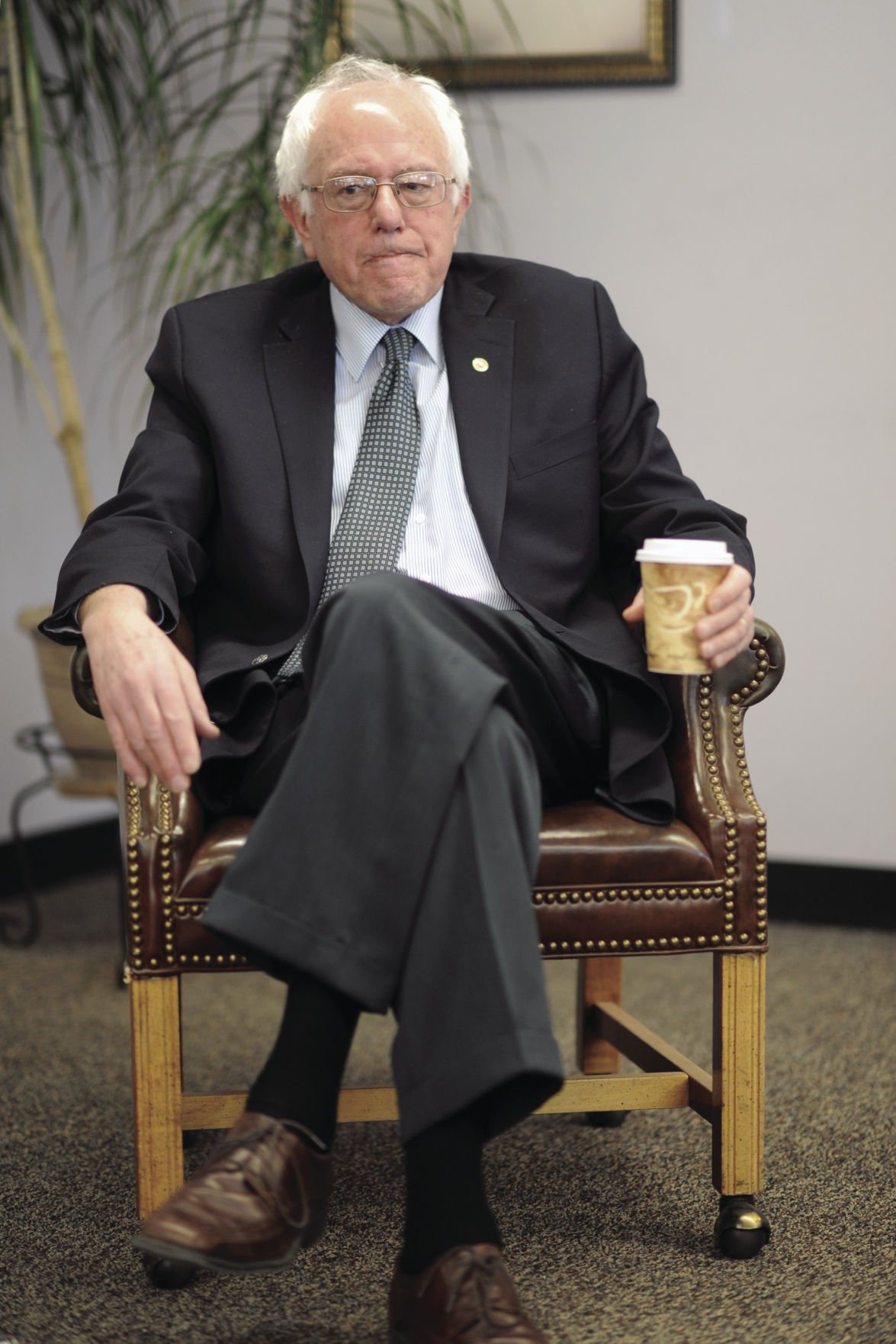 Sen. Bernie Sanders (I-Vt.) attended an editorial board at the Sun in January of 2016. (JAMIE GEMMITI PHOTO)

Sen. Bernie Sanders (I-Vt.) attended an editorial board at the Sun in January of 2016. (JAMIE GEMMITI PHOTO)

CONWAY — Are you ready to feel the Bern again? Sen. Bernie Sanders (I-Vt.), who owned Conway in the 2016 New Hampshire Primary, is hoping voters here are still in his corner as he plans a campaign stop in North Conway on Monday.

Sanders is scheduled to come to North Conway for a town hall meeting in the North Conway Community Center on Monday at 7 p.m., as part of a two-day tour of the North Country to campaign for the Democratic nominee in the 2020 election.

In January 2016, Sanders was the first candidate to hold an event in the community center after it had just opened its doors.

Sanders, 77, is slated to be in the northern half of the Granite State for two days, Monday and Tuesday, with four events planned. On Monday, he will hold a town hall meeting at the Wolfeboro Inn at 5 p.m.

He will follow that up with the town hall in North Conway at 7 p.m. (doors open at 6 p.m.) at the community center.

“North Conway, join Bernie for a town hall this Monday at 7 p.m.,” Bernie Sanders’ Facebook page states. “This is what democracy looks like — all of us coming together to create a government and economy that works for the working people of our country, not just the Top 1 percent.”

Both events are free and open to the public. RSVPs are encouraged but not required. You can RSVP at tinyurl.com/y23g8cnp.

On Tuesday, Sanders will take part in a “Breakfast with Bernie Town Hall” at the White Mountain Chalet in Berlin at 10 a.m.

Sanders is scheduled to cap his stops in New Hampshire by attending an ice cream social at the Littleton Opera House in Littleton at 1 p.m.

In the 2016 presidential race, Sanders spoke three times in the Mount Washington Valley.

On May 1, 2016, Sanders threw his hat into the presidential ring. He was the first official presidential candidate to stump in the Mount Washington Valley that election season, delivering a speech at the New Hampshire AFL-CIO Convention at the White Mountain Hotel and Resort on West Side Road on May 2.

On Aug. 23, 2016, a crowd of about 750 people turned out for Sanders’ town hall meeting in the gymnasium at the Kennett Middle School. There was such a demand to see the candidate that the event was moved from the school’s cafeteria to the gym. It was the largest turnout for a campaign in the Mount Washington Valley that election season.

In 2016, during the first-in-the-nation New Hampshire Primary, in Conway, Sanders nearly doubled the tally of former Secretary of State Hillary Clinton, 1,175 to 609.

Sanders visited the Sun on Jan. 22, 2016, and was asked where his passion for social justice stems from. He said he was born in a family without means. From age 6 or 7, he learned the importance of money by overhearing his parents arguing about finances. He said that lower-income people die sooner than those with more means because of the stress of being poor. They have to worry about the rent, putting gas in the car or lost wages when they stay home from work when their child is sick.

California Sen. Kamala Harris was fourth with 8 percent, and South Bend, Ind. Mayor Pete Buttigieg was at 6 percent, while the rest of the field was at 2 percent or less.

On Feb. 19, Sanders announced on Vermont Public Radio he was running for the 2020 presidential election.

“We began the political revolution in the 2016 campaign, and now it’s time to move that revolution forward,” he said. “It turns out that many of the ideas that I talked about — that health care is a right, not a privilege, and that we’ve got to move toward a Medicare-for-all, single-payer system: very, very popular. The idea that we have got to raise the minimum wage to $15 an hour. When I talked about making public colleges and universities tuition-free and lowering student debt, that was another issue that people said was too radical. Well, that’s also happening around the country.”

Sanders pulls no punches when talking about President Donald Trump.

“We have a president who actively demonizes racial and religious minorities, who coddles Nazis and Klansmen, and who wields white supremacy as a political weapon,” he Tweeted on Monday.

“It gives me no pleasure to say this, but we do have a president who is an overt racist, who is a sexist, who is a xenophobe ... who thinks that he can win votes by demonizing one group of people or another,” Sanders said in an interview of Sirus XM radio on Wednesday.

Thursday afternoon on his Facebook page, Sanders, wrote, “We need a president who is going to stand up to the NRA, not one who stands with them as more Americans are killed every day from gun violence. When we are in the White House, we are going to pass common-sense gun safety legislation.”

Asked in 2016, by the Sun, which three people throughout history he would like to have dinner with Sanders replied, “It depends what they like to eat.”