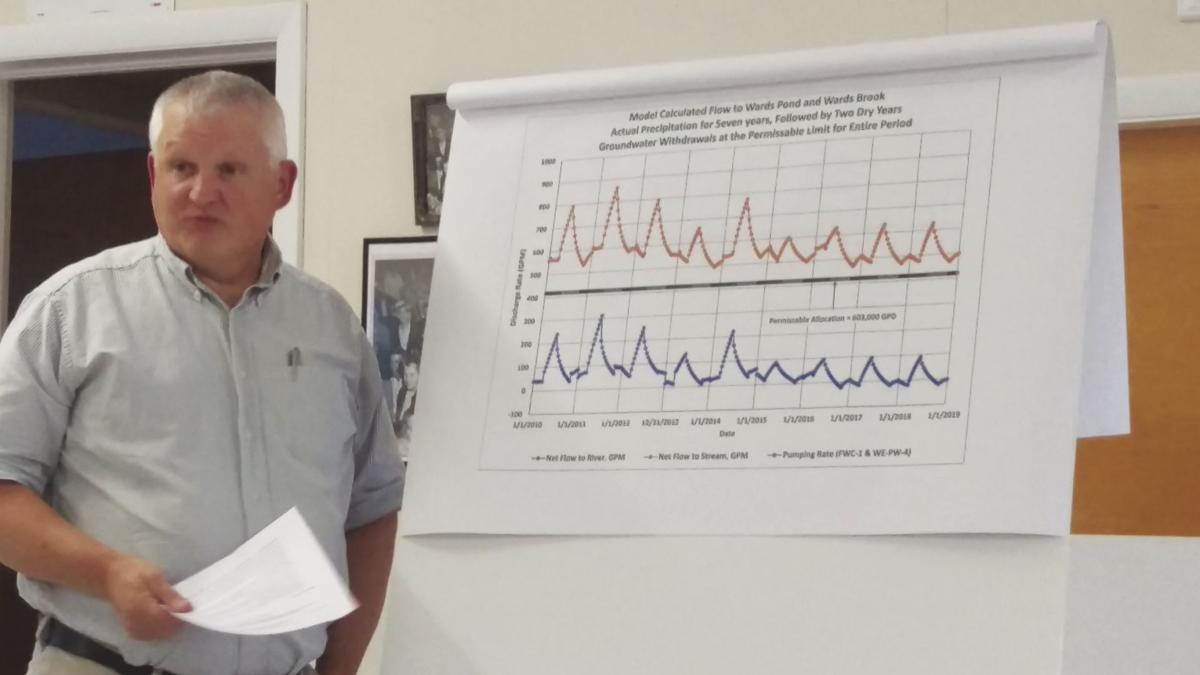 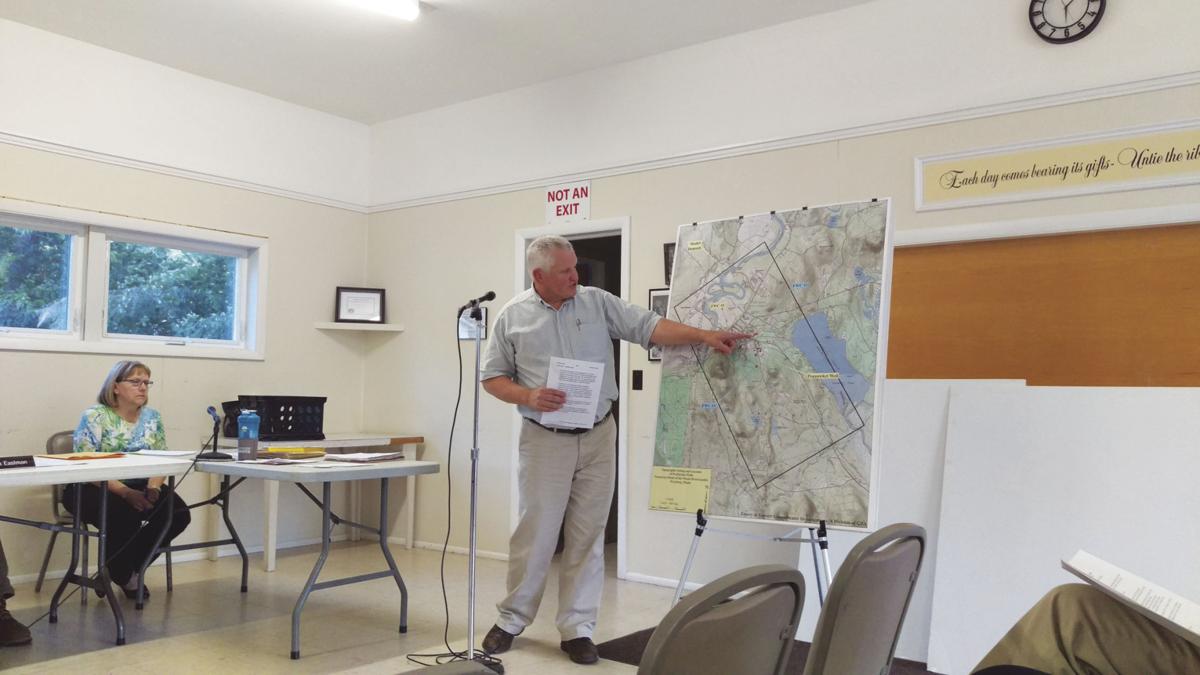 That was according to Dan Tinkham, senior hydrogeologist with Emery & Garrett Groundwater Investigations of Meredith, who made the case to a packed room in the American Legion Building.

Poland Spring, a division of Nestle Waters North America, takes approximately half of the maximum permissible commercial extraction rate of 603,000 gallons per day.

According to the study, it would take an extraction rate of 804,000 gallons per day under prolonged dry conditions to make the aquifer unstable.

At the outset of the hearing on the study, selectman’s chair Rick Eastman announced that "tonight is not the night for questions.”

He added that it would be premature to raise questions before the final update report was complete and available to the public, though he did not say when that would be. Copies will be available at the town office at that time and a special town meeting will be called to discuss it.

The original study was done in 2005 by Emery & Garrett, and it was supposed to be reviewed in about 10 years.

Tinkham said the 2005 study of the aquifer tried to find the sustainable yield with an “an early numerical study.” This was done to balance the needs of the public water supply and bottled water withdrawals.

That study was “robust” and came out with a “safe, sustainable capacity of about 603,000 gallons per day that could be removed from the aquifer,” Tinkham said.

However, the model for that study had limitations because it didn’t have long-term data of groundwater and surface water records, he said.

This new study aims to correct that issue with around 15 years of data from “groundwater levels collected regularly” and “surface water inputs.” Also, the data were collected over differing climatic conditions and withdrawal rates.

The study’s update cost $34,000; most of that came from fundraising.

Tinkham said the aquifer “probably holds hundreds of millions of gallons of water,” and the water that isn’t pumped out is eventually discharged into Wards Pond and then Lovewell Pond.

The source of the aquifer is “primarily rainfall,” said Tinkham.

“The numerical model is nothing more than a simulation of what we see in reality,” said Tinkham, describing how his company was able to find their results.

Tinkham said the team split up the aquifer’s geology into “lots and lots of little tiny cubes.” Each cube has its own water flow characteristics and “you have thousands of these little cubes interacting with one another … we know water has to move from one to another based on these characteristics,” he explained.

Type of ground material and depth also was taken into consideration as water moves and is stored differently depending on what’s underground.

Tinkham showed selectmen a collection of graphs based on the model that Emery & Garrett used in their simulations under different conditions.

One chart showed hand measurements at a monitoring well versus measurements the computer model said the water level should be over a seven-year period between 2010-17.

This contrast between actual measurement and the computer’s prediction was a calibration of the computer simulation to see if “the water table will respond with how we think it’s going to respond.”

"You finally get to a place where the model can predictably tell you water levels,” Tinkham said.

Data between 2010-17 were used because there was a good distribution of precipitation: a dry 2013, a wet 2011 and other average years according to Tinkham. Along with “stress periods” reflected in seasonal changes, the model could predict “estimated recharge rates based on precipitation,” he said.

The Fryeburg Water Co. withdrawal has been fairly consistent; in 2002, it was estimated they wouldn’t use more than 367,000 gallons a day.

Tinkham said the “missing link in the data” so far is the exact amount of water flow down Wards Brook. There haven’t been measurements because it’s hard keeping a measurement device in the stream stable. Finding this flow data is a recommendation for the aquifer’s future study.

Based on the model calculated in their investigation, Emery & Garrett put the aquifer through varying conditions and scenarios.

“This is how we put a lot of stress on the model; we pump full permissible volume, which we’ve never done before for that whole period and keep the precipitation pretty low,” Tinkham said, adding that even under this worst-case scenario “things are pretty good.”

Tinkham said based on the model, water can be withdrawn at 600,000 gallons a day and remain in a “steady state.”

To further test aquifer resiliency, another extravtion model was based on the whole seven-year period at 603,000 gallons per day, with two drought years in 2018 and 2019. This, too, was stable.

But Tinkham also wanted to try a more extreme hypothetical 804,000 gallons-per-day extraction model for the seven-year period, which was first recommended as a sustainable extraction rate in 2005. The result was “there’s a lot less water … things aren’t quite stable,” said Tinkham, and a very low 400 gallons per minute going through Wards Brook in the final two drought years.

“So we think the 600,000 gallon per day withdrawal, putting it into a model of wide-ranging climatic conditions — we feel pretty comfortable that that’s a number we can stick with,” Tinkham concluded.

Selectman Kimberly Clarke liked the presentation and recommended in the future that red and yellow zones equating levels of danger be used on the graphs, showing “a point where we need to be worried without stopping extractions.”