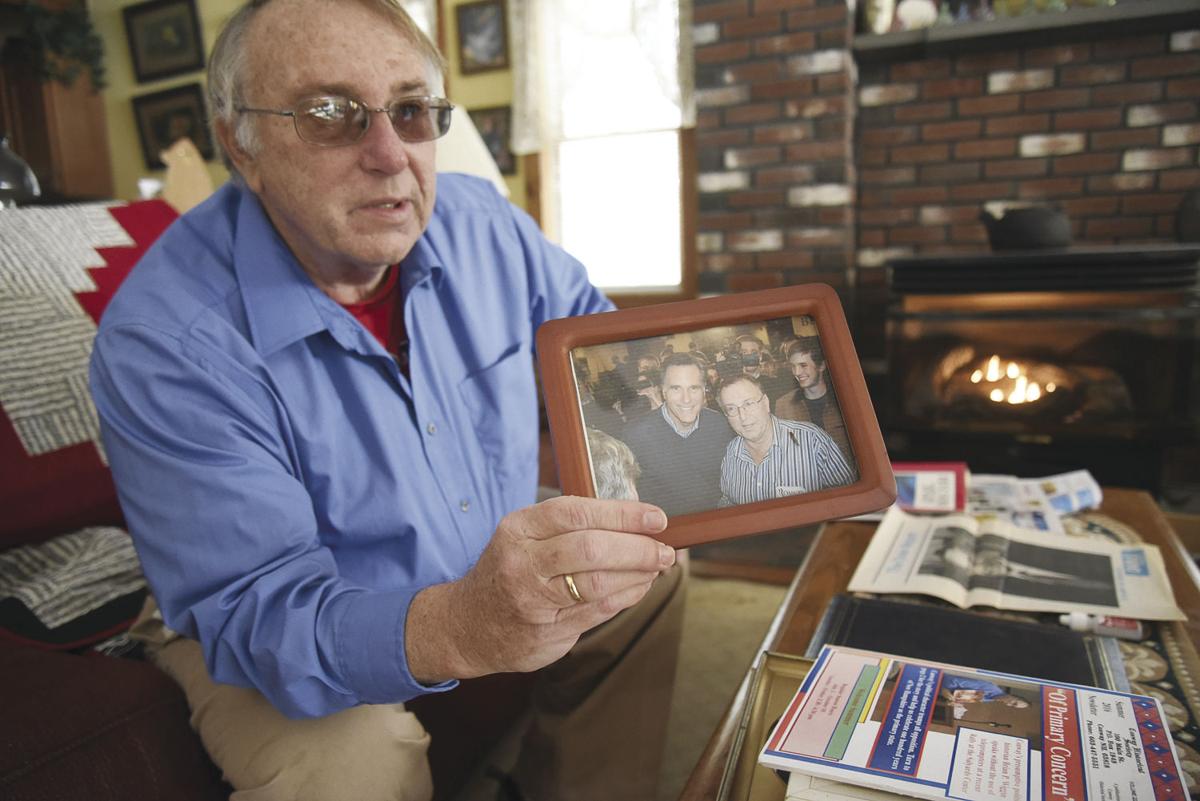 Brian P. Wiggin shows a picture of himself with Mitt Romney from the 2007 primary election at his Conway home Tuesday. (JAMIE GEMMITI PHOTO) 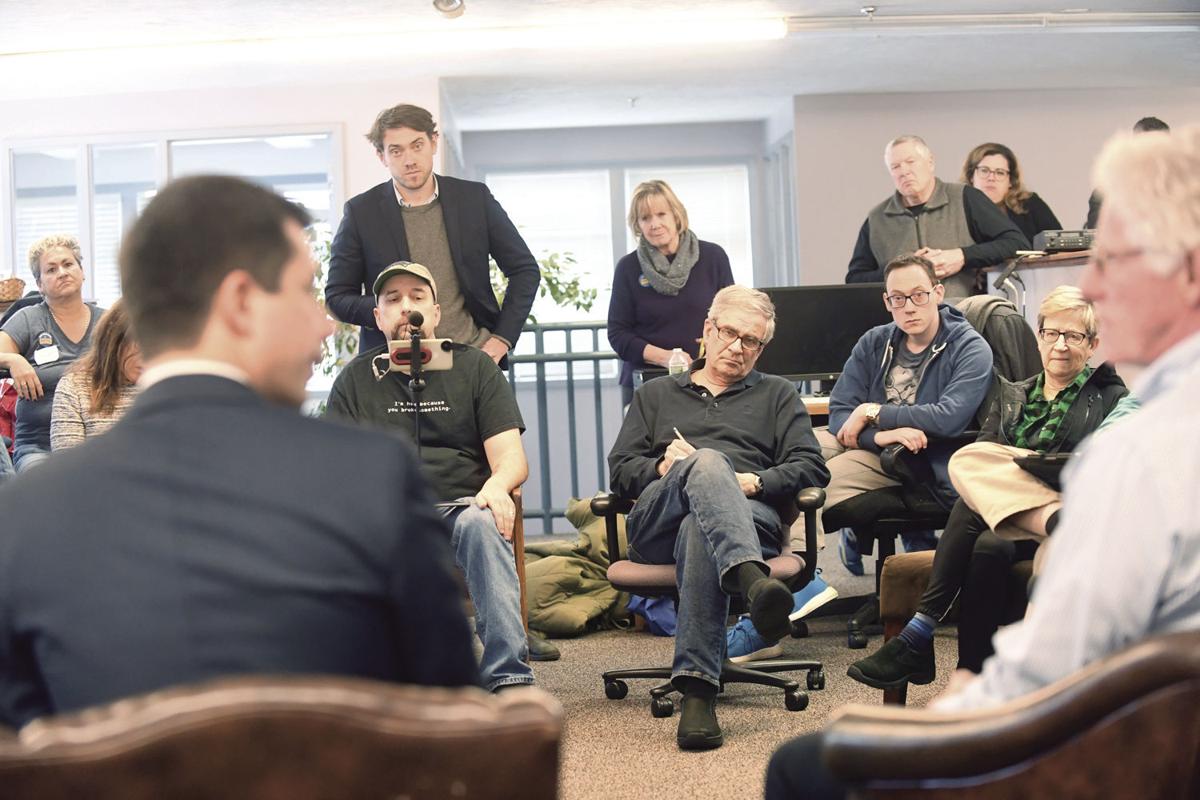 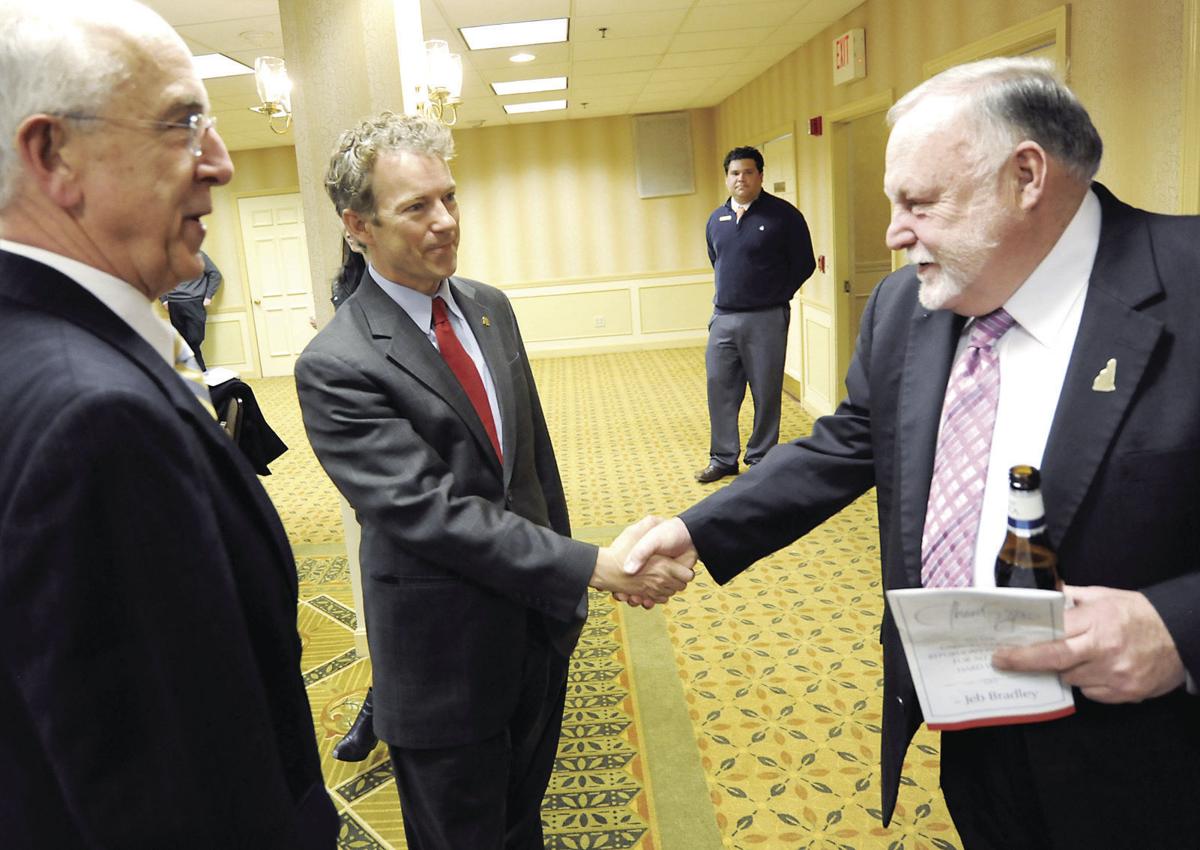 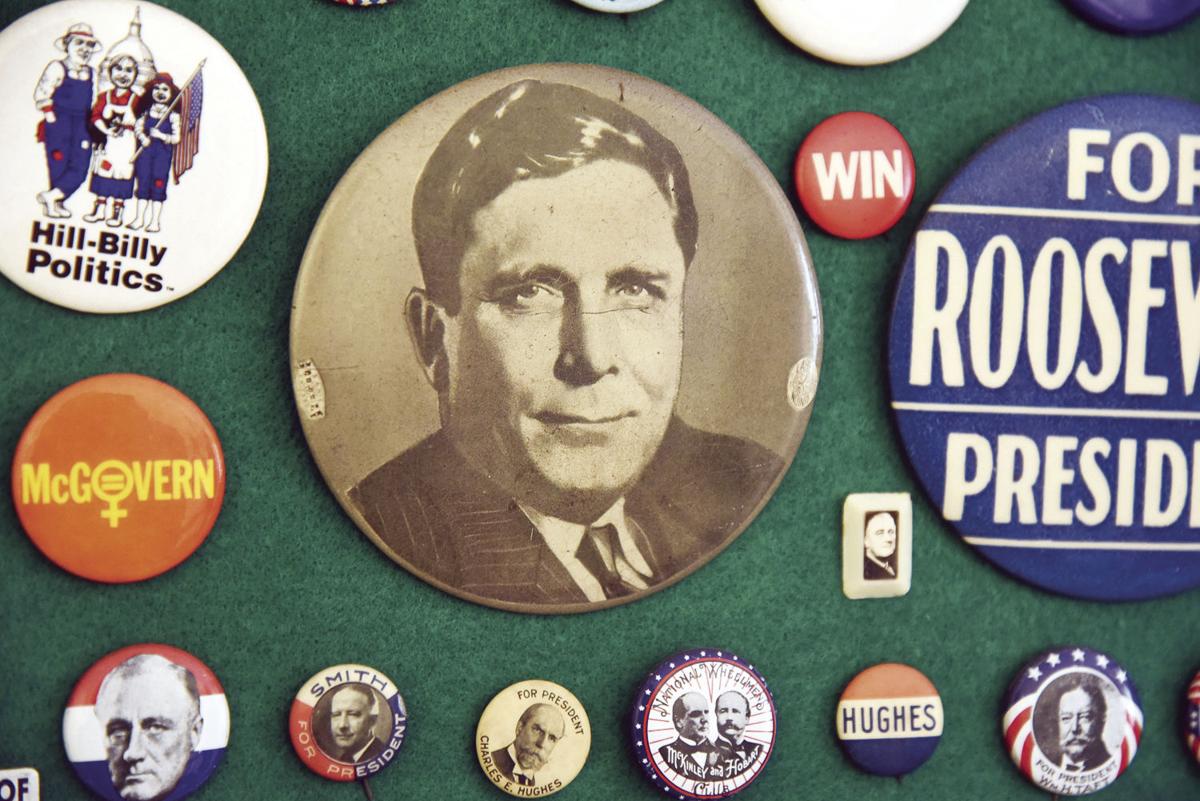 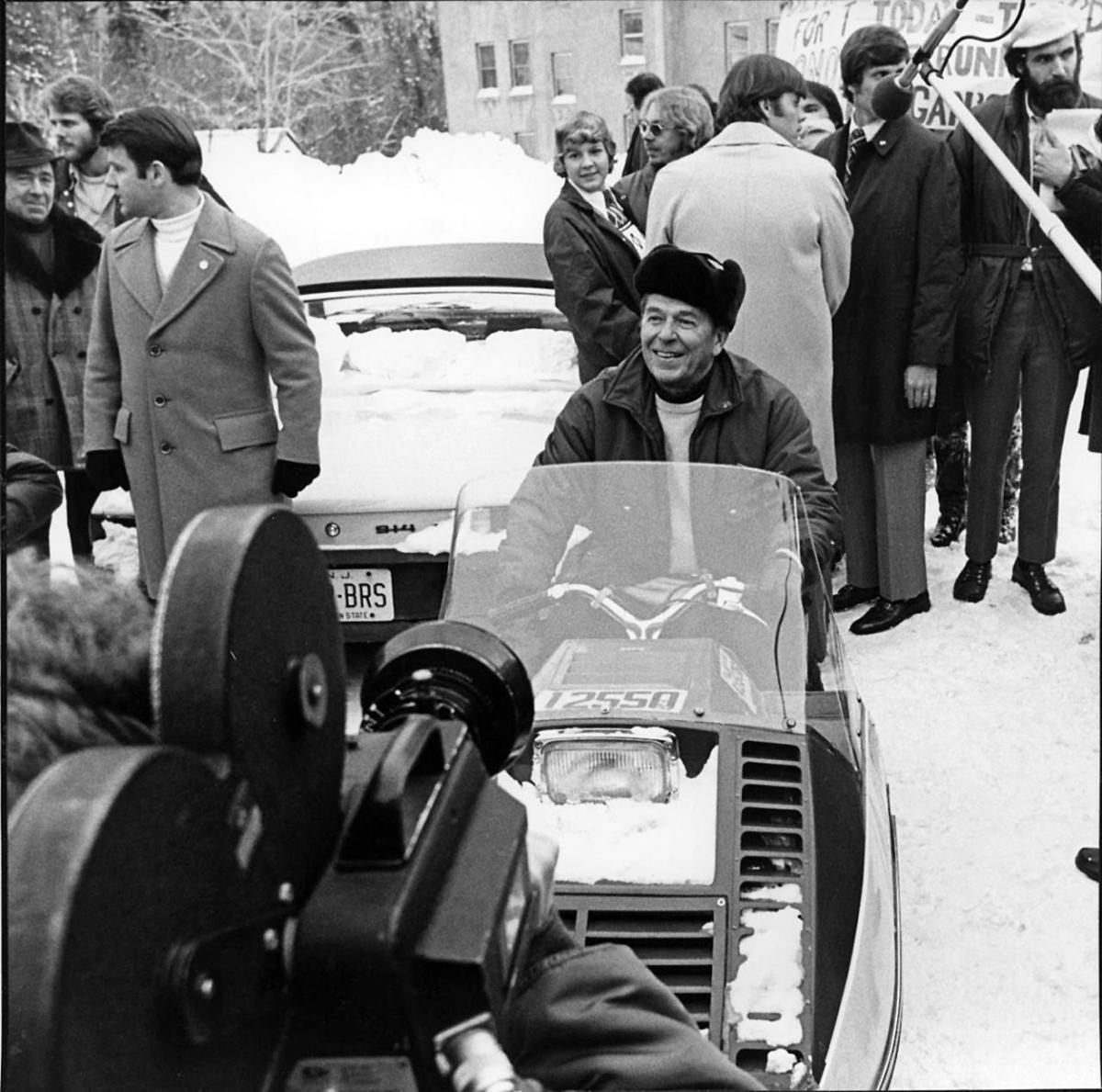 President Ronald Reagan is shown campaigning in New Hampshire on a snowmobile in the 1980s. (COURTESY PHOTO) 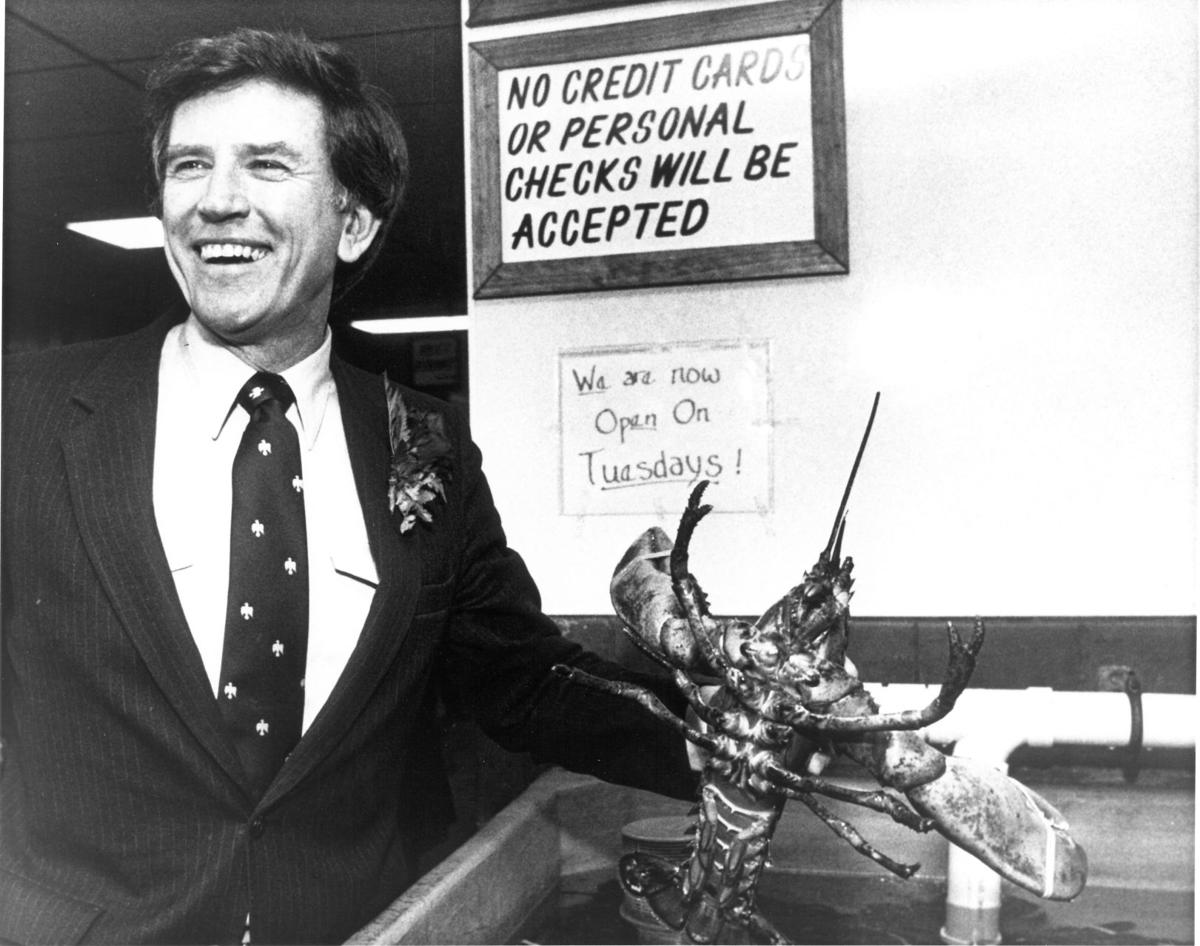 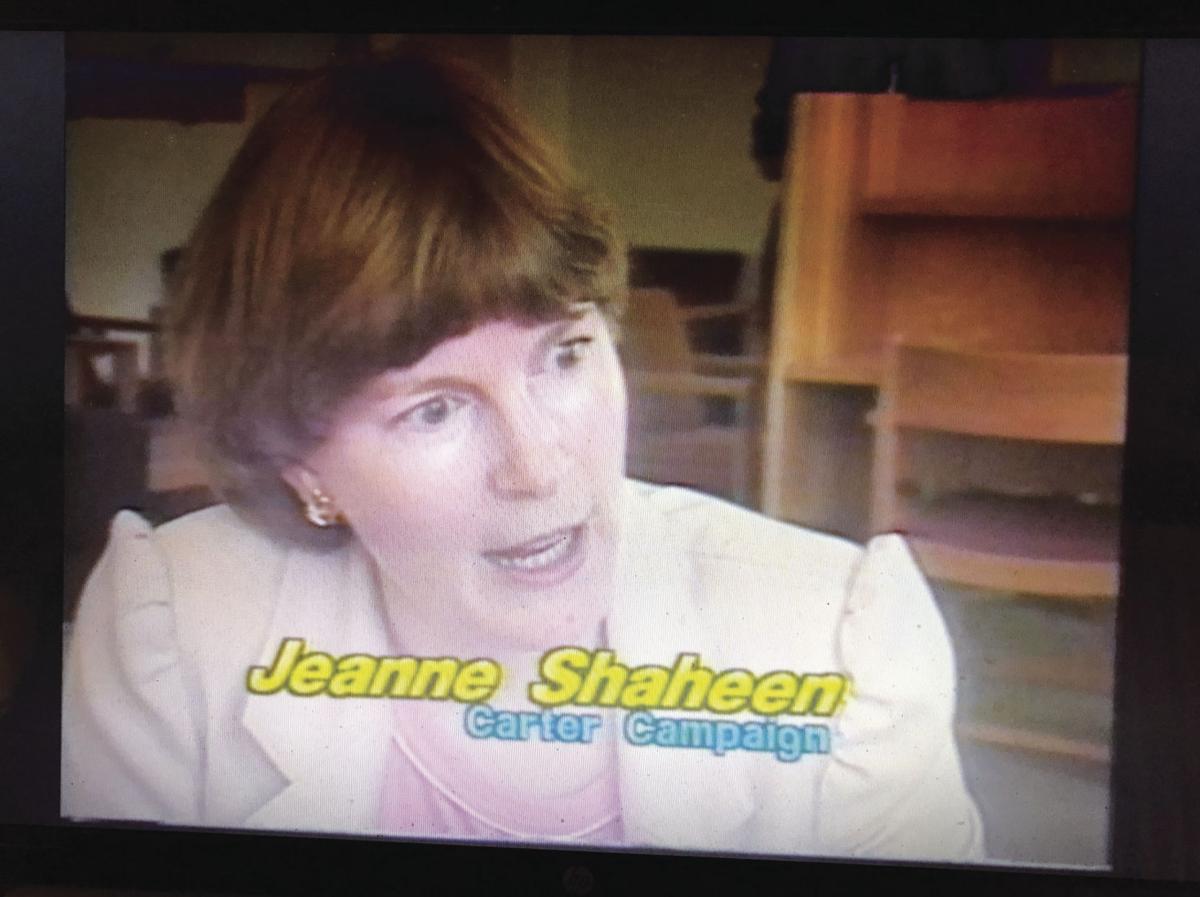 Young Jeanne Shaheen, Jimmy Carter campaign worker, speaks in a documentary videe on the history of the primary. She went on to become a N.H. governor and senator. (MARGARET McKENZIE PHOTO)

Brian P. Wiggin shows a picture of himself with Mitt Romney from the 2007 primary election at his Conway home Tuesday. (JAMIE GEMMITI PHOTO)

President Ronald Reagan is shown campaigning in New Hampshire on a snowmobile in the 1980s. (COURTESY PHOTO)

Young Jeanne Shaheen, Jimmy Carter campaign worker, speaks in a documentary videe on the history of the primary. She went on to become a N.H. governor and senator. (MARGARET McKENZIE PHOTO)

CONWAY — Like the rest of New Hampshire, which enters the national spotlight every four years due to the importance of its first-in-the-nation presidential primary, the Mount Washington Valley has played host to countless hopefuls vying for the White House.

Eventually, one of them actually makes it into the Oval Office, as Secretary of State Bill Gardner reminds us, saying, “Beginning in 1952, every president has won at least one New Hampshire primary.”

One thing Shribman most values about the primary, he said, is “I love the notion that this is not merely retail politics but real politics — person to person, one on one. Presidential candidates have to confront actual voters and address their concerns. I remember thinking during the days of the Soviet Union that if Brezhnev or Andropov or Chernenko were forced to spend the weekend before the primary in New Hampshire the world would change, and for the better.”

Of his favorite campaign trail moments, Shribman shared: “During John Glenn’s campaign running into twins in a Lakes Region town who were born right after his orbital mission. Their names were John and Glenn.”

Other of Shribman’s highlights, each one of which would be a once-in-a-lifetime memory for most of us, were: “Being with Gary Hart when he confronted the adultery question in Hanover. And with Bob Dole when he accused George H.W. Bush of mischaracterizing his record. And with Alexander Haig at The Balsams, the only reporter with him. And with the comedian Pat Paulson when he ran his comic campaign.

“And — can I be remembering this right? — seeing Paul Newman at the old North Conway airport on what is now regarded as the Strip,” Shribman continued. “And confronting Pat Robertson in the basement bar of a Concord hotel — two of us who don’t drink in a bar — about whether he conceived a child out of wedlock.

“And this time around, spending an hour with the Sun staff, talking with Mayor Pete,” Shribman said.

Chandler agreed that the key to campaigning in New Hampshire is the retail politics of candidates getting to hear voters’ concerns and voters getting a first-hand look at the candidates.

“We are a small state. The primary allows a multitude of candidates to get out and actually meet the people instead of just running TV ads or newspaper ads. You’ve got to get out and shake hands. It really is grassroots campaigning,” said Chandler, a political insider who has worked on several Republican presidential campaigns over the years.

“When you win New Hampshire, it means you did the legwork. I always need to impress that message on (candidates and their staff). It’s the key to it.”

Wiggin agreed, and as a former Senate worker as well as veteran history and social studies teacher who several years ago served as co-chair of Conway’s 250th anniversary celebration, he knows and loves political history.

Wiggin keeps a collection of presidential campaign buttons from over the years, along with other presidential memorabilia, including photos of himself with such political friends and past presidential contenders as Sens. Howard Baker and Bob Dole.

He shared a story about how his late mother, June Wiggin, waited on Pat and Richard Nixon at the old Presidential Inn in Conway during the 1968 campaign, and of how his father, the late and colorful Ralph Wiggin, welcomed then candidate Gov. Ronald Reagan to Kennett High in his unsuccessful primary and presidential bid in 1976 before winning in 1980 and 1984.

“There were many protesters outside, who had apparently I am told been bused in, and before he asked a question from the floor, Dad said, ‘Gov. Reagan, I don’t know who the hell invited all those people from Taxachusetts outside, but we here in Conway just love you.’ It brought the place down, and Reagan, of course, had quite a sense of humor, so he liked it.”

Those conversations followed a presentation by the Bartlett Historical Society on Jan. 15 featuring a talk and video on the history of the New Hampshire primary by videographer John Gfroerer at the Josiah Bartlett Elementary School.

The talk was sponsored by the N.H. Humanities Council.

Gfroerer, owner of Accompany, a video production company based at the Capitol Center for the Arts in Concord, was introduced by Bartlett Historical Society president Phil Franklin, who noted that Gfroerer has produced more than 40 documentaries over the years, including, “A History of the New Hampshire Presidential Primary.”

During his presentation, Gfroerer presented a brief history of the primary, from its origins during the Progressive era of the early 20th century, through its evolution to the most important step toward being elected president of the United States.

Based around segments from the documentary, “The Premier Primary, New Hampshire and Presidential Elections,” his program focused on memorable moments such as Democratic Sen. Edmund Muskie of Maine crying in front of the Union Leader office, and discussions about who paid for Ronald Reagan”s microphone at the debate in Nashua during the 1980 Republican primary.

The video offers a comprehensive history of the primary with a focus on each primary for the past 50 years, interviews with the New Hampshire people who ran the campaigns and lots of historic news film.

To order one, go to accompanyvideo.com/store-new-hampshire.

As for us Granite Staters, we are all in the thick of it now once again, as evidenced by the estimated 800 voters who attended the rally with Sen. Bernie Sanders of Vermont at Tuckerman Brewing Co. in Conway on Sunday afternoon.

Or the 500 who caught Indiana Democrat Pete Buttigieg’s talk at the North Conway Community Center Jan. 5; the 100 who caught Democratic entrepreneur Andrew Yang’s address at The Met Coffeehouse in North Conway Jan. 10; or the 200 who attended Sen. Amy Klobuchar’s talk at Kennett Middle School on Dec. 29, to name a few.

There are more to come over the next few weeks, including a visit by Rep. Tulsi Gabbard Jan. 28 (she’ll be snowboarding at Cranmore and holding a town meeting at the mountain at 6 p.m.).

May the best woman or man win!