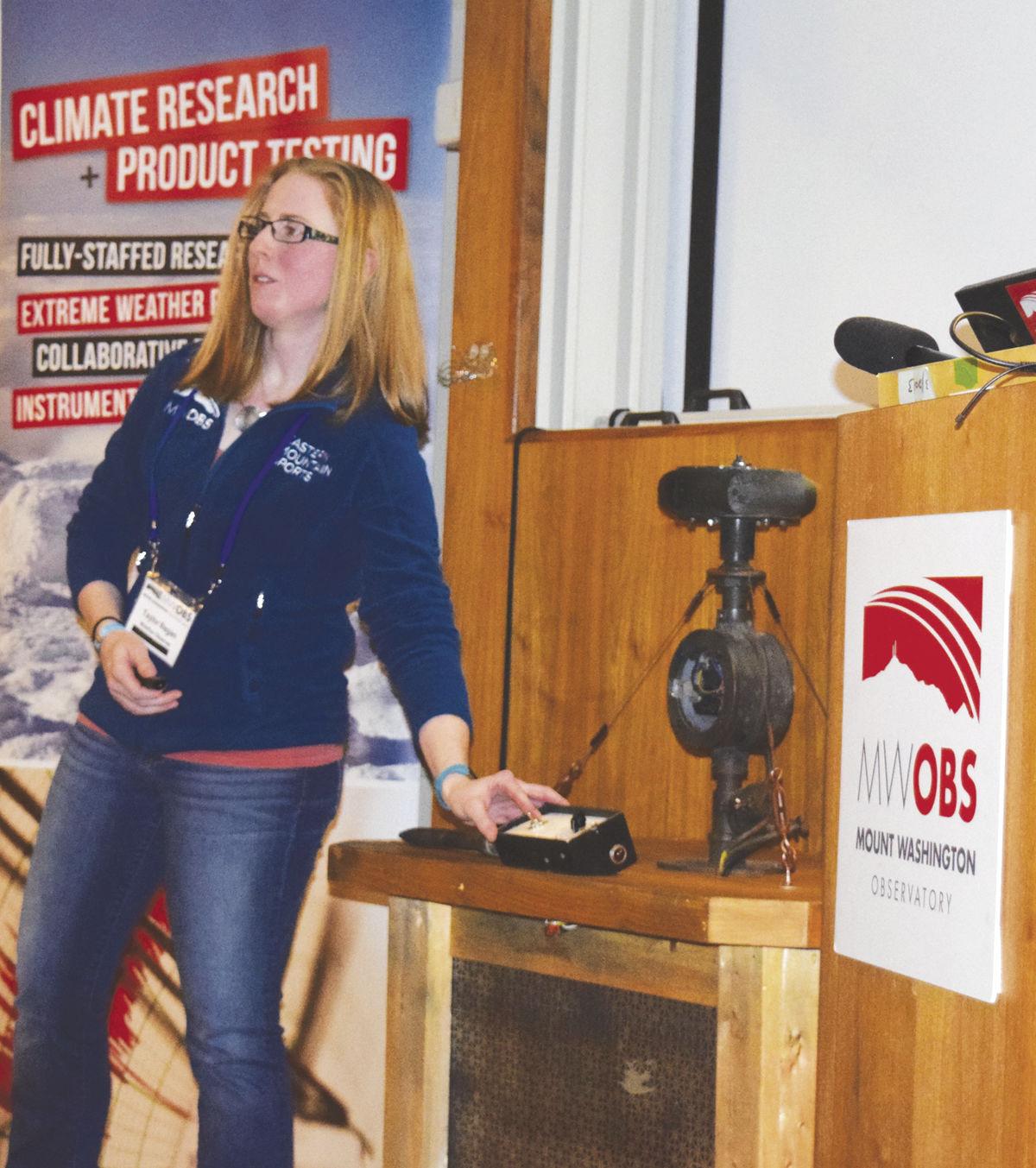 Taylor Regan demonstrates the clicks that the heated no. 2 aneometer, manufactured in by the Mann Instrument Co. of Cambridge, Mass., made when recording the 231 mph record wind. (EDITH TUCKER PHOTO) 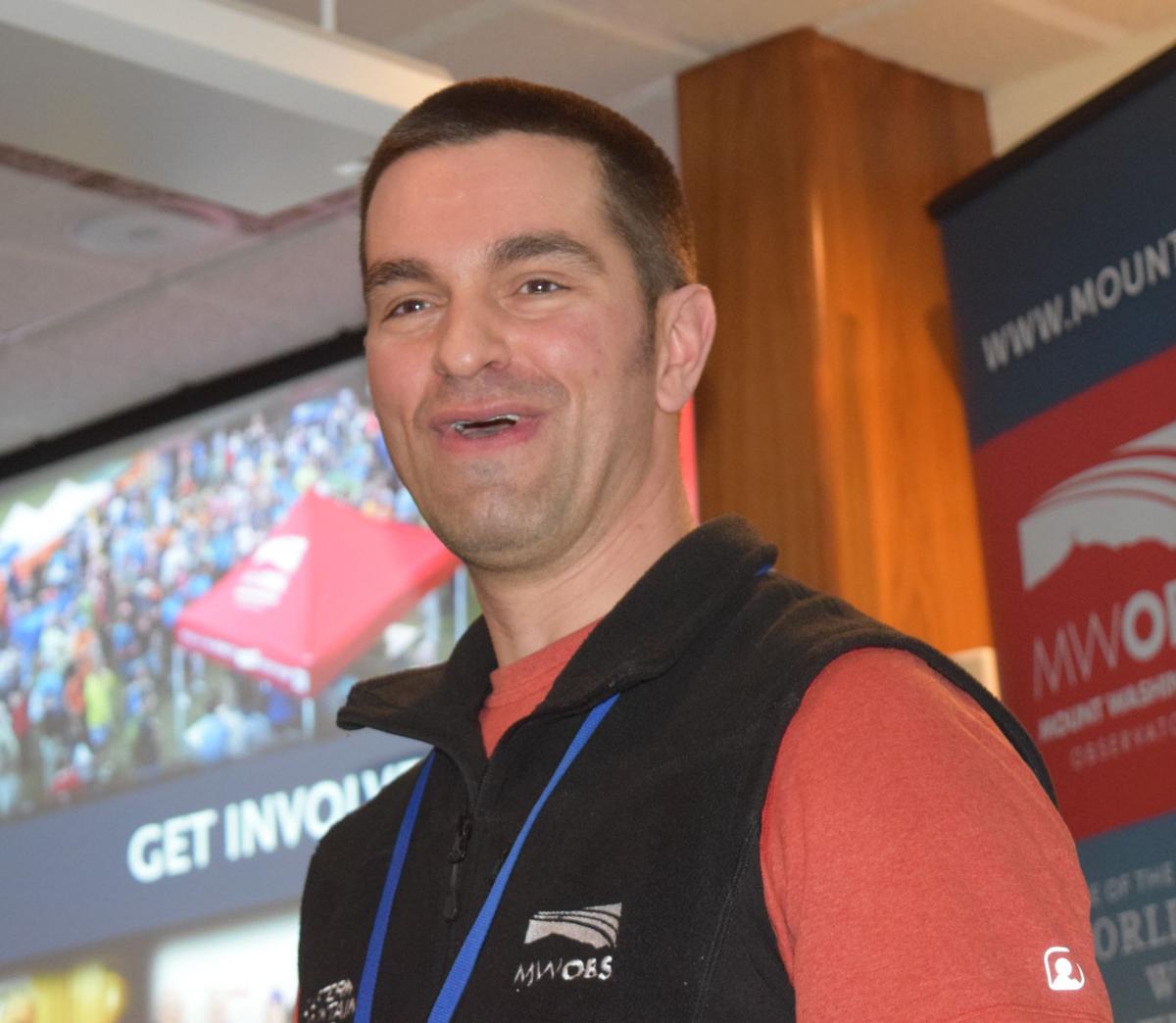 One of the two main speakers who helped celebrate the 85thanniversary of the MWOBS’ 231 mph record Big Wind, Dr. Eric Kelsey holds a joint position as its Director of Research and Research Professor at PSU’s Meteorology program. (Edith Tucker photo)

Taylor Regan demonstrates the clicks that the heated no. 2 aneometer, manufactured in by the Mann Instrument Co. of Cambridge, Mass., made when recording the 231 mph record wind. (EDITH TUCKER PHOTO)

One of the two main speakers who helped celebrate the 85thanniversary of the MWOBS’ 231 mph record Big Wind, Dr. Eric Kelsey holds a joint position as its Director of Research and Research Professor at PSU’s Meteorology program. (Edith Tucker photo)

He admitted during the question-and-answer period that the Obs' record had been broken in 1996 at the uninhabited Barrow Island, Australia, during Typhoon Olivia and that the new record was set at 253 mph on entirely automated equipment.

But Mount Washington’s 231-mph wind is still, the highest ever observed by humans. Two distinct gusts of 231 mph were recorded, Kelsey said.

As the afternoon of April 12, 1934, wore on, frequent values of 220 mph also were recorded, including several gusts to 229 mph, Kelsey said. There were also sustained winds of 188 mph for a five-minute period, and 210 mph for a 17-second period.

By way of comparison, a Category 5 hurricane has wind speeds of 157 mph or more.

Kelsey and Regan described the ways the crew and others worked to verify the record’s accuracy. The anemometer they used to take the measurement was taken to a wind tunnel in Washington, D.C., where Charles Marvin, chief of the U.S. Weather Bureau (now the National Weather Service), performed tests that confirmed its accuracy. Results were compared with tests by the U.S. Bureau of Standards in November 1933 before being installed at the summit. The device may have slowed slightly, making 231 mph slightly conservative.

Regan played a recording of the series of clicks that the anemometer would have made, to be recorded on a paper sheet when the record was set.

The original device is in the Obs’ mountaintop Discovery Museum in the Sherman Adams Building.

But that isn't the only "big wind" that's been recorded at the summit.

This past winter, a new record wind was set for the month of February. On Feb. 25, the Obs crew recorded a wind speed of 171 mph — the eighth-highest wind ever measured on the 6,288-foot summit. A wind speed of 138 mph also was sustained for one hour.

(High winds also were the story on the summit this Monday and Tuesday, with the Obs recording a peak gust of 133 mph Monday and 142 mph, also from the northwest, Tuesday at 6 a.m.)

Kelsey said that in 1870, that a group of scientists decided to observe the mountain’s winter weather, hoping to improve forecasting knowledge. Though few thought they would succeed, the rugged team stuck with it and gathered data that was widely recognized by the scientific community.

Their observations drew the attention of the United States Signal Service — a precursor to the National Weather Service — that maintained a weather station on the summit until 1892.

Forty years later, some gung-ho civilians founded the observatory in order to resume the Signal Service’s work. Using a $400 research grant from the New Hampshire Academy of Sciences and a handful of donors — Bob Monahan, Sal Pagliuca, Alex McKenzie and Joe Dodge of AMC — re-established the mountaintop station on Oct. 15, 1932.

Living at the summit in a one-room structure outfitted with a coal stove was spartan, but the determined crew was steadfast in its mission. They also established the long-held tradition of having cats and kittens on site.

After the 231-mph record wind, the value of a permanent mountaintop station was recognized, and Mount Washington Observatory was established as a private, non-profit organization to observe and maintain a record of weather data, perform weather and climate research, and foster public understanding of the mountain and its environment.

The 85thanniversary was also celebrated with free admission to the Main Street Discovery Museum. Visitors could enjoy some live video connections to the mountaintop where a meteorologist could show them the weather instrumentation wall.

Kelsey also referred to ongoing research that has been started that likely will be useful those living and traveling in the warming North Country valleys, where rivers are becoming prone to flood in middle of winter, sometimes developing ice jams, and in ravines, where hikers and skiers are at risk of avalanches.

“The new sensing stations are equipped with 12 thermistors (resistance-based thermometers), an ultrasonic snow depth sensor and a temperature and relative humidity sensor for the air above the snowpack.”

Data are being logged by new, inexpensive microcontrollers, powered by small lithium batteries and a solar panel.

If testing goes well, the long-term plan will be to outfit stations with communications equipment to automatically send data in real time to researchers as well as to the Mount Washington Avalanche Center and Northeast River Forecast Center.