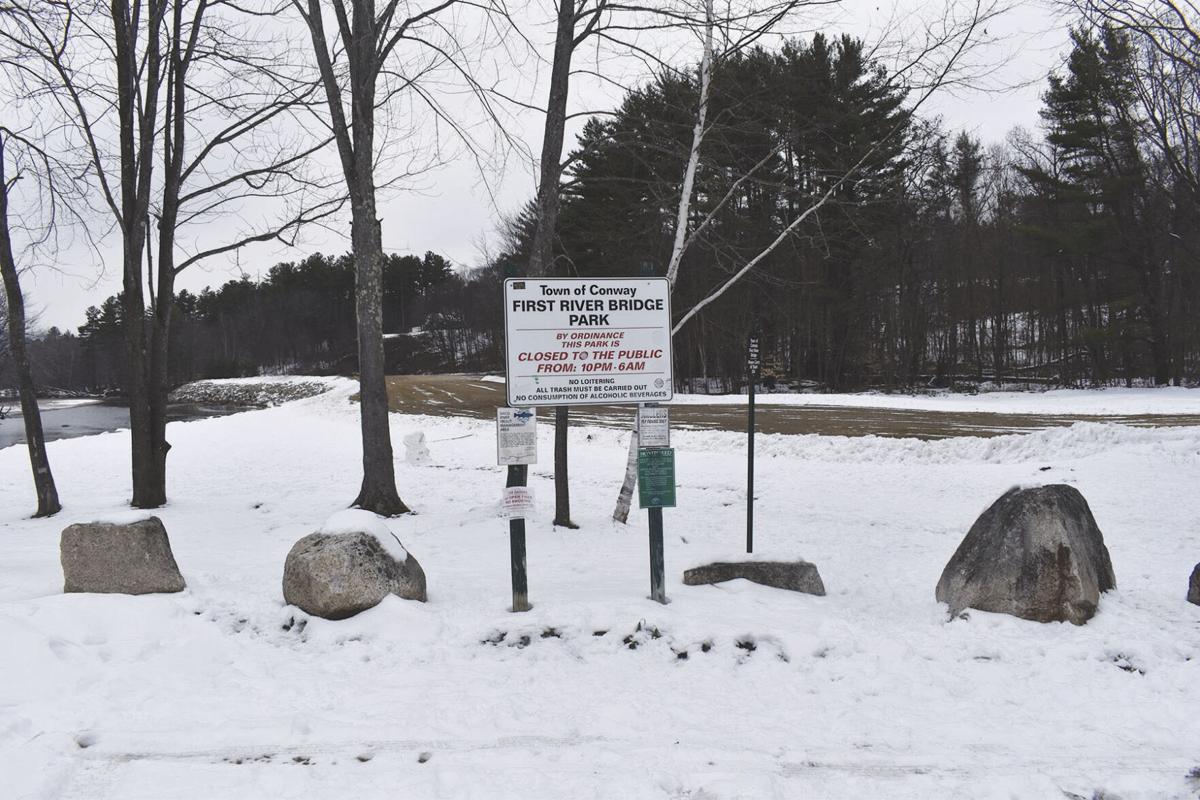 The east side of First Bridge is one of the parking areas that will have paid parking for non-residents after Memorial Day. (DAYMOND STEER PHOTO) 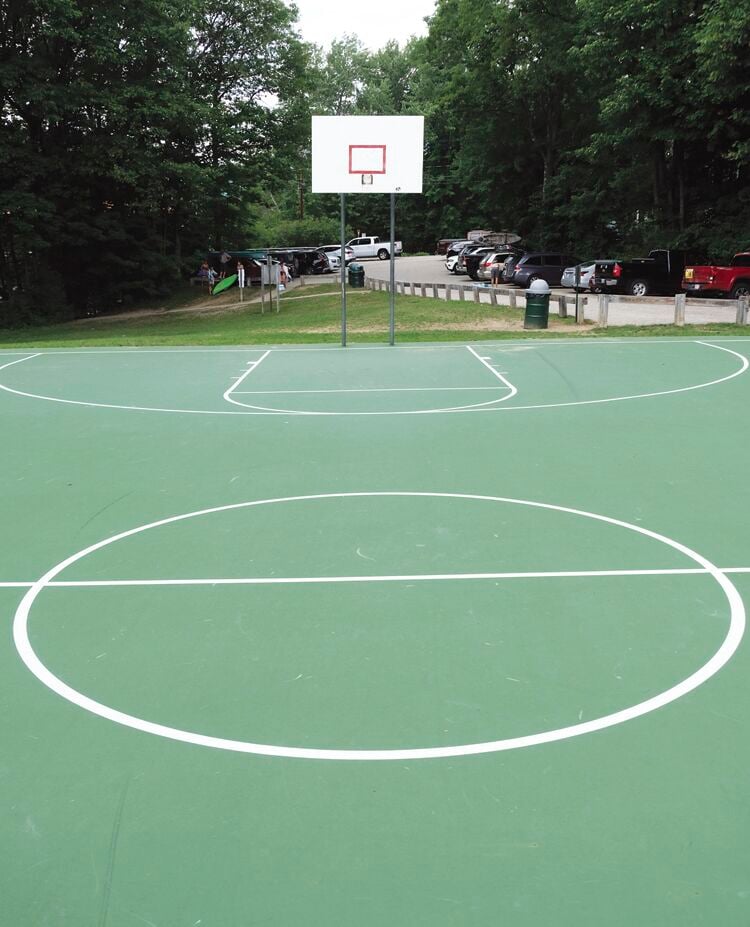 The Davis Park basketball courts and parking lot are seen last July. The Conway recreation site is one of three that will have non-resident parking fees next summer. (JAMIE GEMMITI PHOTO)

The east side of First Bridge is one of the parking areas that will have paid parking for non-residents after Memorial Day. (DAYMOND STEER PHOTO)

The Davis Park basketball courts and parking lot are seen last July. The Conway recreation site is one of three that will have non-resident parking fees next summer. (JAMIE GEMMITI PHOTO)

CONWAY — Selectmen voted Tuesday to have the parking fee at three recreation sites for non-residents be $20 per day.

Last week, selectmen decided town residents, including apartment renters, and second home owners would get vehicle stickers to park for free at Davis Park, on the east side of First Bridge and at Smith-Eastman Landing on Meeting House Road. Selectmen had previously decided to put have paid parking at those three sites either using self-serve kiosks or attendants.

Tuesday’s meeting was conducted by Zoom, as was last week’s. Town Manager Tom Holmes, who has been ill with COVID-19, participated, as did Town Engineer Paul DegliAngeli, who has been serving as acting town manager in Holmes’ absence.

“Staff is recommending that we start this program with a $20-per-day permit fee,” said DegliAngeli.

Smith Eastman-Landing will have a parking kiosk that accepts payment and issues parking passes, as well as an attendant to educate people on the new parking rules. First Bridge and Davis Park will have attendants who will collect money and issue paper parking passes to be placed on vehicle dashboards.

Selectman John Colbath moved to set the non-resident fee at $20, and it passed 5-0.

The board also discussed issues surrounding methods of payment such as how to accept credit card. They directed staff to come up with a plan. “I don’t care how you do it as long as you have the capability of doing it,” said Colbath.

Asked about the safety of having an attendant by his or herself with cash from the car fees, Holmes said the plan is to have staff come by and pick up cash from the attendants multiple times a day.

DegliAngeli reminded selectmen they also had to set a fine for failing to purchase a pass. “We’d like to open the discussion at $200,” said DegliAngeli.

Selectman Carl Thibodeau asked what the town charged for illegal parking on West Side Road near Diana’s Baths. Holmes replied $100.

Selectman Steve Porter made a motion set the parking fine at $100. That passed 5-0.

Revenue from the fees and fines will be put in a fund that will go toward construction costs of permanent public restrooms in North Conway Village.

Selectman Mary Carey Seavey asked what would happen if someone parked at one of the rec sites before the attendant arrives.

Eastman recommended the town charge from 7 a.m.-4 p.m. which is the peak hours of use at Davis Park, which is a popular put-in for tubing and kayaking on the Saco River. There are also municipal tennis and basketball courts there.

“Davis Park is not a very big place,” said Eastman. “If someone is playing basketball or playing tennis, you could just say ‘Hey, you’re going to have to pay the parking fee or leave.’”

Chairman David Weathers asked about fly fishermen who go to First Bridge early in the morning and late afternoon.

Eastman said people may still park off the pavement on River Road.

DegliAngeli suggested the board create signage to prohibit overnight parking at the sites. He said the “latest craze” is people with conversion vans camping overnight at the Marshall Conservation Area, and that should be prevented elsewhere.

Holmes said the fees could be implemented from Memorial Day through Labor or Columbus Days, depending on what selectmen want to do.

Eastman said the rec sites are busy enough that fees could be collected seven days a week after Father’s Day (June 20). He said after Labor Day, it would make sense to collect fees on good-weather weekends.

“We can do whatever the board wants us to do,” said Eastman. “I don’t think you’ll make a lot of money in the middle of the week past Labor Day.”

Selectmen made no official decision for when the fees would be collected.

Meanwhile, selectmen in neighboring Fryeburg, Maine, are anticipating another busy summer season at locations like Weston’s Beach. They say that if Conway charges non-residents to park at their popular recreation spots, they should, too, or face an influx of people who would have otherwise gone to Conway.

“Obviously, if they are going to charge money people are going to flow this way,” said Fryeburg Selectmen’s Chair Tom Klinepeter at a Feb. 11 meeting.

Saco River Recreation Council Executive Director Bob Tagliaferri said that council could manage Weston’s Beach during the summer by collecting parking fees, educating visitors about the river, and having the kayakers and tubers use a takeout above the beach. The council manages parking at Swan’s Falls.

Tagliaferri said if Fryeburg charged $10 per car on busy days and weekends, about $20,000 could be raised and noted that it costs about $16,000 to add a third porta-potty. Money raised above expenses could help fund other site improvements.

“We believe we have the experience, and we think we can control it better,” said Tagliaferri. “In the past, it just hasn’t been controlled at all.”

Fryeburg Selectman Kimberly Clarke said Fryeburg residents and property owners ought to get free parking passes and suggested a charge for Weston’s of around $10.

Fryeburg selectmen said that they would like to double-check Weston’s Beach’s deed to see if they can charge for access. They also want to see if it will take a town meeting vote to implement paid parking there.

A few residents during the Fryeburg meeting said they would like to have the beach be restricted to residents only.

Clarke said students from Fryeburg Academy who are not residents also should be allowed to go to the beach.

Resident Nels Liljedahl, who said he is a professional guide who has paddled rivers all over North America, said the Saco maybe the most overused river in the United States.

“I’m appalled at what I see going on in this river,” said Liljedahl. “I don’t even want to go down in the summer because of the drunkenness, the trash and the rowdiness."