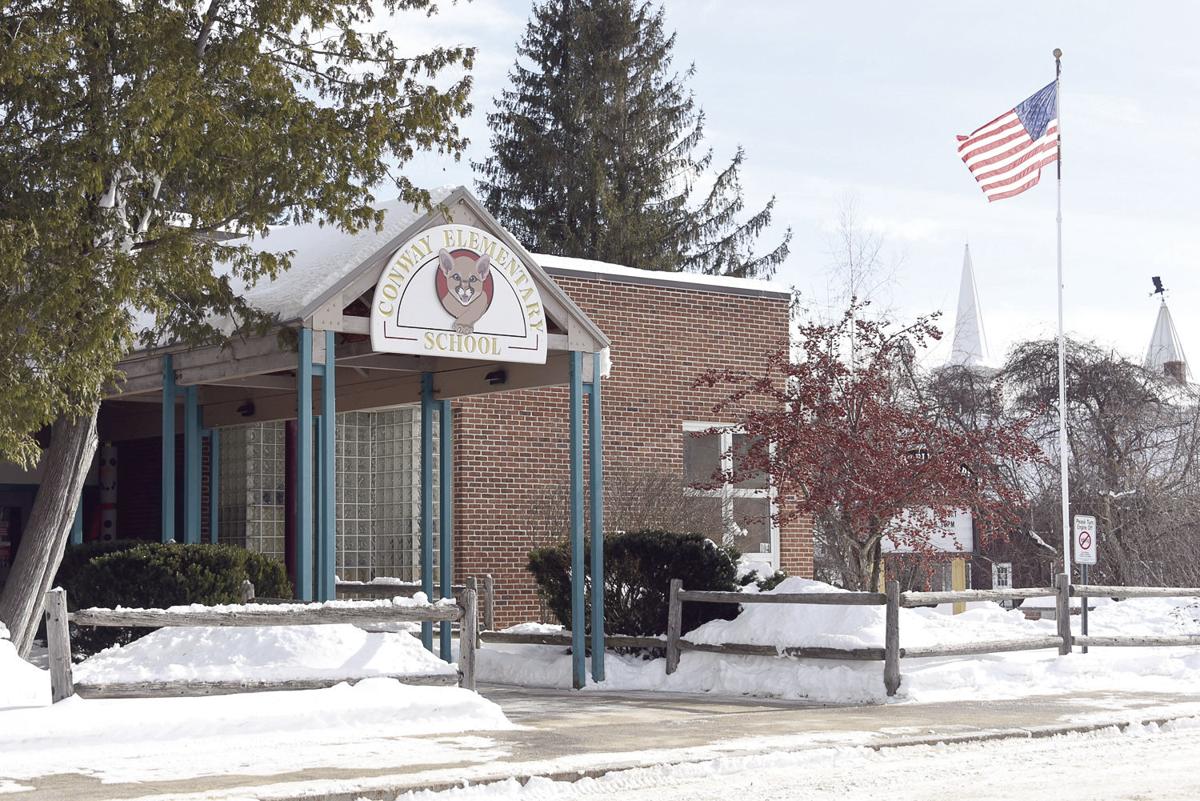 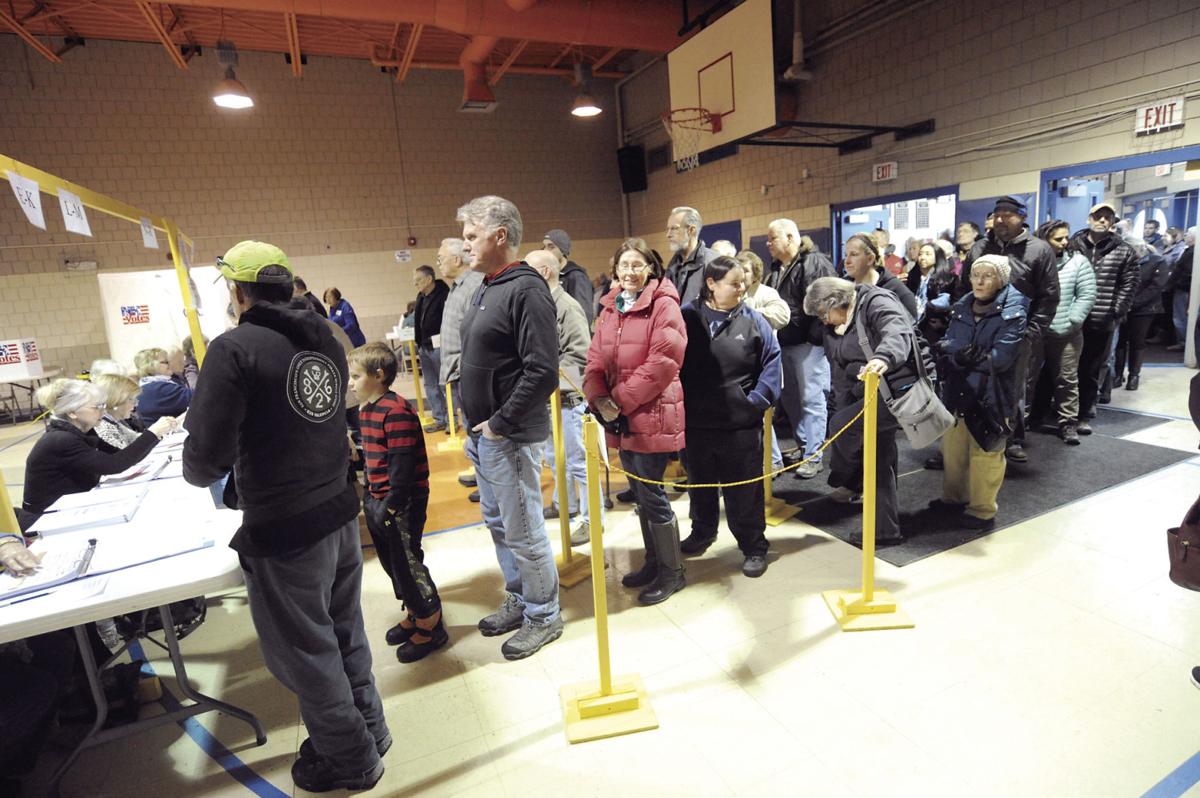 Voters stand in line to cast ballots in the 2016 first-in-the-nation New Hampshire Primary in the Conway Community Building, which formerly housed the Conway Parks and Recreation Department. (JAMIE GEMMITI PHOTO)

Voters stand in line to cast ballots in the 2016 first-in-the-nation New Hampshire Primary in the Conway Community Building, which formerly housed the Conway Parks and Recreation Department. (JAMIE GEMMITI PHOTO)

CONWAY — Voters from Conway and Hale’s Location will be casting their ballots at a new location when the New Hampshire presidential primary is held Feb 11: the gymnasium at Conway Elementary School in Conway Village.

For most of the past 21 years, voting for town and national elections has primarily taken place in the Conway Community Building in Center Conway. With the departure last year of the town recreation department, the building is currently closed.

The calendar for SAU 9 lists Feb. 11 as a teacher workshop, and March 20 is now a student day.

Deborah Fauver, town moderator, sent out a press release this week saying that “the election team believes that Conway Elementary School offers more space for the election, and that the process will go smoothly.”

The first-in-the-nation presidential primary has only one post listed on the ballot: U.S. president.

On the Democratic ballot are 33 candidates, including Marianne Williamson, Cory Booker, Steve Bullock, Julian Castro, Kamala Harris and Joe Sestak, all of whom have suspended their campaigns since signing up for the primary.

Qualifying for ballot access in New Hampshire is a relatively straightforward process. Those wishing to file simply have to submit a declaration of candidacy to the secretary of state’s office, along with a $1,000 filing fee. The filing deadline was Oct. 28.

With an expected large turnout for the primary, town and school officials had originally planned for voting to take place in the Peter Ames Gymnasium at Kennett High School.

But with snow on the ground, and the gym floor being wooden, officials rethought that location.

“With a wooden floor, I get it,” Conway Parks and Recreation Department Director John Eastman said Tuesday. “I wouldn’t want it in here (in the newly renovated Marshall Gymnasium, now part of the Rec Department’s new home at Kennett Middle School). I think that’s a legitimate concern since the high school doesn’t have a floor cover.”

Eastman said a gym floor cover costs about $9,000, something for which the Friends of Conway are raising funds.

Under SB 2 voting procedures, which went into effect in Conway in 1998, town meeting deliberations are followed a month later by ballot voting. At that time, voting moved from the Seidenstuecker Gymnasium at what was Kennett High and is now Kennett Middle School in Conway Village to the Conway Community Building in Center Conway.

The current high school was the polling place for the 2012 and 2016 presidential elections.

The gym at Conway Elementary, which was built in 1957, is made of composition vinyl tile, which does not need to be covered for voting to occur.

“This time of year, with all of the sand and salt on the roads and walkways, you hate to have thousands of people walking across the wooden floor,” Richard said.

He added: “I think Conway El will work well. It has good accessibility with each drop-off and pick-up, and there should be plenty of parking.”

Fauver is expecting 4,000 to vote on Feb. 11, when the polls are open from 8 a.m.-7 p.m. Polling place information is posted at the Conway Town Hall in Center Conway and on the town website at conwaynh.org.

In the 2016 presidential primary, over 3,400 ballots were cast in Conway. Then-Conway Town Clerk Rhoda Quint said her office received more than 300 absentee ballots. There were roughly 6,000 voters on the town’s checklist that February.

Vermont Sen. Bernie Sanders for the Democrats and Donald Trump for the Republicans were the big winners in Conway and statewide that year.

In Conway, Sanders nearly doubled the tally of former Secretary of State Hillary Clinton, 1,175 to 609.

For the GOP, Trump cruised to a comfortable victory.

Fauver said new voter registration will be in the school cafeteria, opposite the gymnasium.

“Turnout is expected to be heavy and several long-term poll workers have retired, so please consider joining our election team,” Fauver stated in her press release.

“Some poll workers choose to work the entire day, some choose shorter shifts. Contact Town Clerk Louise Inkell (603-447-3811) if you can commit to a shift of any length on Feb. 11. Training will be provided as necessary.”

Fauver said new voters can register to vote at Conway Town Hall until Jan. 31, or on Feb. 1 at the checklist supervisors meeting at the Town Hall from noon- 12:30 p.m. or at the polls on primary day. To register, you must be age 18 or older and have with you proof of identity, age, citizenship (driver’s license, passport or similar with a photo ID) and proof of domicile (tax bill, utility bill or similar).

“Voters who do not have all this information are still able to register by affidavit,” Fauver said. “Bring the documents that you have, and the clerk or supervisors will assist you.”

She said New Hampshire law allows undeclared voters to choose either a Democratic or Republican Party primary ballot. “After voting in a party primary, an undeclared voter has the option of a) remaining registered in that party, or b) returning to undeclared status when exiting the polls on election day. If you would like to remain undeclared, please be sure to stop at the ‘Return to Undeclared’ table as you leave and state your intention.”

She added: “Voters registered in either the Republican or Democratic Party must take that party ballot but may choose to write in any person — Republican, Democrat or other — on the ballot.”

Anyone unable to get to Conway Elementary on Feb. 11 still may cast a ballot between now and Feb. 10. You can request an absentee ballot from the town clerk, in person, or by fax or email no later than 5 p.m. on Monday, Feb. 10. Absentee ballot request forms are available at conwaynh.org.