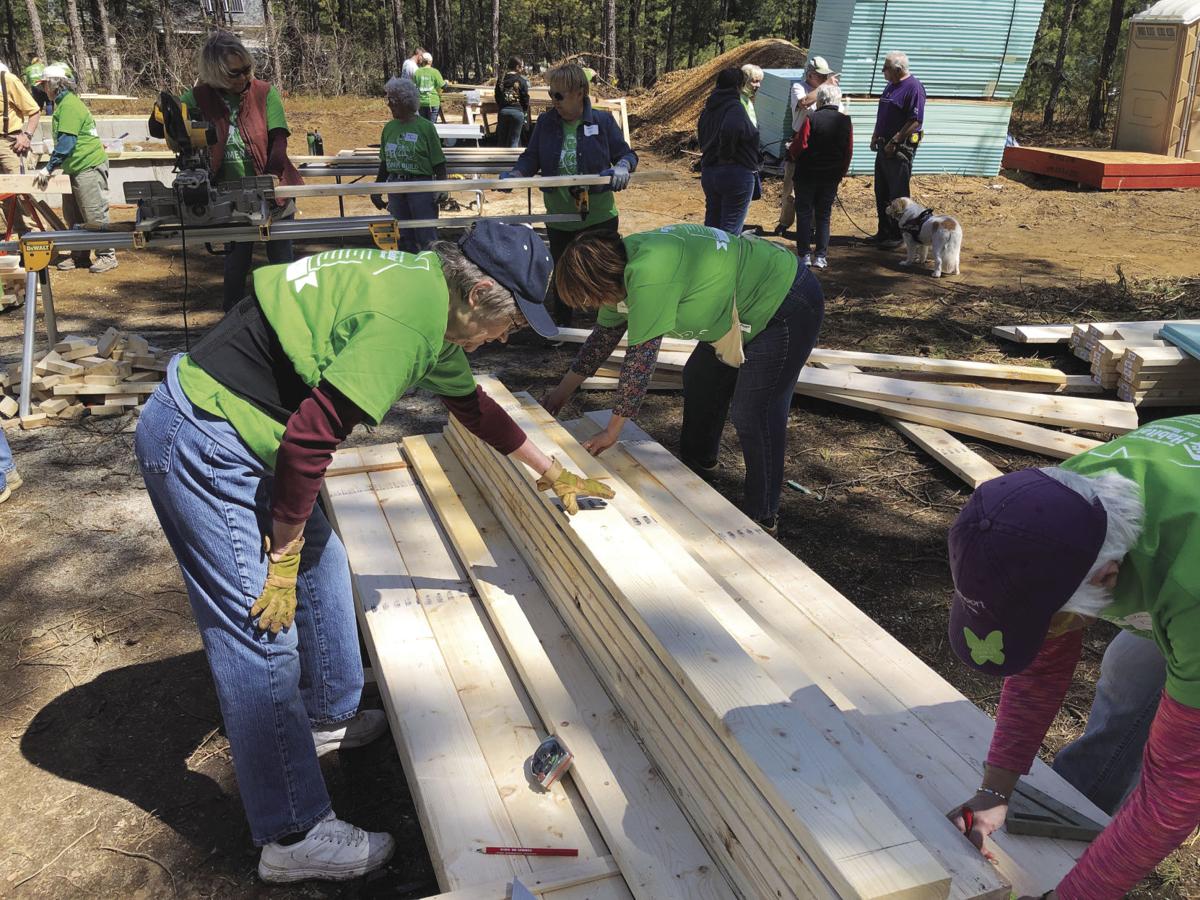 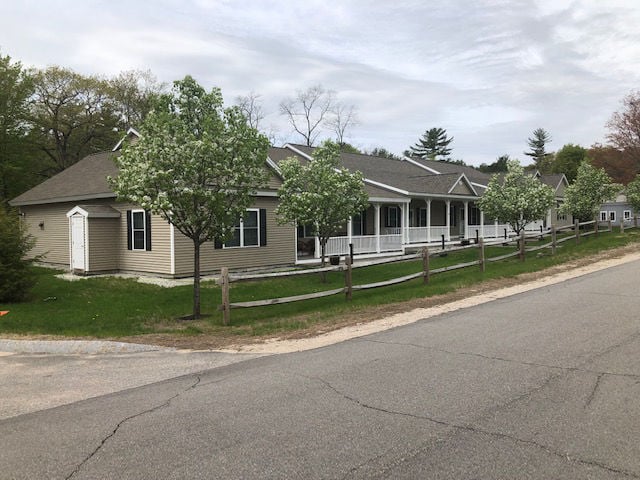 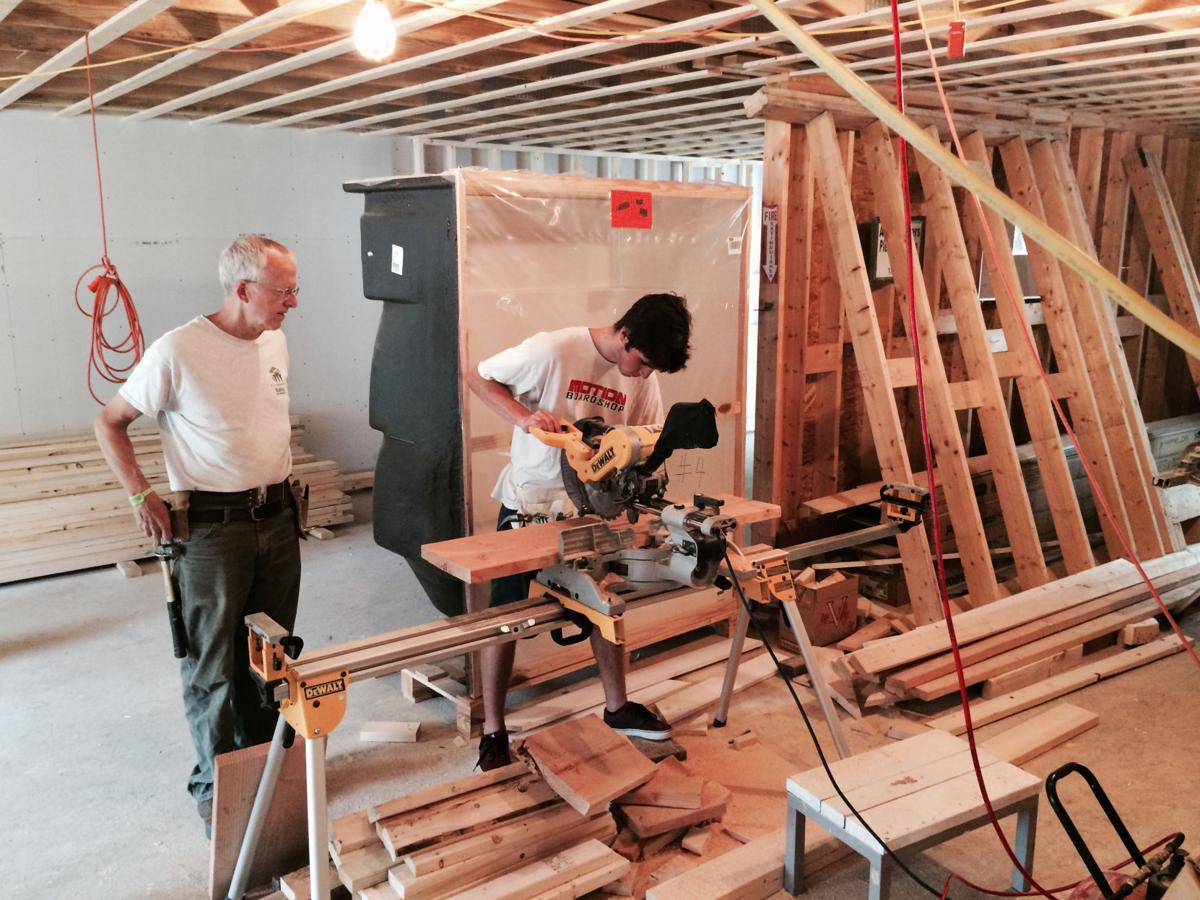 An adult volunteer supervises and guides a teen volunteer in converting a North Road condo into three bedrooms. (COURTESY PHOTO)

An adult volunteer supervises and guides a teen volunteer in converting a North Road condo into three bedrooms. (COURTESY PHOTO)

CONWAY — As guests gather at the new Living Shores Aquarium tonight for the sold-out semi-formal "Blue Tie, Sea Your Way Home" 25th anniversary fundraiser for the Mount Washington Valley chapter of Habitat for Humanity, it's a good time to reflect on the goals and accomplishments of the non-profit organization over the past quarter century.

It all began at the Conway Village Congregational Church on Jan. 18, 1993, when a group of 13 volunteers chaired by Al Risch (1933-2018) of Madison met with Brenda Mleziva, associate director for Habitat for Humanity in the Northeast.

The purpose of the meeting was to learn how to set up a Habitat affiliate. “You have a real Habitat tradition in New Hampshire, and I’m excited to see it’s coming to this part of the state” stated Mleziva.

Risch saw Habitat as a solution to helping a close acquaintance he knew through the handicap ski program.

Jeff White had a degenerative muscular disease and his family, with several young sons, was living in a substandard trailer. Risch knew of a house in Bartlett that could be purchased and refurbished. But first things first — committees had to be formed, articles and bylaws written, volunteers recruited, and most important, money raised.

Alison Risch, Al’s widow, is the first to tell you that Al was too busy “for that administrative stuff,” and so it was that he talked Ted Pettingell, a close acquaintance, to head the organization as president.

Both money and volunteers were difficult to come by. When interviewed by Terry Leavitt, then of the Carroll County Independent, and now of The Conway Daily Sun, Risch was asked what sort of volunteers he was looking for. He responded, “Schoolteachers, lawyers, business people, social workers, all kinds of people with different experiences; people who are willing to work for the benefit of humanity.”

Money was no easier to come by. As Brenda Mleziva told the aforementioned assembled at the Conway Village Congregational Church, “I don’t know of any Habitat for Humanity affiliate that has ever started a house with all the money needed in the bank. That’s part of the reason I think we need to be a faith based organization!”

One fundraiser Risch organized was "The Race to Raise the Roof" snowshoe obstacle race at Cranmore. Contributions were solicited from friends and acquaintances in the valley, and grant requests were made to the Ham Foundation, NH Charitable Fund and Pequawket Foundation.

In 1994, the local group received its charter as the MWV Habitat for Humanity affiliate, the same year that the Bartlett house was totally refurbished through the efforts of numerous volunteers.

They were stored in several donated spaces around the valley, including one of the Hussey family barns on West Side Road.

Ted was constantly on the go, “spreading the word” around the valley to anyone who would listen. He and his wife, Phyllis, took vacation time to travel to Habitat for Humanity Headquarters in Atlanta to attend conferences and workshops.

Upon completion of the two houses on Quint Street, Habitat started looking around for additional land.

Through the efforts of Bob Morrell, he found a 10-acre tract of land on Route 112 that would be large enough for 11 Habitat homes.

Morrell negotiated the price of the land down to $25,000. However, the affiliate lacked sufficient resources to cover this capital expenditure. Morrell was successful in obtaining a $25,000 grant to cover the cost. But the problem with the grant was the money was not available for six months, which meant Habitat might lose this tract of land.

Morrell came to the rescue again and convinced a Conway bank to give Habitat a $25,000 loan for six months, interest-free.

The problems didn’t end here. Land had to be cleared, a road constructed and utilities put in. Initial estimates exceeded $200,000. A local logger agreed to clear the land and gave Habitat back $10,000 for a share of the timber value. At Ted’s request, Gene Chandler, speaker of the New Hampshire House, was instrumental in helping navigate through some red tape issues being experienced with the state relative to utilities and Route 112.

The first house on Morrell Drive was completed in 2001 with a goal set to complete a house a year. This goal was accomplished in 2011. When the last dedication ceremony was conducted in December, 11 houses had been constructed.

In 2003, Ted stepped down from the board. His service to Habitat and the community was recognized by Gov. Craig Benson in a ceremony held in Concord. There is a stone and plaque dedicated to Pettengill in the Morrell Drive complex.

In 2012, the next house to be built was on Menotomy Road in Fryeburg. The lot was purchased the previous year with a grant from the Ham Foundation and was the first building project in Maine by MWV Habitat.

The affiliate welcomed the opportunity to work with Fryeburg officials, subcontractors and various vendors.

It was in October of 2012 that MWV Habitat was able to acquire a six-unit partially finished one-story condo unit on North Road in Conway Village. The sale was effected with the Alice Allen Realty Trust that had obtained the unit through a foreclosure.

A generous grant from the Ham Foundation allowed the 6,000-square-foot structure to be retrofitted to four three-bedroom units. With zoning board approval, internal construction was started in March 2013.

Once these units were completed in 2015, MWV turned its attention to one of two lots previously acquired in Eidelweiss Village, Madison.

The Grisson Road lot was pretty uneven and resulted in a split-level floor plan versus the customary slab design.

This house was completed with a mortgage closing in March 2016. That coincided with the clearing of the first of three lots in the Sokokis Pines development, Tamworth.

This build represented a drastic departure from previous builds as it featured solar panels and radiant floor heating. There was considerable debate by the board as to the feasibility and cost of this venture. Cost of the panels and radiant floor heating equipment were offset by a $16,000 grant from the McIninch Foundation. Installation labor costs were donated. Electric bill to the family in February, first month was $11.25!

The second house in Sokokis Pines followed a year later, also with solar and radiant floor heating. Once again, a grant from the McIninch Foundation offset the cost of material, and labor was donated.

Habitat had to do something with the lot on Burgdorf Road in Eidelweiss and opted to make that the next build. This turned out to be a difficult build as higher unanticipated costs were incurred with water hook-up. But the house was completed in time for the family to enjoy their first Christmas in their own home.

During this time frame, Habitat acquired a third lot in Sokokis Pines, and that is where the current build is occurring. It, too, includes solar and radiant floor heating.

The three founders would be very proud of MWVHFH’s accomplishments over the years.

This affiliate has been one of only two in the state to be chosen to conduct Women Build. Since 2007, women volunteers on Mother’s Day weekend have constructed and erected the exterior walls of 12 houses.

The affiliate also has led the way in the state with the installation of solar and radiant floor heating.

Twenty-two homes have been built, ensuring 62 children could be raised in safe, secure and stable environments.

MWV Habitat’s cost has been $2.5 million dollars; the market value of the houses exceeds $3.1 million. But true success is best measured in how it has made a difference in family lives.

As one homeowner put it, "My family and I are tremendously lucky to have had you build our home. You will always be held in the highest regard by us. Because of all of you, my family can stop just surviving and now begin living."

Tonight's fundraiser at the new Living Shores Aquarium will pay tribute to the visionaries, Risch, Pettengill and Morrell, as well as all who have worked to make the local chapter such a success. Alison Risch, Al’s widow and Kathy Somerville, Ted’s stepdaughter, will be honored attendees.

Thanks to all's efforts, the chapter is "swimming along" just fine, making a difference in the lives of local residents.