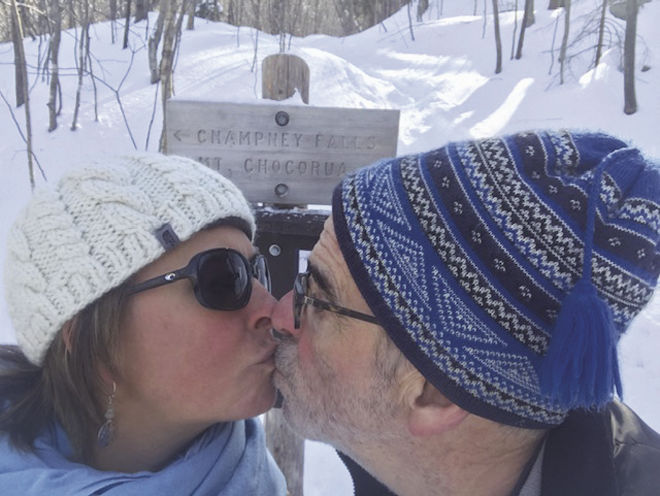 Jen Kovach and Kevin Flynn, owners/operators of the Snowvillage Inn, share a romantic moment during a snowshoe outing to the White Mountain National Forest. “You never get tired of the wonders of where we get to live,” Jen believes. (COURTESY PHOTO) 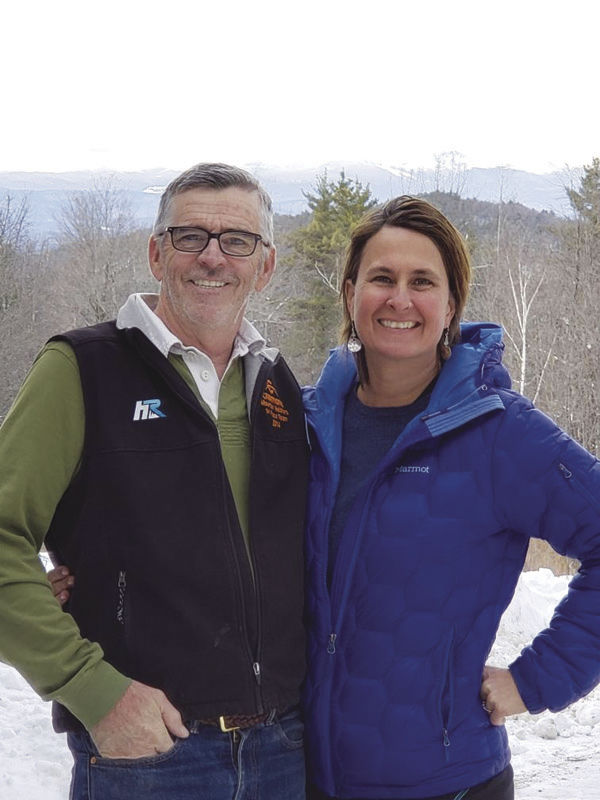 Jen Kovach and Kevin Flynn, owners/operators of the Snowvillage Inn, share a romantic moment during a snowshoe outing to the White Mountain National Forest. “You never get tired of the wonders of where we get to live,” Jen believes. (COURTESY PHOTO)

Editor’s note: As part of its “Love in the Sun” series, the Sun is profiling local couples, Feb. 8 through 14, to celebrate Valentine’s Day.

EATON — There is always something fun going on at their Snowvillage Inn, which reflects innkeepers Jen Kovach and Kevin Flynn’s approach to celebrating a socially conscious community life.

This fun couple has owned and operated the country inn together for the past eight years.

(It’s actually Kevin’s second go-round running the inn — he and his first wife sold it 15 years ago, but when it became available again, he and Jen purchased it back after intervening owners put it on the market.)

Engaged to be married, the couple is involved in the community on many levels, including serving as founding directors of the Eaton Village Preservation Society, the non-profit organization they helped to establish when it looked like the Eaton Village Store was going to go out of business 16 years ago.

The idea behind the creation of the non-profit was that were a non-profit to own the store, which houses a breakfast and lunch eatery, small grocery store and also Eaton’s post office, then that would eliminate the need for would-be operators to have to come up with the capital to purchase the store, allowing them to focus on running it and making their living that way on a five-year lease.

It showed how socially conscious the couple is and their love of community.

Jen and Kevin bring that flair to all of their endeavors, and that is reflected in the social happenings at the inn, which is a romantic and scenic getaway built as a private summer cottage in 1902 that offers views to the north of Mount Washington and the entire Presidential Range and is home to Max’s Restaurant.

Bimonthly art shows, seasonal craft fairs and themed dinners and weekends are all part of the offerings in Eaton, along with weddings and get-togethers.

They also host dine-to-donate events on the third Wednesday of every month, with 15 percent of the night’s proceeds going to a chosen non-profit, and raffles are held as well.

(This month’s, on Feb. 19, will benefit the Eaton Village Preservation Society, and on March 18, it will help Assisted Canine Training Services.)

The locals nights have evolved into a night where valley residents can gather and enjoy camaraderie and comfort food at affordable prices.

“Anyone who shows up at the door for our Locals’ Night is considered a local, no matter where they reside,” quipped Kevin.

The inn is so popular, especially among couples, that they note that their Valentine’s special menu for Feb. 14 is sold out, and so is the inn — however, Kevin and Jen say that there is availability for tonight as well as Saturday and Sunday (normal hours are Wednesday-Saturday for Max’s, but for this Valentine’s week, they are open Sunday as well).

Upcoming events include Parrothead Weekend, a Jimmy Buffett-themed festival weekend, March 20 and 21, which will feature a Caribbean-themed menu and Eric Rollnick and the Mango Groove Steel Drum Band. The weekend is open to inn guests and the public alike.

In addition to the inn, Jen is the proprietor of Garden Dreams, which is a goat milk soap and beauty products company she has run for the past 20 years.

Asked what makes their relationship work, Kevin and Jen said they enjoy one another’s company and the joy of living in Mount Washington Valley.

“I think we got to know each other when we were both founding members of the Eaton Village Preservation Society and became close friends,” said Kevin.

“After Jen’s divorce, we started to date, fell in love and moved in together. When the inn became available, I told her all the things that were going to happen and all that it involved, and asked her if she wanted to go with it, and she did — and it has been a great experience.

“We work really closely together — I do financing and maintenance and bartending and breakfast cooking; and Jen does all of the marketing, scheduling and runs the restaurant,” Kevin said.

Freshly back from a sunny day of skiing with friends at Cranmore, Jen joked that “owning an inn makes it possible to work any 16 hours a day that I want!”

Asked about her relationship with Kevin, she said: “For us, the magic is not only do we support one another, but we challenge one another. For example, the other day, it was such a nice day, I insisted that we get out and go snowshoeing, because when you’re running an inn, there’s always some trappings that you have to do, and it’s great to get out and clear your head.

“We went to Sabbaday Falls, and I turned to Kevin said, ‘Isn’t it amazing that it takes us 15 minutes from home to get to such an incredible place in the White Mountain National Forest?’ You never get tired of the wonders of where we get to live. It’s a lifestyle that we choose, with long hours but great rewards.”

To join Kevin and Jen in celebrating life in the valley, take a drive to Eaton, the picturesque little town on Crystal Lake, home to the Eaton Village Store, Little White Church, Inn at Crystal Lake — and the Snowvillage Inn.