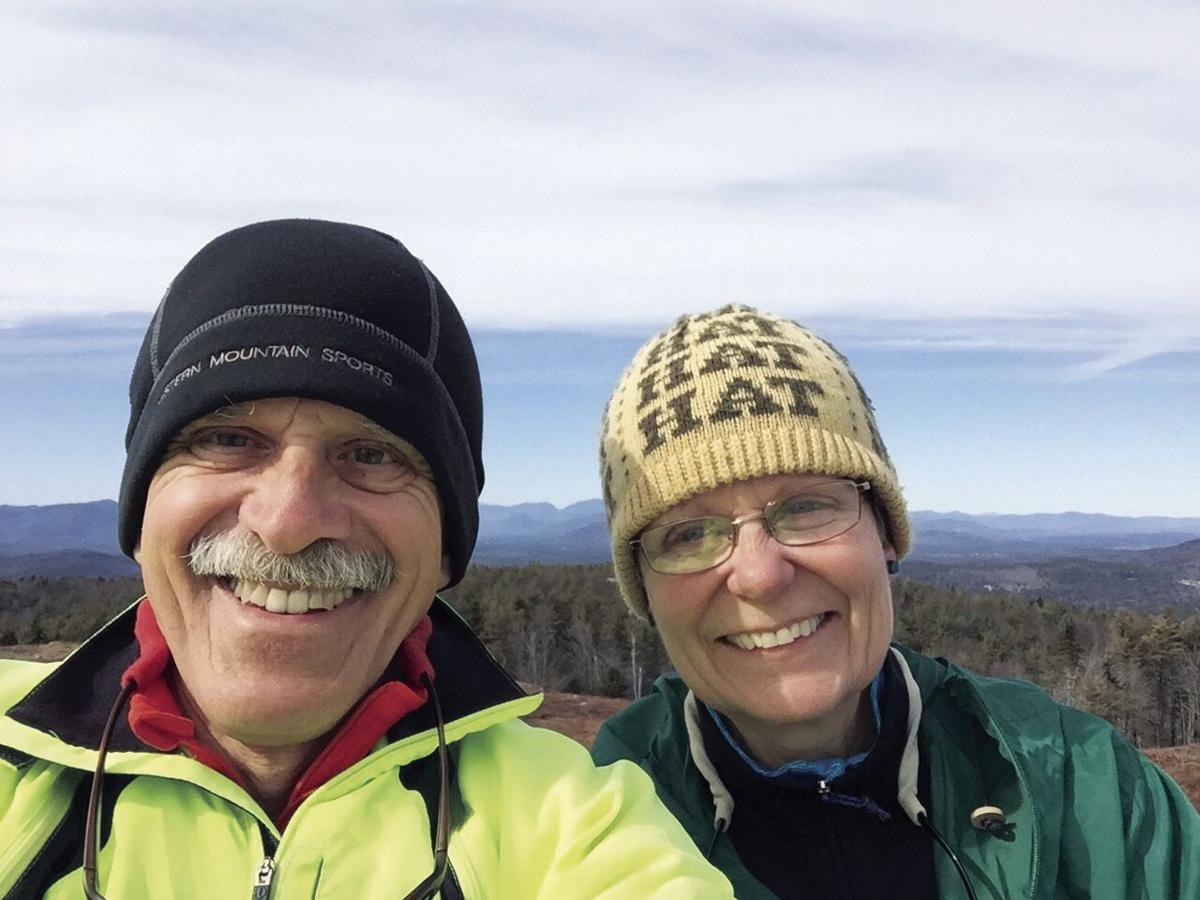 Jerry Knirk and Cam Spence on Foss Mountain in Eaton in about 2018. The couple shares a love of hiking and the outdoors. (COURTESY PHOTO) 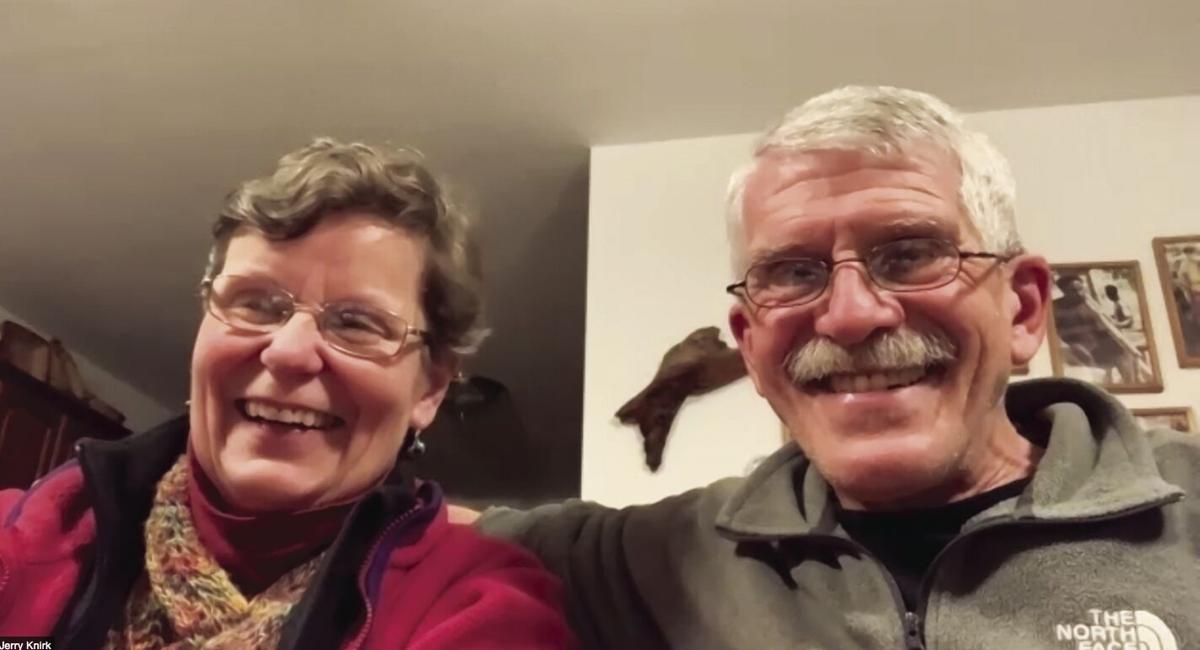 Cam Spence and Jerry Knirk were interviewed over Zoom for Love in the Sun. (TERRY LEAVITT SCREEN SHOT) 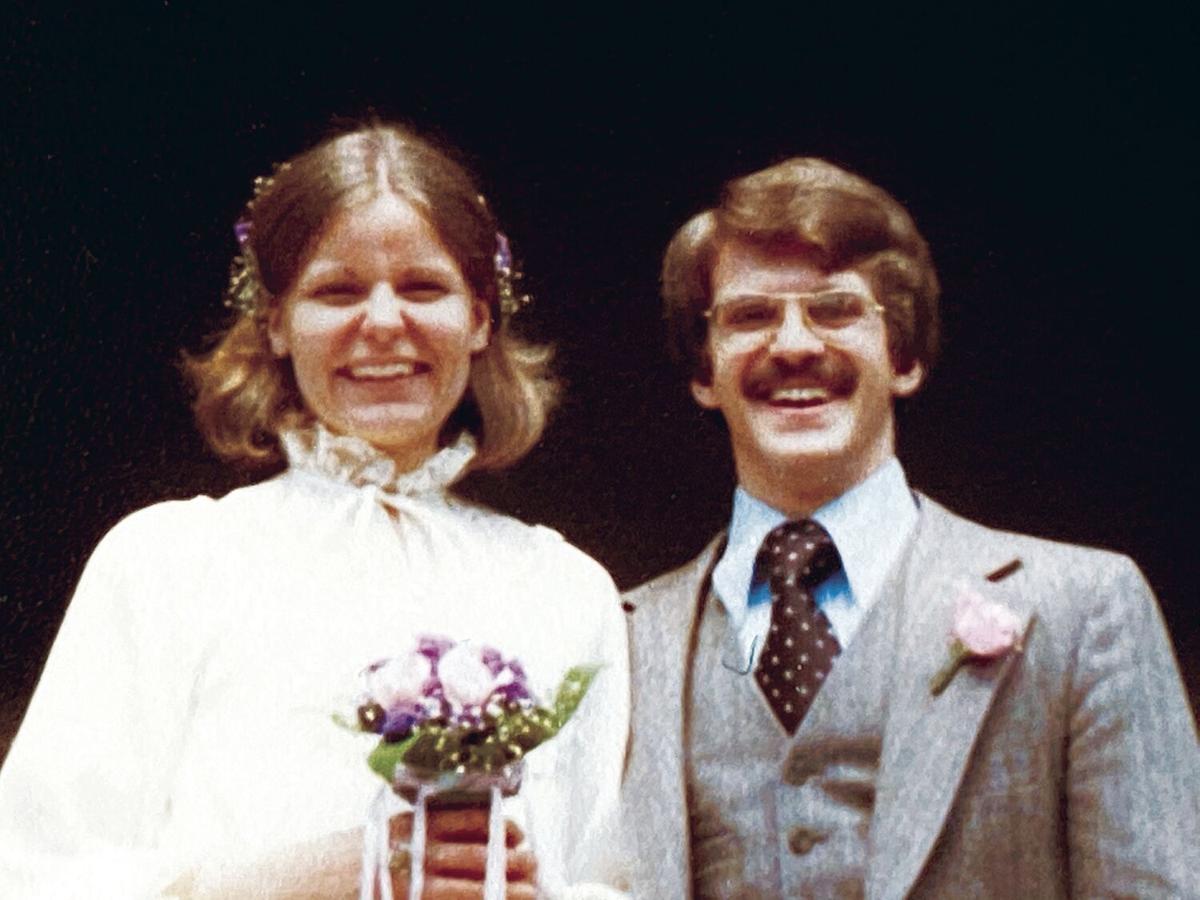 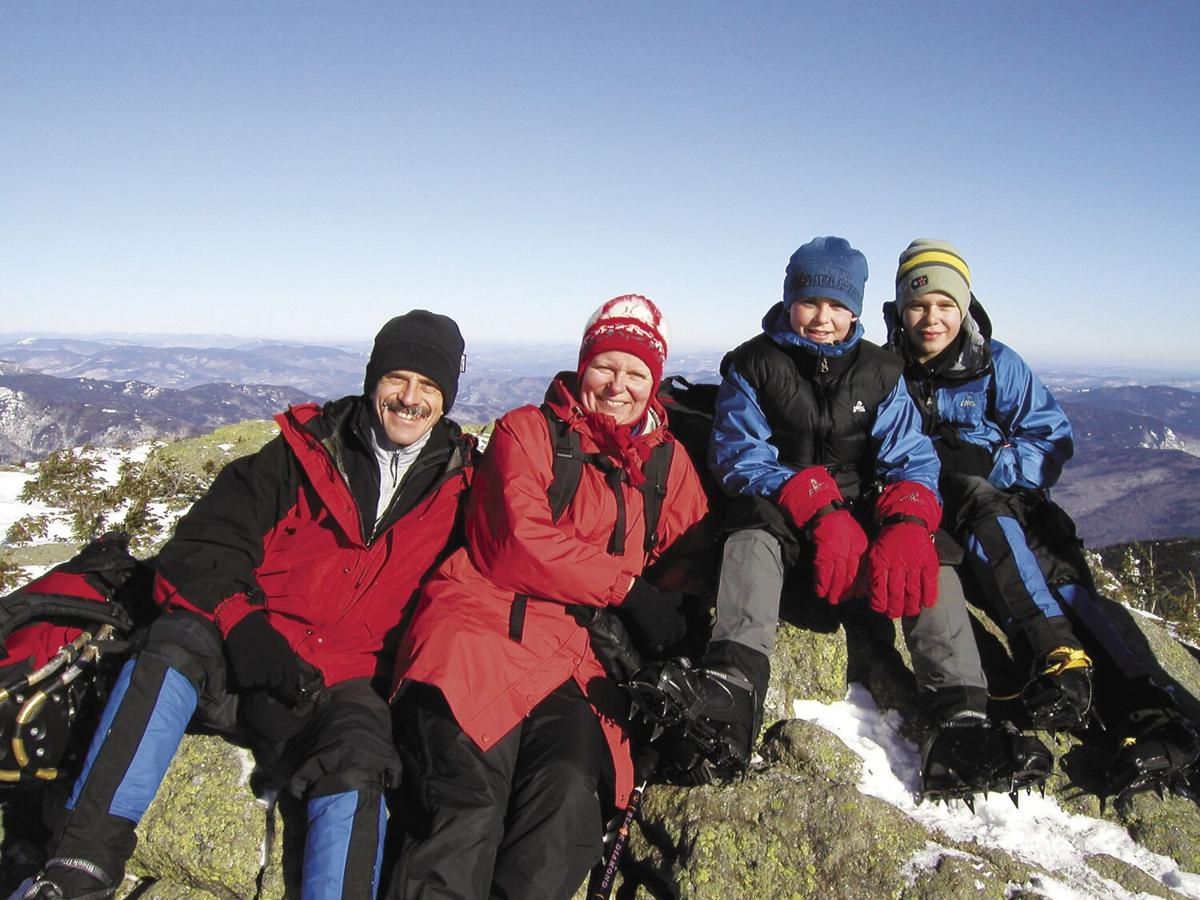 Jerry Knirk and Cam Spence enjoy a winter hike on Mount Hight with their two youngest sons, Colin and Graham, in the late '90s. (COURTESY PHOTO) 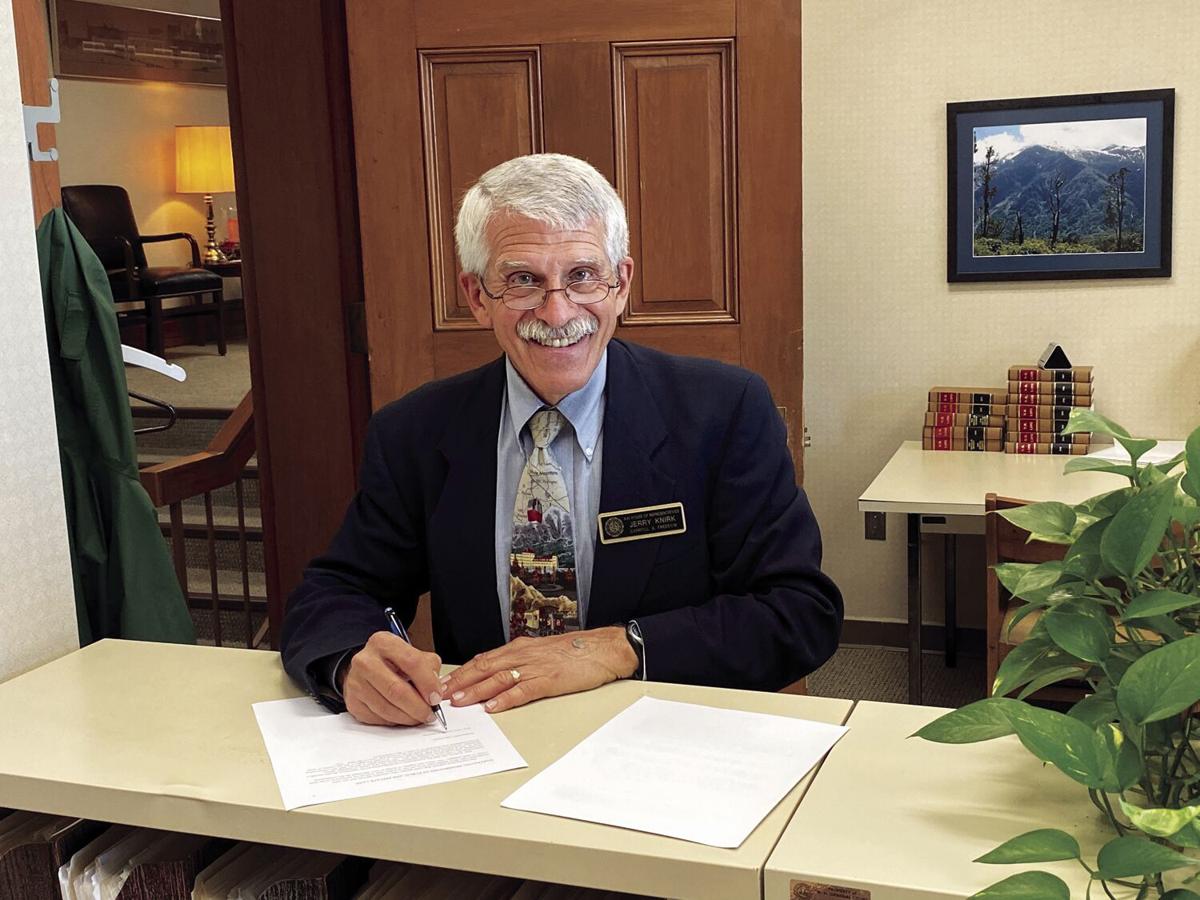 N.H. State Rep. Jerry Knirk signs the report of a legislative commission he chaired in the summer of 2019. (COURTESY PHOTO) 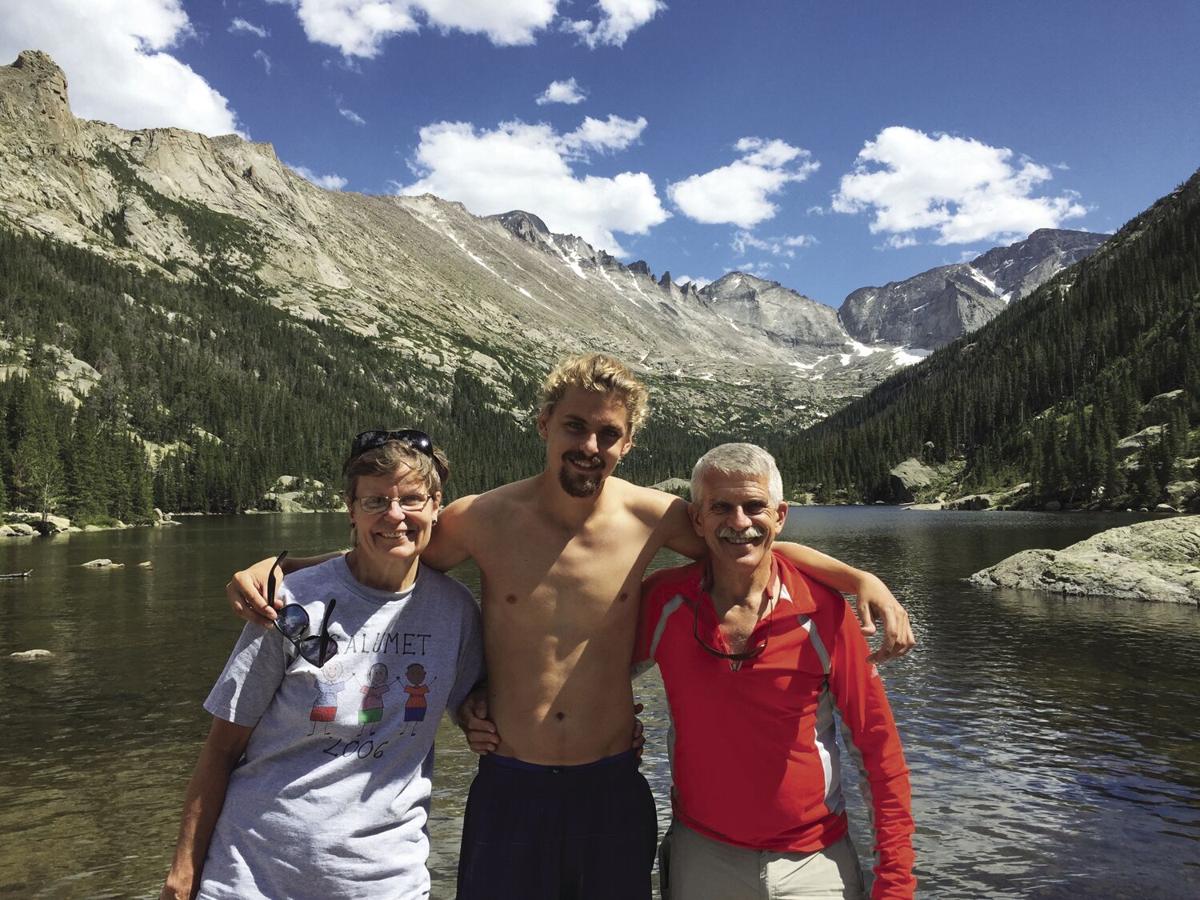 Graham Knirk (center) of Eaton joined his parents Cam Spence and Jerry on a trip to Colorado 2015. (COURTESY PHOTO) 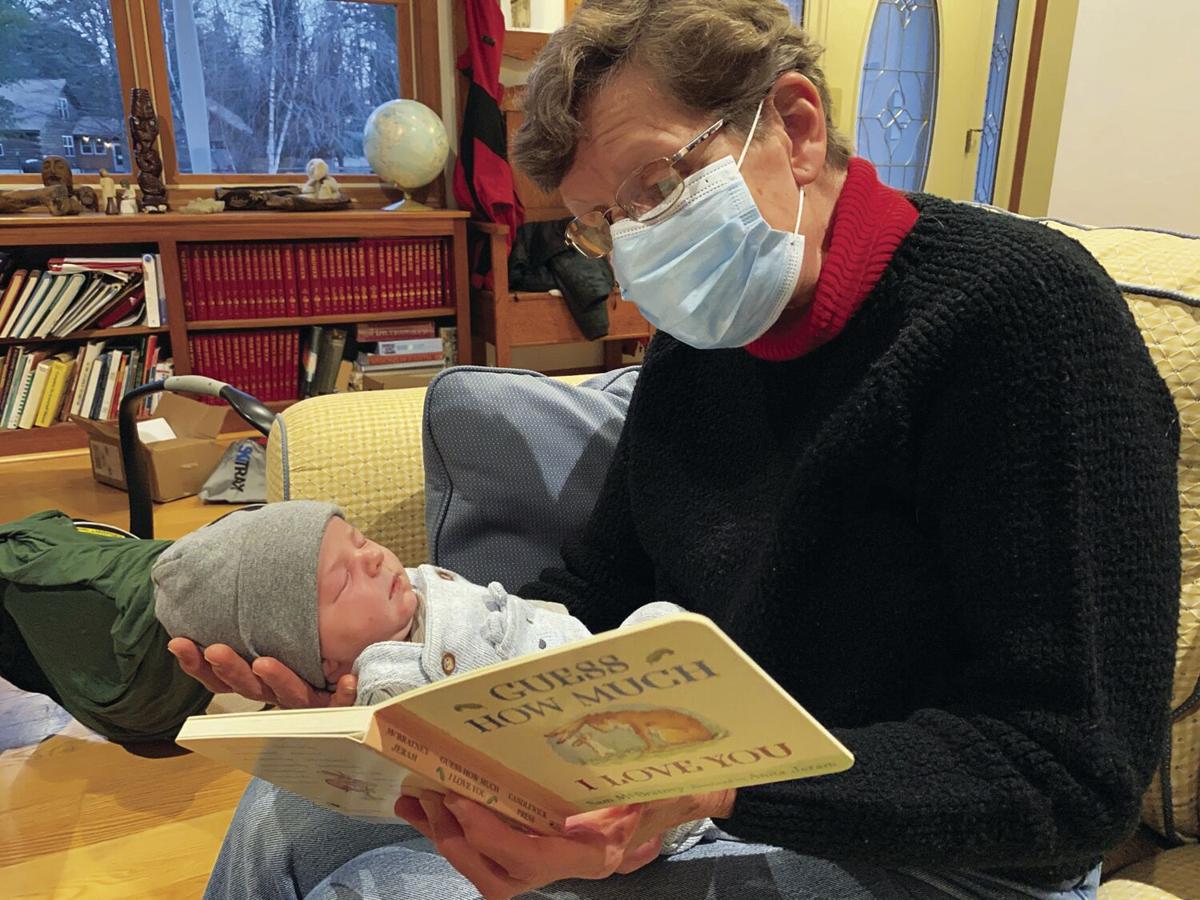 Always the librarian, Cam Spence reads to her grandson, River, at age 4 days, on Nov. 18, 2020. Jerry and Cam love spending time with family but said although Graham's family lives nearby in Eaton, they have only seen their grandson twice because of the COVID-19 pandemic. (COURTESY PHOTO)

Jerry Knirk and Cam Spence on Foss Mountain in Eaton in about 2018. The couple shares a love of hiking and the outdoors. (COURTESY PHOTO)

Cam Spence and Jerry Knirk were interviewed over Zoom for Love in the Sun. (TERRY LEAVITT SCREEN SHOT)

Jerry Knirk and Cam Spence enjoy a winter hike on Mount Hight with their two youngest sons, Colin and Graham, in the late '90s. (COURTESY PHOTO)

N.H. State Rep. Jerry Knirk signs the report of a legislative commission he chaired in the summer of 2019. (COURTESY PHOTO)

Graham Knirk (center) of Eaton joined his parents Cam Spence and Jerry on a trip to Colorado 2015. (COURTESY PHOTO)

Always the librarian, Cam Spence reads to her grandson, River, at age 4 days, on Nov. 18, 2020. Jerry and Cam love spending time with family but said although Graham's family lives nearby in Eaton, they have only seen their grandson twice because of the COVID-19 pandemic. (COURTESY PHOTO)

FREEDOM — The secret to Jerry Knirk and Cam Spence’s wedded bliss, they say, is balancing time together and time apart.

Knirk said they picked up advice about that years ago from an older couple they were friends with.

“Somebody asked what’s the secret to your marriage, and he said, ‘We stay out of each other’s way,’” Knirk said.

“And that was an interesting thing because you would need time to be together but you also need time to be on your own and do your own little things and dreams and not be in the way of the other person.”

The couple, who live in Freedom, are well-known in the Mount Washington Valley.

Cam, a former biology researcher and nurse, is a librarian who has worked at school libraries in Tamworth and Freedom and now is on the staff at Madison Public Library.

The couple has been married for 42 years, meeting in Boston in the 1970s, when Jerry was a medical student and Cam a biology researcher.

Jerry remembers meeting his future wife by chance when she was having coffee with a mutual friend and he walked into the coffee shop and invited himself to join them.

“For me, it was love at first sight, but it took a little while to convince her,” he said.

Over the course of their conversation, he found out that in addition to being cute, “she was really smart, she was a biologist, she was doing cancer research at the Jimmy Fund using tissue culture — which is something I knew nothing about — and that she was a hiker and liked the outdoors.

“The more I found out about Cam, the more I found that she had all the things I wanted — smart, scientist, liked animals and nature, independent, unafraid to tackle tasks and repairs, committed to fitness and activity, liked hiking,” he recalled during a recent Zoom interview with the Sun.

For her part, Cam said, “I wasn’t that impressed.” But she gave him her phone number, and he called to make plans for a date.

Although they didn’t move to Freedom until 2007, they have a longstanding love for the region, beginning with that first date, which was a trip to hike Mount Chocorua.

“Well, it worked out,” his wife joked.

Cam found things she liked about Jerry, too. “He was interested in medicine, but he was also interested in other things.” They shared a love of music (going to the Tanglewood Festival in the Berkshires) as well as theater and travel. “It just sort of gelled,” she said.

The first few years of their marriage, the couple spent more time apart then together. They married in 1978, the year Jerry graduated from medical school and started his surgical residency in Boston, working between 100 and 144 hours a week.

When he came home, he would often just fall asleep, sometimes in the middle of dinner.

Once when they were out to dinner, Cam said, “The waiter came and asked if we would like dessert. I looked across the table, and he was sound asleep. I said, ‘No, just the check, please.’”

After his residency years were over, Jerry noted, “We had a couple of years where we had to kind of adapt to actually seeing each other.”

By then, they had a 3-year-old son, Ian, and Cam had earned a nursing degree from Northeastern but found it impossible to start a career while caring for their young son.

“That balance of giving each other room so we can each grow and do our own things is one piece,” said Jerry.

“But then we also did commit ourselves to beginning new, big activities at different points in our life — like in 1984, we both took a scuba diving class together and became certified scuba divers.”

It became a family activity, with the boys each becoming certified when they reached the age of 12.

“In the summers, we swim together, we bike together,” Jerry said. “So we have lots of together times.”

In the 1990s, the couple began spending summers in Freedom, where Cam worked at Camp Calumet — with Jerry commuting on weekends — and they took up contradancing at the weekly dances in Tamworth.

They’ve also been involved in various singing groups, most recently the Silver Lake Singers since 2015.

Jerry said one of the best things they did for their relationship was to start having Friday night dates, sending the kids to bed early and just making time for each other.

“We’d have two- or three-hour dinners where we could sit and talk about all kinds of things, the problems of the world, and it was wonderful,” Jerry said. “That was one of the things that cemented our relationship.”

In 2007, they moved to Freedom full-time, and Jerry took a job as a non-surgical spine consultant at Saco River Medical Group, working there until he retired in 2015 to spend more time with his grandchildren.

They love spending time with family and feel fortunate that their youngest son, Graham and his wife, Jena, live in the valley, with Jerry and Cam’s grandson River born just this past November.

“We have seen him precisely twice with masks on because of COVID, and they live in Eaton 15 minutes from us,” Jerry said, adding they are looking forward to seeing more of them in the days ahead.

Graham works at P.C. Hoag in Tamworth and Jena at Starting Point.

Their other sons also live in New England. Ian, 40, is a surgical technician in Massachusetts; he and his wife, Heather, have two daughters. Colin, 32, is a brewer at Throwback Brewery and lives with his wife, Lindsay, in Stratham.

Jerry’s retirement, however, was short-lived, as later that year he was elected to the New Hampshire House of Representatives, a seat he has proudly held since, serving on the Health, Human Services and Elderly Affairs Committee and helping constituents.

“I get called about everything,” he said. “It’s non-stop, which is fine.”

He and Cam still find time for community doings. In addition to being members of the Silver Lake Singers and the Sandwich Singers, and their continued involvement with Camp Calumet and the Lutheran Church of the Nativity in North Conway, Jerry also has served as chair of the board of Green Mountain Conservation Group.

Always busy, when COVID hit last March, they were getting ready to improve the insulation in their home. They spent the first few weeks of the pandemic cleaning out their attic and getting rid of things.

After weeks, though, Jerry said, “we had to do a little work on getting ourselves to mesh a little better. The novelty wears off after a little while and the reality sets in that you’re not seeing anybody else.

“But we got through it. We’ve been at this a long time, we’ve been together for over 45 years.”

One memorable moment was when they prepared to have the spray foam insulation applied and had to be out of the house for 24 hours.

In a more carefree year, they would have had a night out, perhaps in Portland, to celebrate their anniversary, Jerry said, but with full pandemic restrictions in place, they had nowhere to go and ended up camping out in their greenhouse.

“That’s how we woke up on our anniversary on April 29, in the greenhouse,” Jerry said. “That was COVID.”