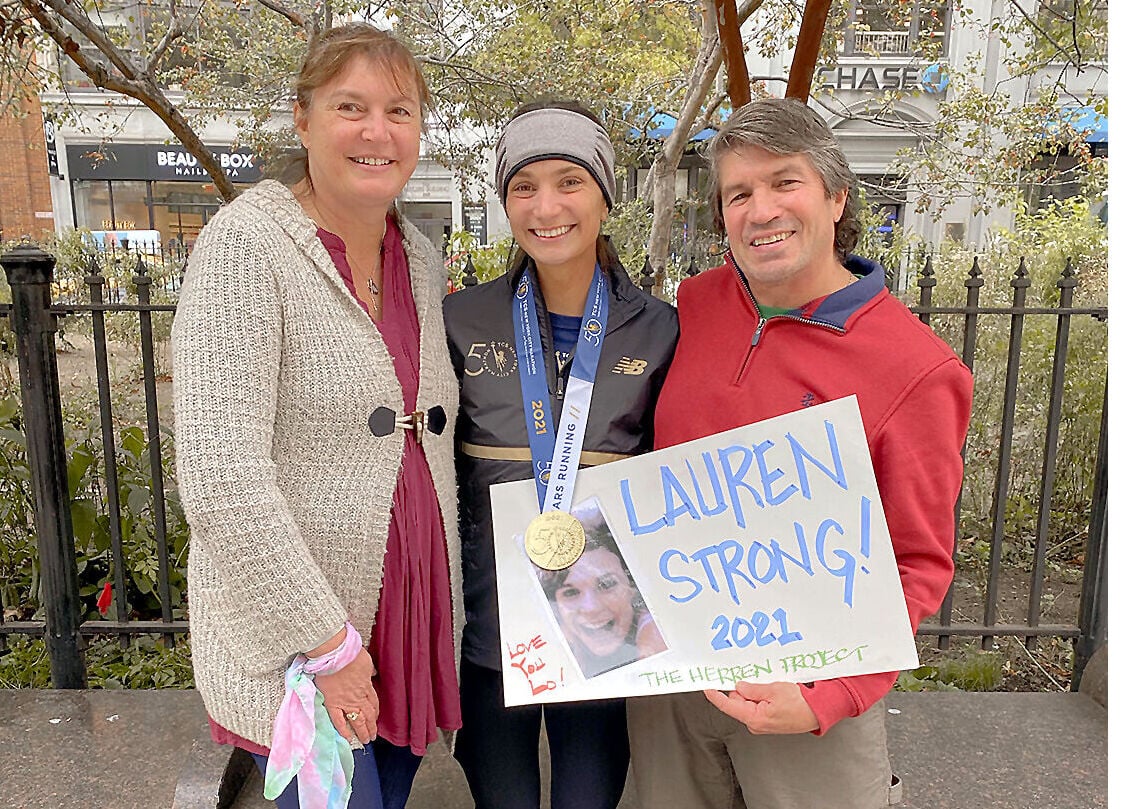 Maggie LaRoche (center) with her parents Melissa and Philip LaRoche, of Silver Lake after she completed the New York City Marathon on Sunday. Maggie ran the race in memory of her late sister Lauren and to bring awareness to substance abuse and mental illness. (COURTESY PHOTO) 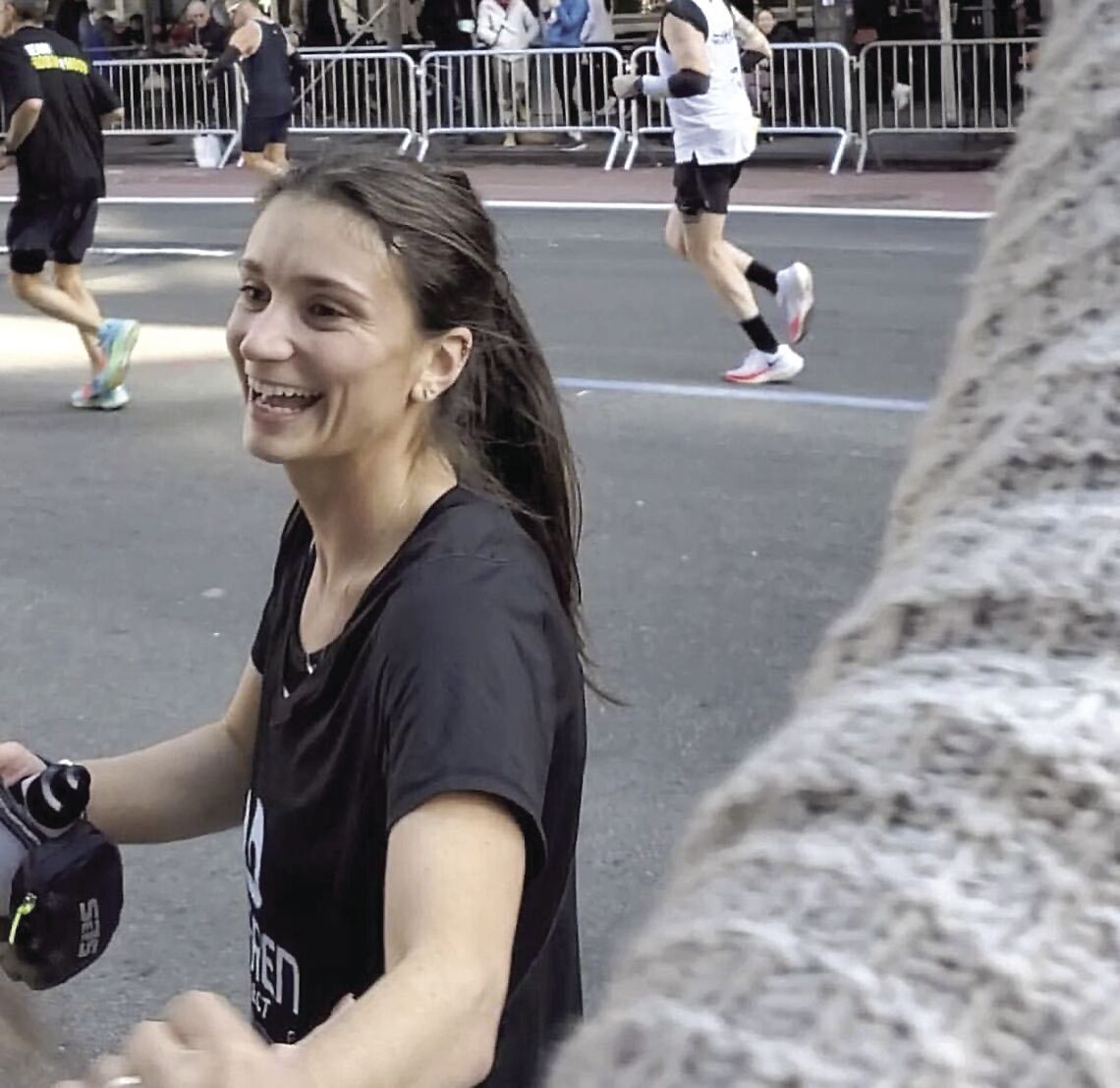 Maggie LaRoche sees some familiar faces along the New York City Marathon course on Sunday. She said having such support along the route inspired her to finish her longest race ever. (COURTESY PHOTO)

Maggie LaRoche (center) with her parents Melissa and Philip LaRoche, of Silver Lake after she completed the New York City Marathon on Sunday. Maggie ran the race in memory of her late sister Lauren and to bring awareness to substance abuse and mental illness. (COURTESY PHOTO)

Maggie LaRoche sees some familiar faces along the New York City Marathon course on Sunday. She said having such support along the route inspired her to finish her longest race ever. (COURTESY PHOTO)

CONWAY — “I’m not going to lie, it was tough,” said Maggie LaRoche, who completed her first marathon — the 50th running of the New York City Marathon — last Sunday, running to honor the memory of her late sister Lauren Brooke Tresp and to bring awareness to substance abuse and mental illness.

LaRoche had set two goals, to finish the race and to try to run 26.2 miles in under four hours. She crossed the finish line in 3:48:02.

“When I signed up to run this race my only mission was to raise awareness and money for those who struggle with addiction so that no one would ever have to feel the way I felt on Jan. 2 when I got that phone call,” said LaRoche, 25, a 2014 Kennett High graduate from Silver Lake who lives in Boston. “I never thought that the training, the race and the people I met along the way would actually be a treatment for my soul as well. I am so blessed to be surrounded by so many amazing people — my heart is so full.”

LaRoche, a senior associate scientist at Pfizer working on drug vaccine development, wanted to do something to honor Lauren, who died on Jan. 2 at the age of 28.

A week after Lauren’s passing, LaRoche set her sights on a running challenge — the New York City Marathon. She also wanted to fundraise in her sister’s memory for local organizations White Horse Recovery and MWV Supports Recovery along with the nationally-known Herren Project.

LaRoche started with a goal of raising $5,000. She quickly eclipsed that mark and decided to shoot for $10,000., another target she surpassed.

As of Friday afternoon, $13,895 had been raised. You can see LaRoche’s fundraising page at tinyurl.com/ykm8d5d6

“She is exhausted but so happy,” Melissa LaRoche, Maggie’s mom, said minutes after the race. Melissa and Philip LaRoche, both of Silver Lake, were among a wide group of supporters who made the trek to The Big Apple to cheer LaRoche on.

“That’s what got me through,” LaRoche said Tuesday by phone from her sofa, still recovering. “It was great having that support, people believing in me. I hit a couple of walls along the course. Seeing people at mile 17, that helped a lot. Just before that, I was thinking about stopping.”

LaRoche ran with a sticky note that listed where her support crew would be.

“Seeing, ‘Go, Maggie,’ signs, I can’t say enough about the support,” she said.

LaRoche covered the course with a running tag on top of her running shoes that read, “26.2 (miles) for Lauren.”

“Lauren was a rarity,” LaRoche said. “I’ve not met anyone like Lauren in my life. She was the most passionate, true-to-herself person. Lauren was a colorful, vibrant person and my best friend for 24 years.”

LaRoche said her sister was with her on Sunday.

“To my sister Lauren, I love you so much,” she posted on Facebook.

'Thank you for being there every step of the way (especially on those hills — sheesh). I miss you more than I can put into words.”

She added: “Life is short — love those in your life deeply. Cheers to finishing this marathon, cheers to the Herren Project and all the money we raised — cheers to you Lauren Brooke!”

LaRoche said her feet took a beating and she has several blisters.

“You don’t want to know,” she said, laughing. “This was my last long race for now. I do plan to do a fun relay race with friends in December. Until then, I’m going to be very friendly with my couch."