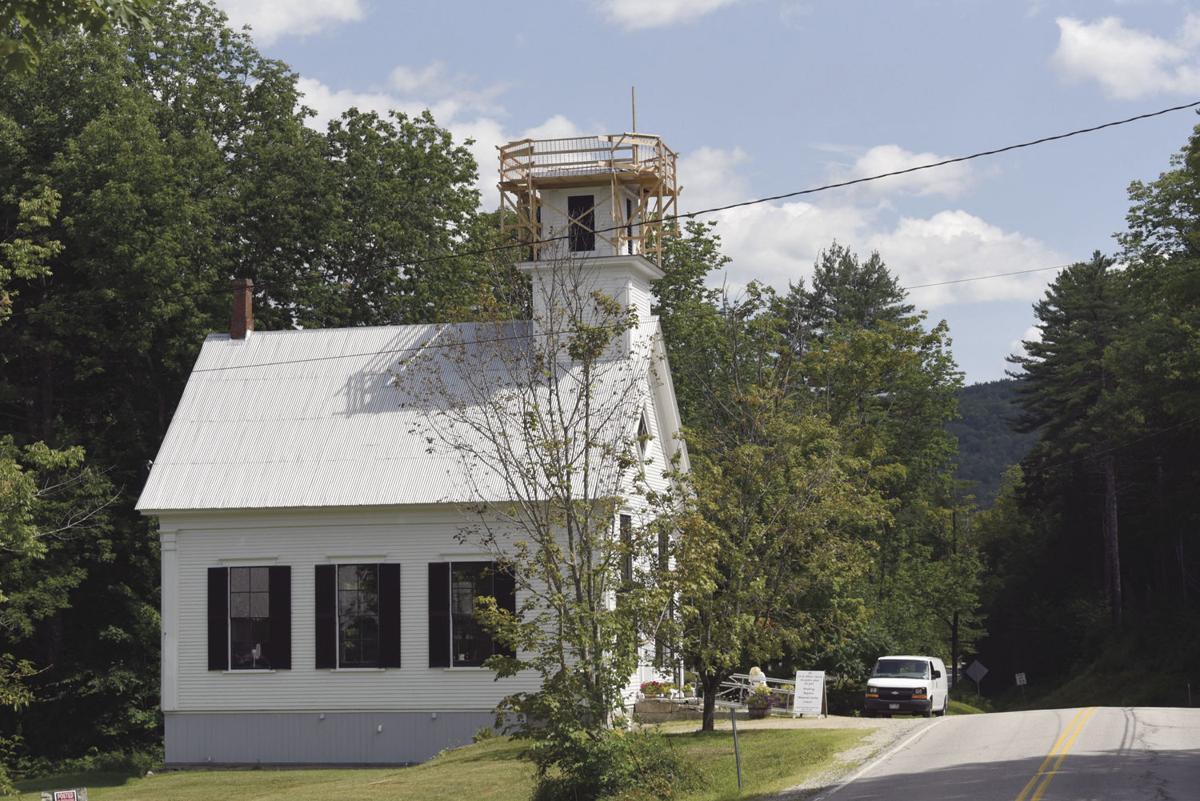 The Little White Church in Eaton, the non-denominational site of weddings, concerts and other events, is seen Monday. The steeple had to be taken down in the spring after water damage made it unstable. Repairs came to a halt when the board ran out of funds. Now a GoFundMe page has been set up. (JAMIE GEMMITI PHOTO) 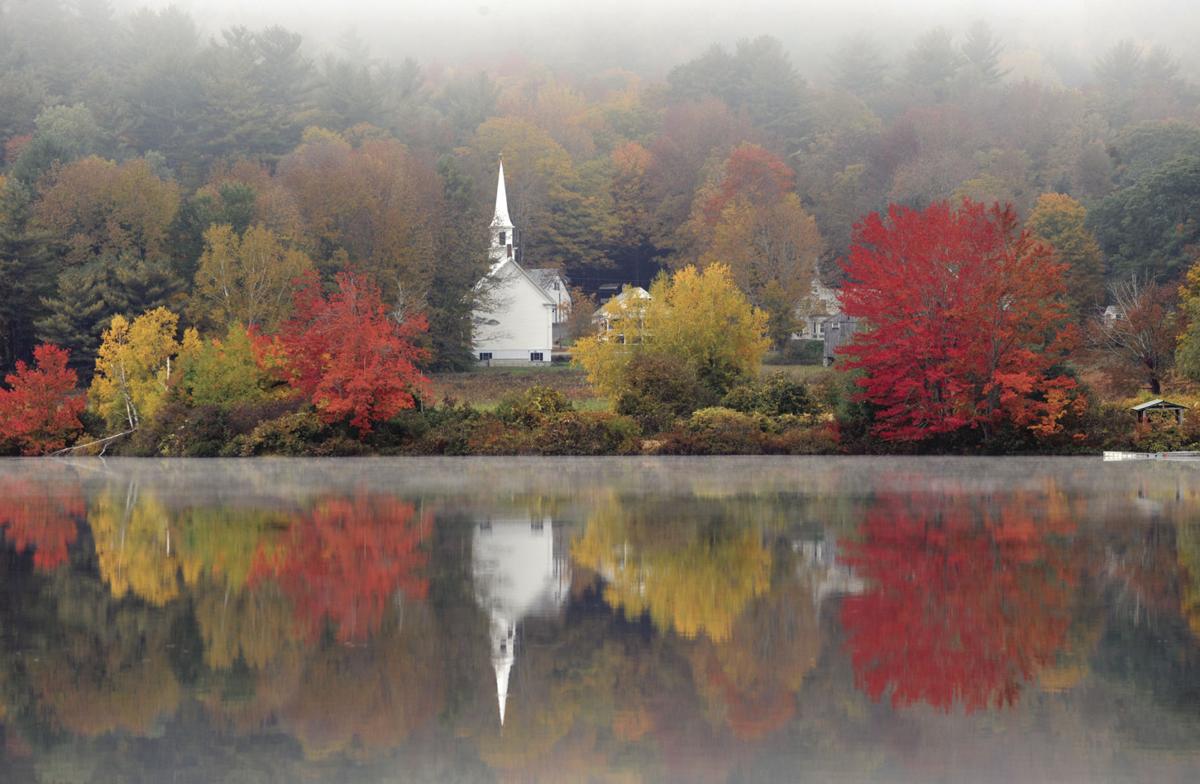 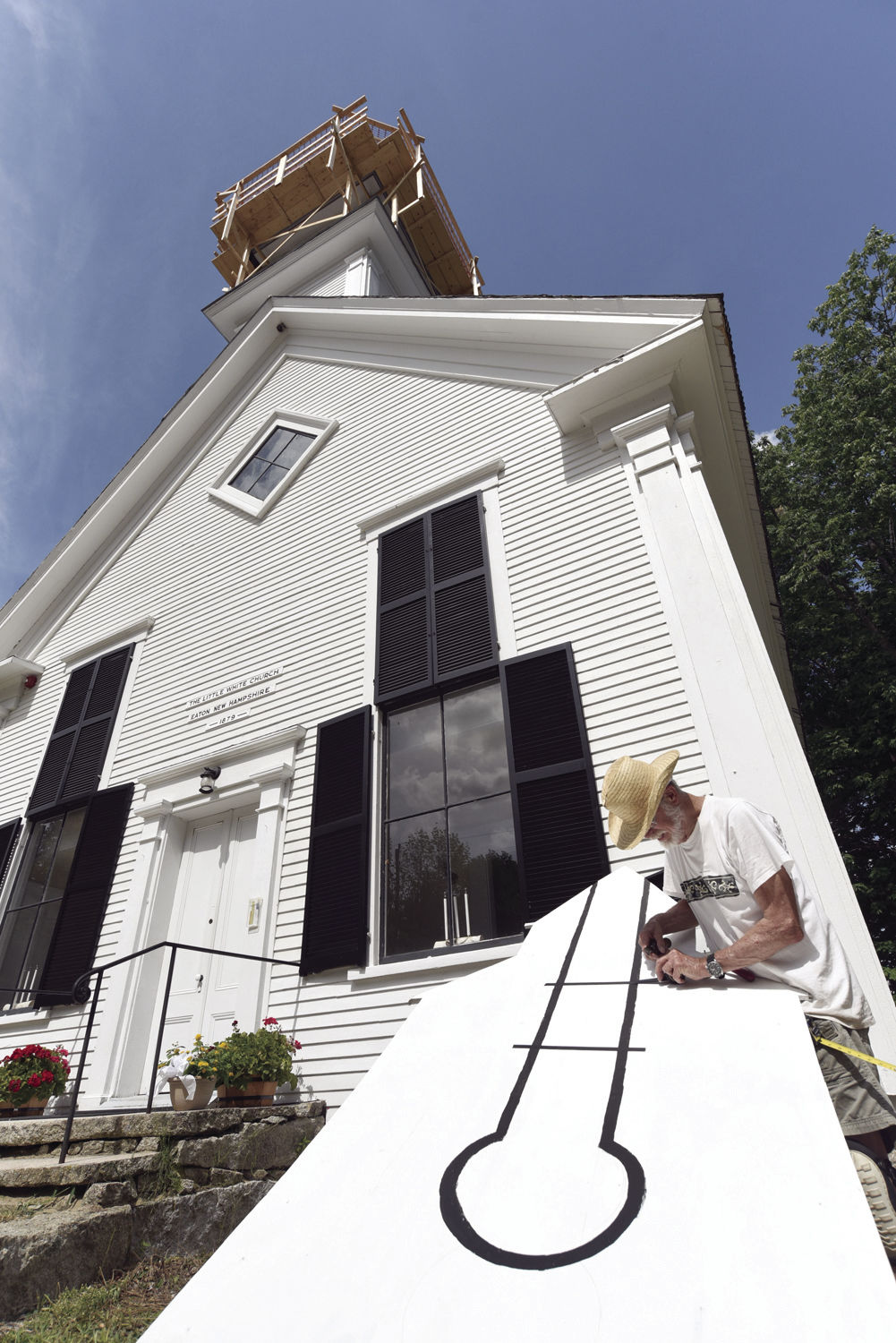 Little White Church President John Hartman works on a fundraiser sign in the shape of the church steeple on Monday. Hartman says they have about $10,000 raised so far and they need about $100,000 for the repair of the steeple. (JAMIE GEMMITI PHOTO)

The Little White Church in Eaton, the non-denominational site of weddings, concerts and other events, is seen Monday. The steeple had to be taken down in the spring after water damage made it unstable. Repairs came to a halt when the board ran out of funds. Now a GoFundMe page has been set up. (JAMIE GEMMITI PHOTO)

Little White Church President John Hartman works on a fundraiser sign in the shape of the church steeple on Monday. Hartman says they have about $10,000 raised so far and they need about $100,000 for the repair of the steeple. (JAMIE GEMMITI PHOTO)

EATON — The Little White Church has been a staple of photographers for years given its location on Crystal Lake and the colorful foliage that surrounds the quaint. 140-year-old edifice in the fall.

But photographers are doomed to disappointment, say board members of the non-profit church, until money is raised to pay for replacing the steeple. After falling into disrepair, it had to be removed this spring.

According the Sun’s Eaton Town Columnist Nancy E. Williams, “The steeple had always required periodic maintenance, but last winter it sustained considerable water damage on the north side.”

Williams wrote that the church held a yard sale in July that was part of a larger fundraising project “that will include a public appeal that has already begun.

She wrote in her June 17 column that the Little White Church “is non-denominational, non-profit and non-political where numerous services, weddings, memorials, concerts and fun community activities occur throughout the year.”

Hopes were high that the estimated $100,000 needed for the project could be raised and the steeple replaced soon. But fundraising has gone slowly.

Little White Church board president JohnHartman says about $20,000 has been raised so far.

Hartman told the Sun last Friday that the church’s board voted July 30 that work had to cease.

“We decided it was just not possible to raise the funding that would be necessary to complete the job,” he said.

A GoFundMe page has been set up.

“A leak in the roof ultimately revealed that the supporting beams were rotten. Though it is difficult to imagine this breathtaking scene without a steeple — in fact, it is now gone,” said church trustee Dana Cunningham.

Problems with the steeple began in November with peeling paint. Then in the spring, there were water leaks in the sanctuary. Further investigation revealed the steeple’s main support poles had rotted up to 90 percent, to where it had to come down for safety reasons. Insurance denied the claim, stating this was a “long-term” water leakage problem, Hartman said.

The Little White Church was built in 1879. In December 2017, it earned a write-up on onlyinyourstate.com.

“If you haven’t seen the stunning church tucked in tiny Eaton, your assessment of the Granite State’s offerings simply isn’t complete,” the website said. “The Little White Church in Eaton is about as picturesque a New England chapel as you can imagine.”

Despite being over 100 years old, the church is not on the National Register of Historic Places. Hartman said that in his 12 years of being president church repairs were covered by appeals to the church mailing list.

“This is an entirely different situation,” he said, noting that builder Tom Costello of Eaton had been hired to do the work. “We are very pleased with what he has done,” said Hartman.

Despite not having a steeple, the church is fully operational, said Hartman, but said going steeple-less in the long term would “not be acceptable.”

“We are going to replace it,” he said.

Hartman said they are still trying to get a bank line of credit but probably won’t get approved until September.

“That’s getting pretty close to winter to do anything about the steeple, besides, we would rather go the donation route. The church has never had a mortgage or bank debt that I know of,” said Hartman.

Meanwhile, the church also is trying to raise money to fix up its 1908 Steinway Model O grand piano.

Cunningham, a pianist and composer, said she moved from Texas in 1998 and saw the church for the first time in the brilliant fall of that year.

“I remember just having my breath taken away, just a visceral reaction to the scene of Crystal Lake — the fall colors were splendid and that church steeple standing out among the trees,” she said.

Asked what the loss of the steeple means, Cunningham said it affects one’s “sense of place.” She said the steeple lifts one’s gaze and inspires a sense of gratitude.

“We have already had people cancel their weddings because they don’t want a church without a steeple,” said Cunningham. “It’s difficult to imagine it not being there, and yet it’s gone.”

Of the piano, Cunningham said: “It’s very unusual for a church of that size and kind of church to house a piano that’s that stunning.”

The piano has been maintained, but it’s still over a century old and needs work in terms of its sound board, strings, pin block and action, Cunningham said. This work would cost about $8,000. “I was about to raise funds for that very restoration when the steeple issue appeared and took the front seat in terms of fundraising,” said Cunningham.

The church hosts a number of musical and civic events, including “Kayaks and Casseroles,” where people paddle around the lake and then share a meal at the church.

One of Cunningham’s favorite memories is of hearing a pianist play Beethoven’s “Moonlight Sonata” as the full moon shone through the church’s windows. “It’s just an iconic, sacred, beautiful space,” said Cunningham.