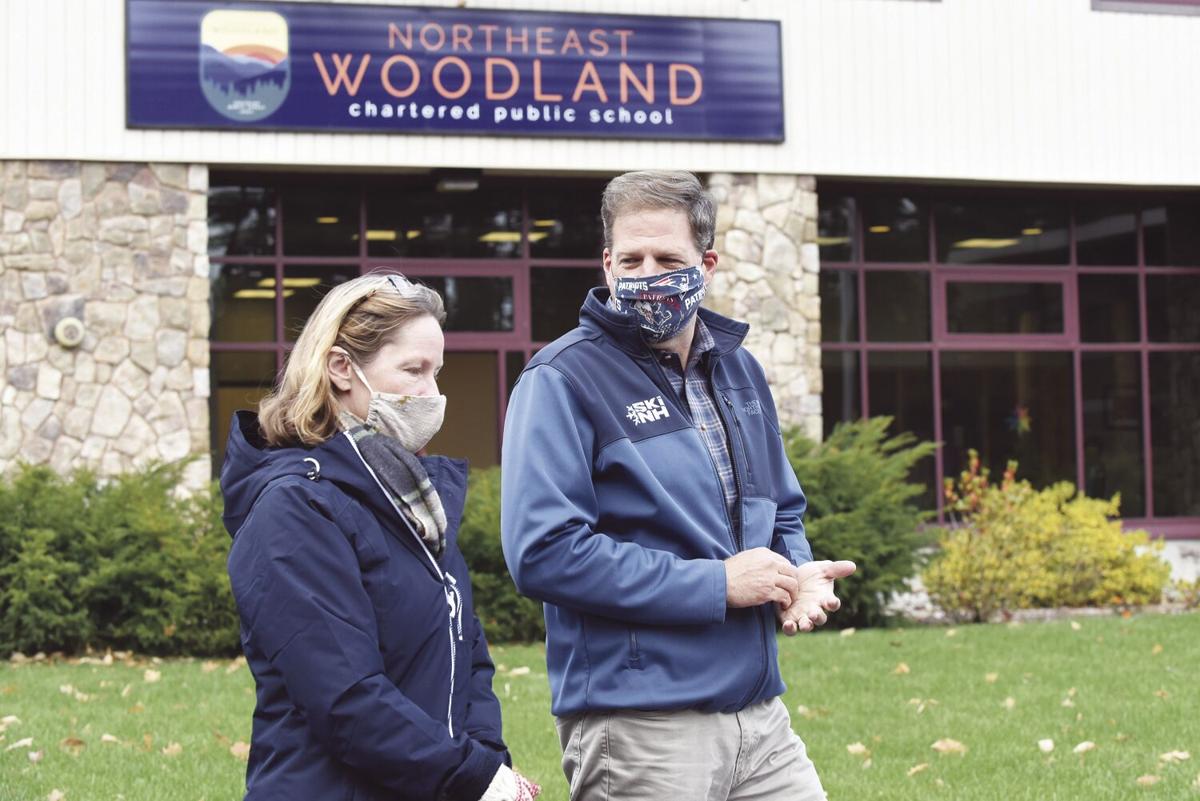 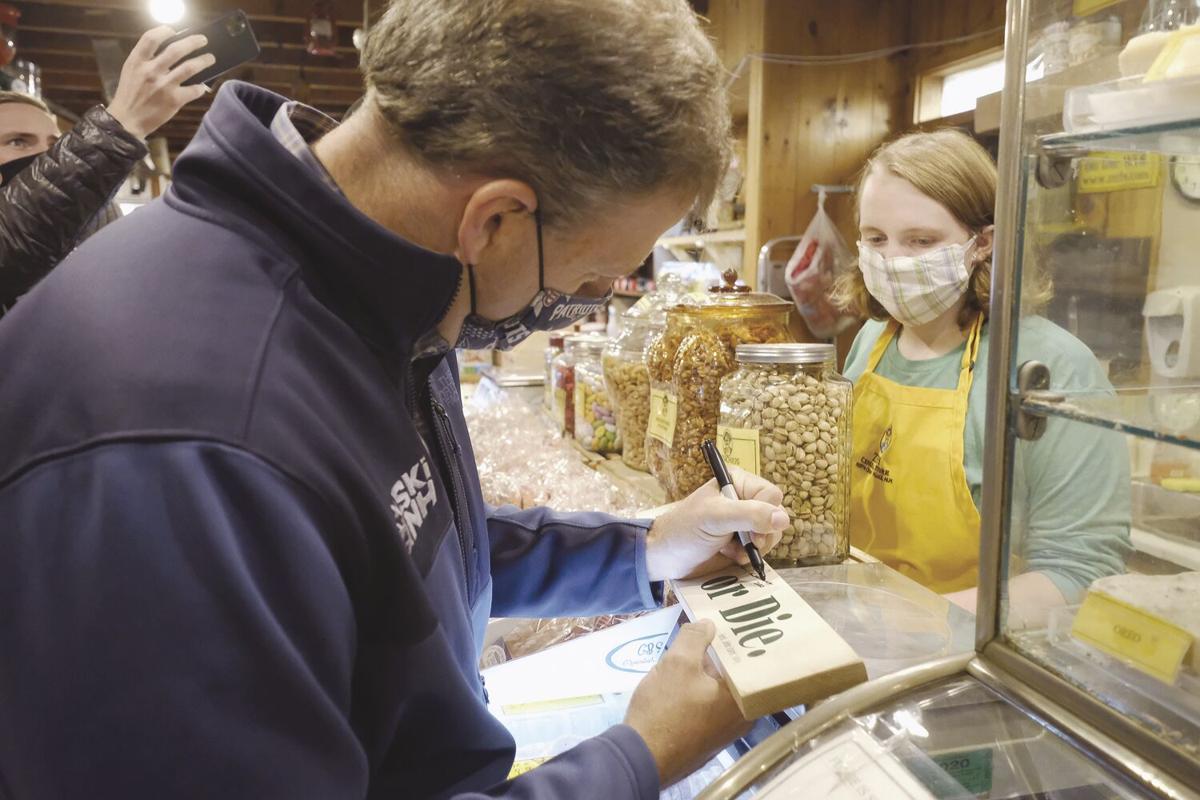 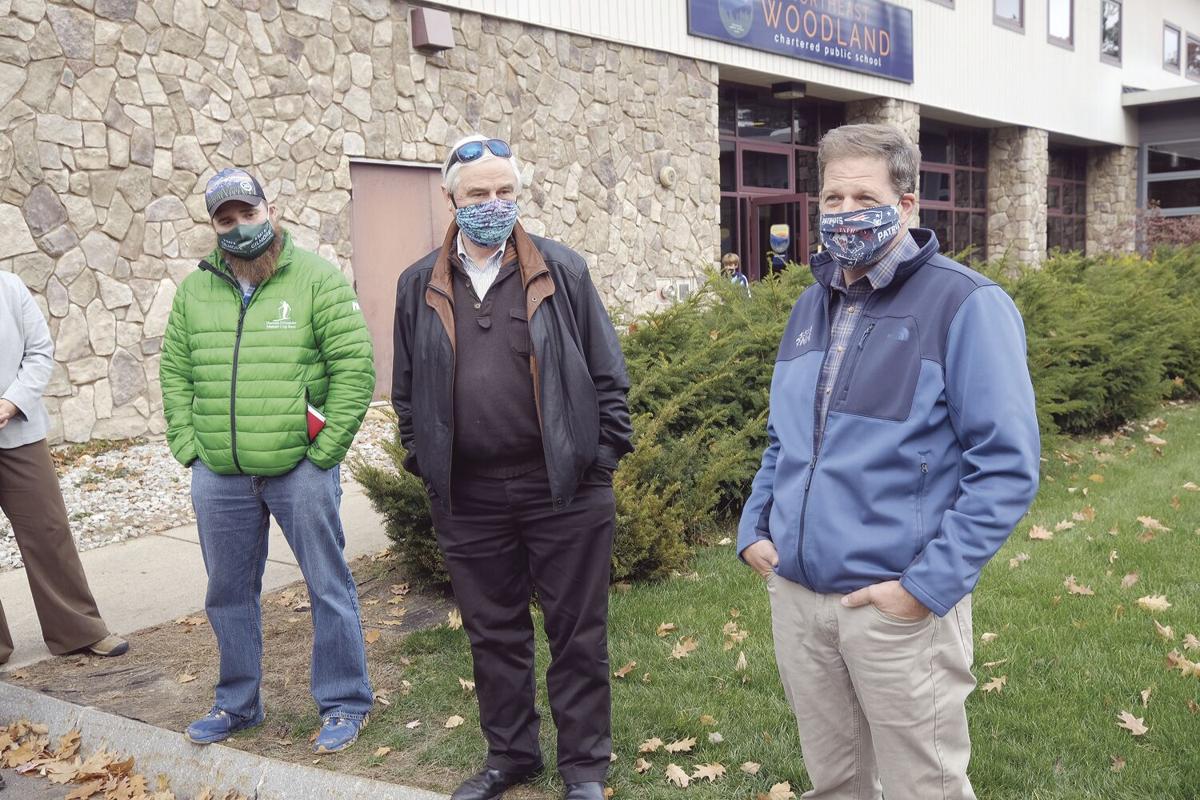 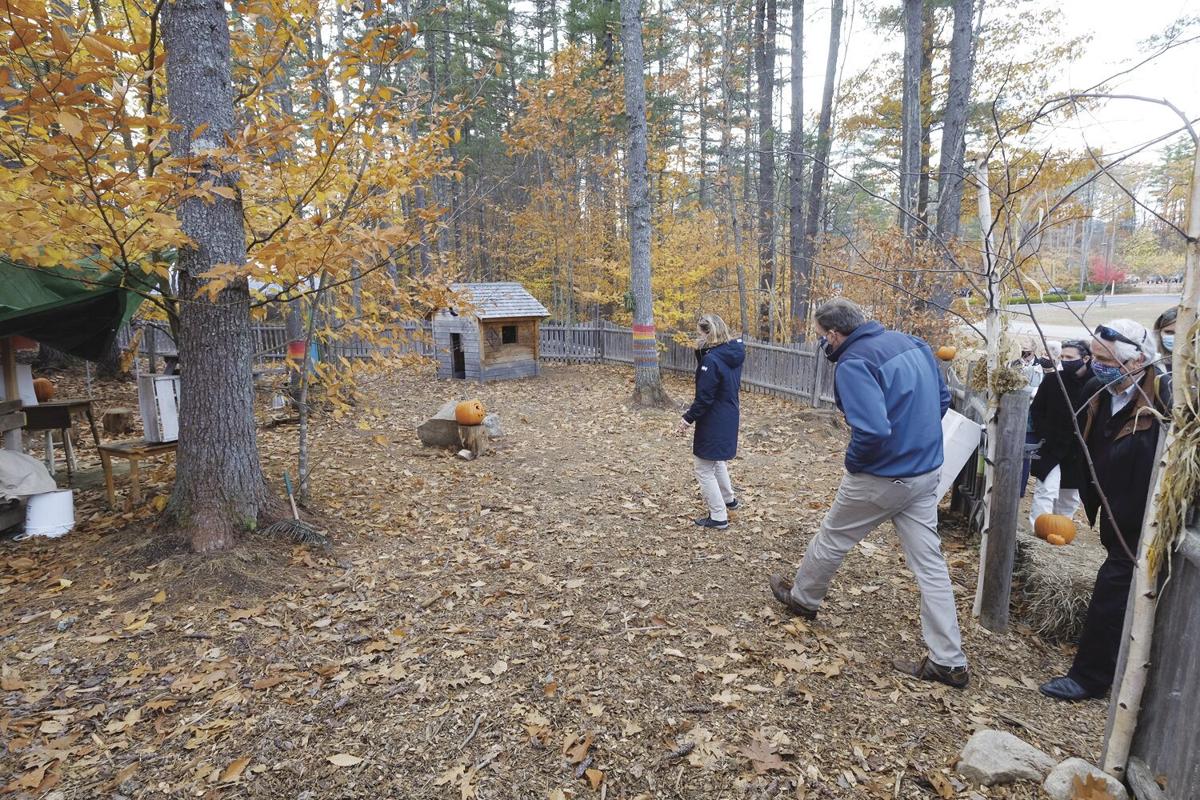 Gov. Chris Sununu with head of school Sarah Arnold (left) State Sen. Jeb Bradley (right) and founding board members and others take a tour of one of the outdoor learning areas of the Northeast Woodland Chartered Public School Tuesday. (JAMIE GEMMITI PHOTO)

Gov. Chris Sununu with head of school Sarah Arnold (left) State Sen. Jeb Bradley (right) and founding board members and others take a tour of one of the outdoor learning areas of the Northeast Woodland Chartered Public School Tuesday. (JAMIE GEMMITI PHOTO)

CONWAY — Gov. Chris Sununu on Tuesday afternoon toured the Northeast Woodland Public Chartered School in Conway. During the visit, he blasted Democrats in the Legislature for holding up federal funding that would have helped charter schools like Northeast Woodland.

About 14 people were on the tour, including Jason Gagnon, who chairs the school’s board. All wore masks.

“This is a model of success,” Sununu told the Sun after his tour.

“The fact that $46 million for expansion of this type of opportunity was rejected, I think it says a lot and why I think everyone needs to go out and vote — not to make it political, but they did. Sen. Bradley, myself and others are going to fight tooth and nail to make sure we invest in these kids,” Sununu said.

In mid-October, the Joint Legislative Fiscal Committee tabled without debate a third attempt to accept part of a $46 million federal grant for public charter schools. The vote was once again split down party lines. Democrats said the grant would only have provided start-up funds and was not fair to struggling non-charter public schools.

Sununu said Republicans are united in their support for this money, and Bradley added that Democratic governors John Lynch and Maggie Hassan sought similar grants in the past.

“What’s really sad is these are the same types of grants that Gov. Lynch and Gov. Hassan, before Gov. Sununu, fought for,” said Bradley.

“They had bipartisan support across the board, and I don’t know what’s different. The kids are getting hurt by the refusal to accept the grant.”

Bradley earlier said that there are about 1,300 students around the state who are waiting to get into charter schools.

Northeast Woodland, a Waldorf-styled school, opened in September and has an enrollment of about 146 students from pre-kindergarten to seventh grade. The school has a staff of about 18.

Northeast Woodland’s Head of School Sarah Arnold led the governor on a tour of the grounds, which included a large outdoor learning space in a wooded area across Technology Lane.

The outdoor space is divided into sections based on age/grade. One gets to each section by walking along a little trail. Anyone who looks at the trail will see stick and branch forts the children made as well as some log seats decorated with paintings of insects.

“We do have a real focus on outdoor education, which will be building over the next several years, including doing things like rock climbing and canoeing and kayaking and mountain biking,” sad Arnold.

“COVID has thrown some wrinkles in that for this year, we’re not able to do some of the field trip kind of things that we ordinarily would so we’re really taking advantage of the outdoor (space). We have 4 acres here. ... We’ve got some really excellent forts under construction.”

Sununu also went inside and saw the classrooms.

The indoor spaces for kindergartners have a homey feel. Classrooms for the older children appear more traditional with desks spaced apart and white boards for the teachers.

Northeast Woodland is located at 53 Technology Lane, which is the building at Tech Village where Granite State College used to be. The school is leasing the college’s old space which totals about 12,000 square feet.

Granite State College’s courses have gone almost totally online. It has offered the space for sale to Northeast Woodland but by law must allow the town of Conway to be offered the property first.

A spokesman for the House Speaker Steve Shurtleff’s Office addressed Democrats’ concerns about the federal charter school funds, saying, “The $46 million grant represents money only for the expansion of or creation of charter schools. This grant could potentially double the number of children in charter schools, and in New Hampshire we fund charter schools at twice the rate of our traditional public schools. This action could leave a large hole in future budgets.”

The spokesman continued: “This grant cannot be used for currently operating charter schools. ... (and) the vote that the fiscal committee keeps taking is not for $46 million but for the first $10 million.

After visiting the charter school, Sununu was to visit Zeb’s Country Store and Horsefeather’s Restaurant in North Conway to tout a second round of the “Main Street Relief Fund.”

Sununu said the application period is still open for a few more days. He said it’s open to businesses that are expecting to receive less revenue this year as compared to last. The fund is $100 million and businesses can apply through goferr.nh.gov/apply.

“Come get the money,” Sununu said.