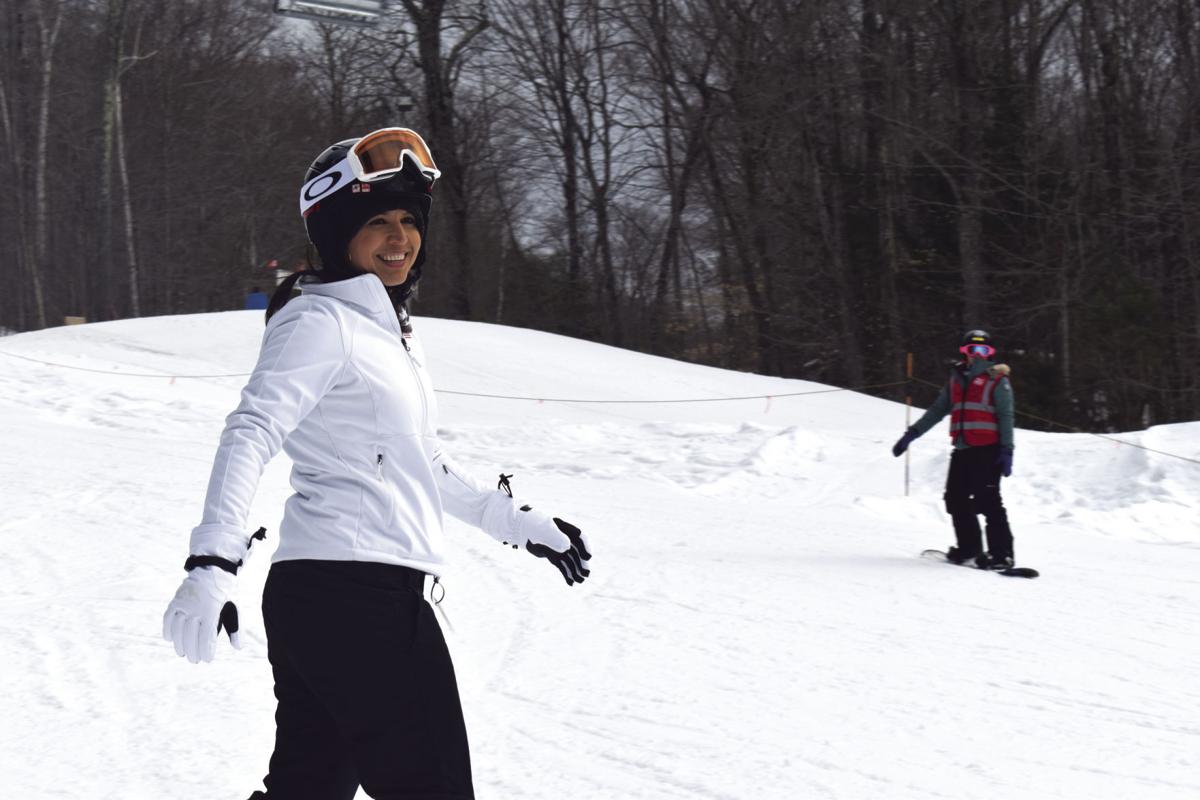 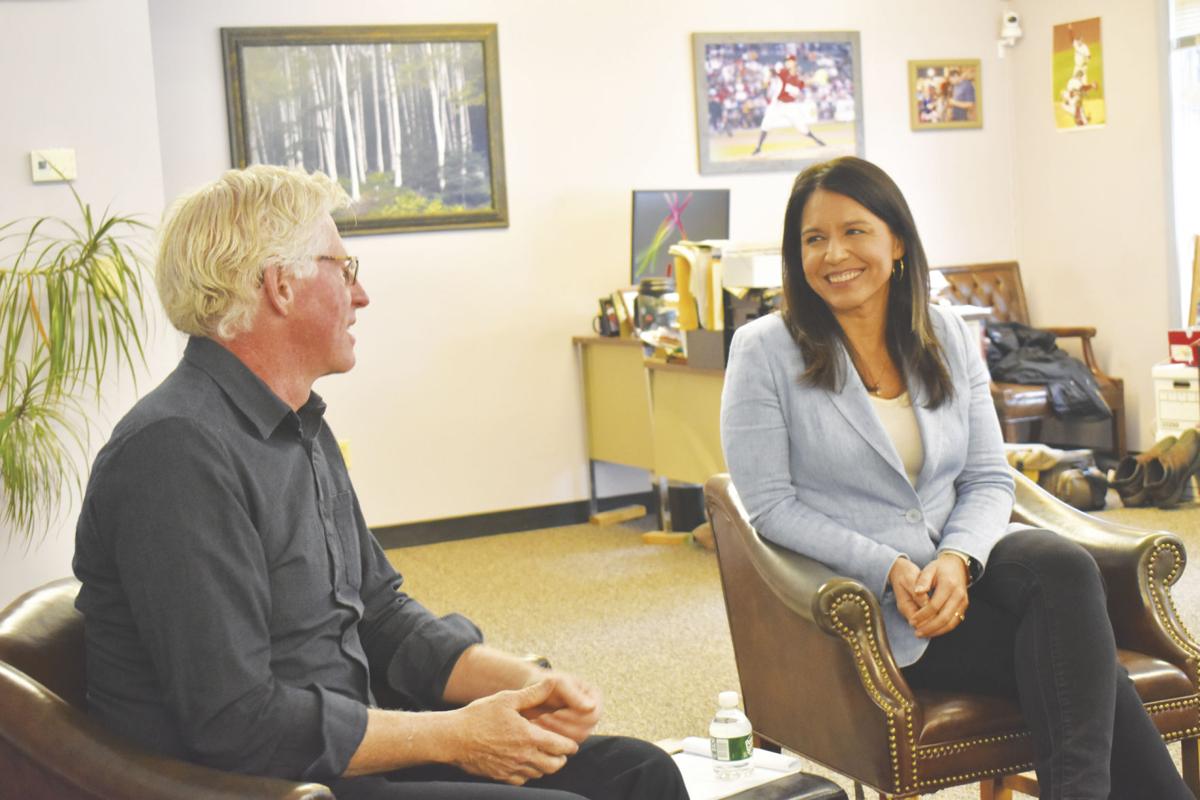 Presidential hopeful Tulsi Gabbard (D-Hawaii), takes part in an editorial board at the Sun with Publisher Mark Guerringue on Tuesday. (DAYMOND STEER PHOTO) 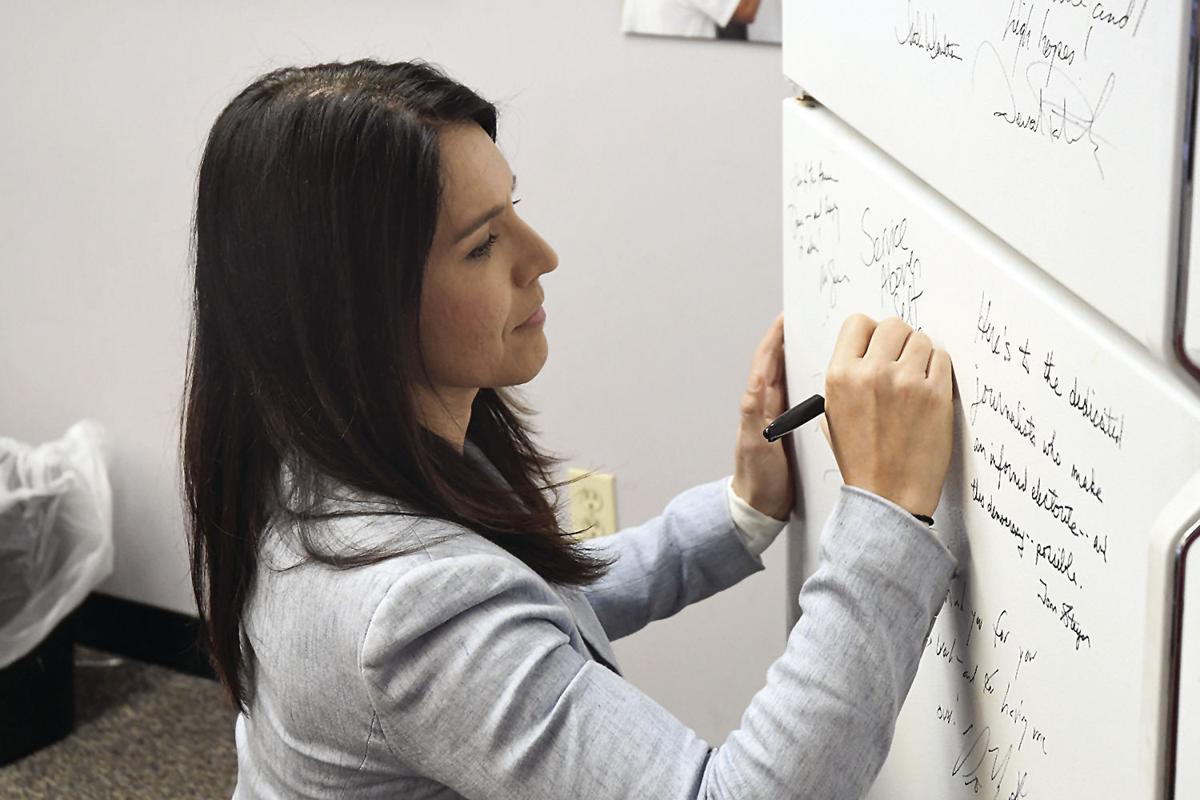 Presidential hopeful Tulsi Gabbard (D-Hawaii), signs Ice Box II following an editorial board at the Sun on Tuesday. She wrote, "Service above self." (LLOYD JONES PHOTO) 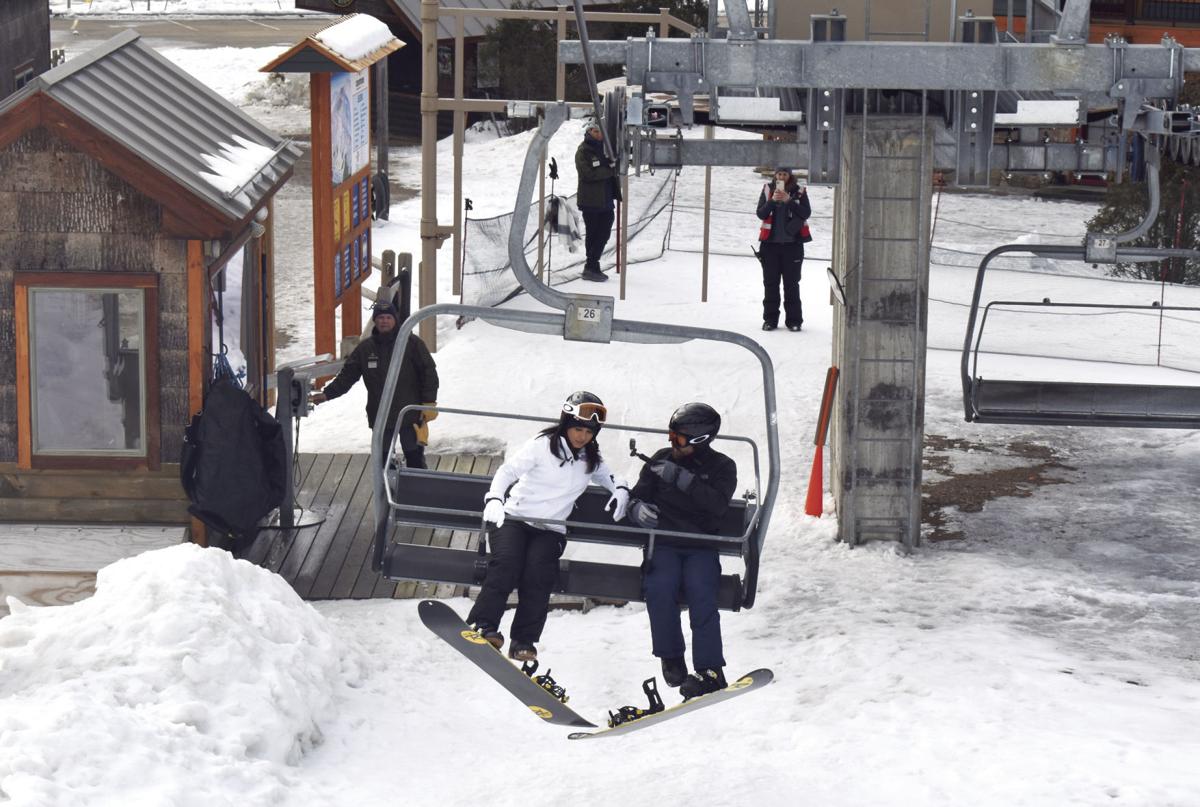 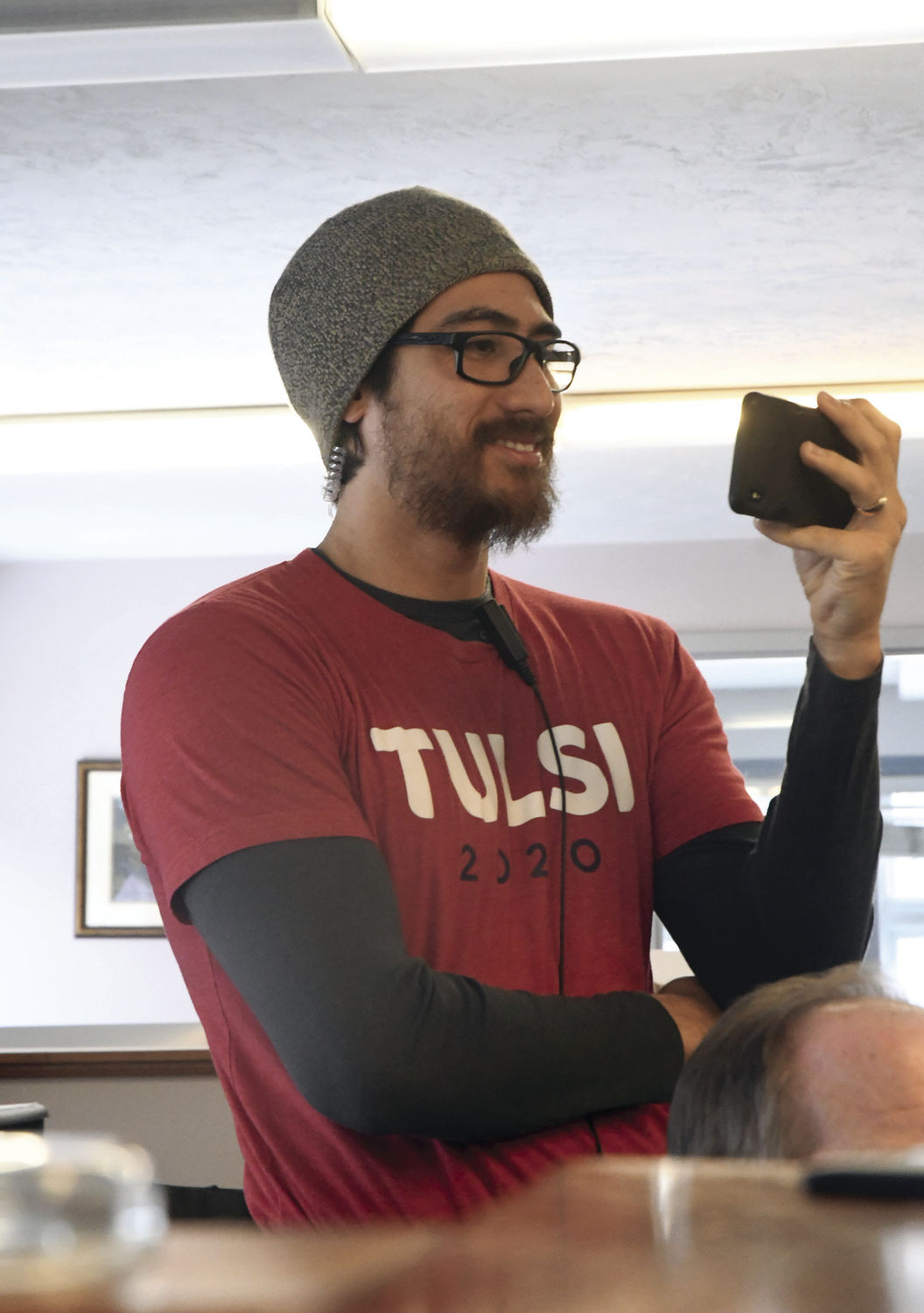 Videographer Abraham Williams, husband of presidential hopeful Tulsi Gabbard (D-Hawaii), shoots footage of his wife during an editorial board at the Sun on Tuesday. (LLOYD JONES PHOTO)

Presidential hopeful Tulsi Gabbard (D-Hawaii), takes part in an editorial board at the Sun with Publisher Mark Guerringue on Tuesday. (DAYMOND STEER PHOTO)

Presidential hopeful Tulsi Gabbard (D-Hawaii), signs Ice Box II following an editorial board at the Sun on Tuesday. She wrote, "Service above self." (LLOYD JONES PHOTO)

Videographer Abraham Williams, husband of presidential hopeful Tulsi Gabbard (D-Hawaii), shoots footage of his wife during an editorial board at the Sun on Tuesday. (LLOYD JONES PHOTO)

CONWAY — In the lead-up to the New Hampshire primary, presidential candidate Rep. Tulsi Gabbard (D-Hawaii) has made the Granite State her home away from home. Having spent 109 days in the state, which she calls “beautiful,” Gabbard was in town Tuesday, where she took the unusual step of campaigning on the ski trails of Cranmore Mountain.

Following a morning editorial board at the Sun, the 38-year-old Gabbard — who said she learned to snowboard in New Mexico while she was stationed with the Army National Guard in Texas — headed to Cranmore to hit the slopes with supporters and prepare for a town hall-style meeting at Cranmore’s Zip’s Pub that evening.

More than two dozen people signed up with the campaign to ride the lifts and ski or snowboard with Gabbard, who took a couple of practice runs on the South Slope to warm up before heading over to the quad to meet people. A group photo was planned for the end of the day.

Sun Publisher Mark Guerringue pointed out that she is viewed by many as an outsider and asked if that helps or hinders her campaign.

Gabbard said her message — a major one being that "regime-change wars have not made us any safer" — resonates with Americans attending her town halls.

“People have lost faith, largely that these institutions, whether in media or in politics, are working for them. And so they're looking for other voices that they can trust and that'll tell them the truth," she said.

Guerringue asked Gabbard what the reasoning was behind her filing a $50 million libel lawsuit against former Secretary of State Hillary Clinton following a news report that Clinton said Russia was "grooming" a female Democrat to run as a third-party candidate.

"What (Clinton) has done is basically attempt to take away the very essence of who I am,” Gabbard told Guerringue. “I took an oath of loyalty to our country, and for her to accuse me of being a Russian asset is not a small thing.”

"Why do you think she said that?” Guerringue asked. “Do you think it's somehow personal with you or that what you represent is sort of an existential threat to the establishment Democrats?”

“That's the question only she can answer,” Gabbard replied, and then said there could be two reasons. "No. 1 is I endorsed Bernie Sanders in 2016 instead of her. I was warned by a lot of people at that time who said, ‘You know, aren't you afraid of the Clintons? Aren't you worried about what the political repercussions will be?’

“Secondly, I am and have been speaking the truth about her foreign policy legacy and the legacy of war hawks and warmongers in Washington," Gabbard said.

"The cost and consequences of the decisions that they've made both of my brothers and sisters in uniform, and to every American, we are still paying the price for these, these regime-change wars that have not made us any safer — yet more and more of our taxpayer dollars are still coming out of our pockets to pay for them,” she said.

Gabbard, who served in a field medical unit of the Hawaii Army National Guard in a combat zone in Iraq from 2004-05 and was deployed to Kuwait from 2008-09, said it was the 9/11 attacks that led her to enlist in the military.

Gabbard, who is outpolling Andrew Yang, Tom Steyer and Deval Patrick in New Hampshire, is not being included in CNN’s series of eight nationally televised town halls in the Granite State to air just before the primary, while the other candidates will be. Why isn't she included? she was asked.

“That’s a great question,” she said. “I think you should call CNN and ask them about it. They won't even return our calls. They won't give us an explanation why, and these are people we've worked with throughout this entire campaign."

Yang, in a Jan. 10 editorial board, said the biggest things that surprised him over the course of his campaign was corporate media. Gabbard agreed.

“I would share his assessment that it's been, it's not even hidden, the unfair and biased treatment that some of us get in the media,” she said, mentioning that when CNBC put out a slate of candidates, they ran the wrong photos with her and Yang's capsules.

"For Andrew Yang, they had a picture of some other guy whose last name was Yang that was not Andrew, nor was he running for president. And for me, they had a picture of Sen. Kirsten Gillibrand (D-N.Y.). It blows my mind. it would be laughable if it wasn't so crazy. You know I could go on Google right now and type in my name and find 1,000 pictures of like me, not someone who doesn't look anything like me from a different part of the country.”

Gabbard responded it was to make a statement about the House's "hyperpartisanship."

But, she said, “there's no question that the president needs to be held accountable. It's why I introduced a censure resolution that was actually more expansive and more detailed in listing many of the unconstitutional actions that this president has taken while still allowing us to go and empower voters to make the decision on removing Trump from office in November.”

When a viewer on the Sun live Facebook feed asked for the candidate's views on drugs, Gabbard said that America's longstanding war on drugs has failed and said she supports ending the federal marijuana prohibition.

Asked which three people throughout history she would like to have dinner with, Gabbard selected Abraham Lincoln, the Rev. Martin Luther King Jr. and U.S. Supreme Court Justice Ruth Bader Ginsburg.

As part of another newsroom tradition — signing Ice Box Two — Gabbard wrote on the refrigerator door: “Service above self! Tulsi Gabbard 2020.”