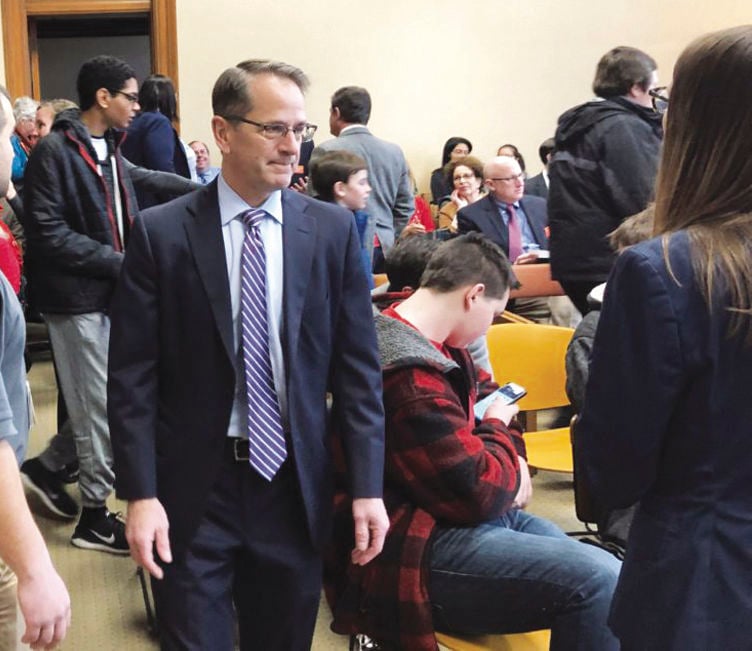 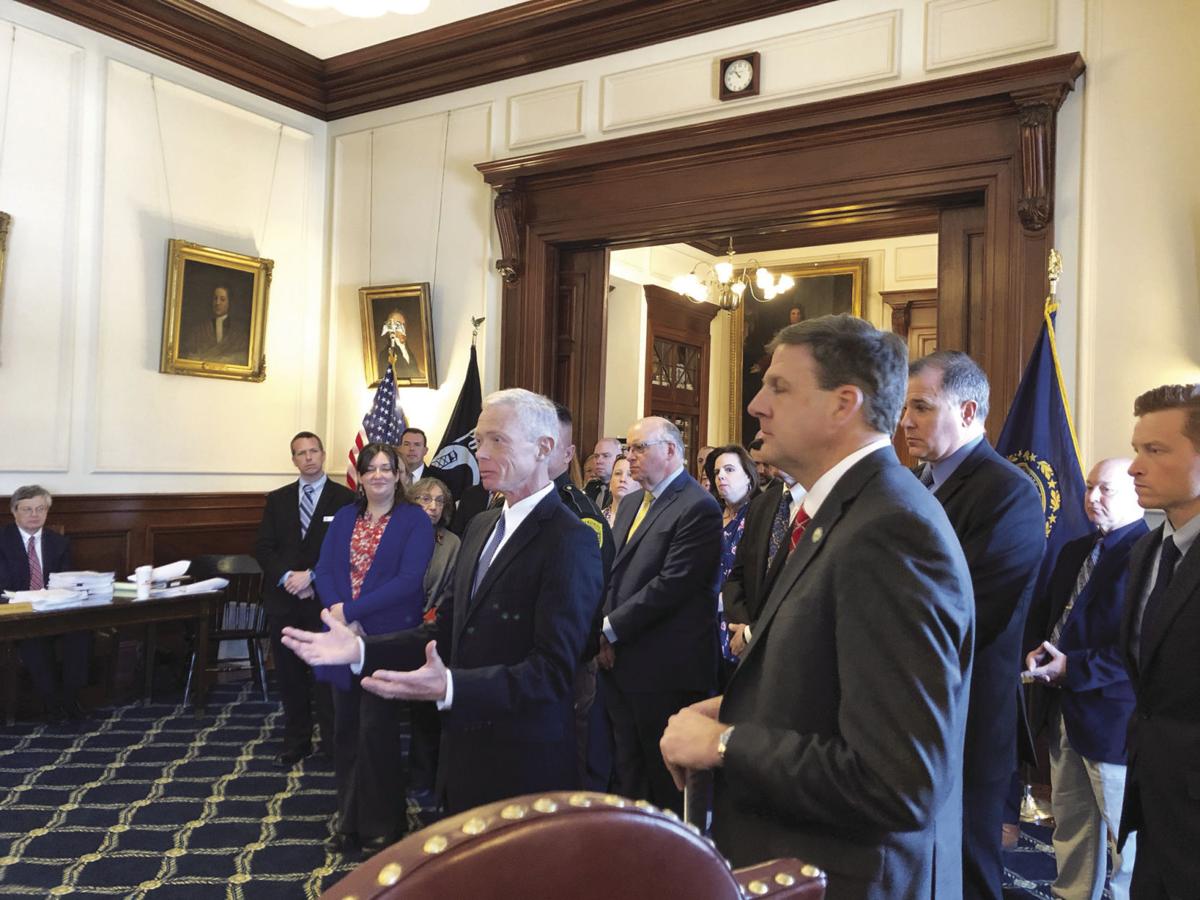 Executive Councilors Andru Volinsky of Concord, Michael Cryans of Hanover and Debora Pignatelli of Nashua, all Democrats, said after the meeting that Edelblut fails to advocate for the mission of the department, which is to support education for all children in New Hampshire.

Instead, they said he advocates for charter and private schools, which they contend takes money away from a majority of the school children in the state.

The two Republicans on the five-member board, Ted Gatsas of Manchester and Russell Prescott of Kingston supported the pay hike request.

Edleblut did not speak on the matter. He left the meeting at the council chambers at the State House immediately after the issues related to the department were voted on, including the pay matter.

There was no discussion at the table on the pay hike issue.

The pay raise request goes before the Executive Council automatically each year if a commissioner is not already at the highest pay grade. It would have increased Edelblut’s current unclassified salary grade from $109,305 to $115,661.

It was the first time this council has denied a raise to a department commissioner. Last year, it tabled raises for members of the Liquor Commission but ultimately approved them, Pignatelli observed.

Edleblut is a former state representative who ran as a Republican for governor in 2016 but lost in the primary to Sununu by only 900 votes. Edelblut then endorsed Sununu, who appointed Edelblut as education commissioner after being elected.

Recently, Edelblut stirred controversy by getting the largest federal grant, $46 million, to support the creation of new charter schools, but the legislative fiscal committee has twice denied accepting the first phase of that funding.

Pignatelli said she expects the education commissioner to be “a cheerleader for public schools.” Instead, she said, Edelblut has shown more support for charter schools, private schools and has advocated the state take millions of dollars from the federal government to support the development of new charter schools.

Volinsky, who is a Democratic candidate for governor, said in addition to not advocating for the mission of the department, Edelblut has “reneged on a promise” he made to former Executive Councilor Chris Pappas to not politicize his position.

Cryans said he would simply like Edelblut to advocate for public education. Instead, he feared the state would have to put up with “one more year.”

A large contingent from law enforcement, immigration, customs, labor and homeland security, along with crisis counselors, came to the State House to support the awareness efforts at the meeting.

They learned that between 2013 and 2018 there were 72 sex trafficking cases investigated in the state and 21 labor cases and officials said the problem seems to be growing.

Sununu said the message to the public should be, “If you see something, say something” and that people “really have to be able to stand up and take the reins,” as these victims are in many cases helpless.

This crime uses force, fraud and coercion to force some of the most vulnerable individuals — children and women — for sex trafficking and human labor trafficking, said Lynda Ruel, director of the Attorney General’s Victim/Witness Assistance Unit.

Victims often stop attending school and work, show fear and a change of behavior that should be a concern, she said.

Sununu said the state has “set the standard” for how agencies can work together on these matters and suggested that the more than two dozen professionals gathered “take a bow” for exceptional leadership on combating human trafficking.

The federal grant was unanimously approved. It will allow State Police, in participation with the Human Trafficking Collaborative Task Force, to assign a part-time trooper to work 25 hours each week focusing solely on proactive labor and sex trafficking investigations.

Volinsky asked Commissioner Edleblut about concern for children being pulled out of school, perhaps to be used for sex trafficking instead of being home-schooled.

Edleblut responded that he has not seen a heightened number of queries on this, but it might be best for his office to coordinate with the state Division for Children, Youth and Families.

He said there is a normal procedure following a complaint to identify a truancy issue under state law.

Concerns about nutrition in public schools were raised at the meeting by Pignatelli who said new rules from the Trump Administration would allow the reduction of vegetables on school lunch plates and “a license to sell more pizza, burgers and fries” and other foods that are not as nutritional.

“How are you going to approach these rules and is there any way you can apply for a waiver?” Pignatelli asked.

Edelblut said he believes the new rules are the floor and not the ceiling on what can be offered in schools and noted that the decision is a local one.

The commissioner said he has spent significant time with school service professionals across the state and feels confident that they will focus on the healthy options “so that students are fueled for learning.”

“Simply because the federal government lowers the bar does not mean that our food service professionals are going to go there,” Edelblut said.

There are many creative measures in schools from farm-to-table weeks, growing food in schools and there is a robust “68-hour” program to provide food for the children over the weekends who are food insecure.

Pignatelli asked, “So how likely are you to not abide by those new rules?”

Edelblut responded: “Certainly we will abide by federal laws but by doing that does not mean we have to lower the bar.

“What I am saying is the department does not make a decision on what a local school decides … we encourage them to do everything they can to bring brain-building foods to the schools every day.”

Pignatelli said she expects Edelblut to protect children against “those who don’t feel or have our children’s best interests at heart.”

Lori Shibinette of Northfield was unanimously confirmed as commissioner for the Department of Health and Human Services and will receive a salary of $143,704 a year.

Councilor Cryans called it the “most challenging job in state government.”

Shibinette replaces Jeffrey Meyers, who resigned at the end of last year to pursue work outside state government.

A registered nurse, Shibinette leaves the position of chief executive officer of New Hampshire Hospital. Previously, she served as deputy commissioner at the Department of Health and Human Services.

Prior to state service, she served as the chief executive officer of the Merrimack County Nursing Home and before that as its director of clinical services.

Volinsky, who chaired Shibinette’s nomination hearing, said he found her willing to advocate for all the vulnerable populations that the department serves.

“The only concern I have is she is going to take a significant pay cut,” Volinsky said.

“I hope that the situation for the children in our state improves,” Pignatelli said.

Cryans said when he was a Grafton County Commissioner, they would rely on Shibinette’s expertise in nursing homes.

“I am sure she will do a good job,” Cryans said. He also thanked Kerrin Rounds for serving as interim commissioner.

Sununu said the state had some great candidates for the job.

“It was a really good process,” Sununu said.

The council also confirmed Mitchel Weinberg of Edmonton, Alberta, to be the deputy chief medical examiner at a salary of $240,000 a year and will begin Jan. 28.

Michael Todd of Concord, who has been a public information officer for emergency management, was also confirmed to the position of deputy commissioner of the state Division of Motor Vehicles at a salary of $103,059.

The governor also told the Executive Council he is nominating Christopher Nicolopoulos of Bow to be the new commissioner of the Department of Insurance at a salary of $118,707.