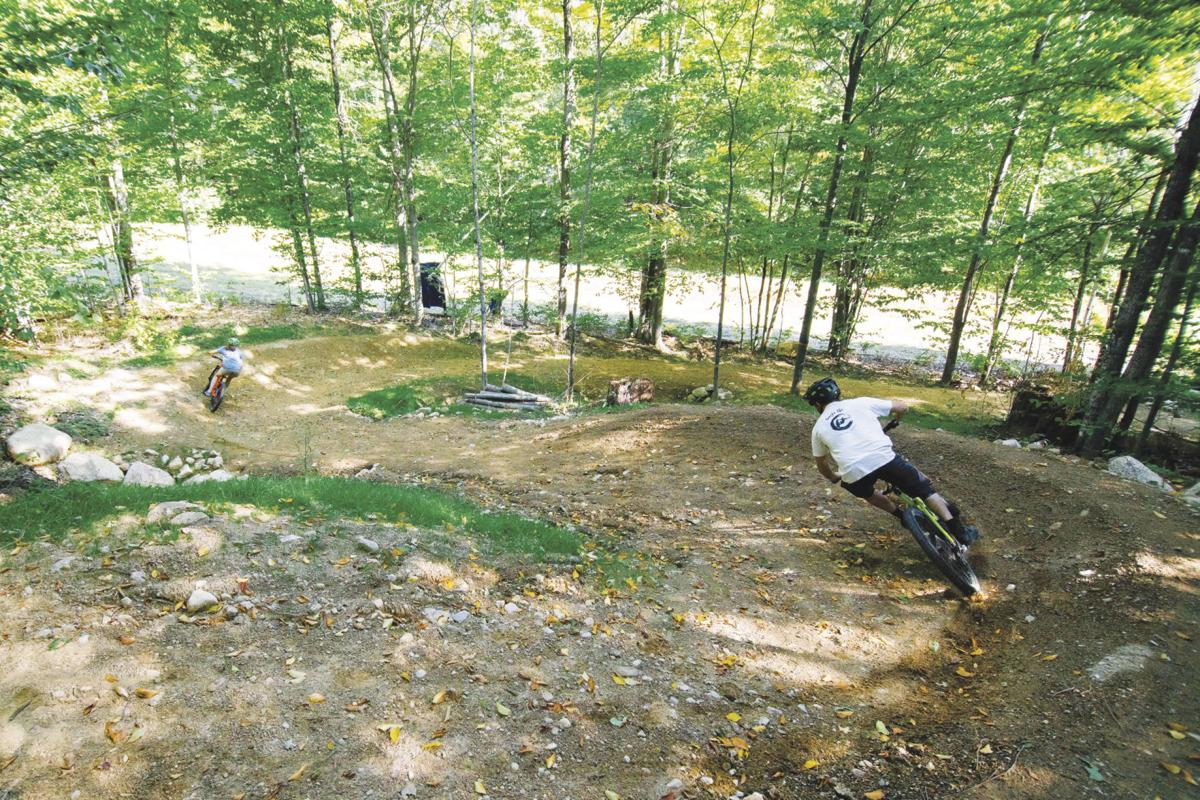 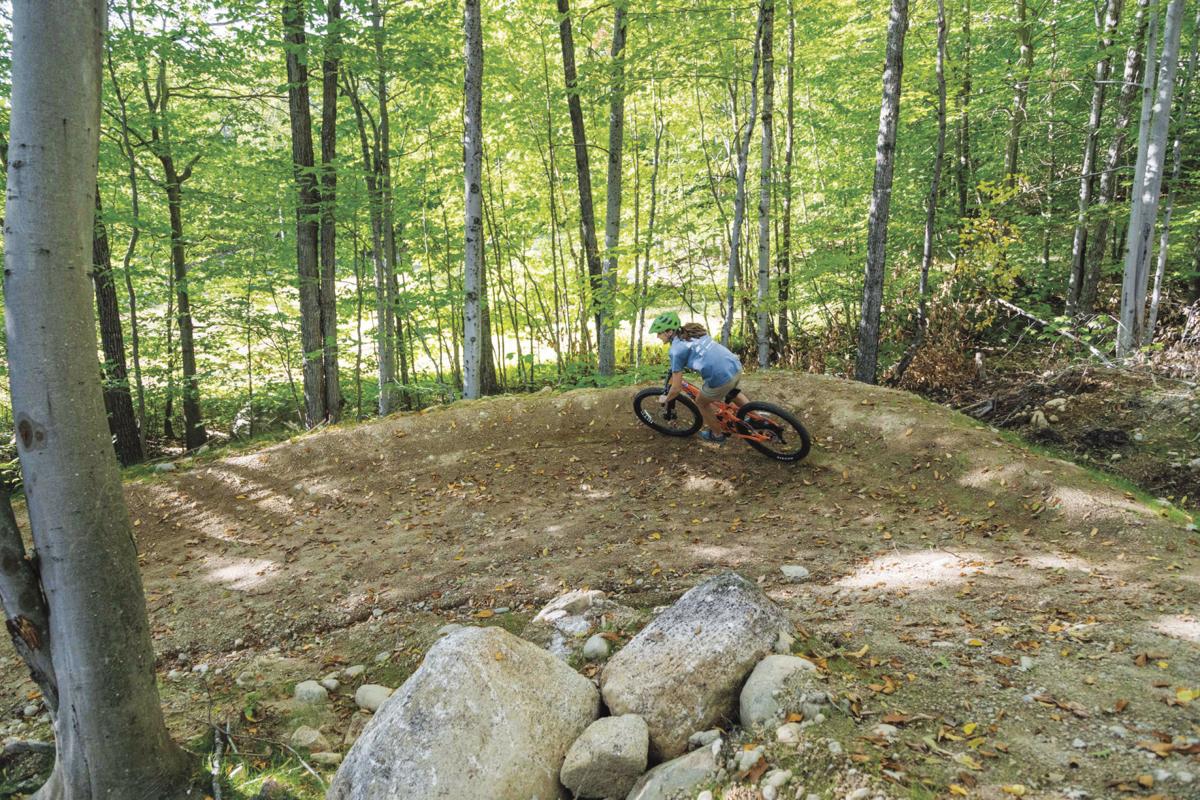 There are plenty of twists and turns along the way at Cranmore. (COURTESY CRANMORE MOUNTAIN RESORT) 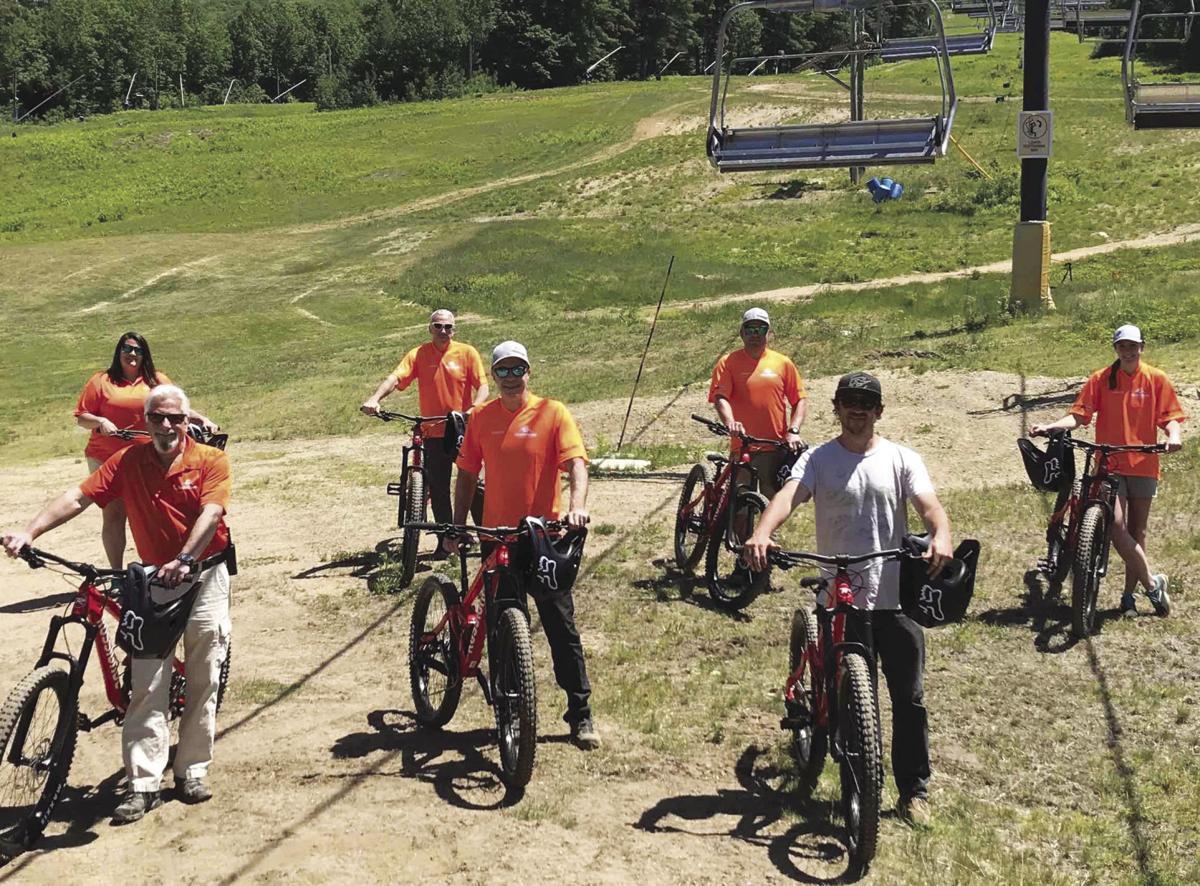 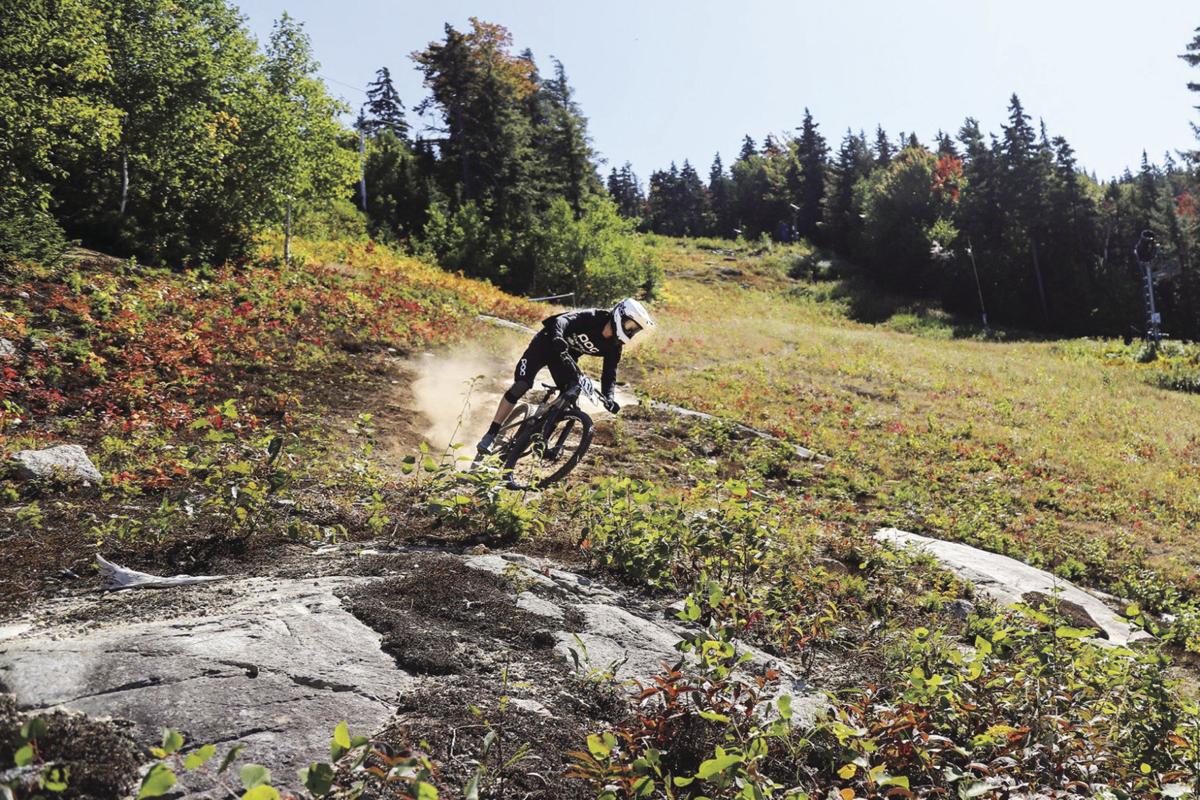 A rider takes part in a past Attitash Megabowl Race Series. This year’s Megabowl is canceled, but lift-served biking could go online by late summer. (ATTITASH SKI AREA FACEBOOK PHOTO) 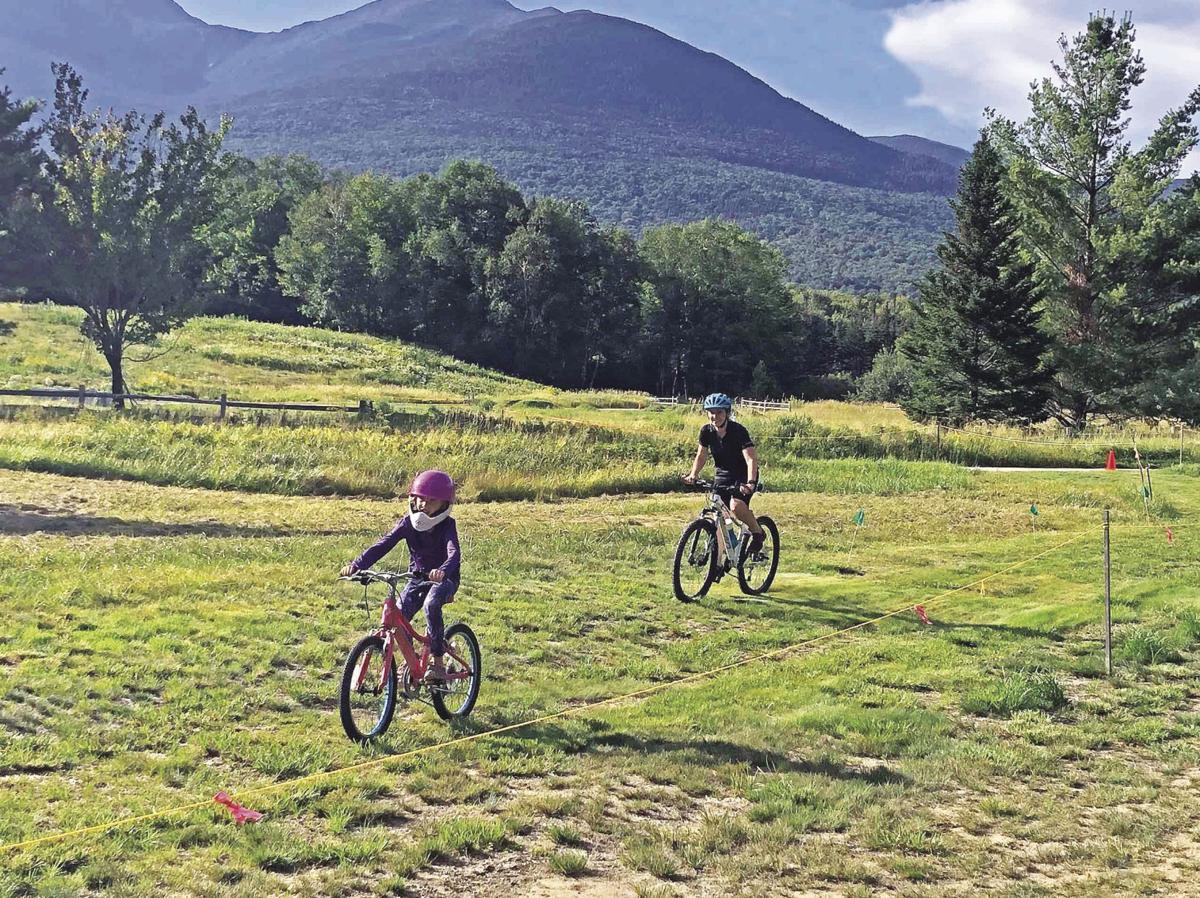 There are plenty of twists and turns along the way at Cranmore. (COURTESY CRANMORE MOUNTAIN RESORT)

A rider takes part in a past Attitash Megabowl Race Series. This year’s Megabowl is canceled, but lift-served biking could go online by late summer. (ATTITASH SKI AREA FACEBOOK PHOTO)

CONWAY — Rolling-downhill adventure seekers looking for an adrenaline high have another outlet with the opening today of a new lift-serviced bike park in North Conway.

The family-focused Cranmore Bike Park uses its South Quad lift to transport downhill mountain bikers to a trio of machine-built trails serving up a variety of terrain geared toward beginner and intermediate riders while offering alpine views, including Mount Washington.

“It’s nice to have a year-round business where every season is a passion sport,” said Cranmore President and General Manager Ben Wilcox during a recent interview on the Zip’s Pub deck at the mountain’s base.

The bike park adds to the valley’s lift-serviced downhill mountain bike scene — one that includes Attitash and Bretton Woods during a season that will also see the White Mountains chapter of the New England Mountain Bike Association oversee several miles of new mountain biking trails around North Conway, including some by Cranmore.

The Cranmore Bike Park, with its 500-foot vertical drop, is highlighted by 5 miles of beginner-to-intermediate flow trails designed as steppingstones for downhill newbies and thrill rides for more experienced riders, turning as it does the South Slope’s dirt brown patches into rolling mountain pathways through verdant green grasses and woods.

The Learning Curve is the most benign of the trails, and the first one that novices will explore.

A Day at the Beech, which goes though Beech Glade, is a step above that one followed by the intermediate-rated The Stembogen, which meanders through the old Stembogen Glade.

The skills park contains elements such as berms, rollers and small drops, all features encountered during downhill mountain biking.

“The skills park is basically a condensed version of everything they will find on the trails,” said dirt sports supervisor Melissa Linne.

“It can be intimidating to first get on a lift with a bike. They’ll go over to the skills park, test it out, get a feel for what it’s about, and get comfortable before going to the lift.”

In the spirit of social distancing, lessons are limited to no more than four people. Family and friends will be grouped together. Riders must be at least 8 years old to take a lesson.

Admission to the bike park is in full- or half-day blocks with a limited number of tickets sold for each session as a safety precautions due to the COVID-19 pandemic. There is a skills park-only pass and a finite number of bike park season passes. People are encouraged to purchase their tickets and do their bike rentals online. Park pass holders are encouraged to reserve their time.

At the resort, one party member may enter the main ticket office to collect tickets. Face coverings must be worn in any building and while waiting to load and unload the chairlift.

Instructors are preparing for lessons focusing mostly on families, according to Linne. Guests will be outfitted with rental equipment and taken through the basics of how the bike works. At the skills park, they’ll learn about proper riding stance, braking and techniques.

“Then we’ll take them to the lift, teach them how to load the bike and then take them down to put it all together,” she said.

The addition of the park means the winter rental shop is transformed into the Crank Bike and Repair Shop.

Although they’re not selling bikes, the shop’s rental fleet allows folks to ride high-end bikes before deciding if they like the sport.

The park’s opening culminates a decades-long vision that started with Wilcox in the 1990s when he worked in the marketing department at Bretton Woods when that resort debuted lift-serviced mountain biking.

Wilcox admits DH (downhill) mountain biking during that time was somewhat haphazardly put together, but times and technologies have changed, and parks are now built by professionals.

Instead of building big, Cranmore’s starting small. They’ll monitor park usage and figure out the future. Given the pandemic, large-scale events are curtailed. But future events and more trails are definitely doable.

Construction started with the skills park last May, and last week, Lewando was putting the finishing touches on The Stembogen.

Lewando grew up mountain-biking in the valley and has helped build parks at Vermont’s Killington and Suicide Six.

He and his teenage buddies used to cut bootleg trails at Cranmore.

“Now I’m getting paid to do it professionally,” the 30-something Lewando said with a laugh. Helping Lewando at Cranmore was his friend Corbett Tulip of Tulip Trails.

With the bike park, Cranmore is poised to be a North Conway mountain biking gateway given its proximity to several established mountain bike trails and the planned Mount Washington Valley Recreation Path.

Mountain bikers on some of those trails can access the summit Meister Hut for a European flavor as it is serving up beer, ice cream and snacks this summer.

Cranmore’s bike park is currently the only lift-serviced option in the valley as the pandemic has impacted opening dates for downhill biking at Attitash and Bretton Woods.

There is no downhill biking at Attitash, but guests can mountain bike on its cross-country trails along the Saco River. This year's Megabowl series is canceled, but the possibility remains that lift-served biking could go online late summer or early fall.

According to Vail’s Eastern Communications Manager Jamie Storrs, mountain bikers can use the Thorne Pond Trail System for free, but they are on their own and should call 911 in an emergency. The trails aren’t currently patrolled or maintained.

“Guests are allowed to mountain bike, but we ask that visitors observe all posted signs and closures, and continue to be responsible and respectful of social distancing requirements when enjoying the trails,” he said.

While an opening date has yet to be announced for lift-serviced downhill mountain biking at Bretton Woods, the resort’s fee-based cross-country network opened June 16.

Rentals and trail passes for cross-country biking are accessed from the Stone Pillar Lodge in front of the hotel.

“At this point, we are not doing anything over on the mountain side until we get a little bit more settled in,” said Omni Marketing Director Craig Clemmer. He suggests riders try a 6-mile loop that includes trails like Sebosis, Bridle Path and B&M Trail.

Though no bike events are planned for now, the Omni Mount Washington Resort plans to have Fourth of July fireworks.

Currently, Great Glen is renting bikes trailside so customers don’t have to enter the base lodge. Online reservations are encouraged. All bikes and helmets are sanitized after every use.

Battles added that anyone who registered for the cancelled, sold-out, 24 Hours of Great Glen race will have their spots deferred to the 2021 race.

Also partnering with IdeRide Trail Builders of Vermont, Tyrol Trails and Tulip Trails, plans call for a handful of cross-country and gravity trails to be built. They’re also working with the Conway Conservation Commission, the town and funding sources on plans for more.

According to chapter president Chris McKay the chapter hopes to break ground by July 15 on two trails that will connect the Cranmore parking area to the water tower on Hurricane Mountain Road.

“These are important infrastructure trails 1) to have a route to access Hurricane Mountain without relying on public and private roadways; and 2) to reduce congestion at the Water Tower parking lot on Hurricane Mountain Road,” he said in an email.

“We are working with multiple land owners on the final layout and land access concerns, (and) I hope to have a final layout available soon.”

Another project is planned to begin around Aug. 1 and wrap up by Sept. 15.

Built by IdeRide Trail Builders (Knight Ide) from Vermont, this trail will loosely parallel the Cranmore Trail from the Black Cap Trail to Charlie Don’t Surf.

McKay suggests that in order to reduce traffic at smaller trailheads around North Conway, mountain bikers park at Cranmore and the parking area on Hemlock Lane near Walmart to ride the eastern trail network.

“I can’t stress enough that all mountain bikers are ambassadors to the sport, and as such, it is important to be considerate of other trail users, land owners, and any and all members of the community, both on and off your bike,” he said.

So, there is plenty to dig about mountain biking in the dirt this summer.

Marty Basch is the Sun’s bicycle and ski columnist.