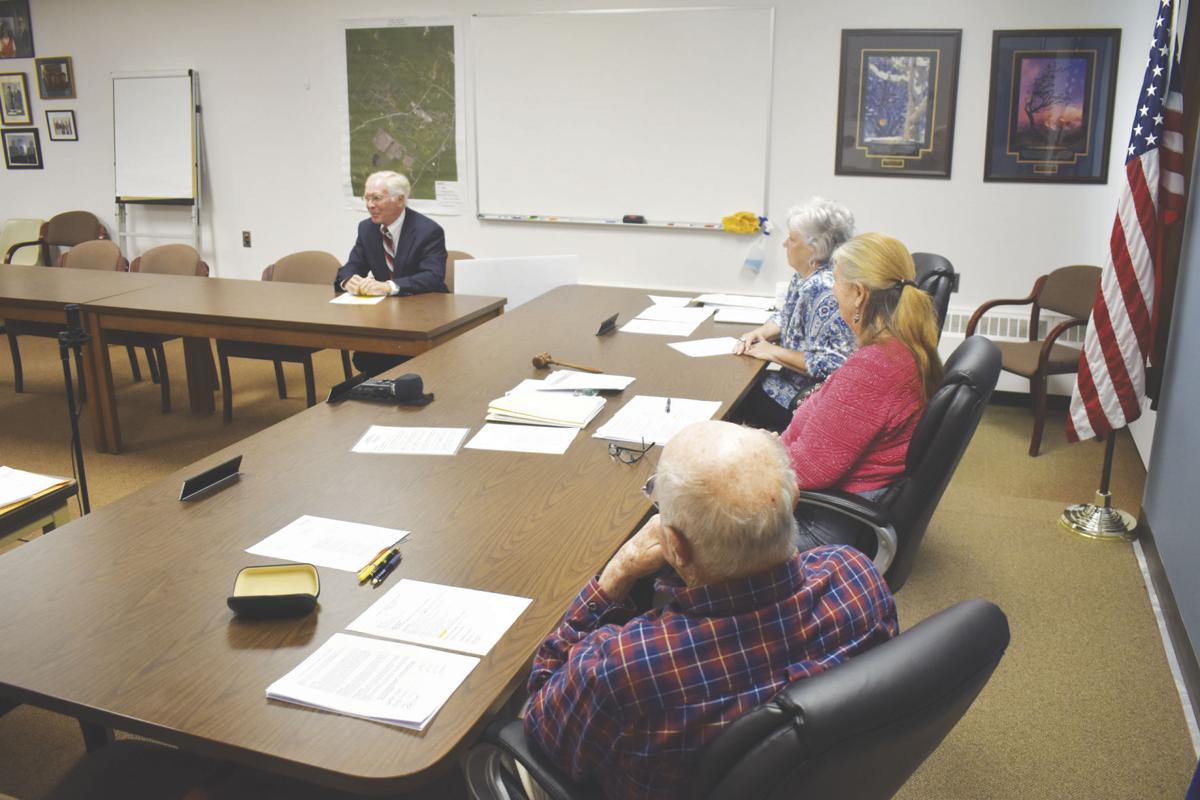 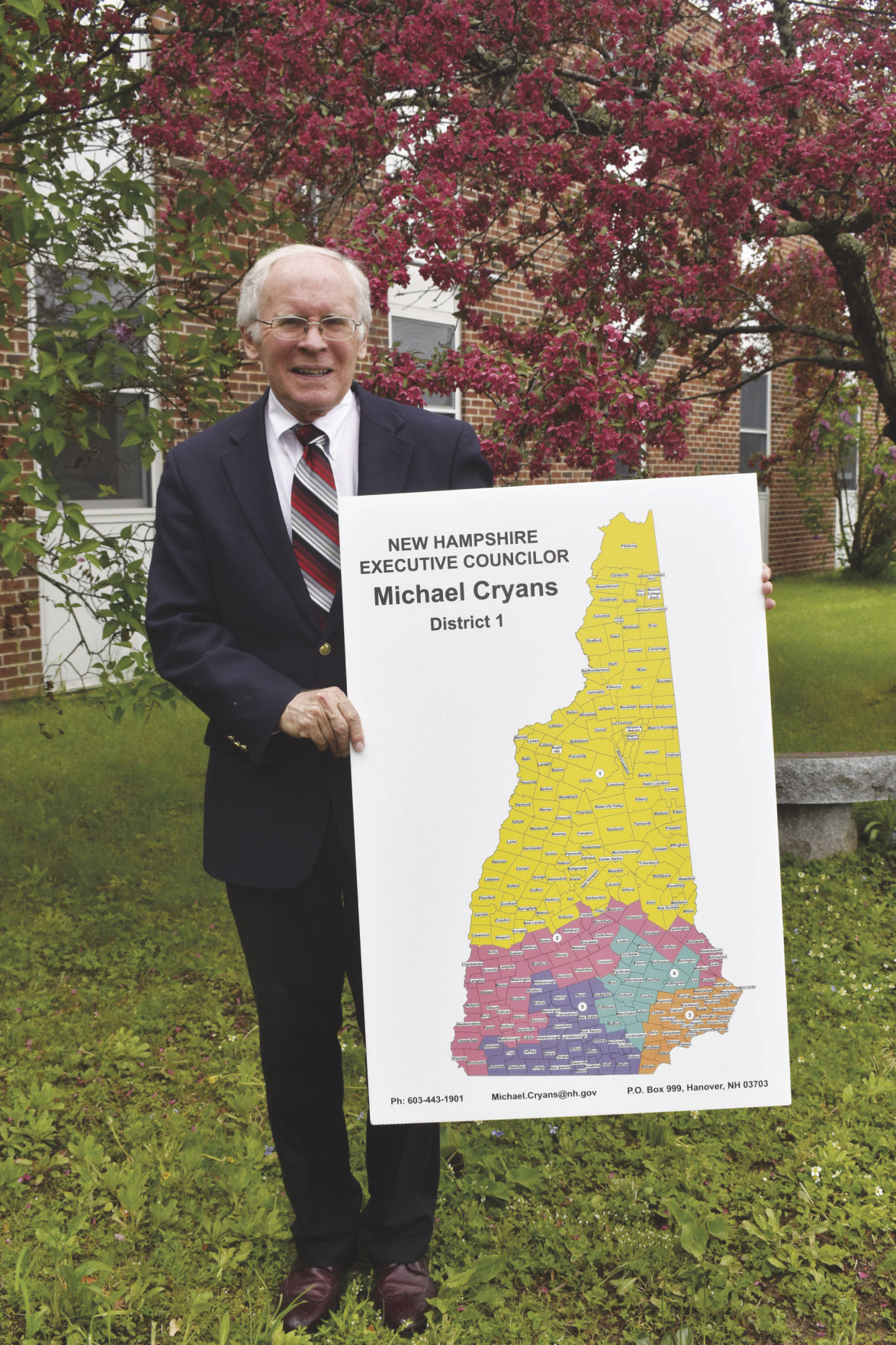 Executive Councilor Mike Cryans stands outside the Carroll County Complex Wednesday after meeting with Commissioners. He is holding a map of New Hampshire and the yellow portion is his district. (DAYMOND STEER PHOTO)

Executive Councilor Mike Cryans stands outside the Carroll County Complex Wednesday after meeting with Commissioners. He is holding a map of New Hampshire and the yellow portion is his district. (DAYMOND STEER PHOTO)

Cryans (D-Hanover) defeated incumbent Joe Kenney (R-Wakefield) in the November election, 58,066-53,956. It was the fourth attempt for him in trying to beat Kenney. He took office Jan. 3.

There are five executive councilors in New Hampshire. Their duties include approving contracts, being watchdogs over state spending, and confirming judges and state commissioners. They are elected every two years. The other executive councilors are Andru Volinsky (D-Concord), Russell Prescott (R-Kingston), Ted Gatsas (R-Manchester) and Deborah Pignatelli (D-Nashua).

Cryans explained that has already been to the district’s 109 towns and now he was coming to the counties in his district.

Prior to Wednesday he’d been to Coos, Grafton and Sullivan counties and he still needed to go to Belknap, Merrimack and Strafford.

Cryans asked Carroll County officials Wednesday if there was anything he could do for them.

County Administrator Ken Robichaud responded: “Sir, we seem to have an issue in the county here — when we get grants, we get like $10,000, $15,000. It seems like the northern two-thirds (of the state) always gets left out of those grants. Or we get what we call ‘crumbs’ or morsels.”

One such case was in 2018, when the county received a $15,000 anti-drug grant that was supposed to be split among all the police agencies in the county. At the time, then-Commissioner Mark Hounsell stated: “I’m tired of the state government treating Carroll County like a Third World country.”

Cryans replied to Robichaud on Wednesday by saying Carroll County officials should let him know if there’s a grant that they want.

Cryans said one Sunday afternoon not long after he took office he received a phone call from a constituent whose house was imperiled by an icy and flooding river.

“I said, ‘I don’t know what I can do for you, but I know who I can call,’” said Cryans, adding he called Department of Transportation Commissioner Victoria Sheehan and state Homeland Security Director Perry Plummer. “Both of them in seconds got right back to me, and they responded.”

Then he quoted the late Ray Burton, who held the District 1 seat for decades: “‘Everyone deserves an answer. You might not like the answer you’re going to get but everybody deserves and answer.”

Cryans said he puts out updates over email about what he and the council members are doing. Anybody can subscribe by sending an email to meagan.rose@nh.gov.

Cryans said constituent service is a big part of his job, and he feels it’s important. He then gave his contact information to the county officials at the table, including the commissioners and treasurer Joe Costello.

Commissioner’s chair Amanda Bevard (R-Wolfeboro) told Cryans that a number of towns in the county are trying create access to high-speed internet. She added that state officials in Concord seem to be working on the issue.

“If you can just remember that we are all up here and would like to be connected, I think that would be a big piece,” said Bevard.

Cryans replied that numerous people from his district told him they want better internet service, whether for their children who need it for homework or because they want to start a business.

“It’s an issue that comes up a lot,” said Cryans. “It’s going to take a lot of concerted effort.”

Outside in the hall, Rep. Ed Comeau (R-Brookfield) told Cryans that the free market is in the process of addressing the broadband issue. He said SpaceX just launched 60 satellites for its Starlink program that will eventually provide global broadband access with 12,000 satellites.

“I don’t know if we should be spending so much effort trying to lobby the federal government for grants to put broadband all over the place when the market could fix this,” Comeau.

Cryans said he is willing to look at any option when it comes to providing broadband.

“Obviously, there are lot of people in towns that are very interested in different forms of trying to get internet into their areas,” said Cryans.

For more information about the council, go to nh.gov/council.