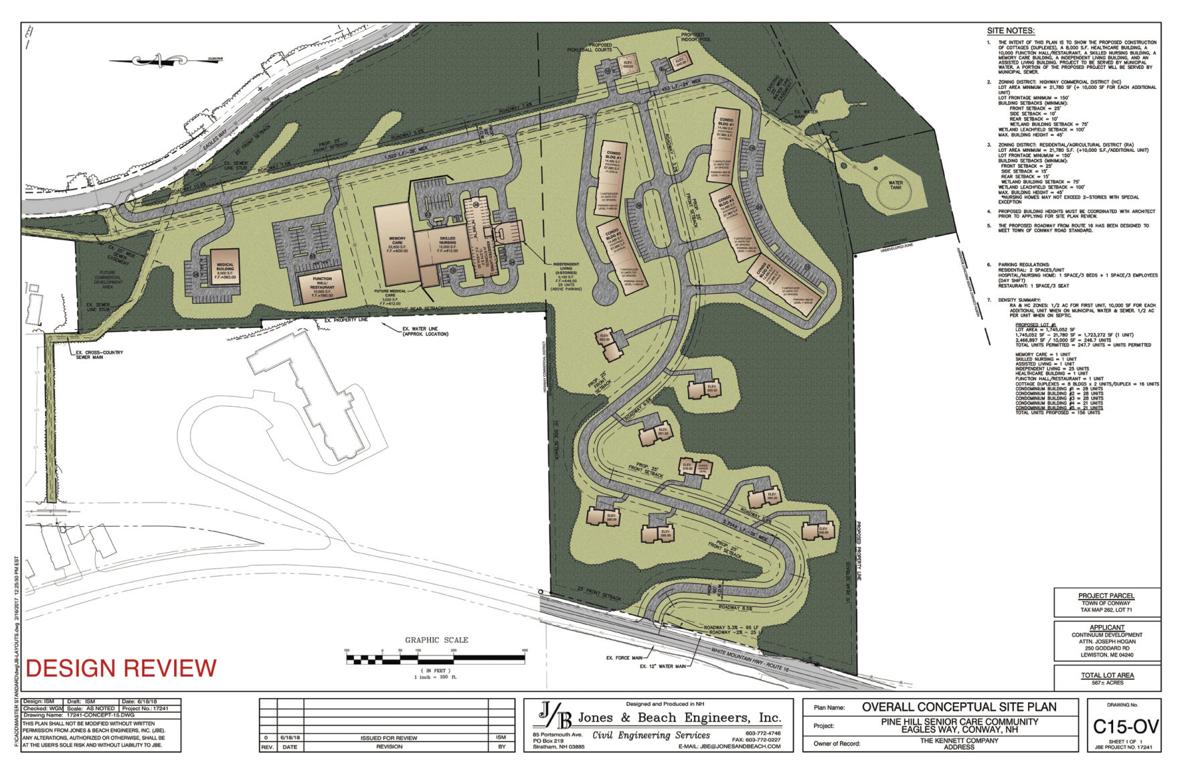 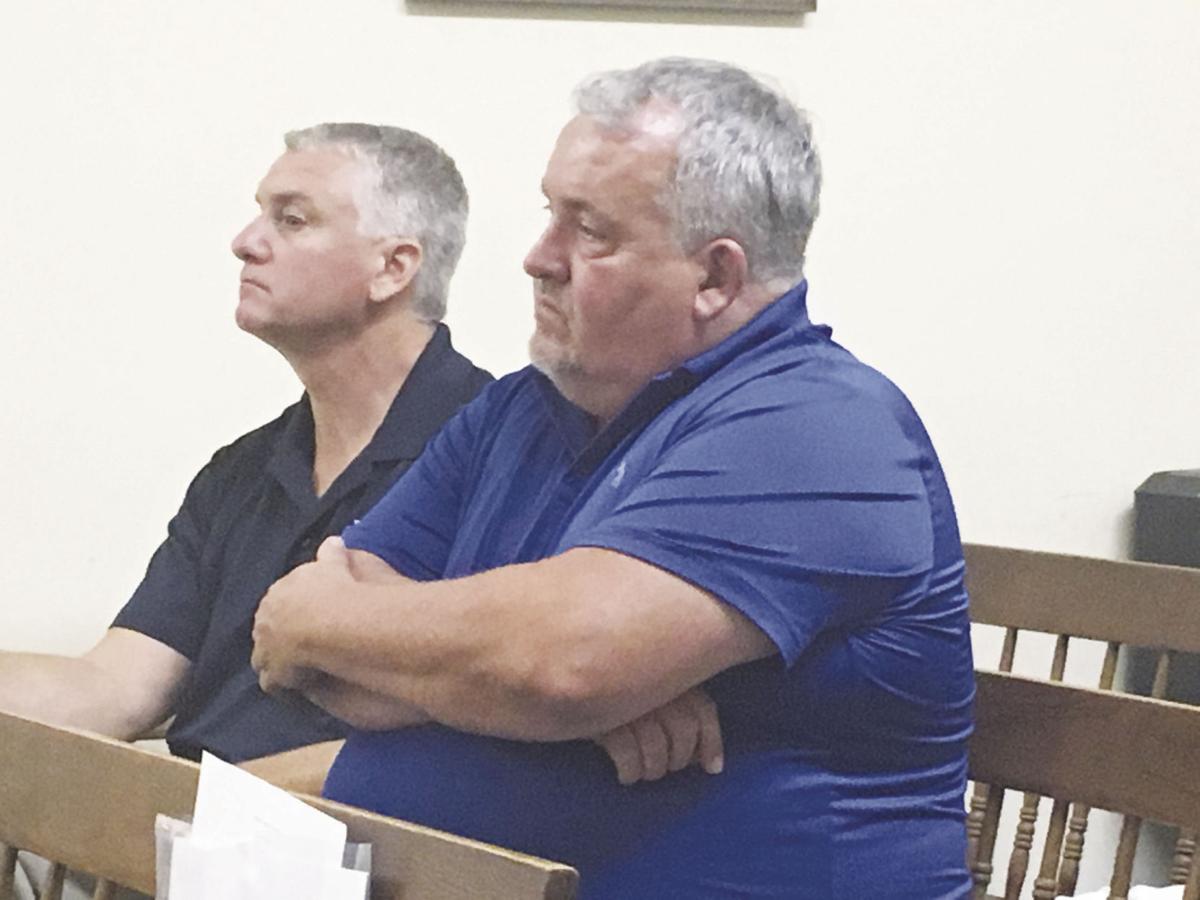 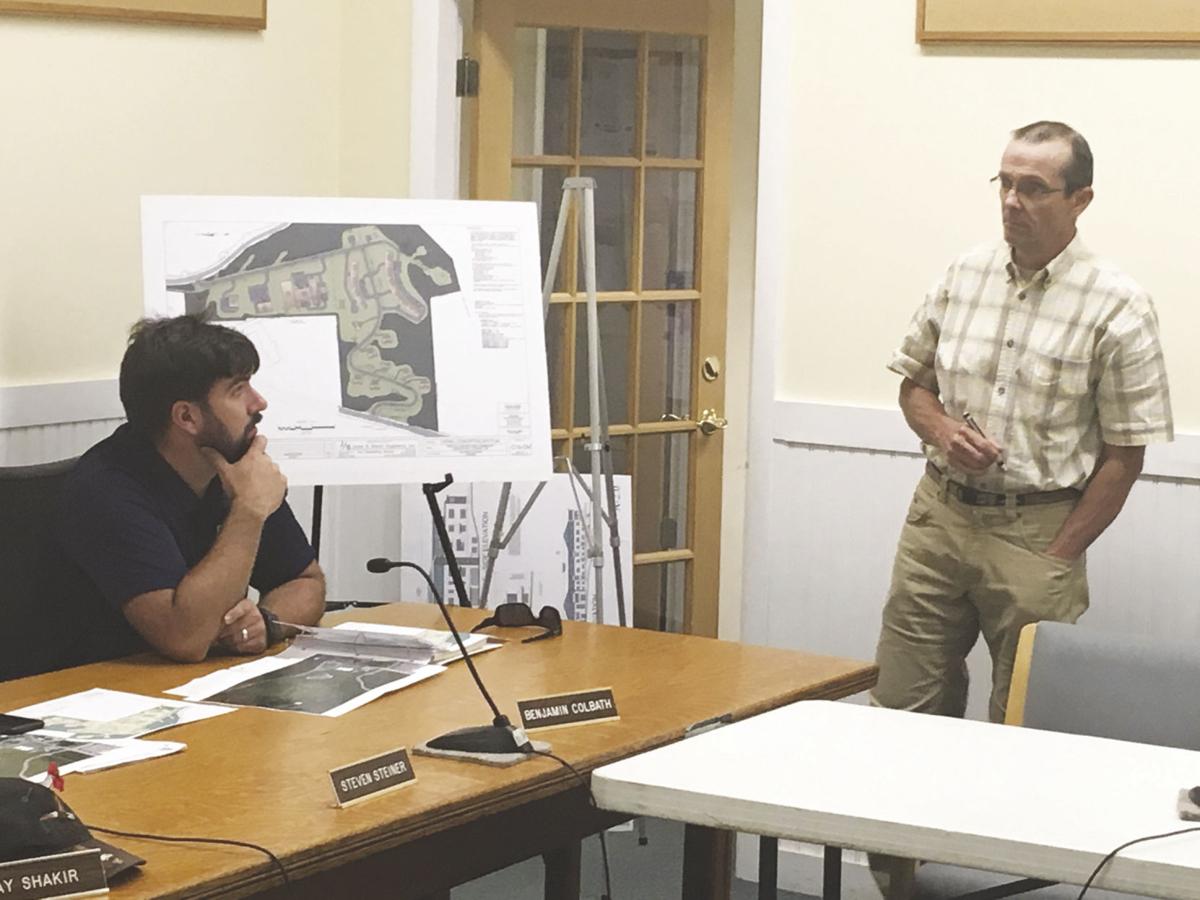 Shawn Bergeron (right) of Bergeron Technical Services of Conway, presents plans for a retirement community off Eagles Way in North Conway to the Conway Planning Board, including Ben Colbath (left) on Aug. 9. (TOM EASTMAN PHOTO)

Shawn Bergeron (right) of Bergeron Technical Services of Conway, presents plans for a retirement community off Eagles Way in North Conway to the Conway Planning Board, including Ben Colbath (left) on Aug. 9. (TOM EASTMAN PHOTO)

CONWAY — Plans were unveiled to the Conway Planning Board last week for a large senior residential project on a 56-acre parcel off Eagles Way near Kennett High.

The Kennett Co. owns the land, and Continuum Development of Lewiston, Maine, would develop the Pine Hill Senior Care Community. If all goes well, Continuum would purchase the site.

Board members were generally receptive to the proposal, saying it would help to fill a local need for elderly care and housing, though some balked at the idea of exceeding local height regulations for five proposed condominium buildings.

The complex would include a medical building; 155-seat function hall/restaurant; a building for memory care, skilled nursing, assisted living and independent living; five four-story condominium buildings consisting of 105 units mostly reserved for those aged 55 and older; indoor pool and outdoor pickleball courts; and eight duplex condos, for a total of 16 units that would not be age-restricted.

“This is a design review, and any wisdom or comments you would like to throw our way, now is the time,” said Shawn Bergeron of Bergeron Technical Services of Conway, on behalf of the Kennett Co and Continuum.

Continuum has developed four retirement communities in Maine and is working on a fifth in New London.

Going north to south, Bergeron said the first building would be the single-story, 8,000-foot medical building. Next would be the 10,000-square-foot restaurant and function hall (the restaurant would be open to the public).

Each of the five condominium structures would measure 14,490 square feet.

As a way to reduce the amount of asphalt parking, Bergeron floated the idea of putting parking under the structures. The downside would be it would raise the height of the buildings.

The town currently has a 45-foot limit on building height.

Bergeron said he would prefer to work with the planning board to resolve the issue, or, if that failed, work to get a variance from the zoning board of adjustment.

That drew a response from selectmen’s representative Steve Porter, who said: “Height is an issue. As much as I think this is a very good idea and much needed, for me, a very big concern is the visual aesthetics to the valley.

Porter said he recognizes that the valley is getting older, with an average age in the 50s and that the need for elderly housing and care is going to grow as the Baby Boomer generation ages.

But, he said, "I would not be in favor architecturally of going over what we have in place (for building height guidelines) due to the impact it could have down the road on our vacation industry (in terms of being able to see buildings rising above the trees)."

“As you drive across town through the valley, I could care less about seeing the parking, but if you could see taller buildings, preserving the aesthetics is something I would like to see,” said Colbath.

Board member Ray Shakir, however, supported putting parking under the buildings.

“I don’t have a problem with the height," said Shakir,, who was in the construction trade in New York prior to moving to Conway.

"If the trade-off is to put parking under these buildings so that it creates a height situation, I personally would rather see a taller building with less asphalt than to see shorter buildings with parking all around them,” said Shakir.

But Porter countered that "as you drive south on Route 16, you would see these buildings. I understand the economics of it,” he said, “but still we are in unique situation here in the valley — we’re not living in Manhattan or Salem or Rochester: Our livelihood is dependent on scenic aesthetics, and if you allow buildings to get above treeline you will lose the magic all of a sudden.

"We have people come here for the aesthetics, so we as the planning board have to be unique in our thought process for down the road.”

Colbath and board member Sarah Verney asked why the proposal did not include affordable housing for younger residents.

Black said the Conway project could employ as many as 200 people, adding that his company is holding discussions with the Kennett Co. concerning other parcels for possible workforce rental housing.

“We are discussing workforce housing with Bayard (Kennett) for a different parcel of land,” Black said.

In a follow-up interview, Kennett confirmed he and Black had discussed that possibility. “It would be at a nearby parcel, but not part of the Pine Hill facility,” he said.

Kennett said Continuum has an agreement to purchase the site, contingent upon all approvals.

“This is only in the initial discussion stage, as far as Kennett and Continuum are concerned, but there will be further discussions coming,” he said.

As Bergeron noted, Kennett said the goal of appearing before the planning board last Thursday was to get feedback. He said his company and Continuum have been working on the project in the planning stages for several years.

“Why are we stepping forth now? This is a very complicated project from the standpoint of ordinances and land use regulations of the town — so the designers, architects and land use planners working with Continuum wanted to bring their ideas forth just to make sure weren’t any real stumbling blocks that will come up after the final designs are done,” said Kennett.

Echoing comments made by many in the community in recent years, Kennett said a project for the elderly is much needed, given that Carroll County has the oldest median population in the state at 51.9 years — compared to the state’s estimated median age of 43 years.

With baby boomers first beginning to turn 65 in 2011, that trend is expected to continue as retirees settle in the Lakes Region and the White Mountains.

“I don’t believe there is any doubt that in our community that senior living and health support systems are essential, and I think this Continuum project would fill a vital need,” said Kennett.

This Senior complex sounds like a wonderful idea - to THIS Senior who is looking to move to the area in the next few years. A thought on parking: having parking under the buildings would keep vehicles sheltered and eliminate the need for snow removal from vehicles and the parking area, something that would be appreciated by the residents and it may be more economically efficient in the long run. As to the buildings being taller than trees, I'm sorry to say that this regulation seems a bit silly to me when there's apparently no problem with clear-cutting to build allowable lower buildings. When you can stand somewhere and your view/vista is ruined by rows of condos scarring the hillsides, it doesn't really matter that they're LOW, does it? Site plans need to include replacement of trees as well. My 2 cents.