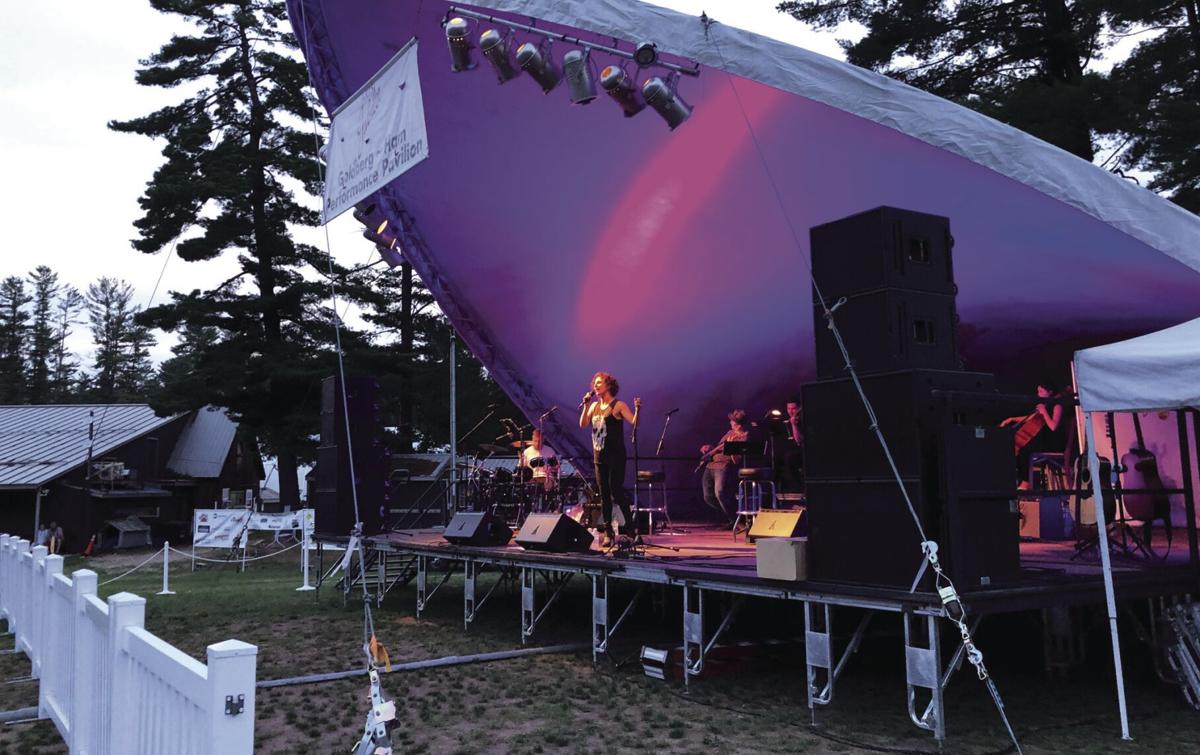 Susie Pepper of Portland, Maine, sings "Paradise By the Dashboard Light" with the Classic Rock Orchestra on Thursday at Arts Jubilee at Cranmore. (MARGARET McKENZIE PHOTO) 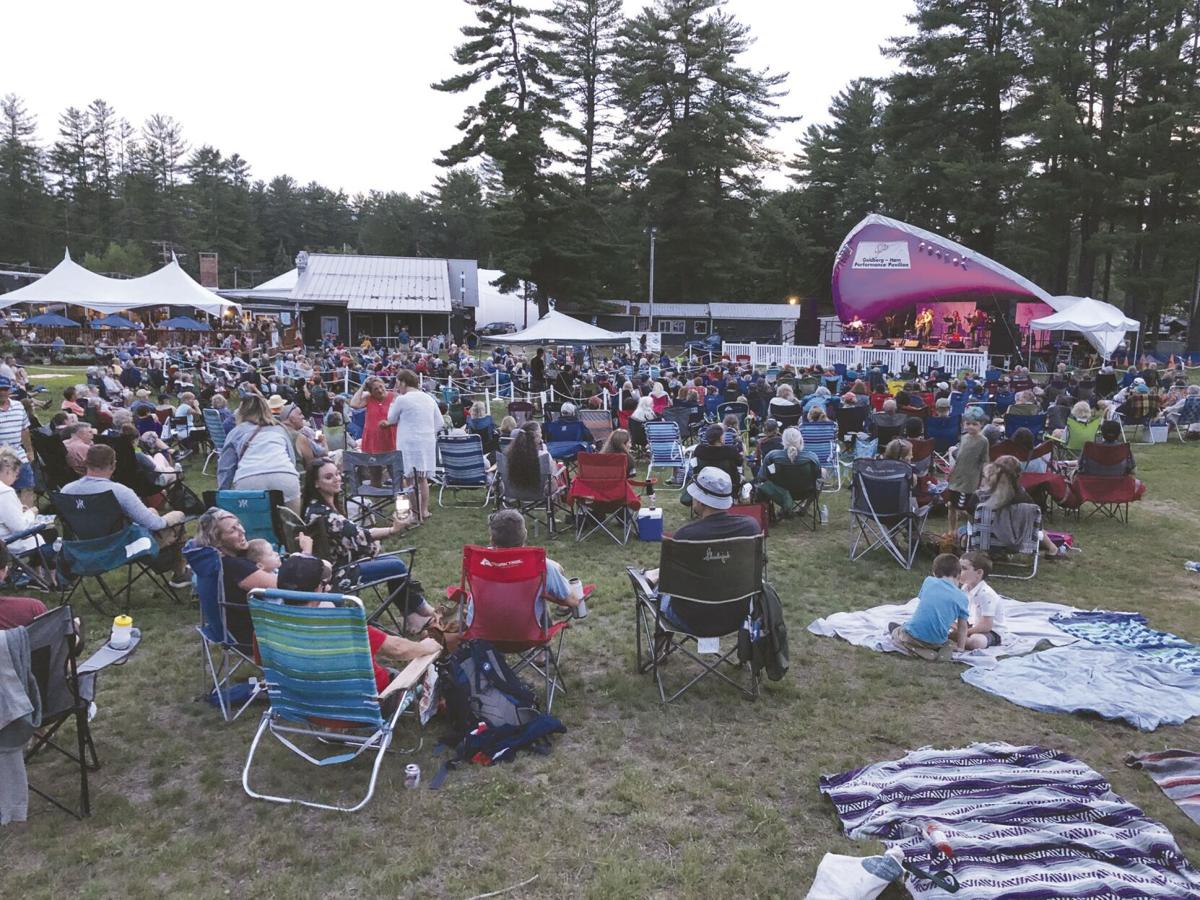 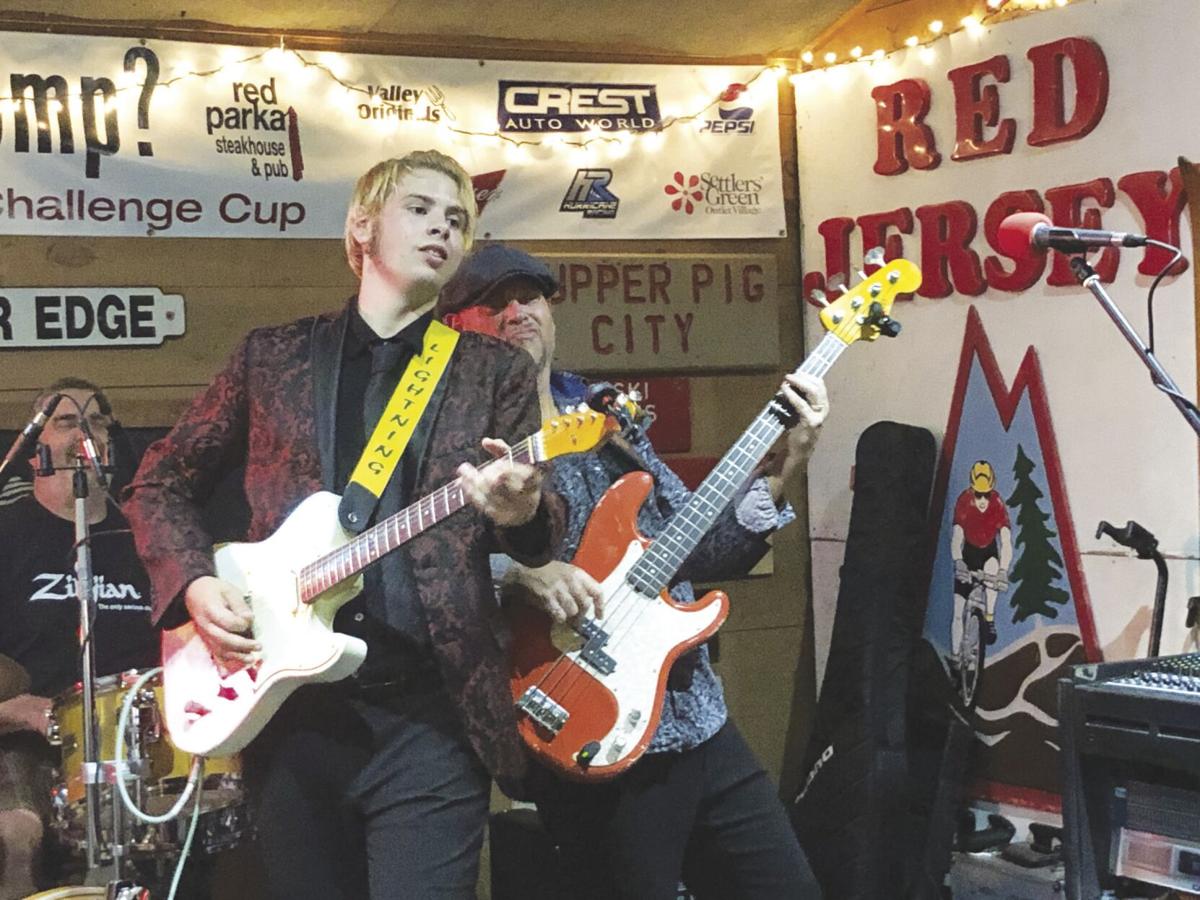 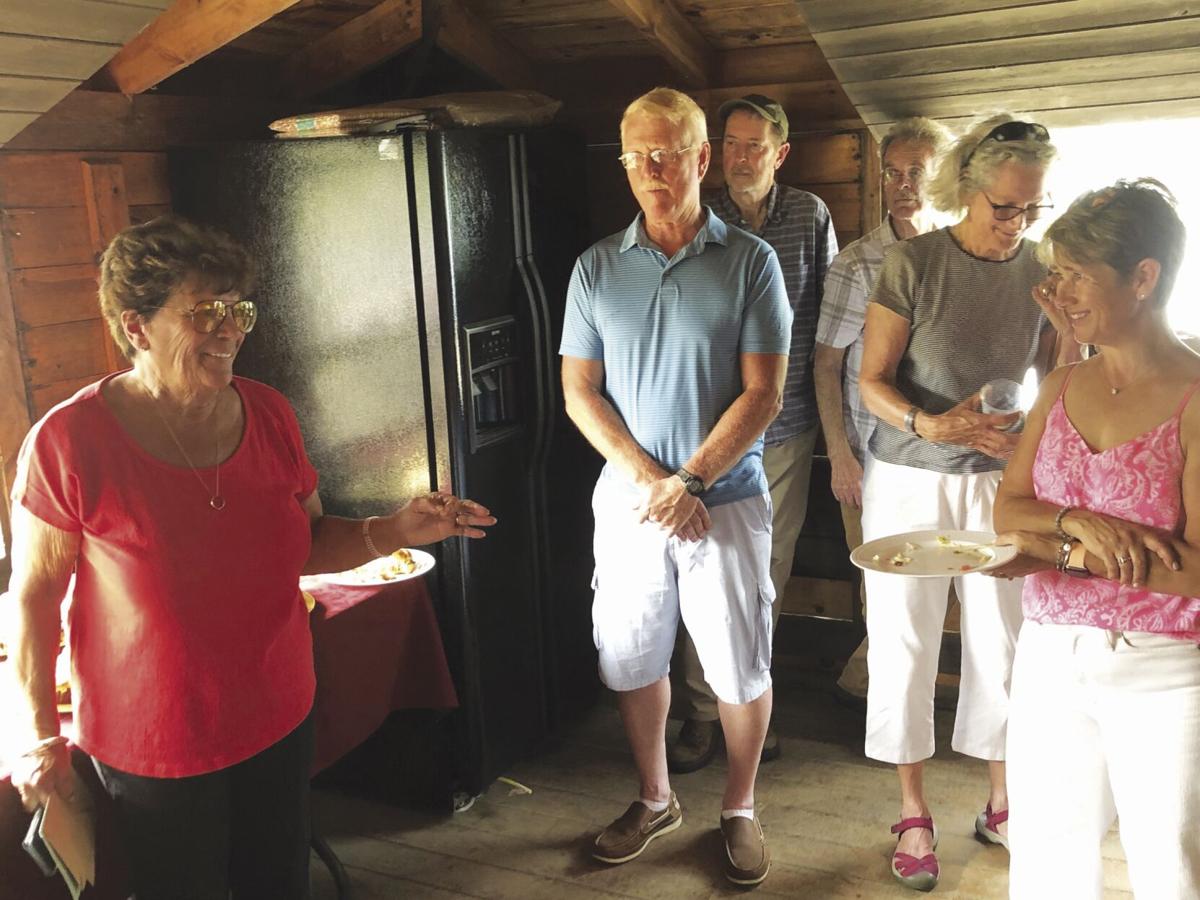 Former Big Pickle restaurant co-owner/past Cranmore general manager Marilyn Miller (left) saluted her late husband, Larry Miller, at a gathering held at the Rapputak clubhouse on the shores of Lovewell Pond near their Fryeburg, Maine home Sunday, July 11. Among the many friends on hand were Fred Jones and Kathleen Donovan. (TOM EASTMAN PHOTO)

Susie Pepper of Portland, Maine, sings "Paradise By the Dashboard Light" with the Classic Rock Orchestra on Thursday at Arts Jubilee at Cranmore. (MARGARET McKENZIE PHOTO)

Former Big Pickle restaurant co-owner/past Cranmore general manager Marilyn Miller (left) saluted her late husband, Larry Miller, at a gathering held at the Rapputak clubhouse on the shores of Lovewell Pond near their Fryeburg, Maine home Sunday, July 11. Among the many friends on hand were Fred Jones and Kathleen Donovan. (TOM EASTMAN PHOTO)

CONWAY — The long-awaited return of Arts Jubilee to Cranmore Mountain Resort took place Thursday night, much to the pleasure of the 1,000 or so who attended, according to board member/Conway selectman/ticket-seller John Colbath.

“It was fantastic to see Jubilee back,” said John, who had rushed up to Cranmore after attending the retirement party at Horsefeathers for Conway Police Sgt. Russell McLauchlan, who as colleague Lloyd Jones reported, retired Thursday, ending a 34-year career in law enforcement, including the last 21 with Conway PD.

“People were telling me at the gates they were so excited to have it return,” said John. “We had nearly 1,000 people, which is what we would like to see at all five Arts Jubilee concerts this season.”

(Yours truly relied on John’s reporting, as I could not be there, as I was taking part in a press tour of the remodeled White Mountain Hotel and Resort — such are the sacrifices of the journalistic life, but hey, someone’s gotta do it, right?)

“Becca and Mike were excellent, and the headline act, Classic Rock Orchestra, played all the hits you’d expect from the ‘70s and ‘80s. I sold several senior tickets and winked to people that they were going to hear all of their favorite songs — a few winked at me on the way out and told me they had sung along with every word of every song!” laughed John.

John gave kudos to Cranmore and all volunteers, as well as Arts Jubilee Eecutive Director Bobby Sheehan and his wife/assistant, Andrea, who were accompanied by their year-old daughter, Eiligh.

Bobby told me on Friday, "It was a fantastic way to start the season. The band was awesome; they could not have been any better. They started with Kansas’ ‘Carry On, My Wayward Son’ and ended the show with a two-song encore of ‘Under Pressure’ by Queen and David Bowie followed by Journey’s ‘Don’t Stop Believing.’”

The first raffle of the season was held. “People’s tickets are good for all five weeks,” said John.

Next up is the return of valley favorites Ceili Rain, with everyone’s favorite Celtic pop duo, Dennis (O’Neil) and Davey (Armstrong) opening next Thursday's show.

“The long-range forecast I told everybody is good. So the only rain we want is of the Ceili kind,” John said. For more, go to artsjubilee.org. Bring your lawn chair and dancing shoes!

MEMPHIS LIGHTNING: In other local music news, the Red Parka Pub in downtown beautiful Glen was the place to be July 9 for blues rock trio, Memphis Lightning.

The Lil’ Bluesman has all of the charisma and chops that it takes. As a four-year cancer survivor, he brings a compelling energy to the stage, defiantly proving to the guitar gods that he is back and not to be denied. He said he and the band will be back Sept. 5 as he celebrates his 25th birthday.

Performing at the Parka tonight is Mojo. Riley Parkhurst is there Sunday and Greg Walsh performs Wednesday. For more, follow redparkapub.com.

WELCOME BACK, DUKE! The Wildcat Tavern and Cold River Radio Show welcome back jazz blues guitar virtuoso Duke Robillard tonight for the continuation of the Garden Stage Concert Series with dinner/music shows at 4:30 and 7 p.m. Go to wildcattavern.com or call (603) 383-4245 for dinner/concert reservations.

BEER AND MUSIC: Tuckerman Brewing Co. at 64 Hobbs St. in Conway Village has Rek-lis today and Lazy River Riders tomorrow, both 3-6 p.m. Ledge Brewing in Intervale has the Sandwich Rangers tonight from 6-8 p.m.

TRIBUTE TO "MR. PICKLE": A group of valley friends attended the tribute July 11 to the late Larry Miller, who died March 23. Larry and his family moved from Washington, D.C., to North Conway in 1975, purchased the Big Pickle Restaurant and made it an extension of their home for nearly 20 years, serving up equal doses of community and coffee.

People came from as far away as Pennsylvania to be at the gathering Sunday held at the Rapputak clubhouse on Lovewell Pond near Larry and Marilyn's home.

I always felt that Larry was like the valley’s breakfast talk-show moderator at the Pickle (now home to 27 North), bringing a sharp mind to any political discussion among customers seated at the counter while making sure your coffee cup stayed full. He and Marilyn, who went on to be general manager at Cranmore just up the street, made a great team and now their kids Mark, Steve and Lisa carry on that tradition of community service.

HAVE A great weekend and see you at Ceili Rain on Thursday!