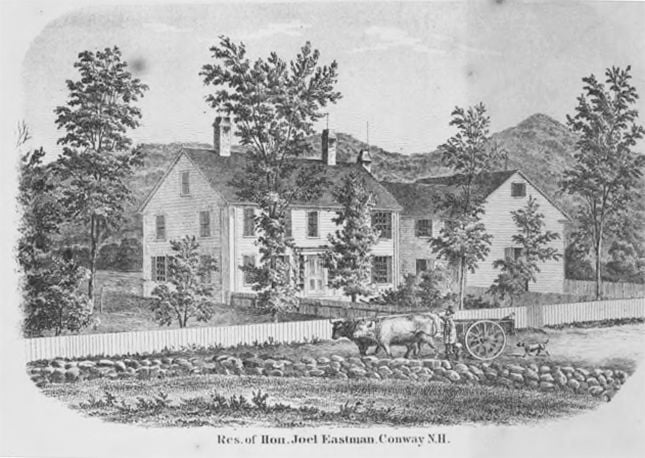 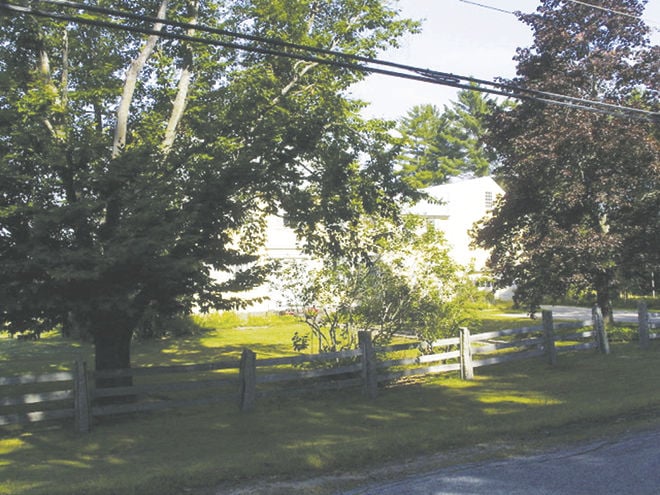 Joel Eastman’s house remains virtually unchanged since it was built, upwards of two centuries ago. In 1860, publishers of a detailed map of Carroll County found his home the only one in Conway worthy of an illustration, and the primitive engraving shown here appeared on the upper right-hand corner of their wall map. During Eastman’s lifetime, his farm dominated one of Conway’s three major intersections, but today the world leaves it largely alone.

Eastman first saw the light of day in 1798 in Salisbury, N.H., where his cousin Daniel Webster was also born. Like Webster, Eastman read law in his teens and later attended Dartmouth, graduating in 1824. Two years later, he migrated to Conway and married Ruth Odell, whose father gave them a substantial farm between the Saco River and Walker’s Pond. The house stood where the main road from Fryeburg and Conway Center forked toward either Conway Corner or North Conway. Eastman enjoyed farming so much that he neglected his legal career, but by the beginning of the Civil War he had accumulated the most valuable estate in town. He also engaged in politics, which availed him a probate-court judgeship in 1856, and he held the position until he retired from the law altogether, in 1868.

His private life was less fortunate. In 1833 Ruth gave birth to a son who soon died, and the loss appears to have affected her profoundly. By 1850, the census marshal recorded her as “insane,” and family tradition maintains that the board fences around the house and barn were intended to give her an opportunity for going outside without wandering away — especially toward the river. Her sister lived with them as a housekeeper, taking care of Ruth while Eastman was away at court or on the political circuit.

Eastman also emulated his famous cousin by adopting Whig politics, and he joined the Republican Party in its infancy. Conway turned bitterly against the Republicans when Lincoln resorted to emancipation, a military draft and the arbitrary arrest of dissenting citizens, but Eastman remained a vocal supporter. Political antagonism may have inspired the blaze in November of 1863 that destroyed his barn, across the road from the house. He rebuilt it in 1864, and the big red replacement still stands, partially visible behind Home Grown Lumber in Center Conway.

In the 1950s, the state moved the main road to Conway Village away from the house, but the turn to North Conway still took motorists across the farm and over the covered bridge that Eastman and entrepreneur Johnny Smith built as a toll bridge in 1845. In 1973, the state closed that road, too, and built a new route over the river upstream. Thus isolated, the bridge did not last long amid a population saddled with enough leisure to breed destructiveness, and in July of 1975 some local vandals set it afire for a few moments’ excitement.