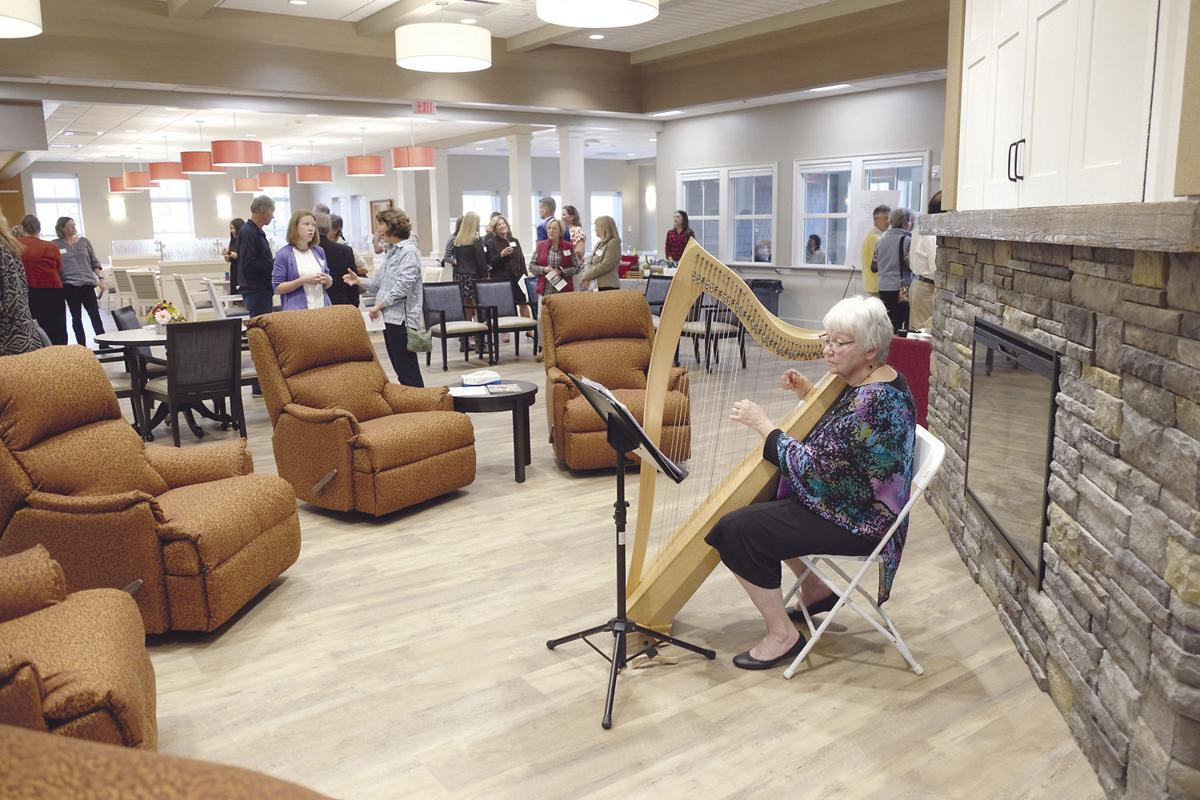 Valerie May, of Sandwich, a certified therapeutic harp practitioner, performs in the center's great room during the open house for the new Mount Washington Valley Day Center in Conway in September. (JAMIE GEMMITI PHOTO) 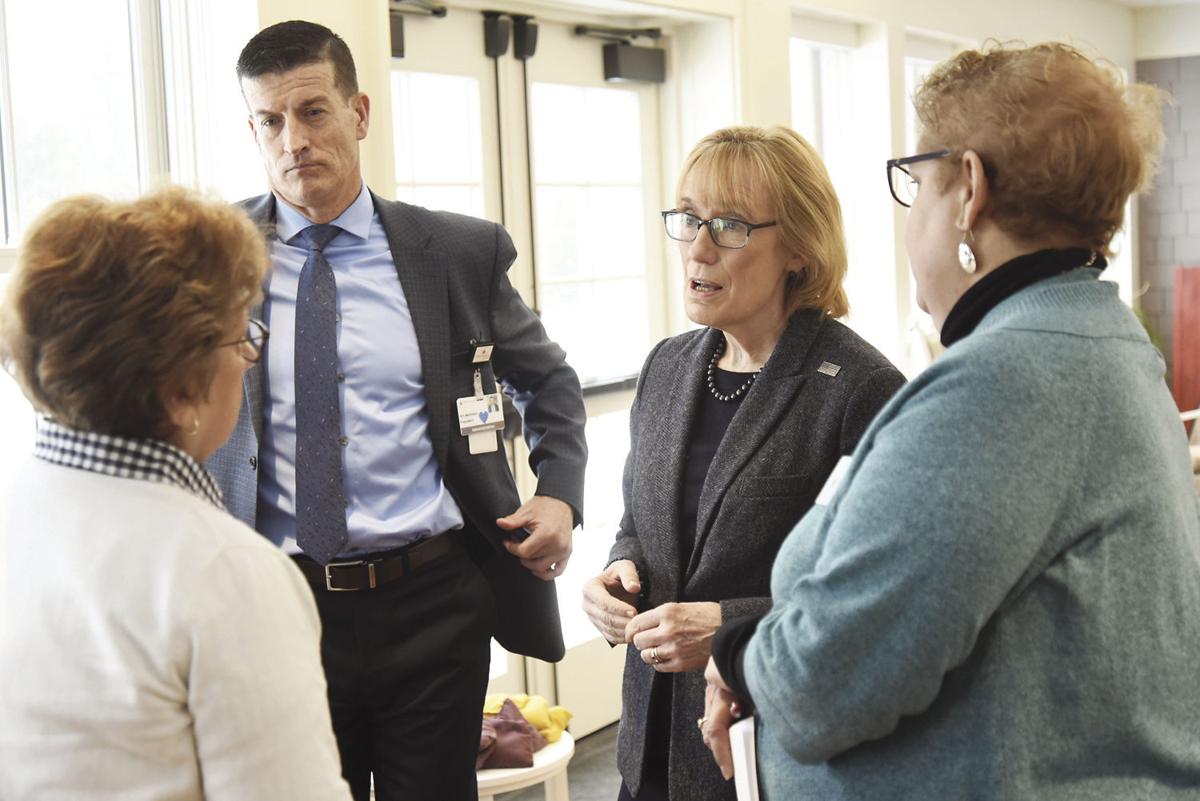 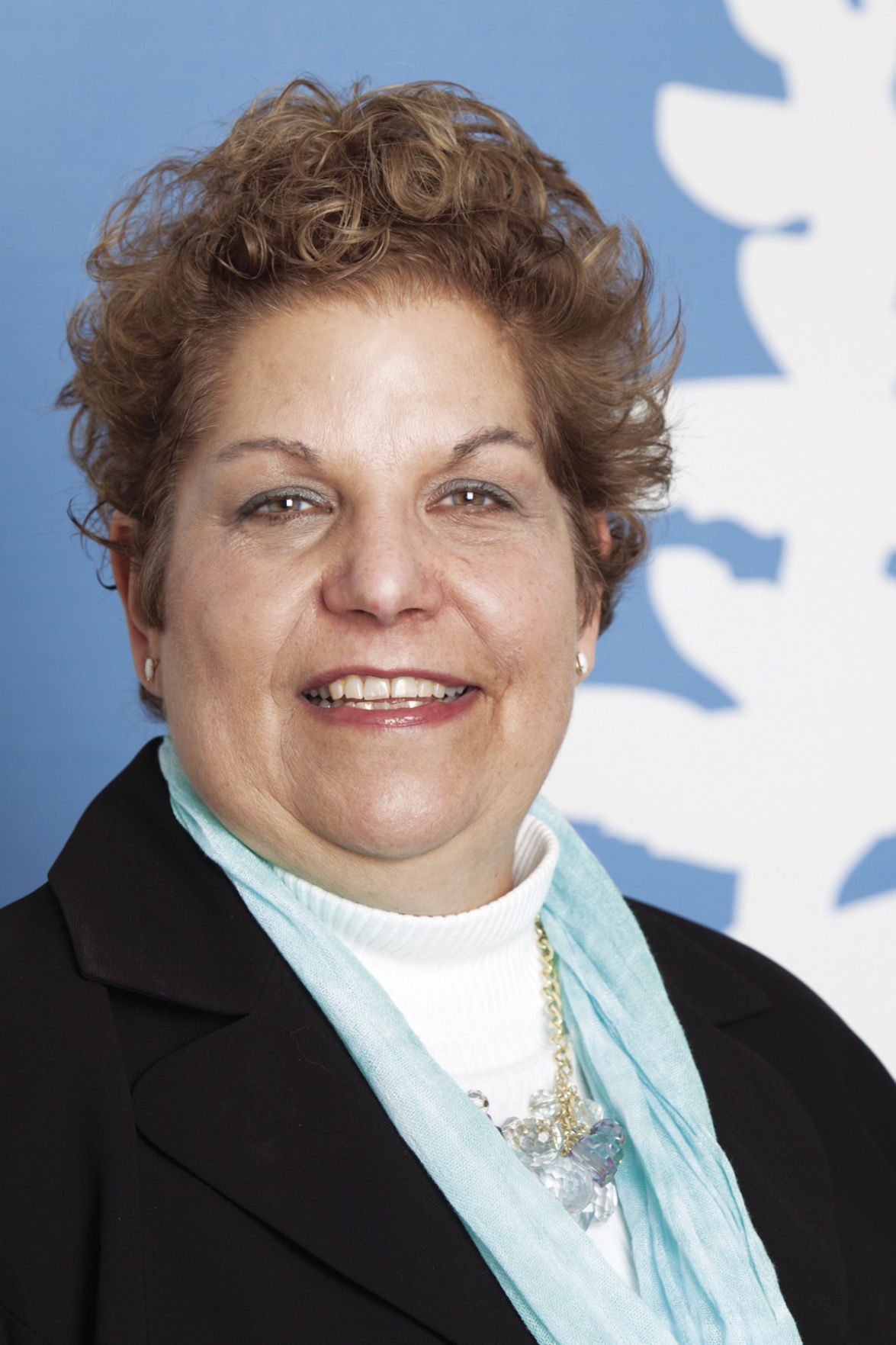 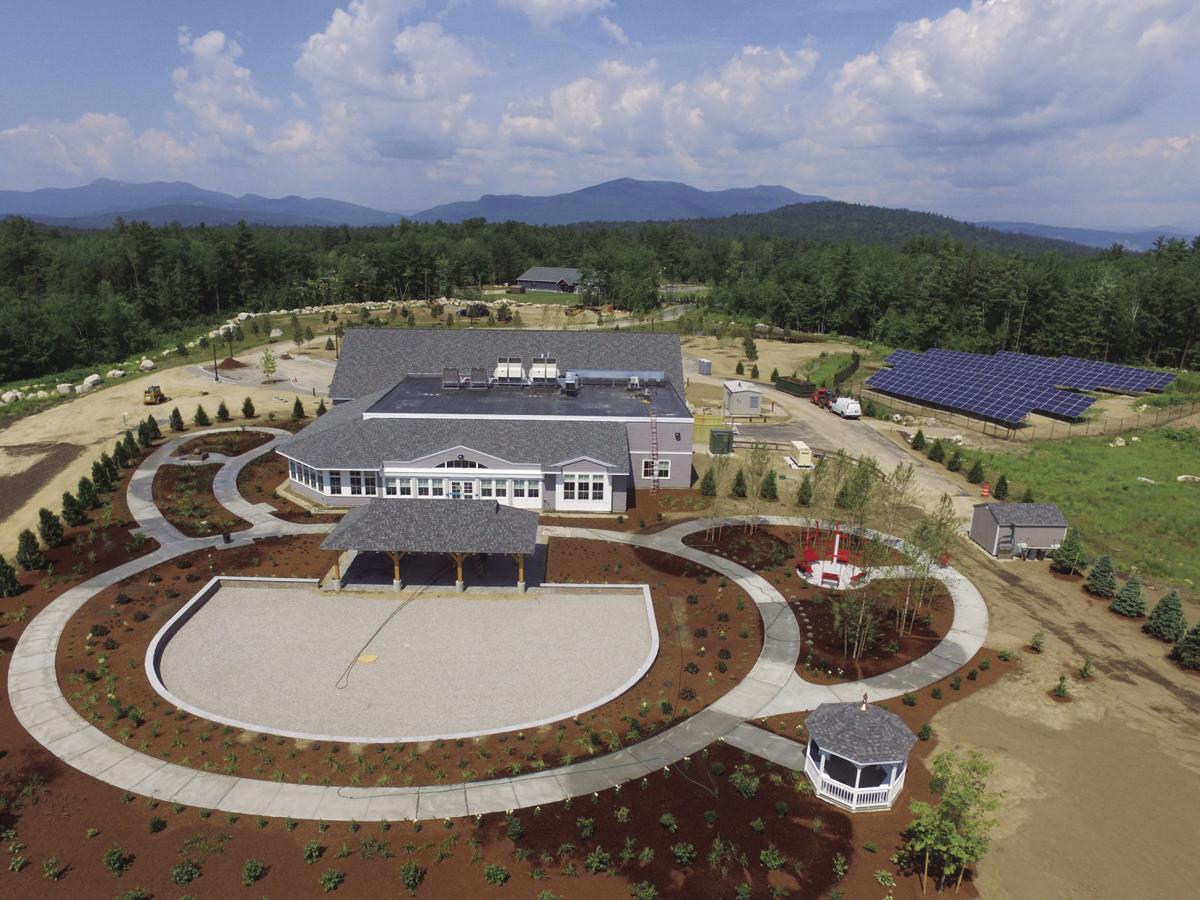 The MWV Adult Day Center is seen in the summer of 2019 as the building project neared completion. Paved walkways on the grounds, along with spaces for games, make outdoor programming an important feature of the center. (COURTESY PHOTO) 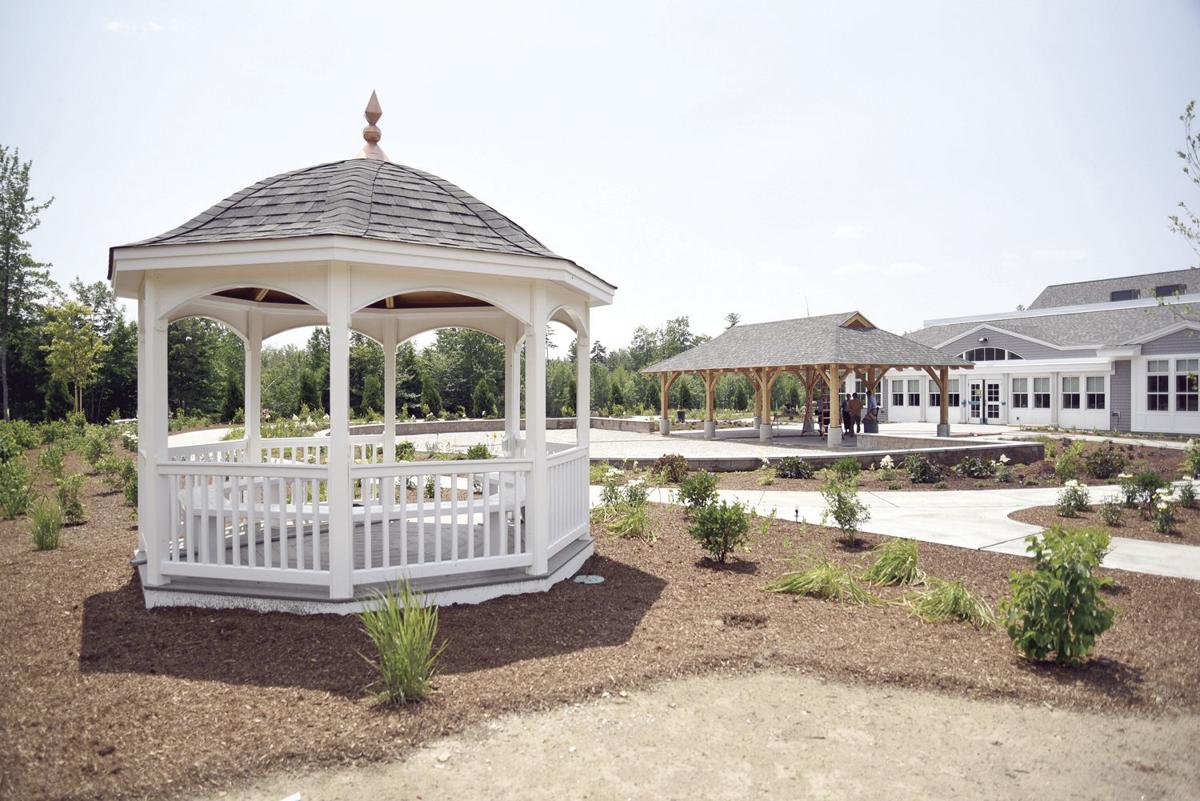 The gazebo is seen outside the new Adult Day Center in Conway is seen during a tour in 2019. (JAMIE GEMMITI PHOTO)

Valerie May, of Sandwich, a certified therapeutic harp practitioner, performs in the center's great room during the open house for the new Mount Washington Valley Day Center in Conway in September. (JAMIE GEMMITI PHOTO)

The MWV Adult Day Center is seen in the summer of 2019 as the building project neared completion. Paved walkways on the grounds, along with spaces for games, make outdoor programming an important feature of the center. (COURTESY PHOTO)

The gazebo is seen outside the new Adult Day Center in Conway is seen during a tour in 2019. (JAMIE GEMMITI PHOTO)

CONWAY — Donna Martin would like to get her husband, Dave, back to the programs at the Mount Washington Valley Adult Day Center as soon as possible.

It was forced to close March 18, when the governor began issuing a series of emergency orders because of the COVID-19 pandemic.

Dave is one of about 40 frequent guests at the center, which provides programs for people with dementia and memory loss. The programs offer socialization, exercise, games and activities — and respite to caregivers.

Donna said she has seen great benefits for both Dave and herself from his being able to attend the center’s programs three times a week since it opened last September off Route 113 in Conway Village.

She is one of about dozen local people who have joined others around the state in writing to the Governor’s Economic Re-Opening Task Force to ask that adult day center programs be allowed to reopen.

In a letter to state Rep. William Marsh (R-Brookfield), a member of Gov. Chris Sununu’s Economic Re-Opening Task Force, she said: “When the ADC (Adult Day Center) opened up and (Dave) became a guest, he was like a new person. The dementia will only increase, as we know; however, he gets up in the morning raring to go because he has something to look forward to. His whole personality had improved.”

But that improvement came as a brief window in Dave’s decline.

The MWV Adult Day Center grew steadily over the six months since opening in September 2019, to accommodate 40 guests.

But following the shutdown over three months ago, Donna and Dave have been at home, and she said Dave has once again become withdrawn, sleeping up to 16 hours a day and watching TV.

“He has lost everything he had gained and some since it closed,” she said.

Jackie Corrigan, whose husband of 52 years has Parkinson’s disease and Lewy body dementia, said her husband improved physically, socially and mentally when going to the center, where he shot baskets and rode on a stationary bicycle, among other activities.

“Now, three months later, he’s angry, moody and has lost some walking ability and a lot of vocabulary,” she said. “I don’t know if he can recover what he has lost, but I do know that not going to the center is going to cause continued decline.”

Another caregiver, David Haskell of Tamworth, wrote to the governor to say, “I believe I am in a good position to determine what is best for my loved one. ... I want to keep her at home, but I am worried that I cannot do it if our Mount Washington Valley Adult Day Center remains closed.”

As a member of the N.H. Adult Day Services Association, which includes 17 adult day center programs around the state, Ruka has been working with other center directors on plans to safely reopen and has presented plans to the reopening task force.

The plans include limiting the number of people in the center at any one time, excluding everyone except guests and staff, increased cleaning of the facility, providing outside programs, and testing and screening for the coronavirus following state and Centers for Disease Control guidelines.

She said in a telephone interview Wednesday that the state has not yet announced a date for reopening centers or approved guidelines for that reopening.

“We’re supposed to have a guidance document out by the end of the week,” she said.

Noting that restaurants, shops and Conway Scenic Railroad are now opening up, she believes it is time, too, for adult day centers to reopen.

That sentiment was echoed in a letter to Sununu from Julie Van Dyne, R.N., coordinator at the MWV Adult Day Center, who said, “If we can be open to people from out of our community and state, then I believe that we should be able to open a much needed resource for those living in our community.”

And while there will still be risks as long as the coronavirus is around, Ruka said, reopening can be done safely, with qualified medical staff focused on the health and safety of the centers’ guests.

Before the closing, the MWV Adult Day Center had already upped its cleaning regimen to every two hours in order to protect people.

The center also features large spaces that will make it easier for the staff to keep people apart. For the time being, volunteers who came to provide some programs for guests will not be allowed.

“We want to stress, we are not a nursing home,” said Ruka, who is the former director of the Merriman House nursing facility at Memorial Hospital.

She noted that people who go to a nursing home are often more frail, have more advanced dementia, and require more physical care than people who live at home and would be attending the day center programs.

It is also much harder to separate people who are ill from those who aren’t in nursing homes.

“We have much more control over the environment. We can screen people and if they show symptoms or exposure we would say they couldn’t come,” she said.

The Governor’s Task Force on Economic Reopening unanimously approved the plan, but Ruka said, “we’re still getting pushback” from the state Department of Health and Human Services.

Those who attend adult day center programs are people who are at high risk for the coronavirus because of age and other health issues. But Ruka said keeping adult day centers closed is not a neutral act.

Many guests see the kind of improvement that Dave did from attending center’s programs.

“They are happier, more engaged, physically stronger,” Ruka said. “You take a service away for three months, people are going to decline.”

“And remember, we are caring for two people, the person that attends and the caregiver,” she said, noting, “We’re all finding increased stress, anxiety, depression and physical fatigue (among caregivers). This is taking a toll on health.”

While some families and guests may not feel ready to return, she said, “They should be allowed to make the decision taking into account the risks associated with isolation. You want to go for quality of life now for a person with dementia.”

For Donna Martin, there is no question.

“We all understand it had to close due to the virus,” she said in her letter. “However, it is time it opened up again, no only to help Dave but all the other guests that are experiencing the same decline.”