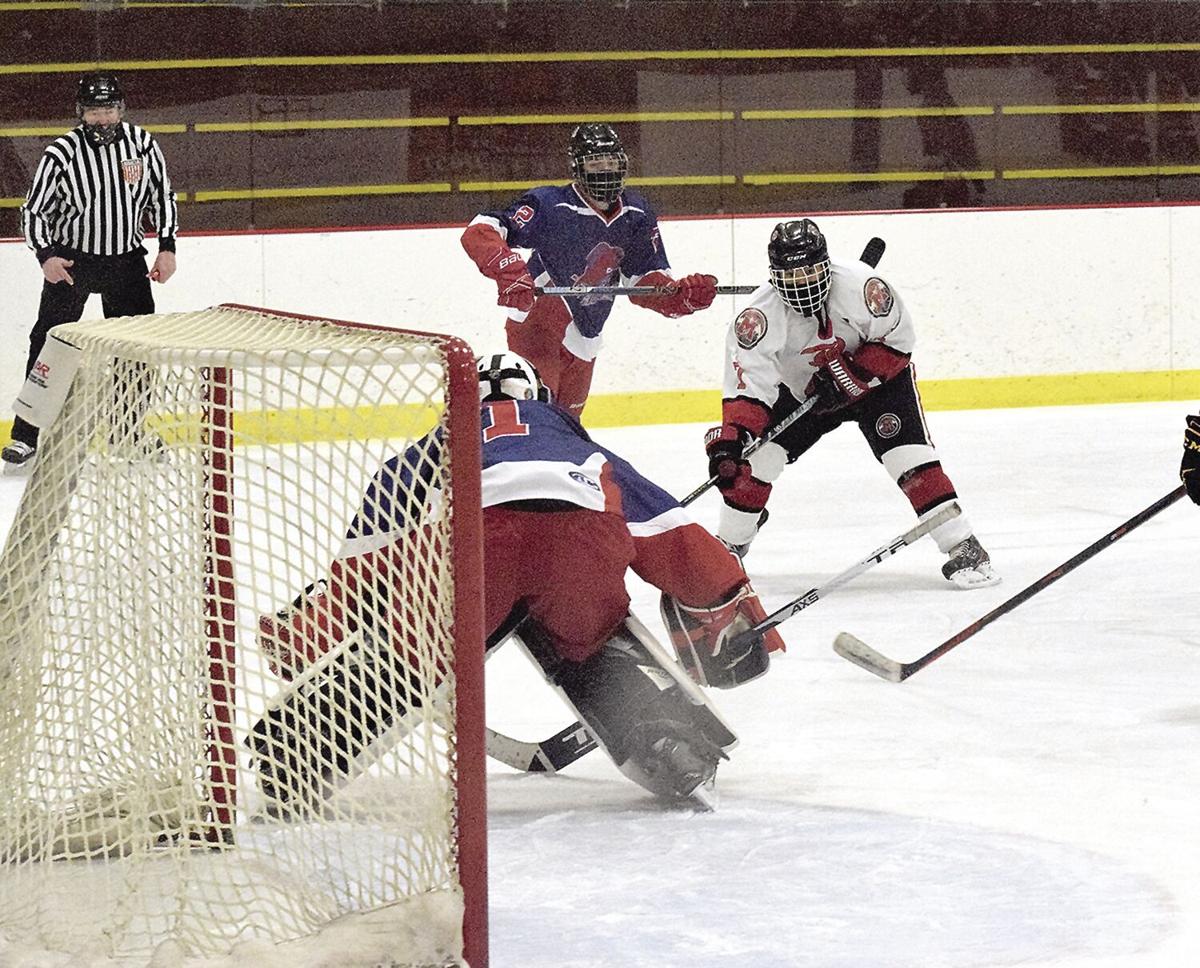 Berlin-Gorham senior Tyler Rousseau is about to score his 100th career-point for the hometown hockey team in its 2-0 win over Laconia-Winnisquam-Inter-Lakes on Thursday night at Notre-Dame Arena. (ANDY RANCLOES PHOTO) 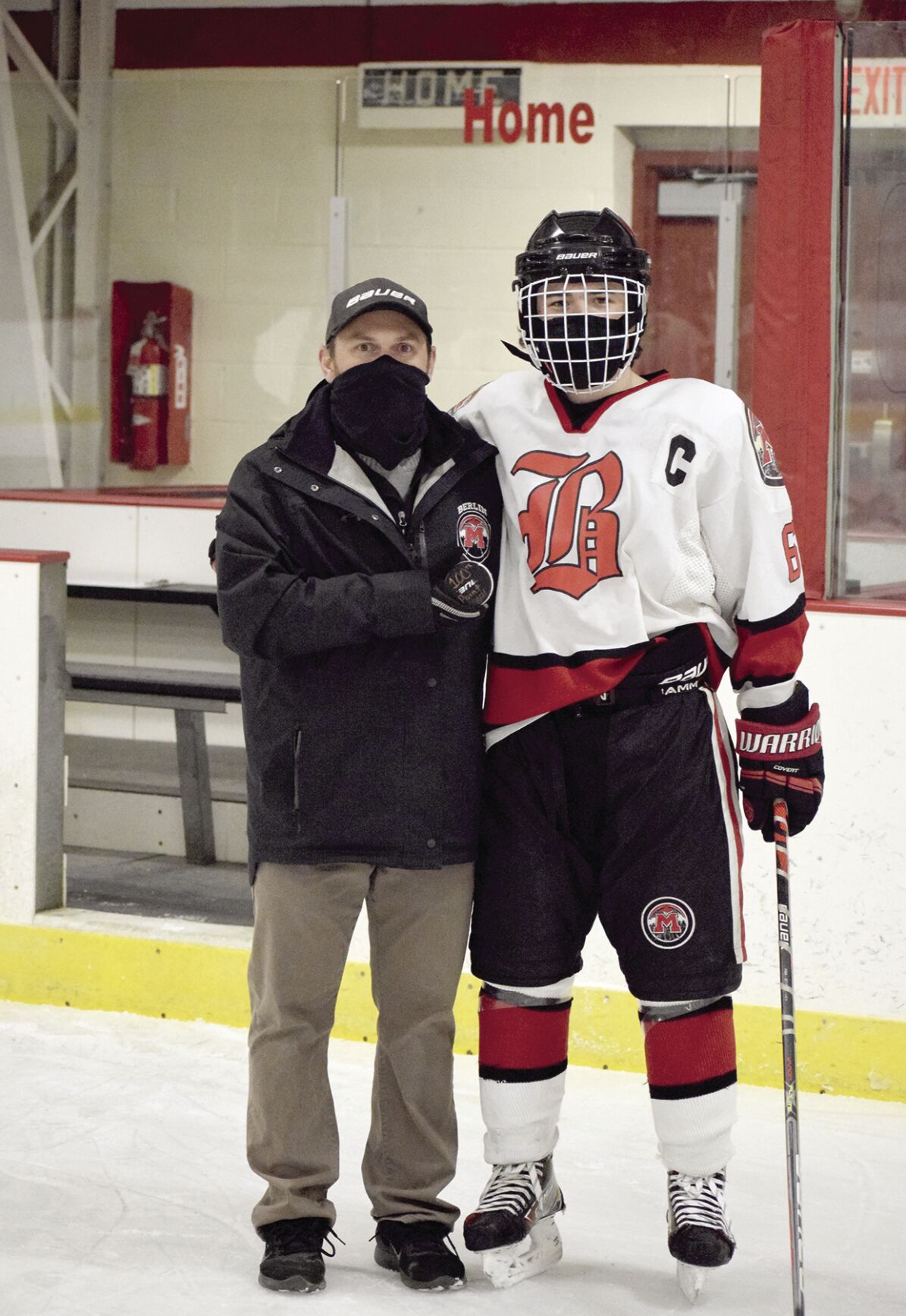 Berlin-Gorham senior Tyler Rousseau scored his 100th career-point for the hometown hockey team in its 2-0 win over Laconia-Winnisquam-Inter-Lakes on Thursday night at Notre-Dame Arena. Coach Mike Poulin presented him with the puck for attaining the milestone. (ANDY RANCLOES PHOTO) 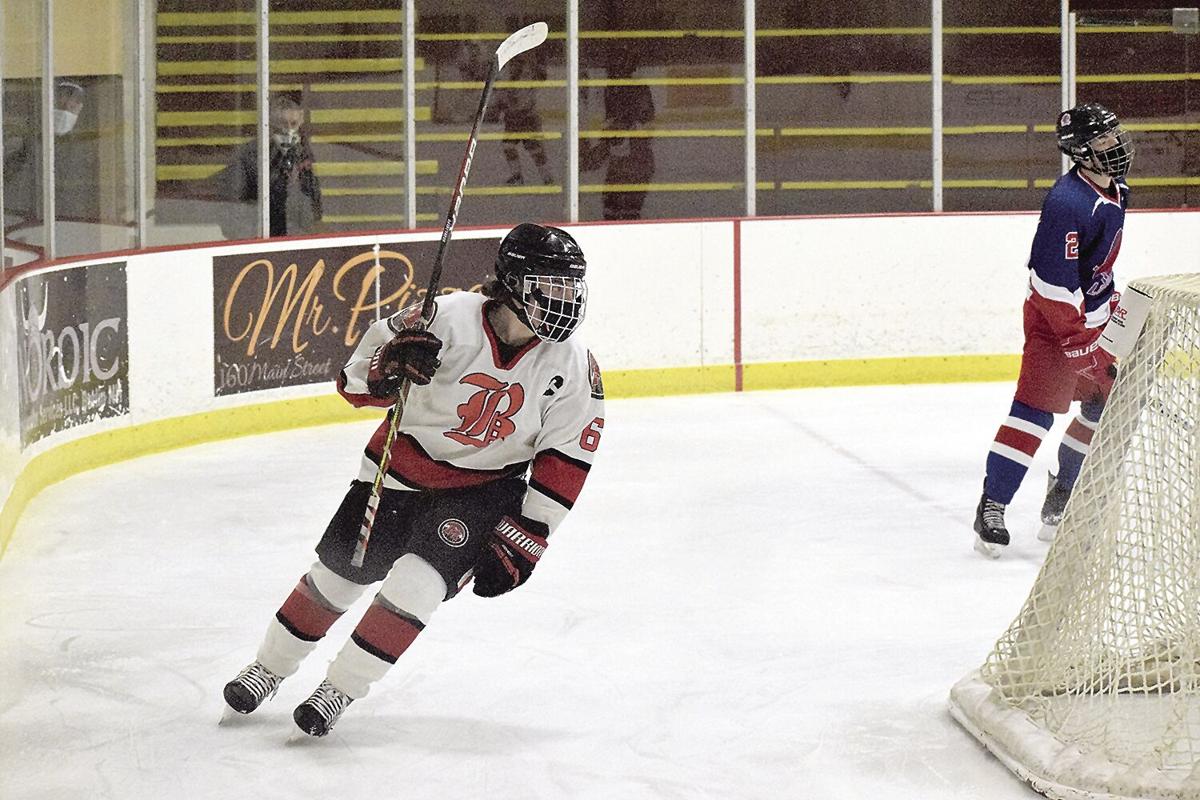 Berlin-Gorham senior Tyler Rousseau is about to score his 100th career-point for the hometown hockey team in its 2-0 win over Laconia-Winnisquam-Inter-Lakes on Thursday night at Notre-Dame Arena. (ANDY RANCLOES PHOTO)

Berlin-Gorham senior Tyler Rousseau scored his 100th career-point for the hometown hockey team in its 2-0 win over Laconia-Winnisquam-Inter-Lakes on Thursday night at Notre-Dame Arena. Coach Mike Poulin presented him with the puck for attaining the milestone. (ANDY RANCLOES PHOTO)

Welcome to today's edition which has us winding down the winter high school sports season. We have a ton of games to report on.

I do want to correct a couple of slips in the Feb. 18 column.  The Berlin girl's basketball beat Canaan-Pittsburg 44-31, not 44-3, and even though BHS boy's senior basketball player Shaun Goyette was identified and pictured with his family and other senior teammates, his name was left out of my column regarding senior recognition night.

All eight BHS athletes scored, led by post-graduate, Kolbe Delafontaine, who had a night to remember scoring at will and finishing with 28 points.  Christopher Trask chipped in with 16 points, followed by Ross and Roger Belanger with six points apiece; Candice Howry and Randy Belanger had four points; and Felix Frechette and Jeremy Howry both scored two points each.

Felix especially, and the Belanger boys had numerous assists, both for their teammates and the visiting team during the game.

Partners Alyssa Delafontaine, and Emile and Elianna Morris played unselfish, mentoring basketball throughout. Both Kolbe and Alyssa, as well as Roger, and Emile were honored and recognized for their many years of dedication and devotion to the unified program as this will be their final season.  The visitors were led by Christian Duba with 24 points and Zeke Richardson 14 points.

The Berlin-Gorham boys’ hockey team shut out Laconia-Winnisquam-Inter-Lakes twice in 24 hours — 4-0, down south in Laconia last Wednesday and 2-0, here at home on Thursday.

In  the 4-0 win, senior Tyler Rousseau scored the first goal, a shorthanded one with an assist to Griffin Melanson and the last one with assists going to brothers Evan and Carter Poulin.  In between Cam Pake scored a goal, thanks to assists from Jonah Berthiaume and Rousseau.  The third goal was also a shorthanded one when Goalie Kolin Melanson, who also had 18 saves for the shutout, assisted Carter Poulin.  L-W-I goalie Evan Rollins had 24 saves.

"Everyone played and we got to look at some different line combinations,” stated Coach Mike Poulin.

The second game, the next night, was an action-packed, back-and-forth one with B-G having the advantage regarding shots-on-net, 38-15, but not a great advantage in the scoring column.  There were two goals and two penalties throughout the 45-minute game, with the first goal being an historic one, including what proved to be the winning goal.  It came at the 7:11 mark of the first period when Rousseau took a pass from Ben Estrella that had originated off the stick of Cam Pake and proceeded to skate nearly the length of the ice on the right side to dent the net and the scoreboard for a 1-0 lead, one that would stand until early in the 3rd period.  As it turned out, this particular goal was Rousseau's 100th career-point, which was the major highlight of the night.

The visitors had a power-play opportunity during that first period and another one in the scoreless second period but the Mountaineers effectively killed both in fine fashion.  At the 4:27 mark of period 3, Dom Paradis set up Griffin Melanson for the second and final score of the night to give the hosts a bit of breathing room.  Evan Rollins was superb in the net for L-W-I with 36 saves while B-G's Anthony Pizzuto has 15 saves for another shutout.

A nice touch was added at the end of the game when Coach Poulin presented Tyler with a puck commemorating the 100-point milestone.

Congratulations to Tyler for this special achievement. In a "visit" with Tyler he shared, "I am very proud of my accomplishments and where my team stands this season.  We have a great group of guys and I couldn't have done it without every single one of them (presently and in the previous three seasons).  It's too bad the fans and my Dad couldn't be there to celebrate with me.  I know my Dad is watching over me and cheering me on!"  Well spoken, Tyler.

Coach Poulin was quick to point out, "It was nice to see Tyler get his 100th point of his career early and at home.  He knew he was close but not that close.  To score it at home and with a great broadcast on NSN and have it be the winning goal was special."

Coach added: "During my tenure as the BHS boy's hockey coach I have had three players who hit the 100-point mark and that includes Connor Jewett (also had 100 goals), Justin Vien and now Tyler Rousseau."

All of you hockey historians out there are encouraged and welcome to contact me if there are others at both Berlin High and Notre Dame with a list of 100-point scorers, and I am sure there are many.   Email me at steenm6@aol.com.  Thanks.

The New Hampshire Interscholastic Athletic Association has announced the initial tournament schedule and what we have at this point in time is just basketball.

Division IV has the Gorham Huskies boys slated to travel to Groveton on Monday, March 1, game time 7 p.m., while the Gorham girls are scheduled to host Profile on Tuesday, March 2, at 7 p.m.

I would assume that most of those games will be broadcast on NSN.  Check their website for tournament schedules.

The NHIAA has what they call "An open tournament by division, based on location in the state, and proximity to each other.  All numbers and positions are randomly generated."

There may be some who disagree with this format but as long as the kids are playing does it matter?  And let's hope and pray they can complete the tournament schedule.

More information as well as unified basketball and boy's and girl's hockey schedules will be highlighted in Thursday's edition.