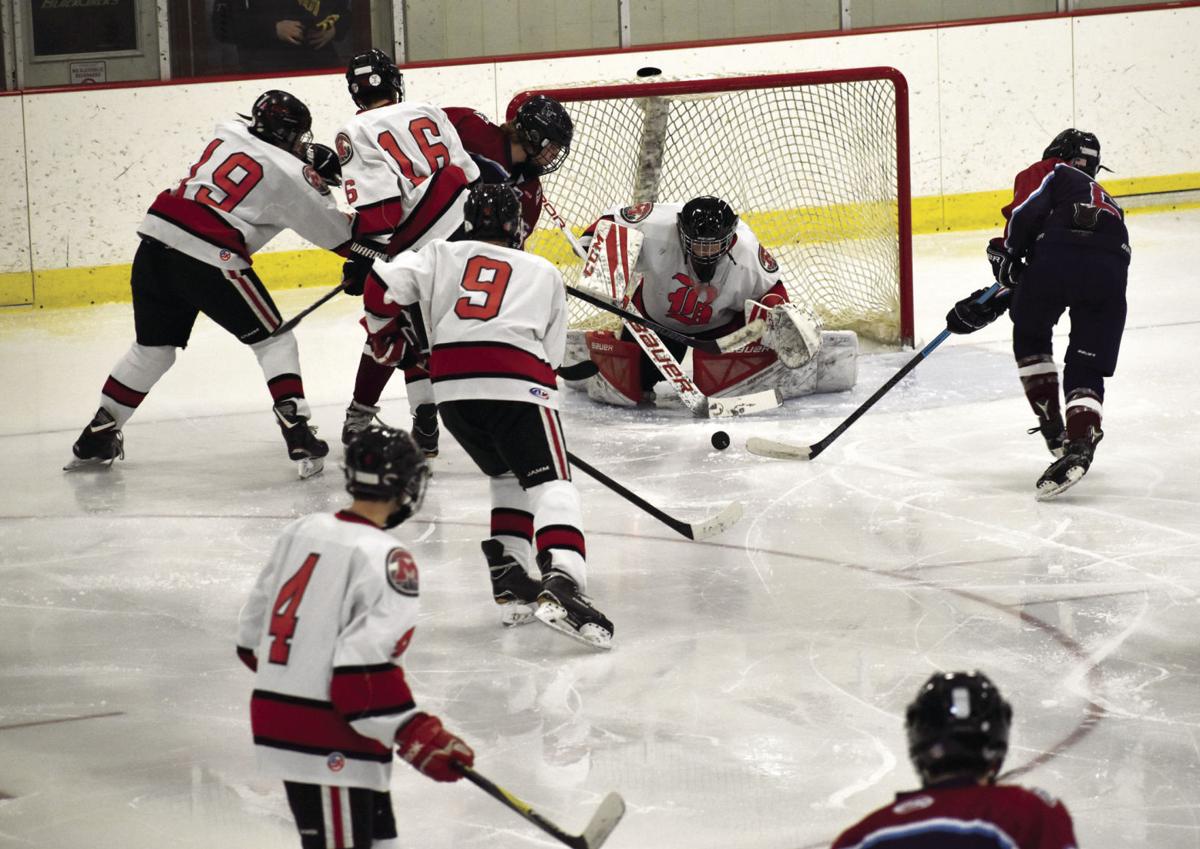 A host of Berlin High boys hockey players, including No. 19, Jonah Berthiaume; No. 16, Carter Poulin; No. 9, Griffin Melanson; and No. 4, Landyn Croteau are ready to assist teammate and goalie Anthony Pizzuto after he made an initial save on a Hollis Brookline-Derryfield player.  Berlin won the game 5-4 in overtime. (ANDY RANCLOES PHOTO) 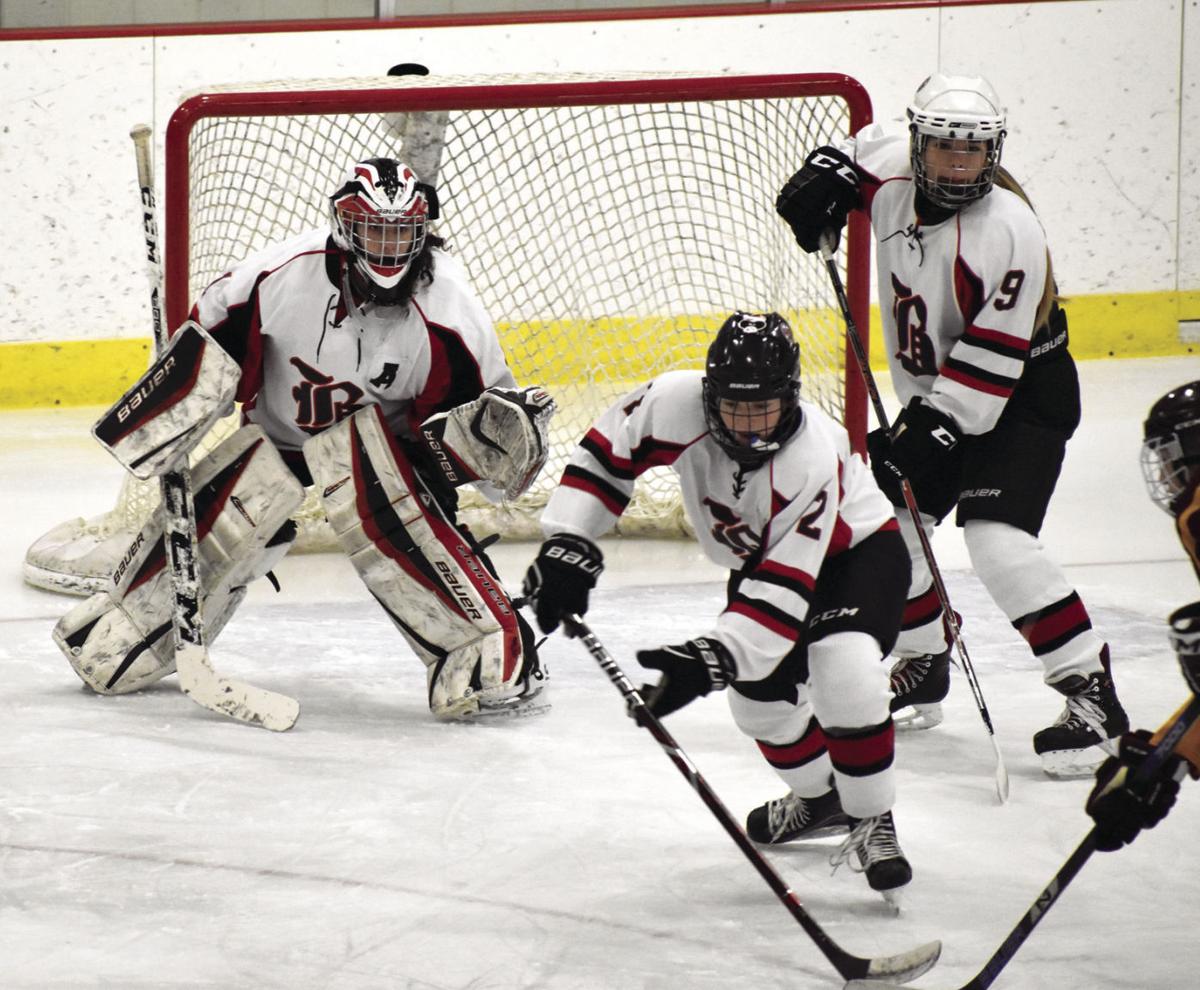 Berlin High School’s No. 2 Sophia Schoenbeck (center) and No. 0 Bryn Dube (right) play solid defense in front of goal tender Kaelyn Blais in a recent game with Lebanon-Stevens-Kearsarge which ended in a 3-3 tie.  (ANDY RANCLOES PHOTO)

A host of Berlin High boys hockey players, including No. 19, Jonah Berthiaume; No. 16, Carter Poulin; No. 9, Griffin Melanson; and No. 4, Landyn Croteau are ready to assist teammate and goalie Anthony Pizzuto after he made an initial save on a Hollis Brookline-Derryfield player.  Berlin won the game 5-4 in overtime. (ANDY RANCLOES PHOTO)

Berlin High School’s No. 2 Sophia Schoenbeck (center) and No. 0 Bryn Dube (right) play solid defense in front of goal tender Kaelyn Blais in a recent game with Lebanon-Stevens-Kearsarge which ended in a 3-3 tie.  (ANDY RANCLOES PHOTO)

The Berlin High School Boy’s hockey team had a successful two-win week, a 5-2 win over Kennett at the Ham Arena and a 4-1 win over ConVal-Conant Saturday at the Notre Dame Arena.

In the win in Conway, Berlin took an early 2-0 lead, on unassisted goals by Landyn Croteau and Ben Estrella but as Coach Mike Poulin said, “We took our foot off the gas pedal at bit after that two-goal lead, and Kennett made us pay with two to tie it up after one period.”

At the 11:43 mark of Period 2, however, Tyler Rousseau, with a set-up pass from Trevor Breault, scored a power play goal, a goal that proved to be the game winner.

Then Griffin Melanson with help from Brody Duquette and Dominick Paradis scored at the 2:57 mark of Period 3 to give the visitors some breathing room.

Late in the game, Kennett was on a power play and had pulled their goalie to give themselves a six on four advantage when Trevor Breault stunned the home crowd and elated us Berlin fans by intercepting a pass and scoring an empty netter at the 14:30 mark to seal the win.

Thanks to Berlin Managers Landon Boucher and Adam Hodgdon for providing me with statistics from this game.

Coach Mike Poulin said, “We played well but had a difficult time finishing as the opportunities were there. The boys are continuing to work on those opportunities.”

Berlin was firing on all cylinders early and pretty much throughout the game. Even though they had 14 shots on goal in the first period, though, they could only manage one goal. It came late, at 11:56, when Trevor Breault did some pretty fancy stick work himself to eventually get the puck to Rousseau, who made no mistake as he scored his first goal.

Second period action was all Berlin, especially the first four or five minutes of the period.

At 6:31, Paradis sent the puck across and near the crease to where Rousseau was parked on the left side of the goal.

He promptly tipped it in to give the hosts a 2-0 lead.

At 14:18, Estrella and Breault passed the puck between them before getting it to Rousseau, who scored on a hard slap shot that went through a slew of players into the back of the net for the hat trick and a relatively comfortable 3-0 lead.

Period 3 saw ConVal-Conant finally score, at 9:55, when a player took a wrist shot from the top of the right face-off circle that hit the post, and deflected in.

Berlin got that  goal back  at 12:01, when Carter Poulin hit the post, Berlin got the puck back, and Estrella and Melanson set Carter up for a shot that did not hit the post but instead the back of the net for a 4-1 lead and shortly after the win.

ConVal-Conant’s goalie Cole Turner turned away 40 shots, while Berlin’s Anthony Pizzuto had 11, but some were pretty spectacular.

Berlin had so many chances and all players played extremely well but of special note, Jonah Berthiaume got some valuable ice time, and one time in particular had a great chance (at 8:48) but Turner was up for the task and made a grand save.

Presently Berlin is on a 4-game wining streak to go along with a first game loss.

The Berlin-Gorham girls were at St. Thomas-Winn-Dover Saturday afternoon and came away with a pulsating 2-1 win to up their record to 5-1-2.

Prior to the win, St. Thomas-Winn-Dover was undefeated at 5-0 and in first place.

Berlin is now in third place, .333 points behind the Saints.

Berlin High girls basketball had a couple of tough and close games this past week, losing to White Mountain Regional, 42-41, and then squeaking by Belmont, 31-29.

In the White Mountain game, things were snug throughout as indicated by a 28-28 score after three periods.

The Spartans outscored the Mountaineers 14-13 in the final frame to win by that one point.

Berlin Coach Don Picard reflected on the game, saying, “The game came down to free throws.  We did a great job of getting to the line but went 7 for 22 which was a key to the loss.”

Kaylee Peare led the locals with 17 points, followed by Makenna Balderrama with 10, seven from Makenna Peare, three from Madison Cordwell, two each from Ashlin Lozeau and Isyss Remillard and one from Kelly McCormick.

The Belmont game came down to free throws again, but this time Berlin rose to the occasion, going 14-25, including a combined 12 for 19 from Balderrama and M. Peare.

Makenna Peare was two for two from the free throw line with 6 seconds remaining to help seal the win.

In this win, Picard had high praise for the “Good progress we are making in numerous aspects of the game, especially from the free throw line. We will keep working to get better.”

Makenna Peare and Balderrama each scored 12 points, with K. Peare and Libby Picard, three each; and Cordwell, one.

The Gorham boys lost to Colebrook 56-48, in a game that Coach Dave Morrissette termed “the best effort of the season.”

“We held their big scorers below their averages, thanks to great defensive efforts by Ben Beals, Wyatt Deblois, Jesse Laflamme and Anthony Frisk. We made some critical errors in the last minute of the game that made the difference,” he said.

The next night at Groveton, the locals lost 75-48, and again.

Morrissette said, “The Colebrook game the night before took a lot out of us and we had a let down. We hopefully will learn from it and focus on the next game.”

Focus they did and defeated Hinsdale 75-65, in a game that featured lots of offense.

Morrissette said: “Everyone on the team contributed in all aspects of the game to win it.  Rebounding is improving, we played great defense against a tough Hinsdale team with solid offensive threats.  Having Chase Malia back from a bout with the flu helped a lot too.”

The Gorham girls lost all three games but other than the 54-14 loss to Colebrook, they played well, giving Groveton a  run for their money, losing 43-35 and then to Hinsdale by a 49-38 score.

Due to the fact that not everyone is able to make some or even any of the local high school sporting events in the area, there are two places you can go on the web to watch certain games.

Even though, in a sense, these two businesses are in competition, the point of both of them is to bring games into your homes, or wherever you are, when you can’t watch them in person.

The first is northeastsportsnetwork.com, (NSN)  the second one is phlumestream.com (PSC).

In upcoming games that I list, notes will be next to them as to which games are viewable on line and at what site.

Of special note: I want to let Rod Blackburn know that I am thinking of him and praying for a full recovery with a health issue he is facing.

Also, my condolences and prayers go out to the families of Andre Berthiaume and my fellow teacher Bob Barbieri, two men who spent plenty of time over the years attending plenty of games and activities of, first their children, and later their grandchildren. I saw them at the events and at breakfasts in some of the local restaurants, and always enjoyed good conversation with them.  They will be missed for sure!