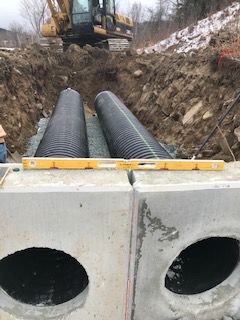 The double concrete headwall and drainage pipes for the crossing of the Gorham Water and Sewer Department’s sewer main interceptor (that runs at a right-angle to the drainage pipes) was installed last week as part of finishing up the snow storage project. (Courtesy Jeff Tennis) 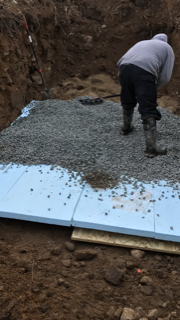 Plywood plus 4 inches of insulation was installed over the sewer main interceptor last week and then 4 inches of stone added to serve as bedding for the drainage pipes as part of the completion of Gorham’s snow storage project just before the first snow storm on Nov. 24. (Courtesy Jeff Tennis)

The double concrete headwall and drainage pipes for the crossing of the Gorham Water and Sewer Department’s sewer main interceptor (that runs at a right-angle to the drainage pipes) was installed last week as part of finishing up the snow storage project. (Courtesy Jeff Tennis)

Plywood plus 4 inches of insulation was installed over the sewer main interceptor last week and then 4 inches of stone added to serve as bedding for the drainage pipes as part of the completion of Gorham’s snow storage project just before the first snow storm on Nov. 24. (Courtesy Jeff Tennis)

GORHAM — The snow plowed up in heaps along the edge of the sidewalks on Main Street’s downtown was picked up and trucked to the just-completed snow storage area in the expanded Department of Public Words yard on Monday, Nov. 25.

“The project was literally finished on Friday, just two days before the first snowstorm of any size” said chairman Mike Waddell at Monday evening’s selectmen’s meeting. “We got a letter from project manager Paul Schmidt of CMA Engineers of Portsmouth, saying the construction work had been completed.”

The selectmen walked the site together on Thursday and watched as crew members of general contractor A. R. Couture of Berlin did some finishing touches, including putting down mats of Curlex II on the berm and completed the swale, seeding both with winter rye and conservation mix, fertilizer and pelletized lime. Some saplings will be planted in the spring.

Couture workers leveled and smoothed the entire construction site. Waddell said he had walked over the site on Saturday and, knowing the weather forecast, was very pleased with how it looked.

Both assessing clerk Michelle Lutz, who also serves as clerk of the planning board, and town clerk-tax collector Carol Porter presented preliminary budgets. As was true of last week’s budget presentations, policy and long-range plans dominated the discussions.

Townspeople cannot take advantage of the full range of information that the software that the town’s assessors, KRT Appraisers of Haverhill, Mass., can provide because the town still uses its longstanding mapping system.

This means that some of the boundary lines, especially on the town’s outskirts, do not line up accurately. Because of this flaw, Gorham taxpayers cannot see all the information that could be on the computerized tax cards, Lutz said.

This can only be achieved if the town spends the money to get new digitized maps, likely by employing new LiDAR (Light Detection and Ranging) remote sensing technology. “We need to have a written description of what we have now and what we’re missing,” Waddell explained.

He asked Lutz to get some “real-time” estimates on how much it would cost, so the board can decide whether or not to request the needed dollars at town meeting.

LeBlanc asked whether KRT is trying to let homeowners know when assessors will be in their neighborhood working on the 25 percent cyclical “pickups” that ultimately could affect what they pay in property taxes. The ads that are usually placed in local papers did not always get sent out from her office this year, she said. She also noted that not everyone whose assessed valuations had been changed were notified.

Soon Lutz will be assisted for 20 hours a week by a paid over-55-year-old “volunteer” under the ABLE (Achieving a Better Life Experience Act of 2014) program, thanks to the efforts of Finance Director Kathleen Frenette.

Lutz, as well as planning board chairman Paul Robitaille, who was present as a paid clerk taking minutes, also discussed the need to budget $9,000 in order to contract with community planner Tara Bamford of East Thetford, Vt., to update the town’s zoning ordinances. She and the board have almost finished the town’s master plan, and are ready to take on a major task for which legal advice may also be needed.

State law has changed, making precise definitions far more important, Robitaille explained. Because of climate change, more questions must be asked during the site plan review process. “We are having 100-year-floods and storms, he added, noting that the economy also changes much faster than previously.

The state has changed the rules that apply to lot sizes, Waddell said. The town would be well-served by rezoning some of the huge unsubdivided lots, such as a 3,200-acre Libby lot, off Lancaster Road.

Only a very limited amount of the town’s acreage is zoned Residential B (1-acre lots) and Residential A (1/4-acre lots, usually served by town sewer) and both Commercial A & B.

“We could, in the long run, add a lot of value to the town by rezoning,” Waddell explained. This does not mean, he clarified at meeting’s end, that properties now in current use would have to change their status, if their zoning designation changed. Public input would be sought at meetings as well as hearings, Waddell said.

Robitaille pointed out that downtown Gorham is now busy and that zoning tweaks could help increase its vitality. Today’s millennials are seeking walkable cities and towns where residential property is more concentrated and sprawl discouraged, he said.

“We can’t reach our goal of having a tax rate of $25 per thousand if our valuation doesn’t go up,” Waddell concluded. The next planning board meeting is at 7 p.m. on Dec. 12.

Porter is seeking an increase in salary for both her town clerk and tax collector duties.

There are four elections planned in 2020: Primary Day on Feb. 11, announced by the Secretary of State earlier that day; town meeting, which includes elections of town officials; state Primary Day on Sept. 8; and the Nov. 3 presidential election.

Town clerks across the state now routinely include a possible unforeseen election day, so five elections are budgeted.

The town budget hearing had been set for Feb. 11, but will have to rescheduled, said town manager Denise Vallee.

The town voting machine is in good shape and there is a standby backup machine, Porter reported.

One of the selectmen’s top priorities in trying to rid both the town clerk’s vault and a second vault of all materials that do not have to retained to meet the requirements of state law or local history.

Waddell pointed out that he had done a big job sorting through records when the town hall building was renovated a decade ago, but that all storage boxes should be marked with what is in them and when, if ever, they can be shredded or burned.

“Close town hall for a day or two, but we need to make order out of chaos; we need to develop policies and procedures, and we need to have multiple eyes look what’s in those stored unmarked boxes, so we don’t make mistakes,” the chairman said.

The selectmen asked Porter what it would do to her workload if she were to become responsible for selling garbage dumpster decals for the Department of Public Works. Everyone agreed that because she is bonded, her office is the logical one to handle these kinds of relatively small cash transactions, similar in many ways to issuing dog licenses.

“This has to be decided through the budget process; we need to puzzle it out,” Waddell said. “Only town residents, including renters, and landowners will be allowed to buy a decal.”